I’ve always had a suspicion that Mountain Biking is really something rather simple, made complex by marketing fiends pedalling pointless upgrades on some gold-paved trail to cycling nirvana. Countering this is the assertion that any bloke staying trail side up is essentially a cycling God who has hit the tyre choice/stem-bar combo sweet spot, and is therefore impervious to either criticism or improvement.

I say ‘bloke‘ because there is a strict male taboo over even the tiniest admission of poor performance in any of these three three locations; car, bike and bedroom. A link has been forged between fitting expensive new parts inside and technically accomplished riding outside. Trail snobbery – in too many places – confuses how you ride with what you ride and that can’t be right. Tony Doyle of UK Bike Skills is trying to take riding back for the riders, and our day with him was quite different to an outwardly similar experience a few years ago.

That course was all about locating my riding Mojo which had been lost, along with a chunk of knee, in a big crash. This time around, I was hoping to break through a skills ceiling into which my riding has been banging against for too long. I have exchanged ragged for fast and coping techniques for trail skills to the point where my options narrowed to slowing down, having another big accident or learning how to ride properly. I thought I’d try the latter.

Tony is a passionate character with an interesting history including bike racer, North Shore lunatic and long time corporate coach. His approach is an enthusiastic mix of simple theory, clear demonstration and concise feedback. Before you can learn anything, first there is the group-humiliation of a “skills check” where we all rode over small logs and around figure eights. As usual, we all tried hard but achieved little, with Nig being the stand out rider in terms of technical skill. And he fell off. Twice. On flat ground.

Undeterred, Tony explained that our collective rubbishness would somehow bear sweet trail fruit come the days’ end. To get us there, he spent the next four hours taking every thing we thought we knew about how to ride a Mountain Bike and carelessly pitching it into the forest. A place where a few of us followed while trying to unlearn much vaunted trail skills that had no place in Tony’s world of ‘just riding bikes‘. He showed us how the trail has a bounty of velocity which can be happily stolen by those with timing, body position and commitment. A marker here – Tony teaches four basic physical skills and a similar number of mental techniques which I’m not going to document as they’re a) pretty bloody obvious but b) entirely anodyne unless someone shows you why. 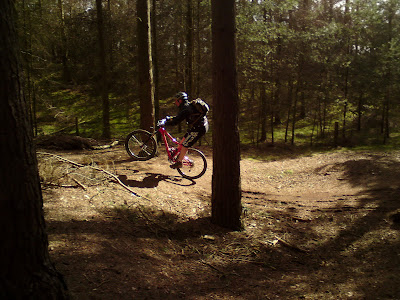 And we’ve all been focused on how. Bad, bad mistake. The plethora of How to DVD’s and endless magazine articles preach conflicting ideas and play into those greedy marketing hands. Anyone reading this who can ride a bit can do exactly that. Ride A Bit. One of the most instructive things I saw all day was a random rider shooting the trail we were sessioning and despite his “look a me” trail jump entry, he was properly rubbish. Too fast in, too much braking, too slow out, no flow at all. Bit like you and me eh?

One thing I have learned is that riding is really simple if you do it properly. Nothing more than physics and geography perfectly aligned. If you let your brain have its’ head, burn a couple of basic moves into muscle memory and trust that this stuff will work even when your instinct is that it cannot, then you’ll be smooth, safe and fast. Tony gains that trust through a series of “Shit, that really works” exercises and some tiny setup tweaks that completely change the way you interact with your bike. Any bike. At no time in the day was I concerned about tyres, frame configuration or suspension set up. I was too busy deconstructing my riding and starting again on a path littered with partial epiphanies and much giggling. For example, pumping trails should be simple but I’ve ridden 15,000 miles over ten years and I’d no fucking idea at all to be honest. No that’s a fib, I had many ideas – most of them conflicting and all together quite properly wrong.

When you feel your front wheel going skywards without the normal associated bar wrenching, the whole concept of trail riding become significantly more interesting. Because that’s what we do ; ride trails, we don’t huck 30 foot gaps, hit a set of six dirt jumps or launch a building sized drop. We did ride some drops thought but my misplaced confidence in ability honed on some big fellas was mitigated by having to unlearn everything that used to work.

More is less, no pelvic thrusting your arse over the back tyre, no wheeling off drops, no – well – drama. Eventually Mr. Brain overrode Mr. Instinct and we moved on moved on to my trail nemesis – corners and specifically long sweeping examples similar to the ones where I’d torn my knee apart. I’d been meaning to explain this to Tony and ask him for a fix or a cheat, but I am glad I didn’t as it is a stupid question.

Because if you aren’t staring at the apex waiting for the tyres to slip, the shape, size and radius of any corner is irrelevant. Only your speed, your commitment and most important where you are looking have any relevance. It is very odd, getting your head up and looking into the next corner while still being deep in one arcing the other way. Odd, but ace, fight the urge to up your entry speed, and feel the acceleration as you exit the turn. Oh, and don’t brake.

Braking only happens outside “Sections“. A section can be anything; turn, stack of roots, drop off, tricky climb, whatever. Hence not a lot of point in a “Fools Rush In” approach as it wastes energy, you’ll have to brake so losing that speed, and you’ll be ideally set up for making a right hash of whatever is in front of you.

Knowing that is my normal modus operandi, I really enjoyed the first two corners both 180 degree sweepers which’d normally have me threepenny bitting round. It felt slow until I saw the video recording and then it looked fast-ish but most importantly smooth. Couldn’t believe it was me riding really. Tony asked what we thought about the big root section between the two corners, but none of us had even noticed it. That’s what happens when you get your head up and look at what you where you want to go not at where you don’t. We strung together every section and finished with a few runs top to bottom, ending is a one metre drop nailed in my head before I’d even picked my bike up to ride it. Definitely would have given me pause for thought at the start of the day. Physically we’d ridden about two miles, but mentally I was shot away so Tony stopped us before we hurt ourselves, leaving us with a warning that with increased speed comes increased responsibility.

So Biking God now am I?No of course not, because I’m still working with a very limited set of physical and mental attributes. But ask me instead if I am a re-invigorated rider? Oh yes and some. I’ve had some brilliant days on a bike over the years, and this day will absolutely ensure I have many more.

I am like that kid with a new bike for Christmas. I just cannot wait to get back out into the woods and look at the trail in funny directions. If you’ve money to spend on your bike, I’d heartily suggest ignore pointless upgrades and spend it with Tony who will make you a smoother, faster and safer rider and change the way you enjoy the sport for ever. That’s got to be worth more than a carbon bar.

You can catch some short video and Tony’s commentary of our day here.