The chronology of madness amuses me, so I’ve left 2020 and 2019 down there. Even if there is not much in the way of coherent argument or well researched rationale to justify the revolving ShedofDreams(tm) door accelerating to turbine velocity.

Let’s make something up instead. Firstly:

What came into the shed 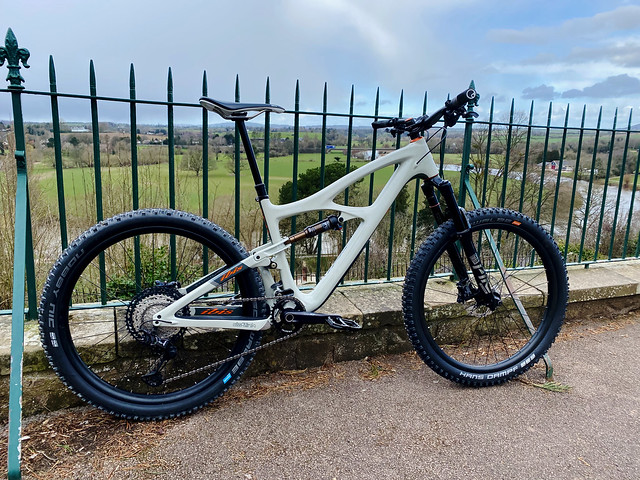 Ah the Mojo4. Never meet your heroes and all that. My Mojo3 definitely took my riding to another level. I mean still bang average, but just a little bit closer to not too bad. The ‘4 felt like it was taking me the other way. Which, considering the epically high hopes I had after finding the last one in the UK, was a disappointment to say the least.

If you want to read more, there’s some excuses on this page. Short version it swept in with March’s spring leaves and departed in a leafless November, because of the… 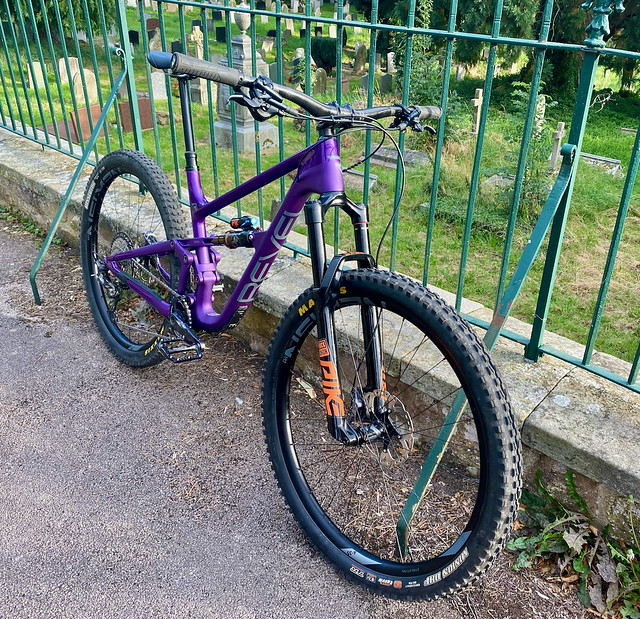 Delivered on my Birthday and built a day later. Same travel as the Mojo, similar geometry, on point Californian ‘mud blind’ pivots and not that different to many trail bikes I’ve owned.

Somehow tho it’s somewhere between fab and awesome. In the same way I totally failed to get on with the Mojo4, me and the Purple Princess gelled pretty much instantly. I mean, sure, you can’t ride it in winter but I’ve other bikes for that. Some of which I already owned. Although not this one. 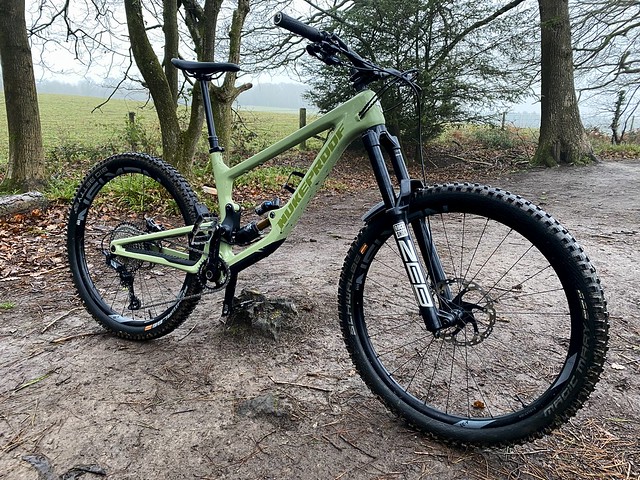 More travelled than Alan Wicker (look it up young people). 180 at the front and only 10 less at the back. Writing cheques (yep you’ll be googling those as well) I clearly cannot cash. But wait, is it just a weighty trail bike with a few more tricks up its sleeve?

Far too early to tell. Bought the week before Xmas, ridden a couple of times since. New bike glasses still jammed to my grinning fizog. We shall see, however there were consequences we need to discuss..

What left the shed 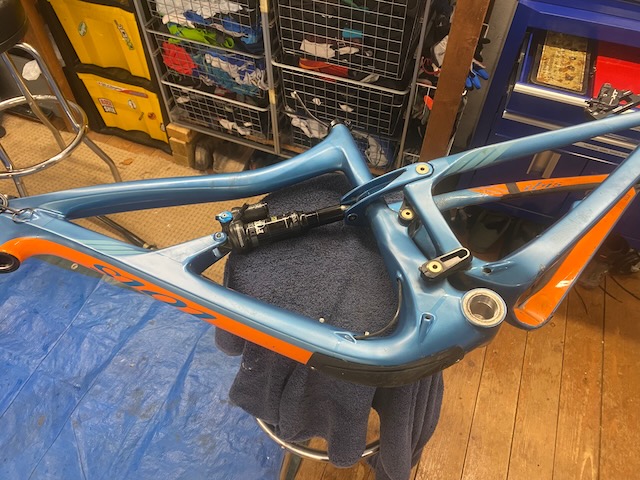 Don’t panic, it’s still in the shed. Well more in the rafters but definitely not left the building. I couldn’t do that. It’d be like Fedex-ing a child to a war zone with no return address (tempting as this is, apparently it’s borderline illegal. I know I know, world gone mad eh?)

But we needed parts and there were many hanging off the blameless RipMo. The good news is the spares pile represents almost an entire bike, so we’ll be building it back up soon. Not quite sure what I’ll be using it for, but – worst case – it’ll provide an excellent Zoom backdrop.

Still after 4000km including Finale, Sospel, Malaga and the Sierra Nevada’s I don’t think we’re done yet. 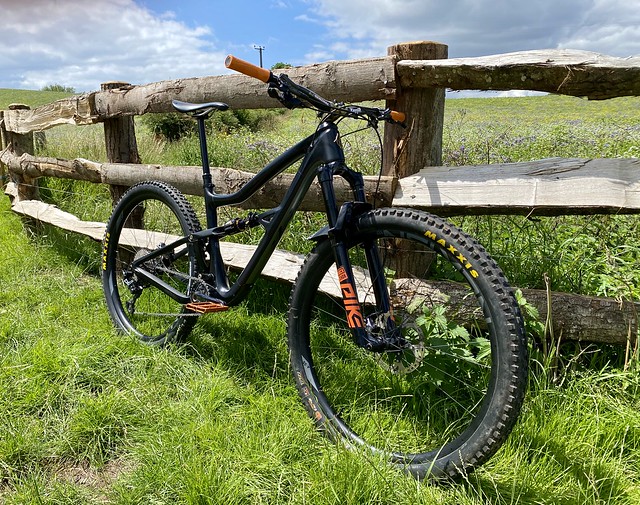 Let’s cut to the chase. We never got on. Regardless of how much money I spent on it. Still those parts did end up on the Rascal so not a total loss. In fact not too much of a loss at all, after a bloke I’d sold a bike to 10 years+ back asked if he could buy it.

We agreed a deal and he loves it in a way I could not. So a happy ending really. Which isn’t quite what could be said for: 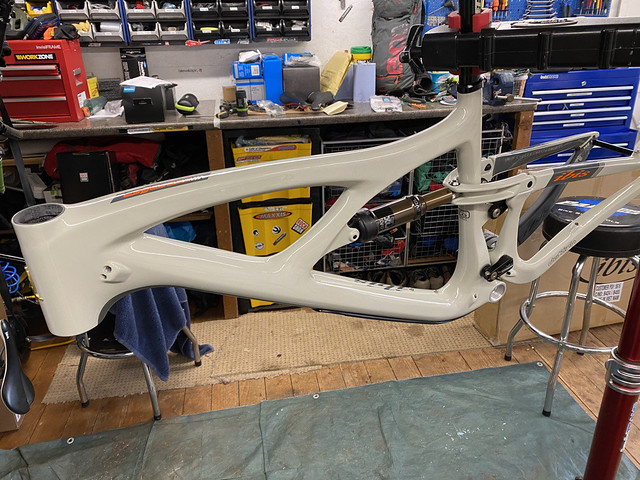 It left as it came. Just a frame. Only with significantly more disappointment. Wheels and forks went quickly, frame took a little longer but the fella who bought it is having a ball riding it, so again a good result.

Maybe it was the 27.5 thing, I dunno. Whatever out of four Ibis’s I’ve owned (three at the same time!), the last two haven’t really worked out. 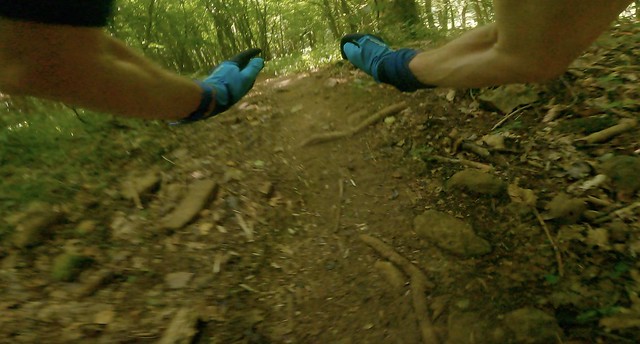 It’s been fab. Yeah well there was this crash, but can’t blame the bike for that. It’s about to be pressed back into service for the winter slop. It was still fun the few times I took it out in summer, except when I ruined my wrist about 1/2 second after this frame, which meant.. 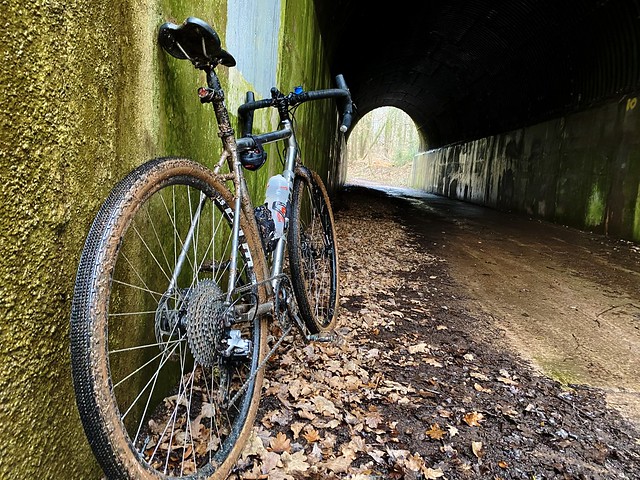 Hasn’t had as much riding as it should have. We were due to embark on the King Alfreds Way in 2021. Two attempts. Two failures, first due to weather and Adam being injured, second after the above crash 4 days before the rescheduled start. Next year then.

I did add some new bars and tape tho after crashing it on a fab gravel ride with Ads on a sunny October skive day. I also rode in in slop and hard packed dirt because sometimes the best bike is the one you don’t need to transport anywhere.

I still have the Boardman CX bike. It’s still gripping manfully to the Turbo. Another 2000+ KM and it refuses to die, or require any maintenance other than wiping down with a damp towel.

I’ve sort of written off the Trailstar as Glynn borrowed it 3 years ago and I’ll never ask for it back.

2022 tho. Ah what a year we have planned. More of that to come but if the global pandemic would like to bugger off and leave us alone, that’d be lovely.

Oh I updated the spreadsheet you’ll find down there. It’s not looking any better if I’m honest. Might be time to admit there is no grand bike buying strategy 😉

Lies, excuses and occasional honesty for all the above can be found here

Firstly I’ve left 2020 down there. Because I totally forgotten about that spreadsheet and it’s a thing of beauty. Also it’s out of date.  But not by much, let’s do a flyby on the ShedofDreams(tm) and see what’s changed. 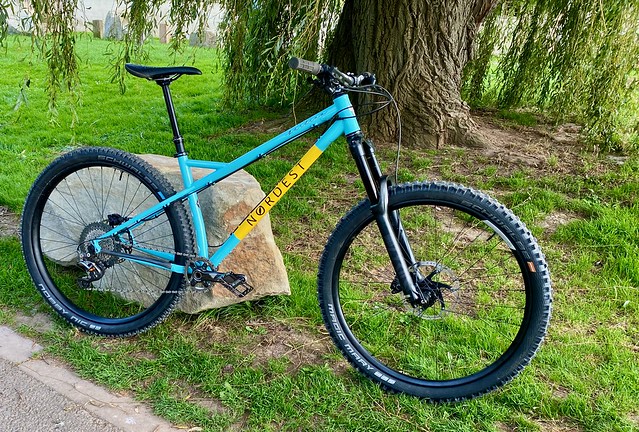 The ‘Trail Fairy of the Canaries’ (yes it needs some work) entered the shed late summer. It’s a Taiwanese frame designed by an ex enduro fella in Tenerife. Designed for a 160mm fork, this steel-y wonder is *a bit* like a bike I already owned. 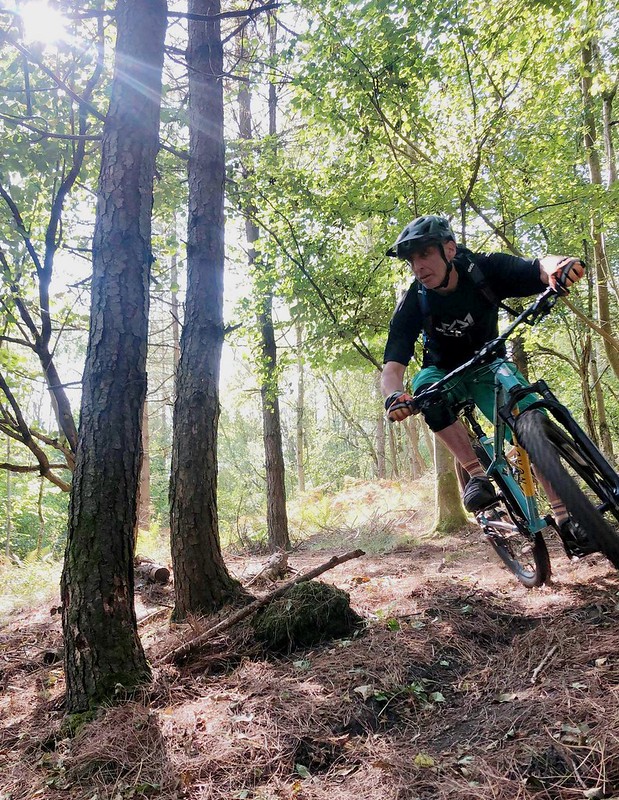 Still not point dwelling on that, it’s been an absolute riot and I’ve ridden nothing else since October. Which means it’s very very dirty.

That other bike I owned? The Solaris Max of course (try and keep up at the back). Now reconfigured for Jess at an all in cost of £40. Austerity in the Shed? Only for other peoples bikes 🙂 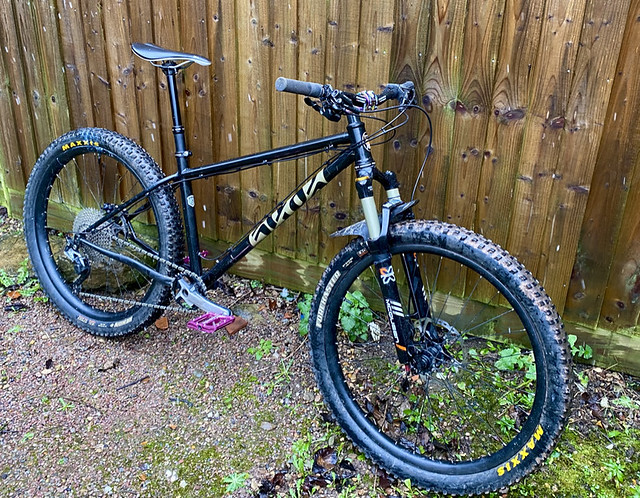 As for the rest, the Ripley has had way too money spent on it, so after checking my bank account I’ve declared it ‘perfect’. The RipMo has had no money spent on it and it’s still pretty damn close to perfect as well. The Gravel bike has hardly been ridden but it’s had some new wheels, which makes perfect sense in my head.

The Boardman remains chained to the turbo. As do I rather too much of the time with 2000 of my 6000km ridden this year racked up in the pain (well mild suffering and lots of whinging) cave.

The Ripley’s been ridden outside the most but that’s mostly because I was testing new parts on a weekly basis. The Bardino is coming up fast on the inside tho.

Next year I just want to ride in new places and old favourites with my mates and have a beer afterwards. I hope it’s not too much to ask.

Why don’t I just leave this here and retire from the field? 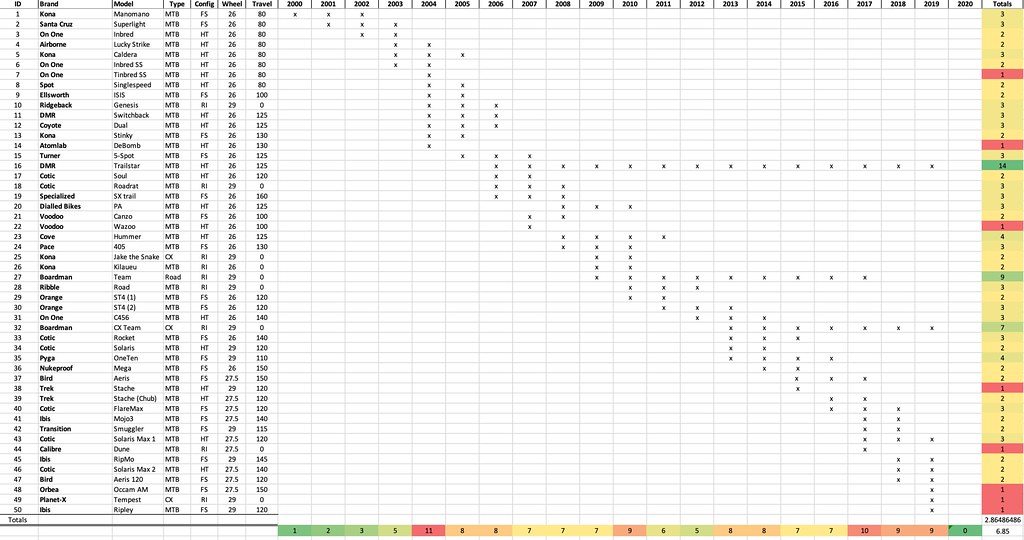 It’s not entirely readable and that’s kind of the problem. 50 bikes in 20 years. Really there’s nothing else to say is there. Other than I’m going to have so much fun doing some proper analysis on that spreadsheet.

It shall tell me many things. None of them remotely associated with fiscal prudence or being a rational human being.

In the meantime let’s move on. We’ve moved on Jessie’s MK1 SolarisMax as she wasn’t riding it and was soon to leave for University. She has whinged about this a bit but hey no garage queens in my shed!

At least it survived more than one iteration of this page. This poor flower wilted under the heat of the ‘I Wants’ and lasted a mere 8 months and 300km. 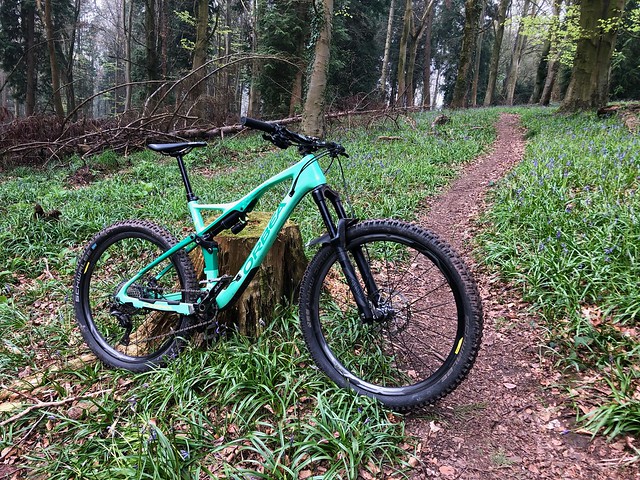 Well I still have most of it. But only until someone buys it. Why am I selling it? Wrong question. Why did I buy it. Because the Bird Aeris LT I’d bought about six months before felt dull and dead. The Orbea was agile and lively. But you know, circumstances.

So with the Bird gone and the Orbea going, this left room for something new. A surprising non MTB entry into the shed added Titanium to my exotic metal collection. 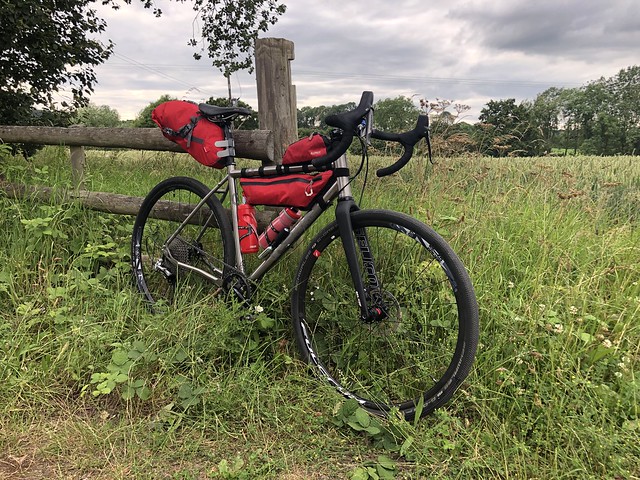 Here in full bike-packing mode. There’s a lot load of blog about that trip. The bike was fab. I’m embarrassed to go on about how much I like it. But it’s ace. Just brilliant. And more brilliant than my CX bike which I could have used. Still that’s not moved from the Turbo. 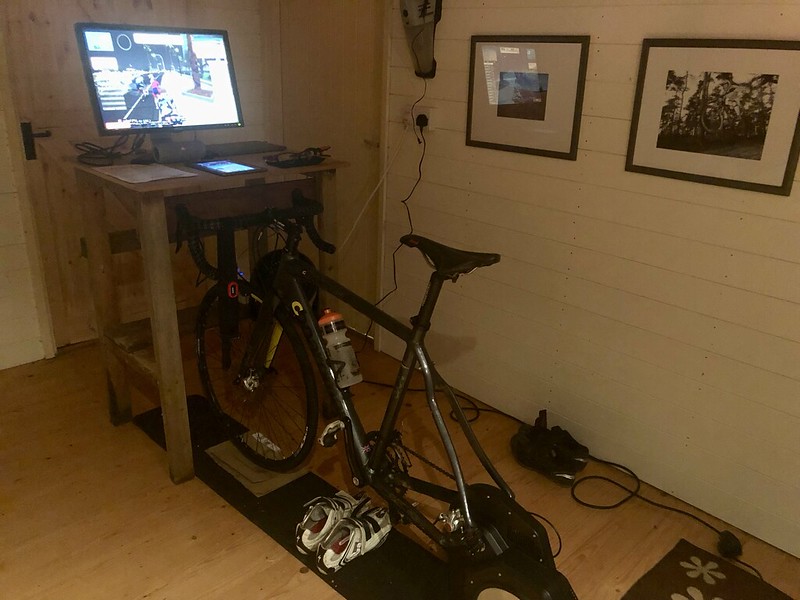 Enough of these drop bar fripperies, what else is left in the Shed? I know, sometimes I go in there and think ‘Shit, when did I buy that?’. Anyway a holdover from last year is, of course, the Mighty SolarisMax V2. 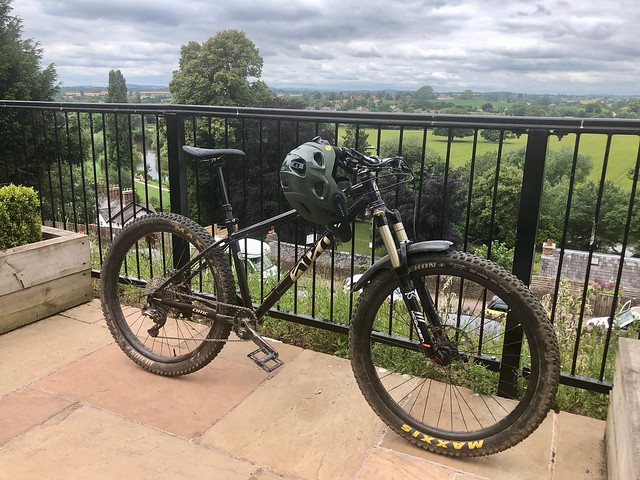 Pictured in the local pub after a dusty ‘night’ ride. It’s been taken further afield tho with trips to Wales for a Black Mountains epic, big days out in the Forest and a few trail centres.  I don’t know why it makes me grin every time I ride it, but as long as it does, it’s a keeper.

As is the mighty RipMo. Saved me in Finale when I ran out of skill, continues to shrug off lumpy geography without making it boring. Nearly 3000km ridden now and absolutely no desire to change it for anything else. Honestly.

Oh look a picture of me actually riding one of them 🙂

And then. Well I got so close to 2020 without buying anything else. But 20% off. That’s a saving. I’m saving money. Why wouldn’t I want to do that. Especially if you end up with this. 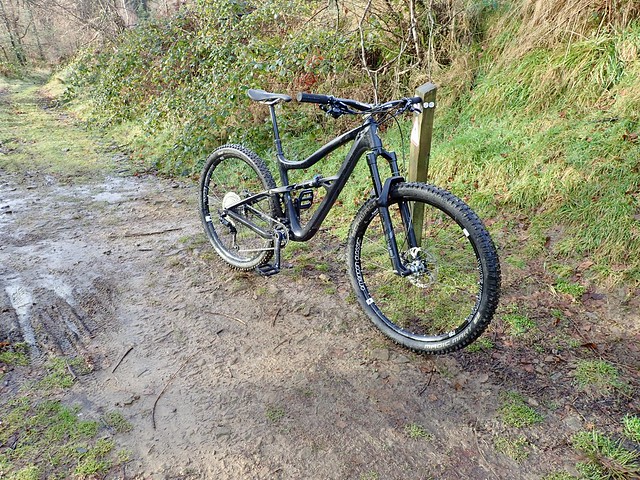 An Ibis Ripley (at a very wet Cwmcarn). Stealth black and not like the RipMo at all. Well a bit. But not enough that I can’t have both. Really looking forward to dry trails, long days and basically dicking about in the woods on this one.

14 thoughts on “Many Bikes, Little Talent”