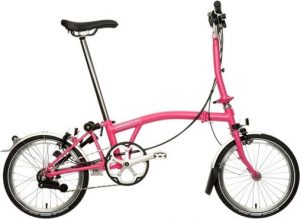 Apologies for the cheesy Channel 5 title but it’s both descriptive and accurate. Today I was properly beasted by a young lady riding the “knit your own cheese brigades” favourite folder.

Having completed the trials section over the Bayswater road (manual onto curb into one footed pedal zebra crossing, finishing with pavement bunnyhop), I’m straight-lining the final section into Hyde park.

At this point, I was confronted by a large mass of hair atop a small pink bicycle. Closer inspection revealed a litheness of body that even a combination of winter clothing and besuited trousers couldn’t hide. History states that our hero (that’s me ok) rigidly applied the rule â€˜never judge a cyclist by their bicycle” and waved her through with a gentlemanly smile. But since history is nothing more than lies multiplied by time, of course this didn’t happen.

I wound up the gear on my proper sized wheel and passed her with a breezy hello. Two things immediately became apparent; firstly my passing speed wouldn’t have troubled a sprightly hedgehog and secondly I had little breeze left in my lungs to shoot. Two surreptitious glances in the next two minutes nailed home the certainty that she was merely biding her time and lining me up for an overtaking move.

This inevitable pass seemed effortless on her part with heeled boots acting as flat pedal SPDs and a spin rate last seen on a decent washing machine. Parable metaphors sprung to mind although I quickly ditched “beauty and the beast” in favour of “the tortoise and the hare” For the hard of understanding, I did not resemble the rabbit.

So I switched tactics and decided that if you can’t beat ’em, cheat. Gracefully admitting defeat wasn’t really an option even though she didn’t care at all and I cared far too much. Especially when opportunity knocked for the man skilled in the art of traffic light phasing. The fifty yard gap she’d opened up narrowed to almost nothing as she was caught by the red on Hyde Park Corner.

Not quite nothing though as I’m counting down the seconds to amber and so still rolling. Three, two, one, GO; dodge the obligatory loony cager jumping the now red set and steam on towards Constitution Hill. She’s taken the sensible diversion under the arch, but the phasing is still with me and I’m cranking off the roundabout before she’s even granted access via the pedestrian crossings.

Backing off a little, I’m impossibly smug until a random glance left shows the pinkly transported hair bear bunch steaming down the Green Park cycleway, cutting a swathe through joggers, dogs and the odd stunned tourist. My phasing karma is exhausted and I’m held frustrated outside Queenie’s house, while my quarry disappears up the Mall. This is silly I tell myself, London hosts tens of thousands cyclists most of them with skinny tyres, clipless pedals and road frames. You can’t ever win; the best you can hope for is to stay alive.

But underneath this superficial layer of common sense lies an ugly truth. This folding fanatic is none of these things, she’s a woman riding in street clothes on half a baby’s stroller. And she’s whupping your arse. Not literally of course but that fantasy keeps me occupied during the further delay as a diplomatic convoy cruises past. That’s the trouble I tell myself, this wouldn’t even be a contest if I had police outriders.

Finally freed from the lights, I’m desperately but a little despondently cranking away at a cadence we singlespeeders call “demented hamster”. Slack faced roadies, body-wrapped in sponsor’s lycra, barely have time to register shock as the whum-whum-whum of my steaming knobblies warn of a screaming tortoise coming through. The lights are clearly in league with my folding nemesis now as, in spite of my best efforts, the next set inexorably flash off green in favour of amber. F*ck it, time for a bit of RLJ’ing and to hell with the consequences.

I can see her now still serenely making rapid progress on the cycle path but this tortoise has one more trick in his shell. London’s randomly planned cycle paths can play their part in my victory, as I’ve set the nominal finishing line at Charing Cross station and there’s no way to get there on the path. Oh no, the cyclists lot is back onto the blacktop, wiggle under Admiralty Arch and fight their way across Trafalgar Square.

She’s trying to merge now and I could have so easily have let her. A gentle pressure on the bar and a friendly wave and she’s in and gone. Like that was ever going to happen â€“ I shift right but only enough to allow an irritated roadie to occupy the exact spot where she’s trying to plant her front wheel. She’a trapped now as a phalanx of cyclists compress the space and slow to navigate the arch.

My triumphant glance, which she haughtily chooses to ignore, almost results in a Taxi door becoming a painful part of my immediate future. But it doesn’t matter, I’m still on the move and she’s still on the pavement. My minds eye paints a picture of a final sprint under Nelson’s Column, arms “Armstrong like” aloft and accepting the accolades of my cycling peers. Another amber light blocks my way to victory but I’m past caring about any niceties of the Highway Code and swoop gracefully onwards, a legend in the sport of commuting, a man completely at home in this urban environment; in short a winner.

Remember history? It was the metaphorical spoke in my deluded narrative. Instead of gambling with amber, I’ve pulled a terrifyingly unintentional stoppy before slamming the bike down about one inch away from a pretend policeman. Unbelievably they’ve chosen this day to hand out patronising warnings and thirty quid fines to any rider still alive and trying to stay that way. I’ve always thought of red lights as interesting and informational but hardly mandatory. Clearly they disagree.

I’m receiving a wide ranging bollocking starting with the problems of aggressive riding, finishing with the importance of respect and passing through my many other transgressions in between. I smile and nod occasionally secure in the knowledge that my helmet hides “Green Day” ridiculing the establishment on my earphones.

She pulls alongside. At least she has the decency to look pissed off. It has better be with me considering all the effort I’ve put in. The plod-lite has finally rambled his last and I’m preparing a witty, condescending yet friendly response to her icy glare. It was to be in the vein of “good effort love, not bad for a girly but blokes are the best at sport, that’s just the way it is”.

While I’m hosting an internal Debrett’ debate on whether “love” or  “darling” is the most appropriate form of address, the lights abruptly change and – frame visibly flexing – the pink hair palace leaves me choking in her hairspray. I’ve never seen anyone cycle-angry on the Strand before; well not and survive until Fleet Street anyway but today is just one long voyage of discovery.

Can I have at least close second then?

11 thoughts on “When bromptons attack!”