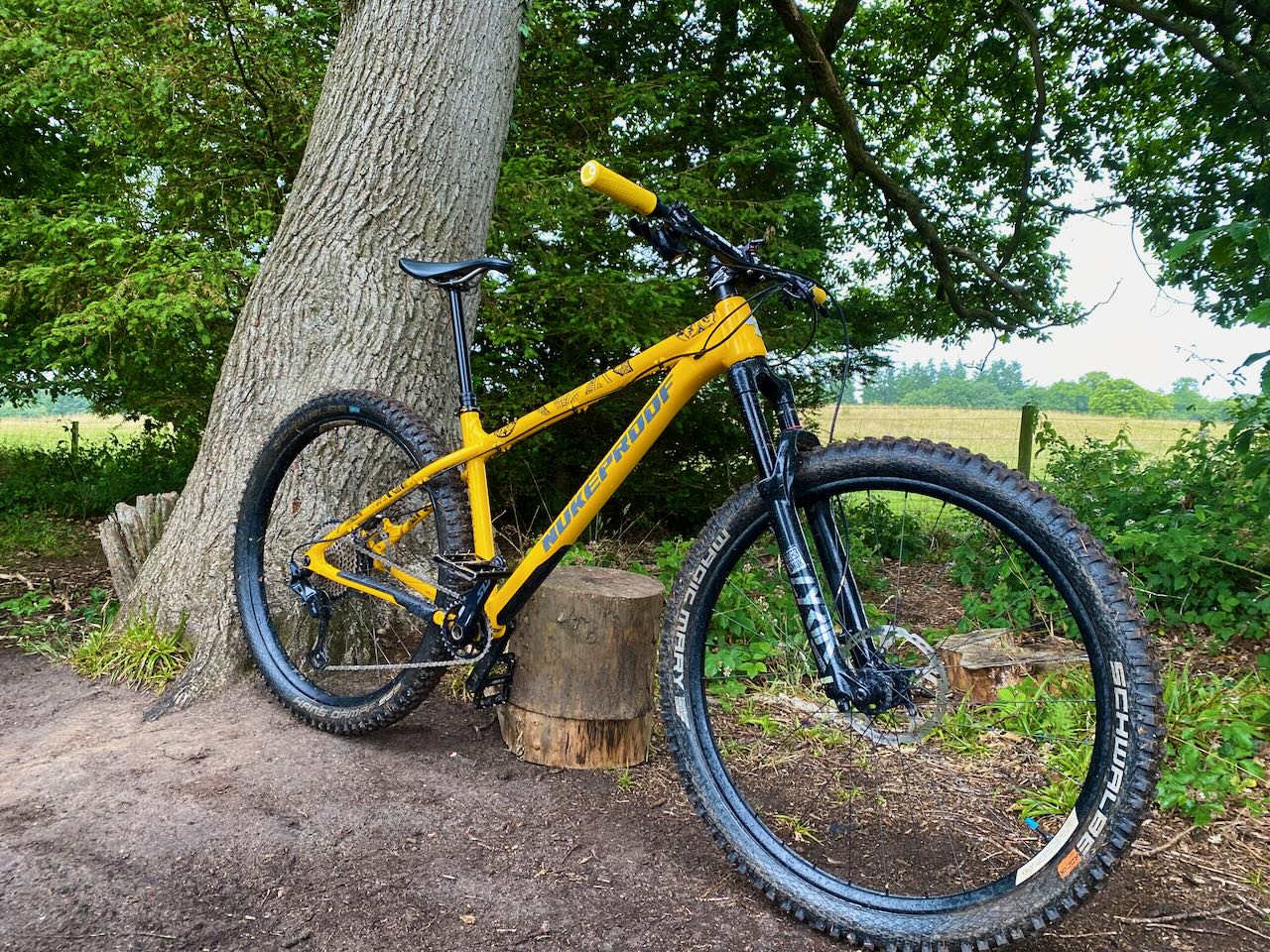 Oh a new post. Not many of those recently.  Content being a new bike. These come at a frequency not aligned to any kind of writing cadence. Which is as closely related to my time impoverishment, as it is to your fading interest in my allegedly far sighted shed acquisition policy.

Yeah about that. There comes a point* when joining the dots between what came before and what’s in front of us is – on first glance – something between a Fibonacci sequence and a random number, But, as any data geek will enthusiastically explain** regression to the mean is where you’ll find to cool kids.

What that mean means is we circle back to things hiding in a normal distribution. In my case this means hardtails short of vertical stature, not stupidly long out front, not pointlessly chopped out back, head and seat tube angles within a standard deviation of progressive, clearance for chunky tyres on wide rims and a firm nod to winter clearance.

So very similar to the Bardino then. Sure similar measurements but different frame material. I’ve ridden steel hardtails for the last decade so trading ferrous for alu saved a couple of pounds but risked my knees. Everyone*** knows 6061 tubes are essentially arthritis in tubular form for a man of a certain age.

I’ve always like the Scouts tho. This third version ticked all the boxes for a playful bike to be chucked down local trails in summer dust and then hidden underneath a thousand versions of muddy crap come the winter. Sure the previous hardtail performed flawlessly in this role for the last two years. It wasn’t yellow tho.

I’d be lying if the choice of colour didn’t tip me over the edge of falling for a third Nukeproof in barely seven months. Great value, good people to deal with, shit paint. The latter explains the ‘Jailhouse Tats‘ frame protection long lost in a dusty drawer only to be fitted as part of the budget build.

A budget managed almost exclusively by stripping the Bardino of every part other than those yellow grips that exactly one person considers classy ,and a non intuitive less-is-more reduction in fork travel to ‘only‘ 140mm. Matt built it of course, while I was many miles east and south on holiday.

I threw a leg over it on the back of a very long travelling day when I’d eaten not much and slept not at all. This affect on my cognitive processing mostly ensured the rain barely registered as I took in the whole ‘big bird’ vibe it was giving off.  A couple of reviews have lambasted Nukeproof for their lack of boldness in terms of pushing the longest and slackest numbers to, and beyond, the limit.

For me tho, that’s perfect. I’ll stick a couple of braking fingers up to stability at high speed when the payback is a neutral agility not demanding 100% commitment in every turn. Bikes I want to ride rather than bikes designed for how I wished I could.

Still with a 64 degree head angle, a whole load of plush travel up front paired to memory-lapsed ankles and knees out back, it’s not some eyebrow steering race machine. What it is – with 2.6 tyres damped by rim inserts – is just a whole load of fun with pretty much no vices.

And so much grip at the front. The bottom half of the internet predicts fiery death for those devilish to run their tyres at less than 20 PSI. The bikes will not only go round corners but there’s a fair chance of a combustible apex****. Let’s just say this was not my lived experience 😉

I’ve not ridden hardtails much for the last few months. Which means I’d forgotten exactly how much simple fun the are. Simple being the key word here – climb well, accelerate quickly, turn in on a brilliant fork/tyre combo, exit the corner with the rear tyre making all sorts of shapes, launch over stuff with what feels like zero effort while all the time reminding you the contingency if it all goes a bit wrong is you. Not some fancy rear suspension.

You have to love that. And I did. The whole experience from the first pedal stroke to the bollocks talked in the pub is visceral. Everyone will tell you hardtails make you a better rider and maybe that’s true. But they are so much more than that. They connect you to the trail in a way a full suss never does.

But that’s missing the point as well. What they really do is reconnect you to the 11 year old riding their first every dirt singletrack. They take you back to that time when everything was a whole lot more simple. You can’t put a price not that.

Well you can. In the case of the frame around £450. And in the case of this post, Covid-19 means I’m banished to the shed for a few days. Still I can look at that Scout and plot many childish adventures to come.

*a data point. In this case 55 frames. I mean we’re deep into an ironic wink to  “vertically compliant and laterally stiff” territory here. I’ve glossed over all the reasons and run out of excuses. Still here we are again. It’s become virtual therapy.

**trust me on this. Ensure you have access to significant material on statistical theory and easy access to the bar. We’re great on explaining what the numbers may mean, less stellar on noticing if our audience are feigning organ failure.

***2.6 tyres at 14 PSI > any frame material properties perceived or proven.