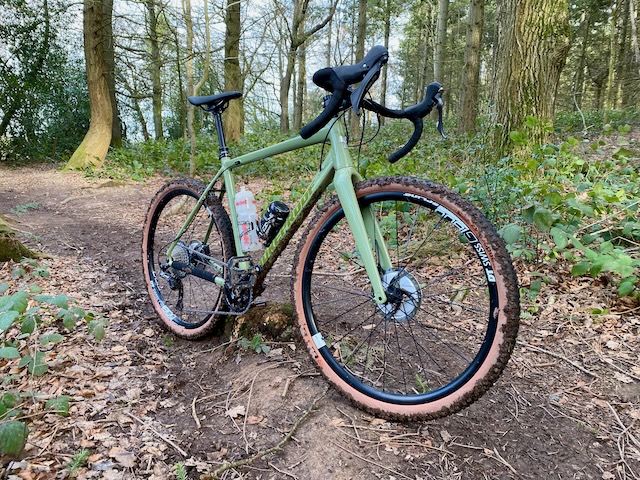 I don’t want you to get distracted by that image up there. Even while accepting that  a cursory glance suggests yet another bike crowding the diminishing floor space in the shedofdreams(tm).

Conclusions are assumptions, but context is everything. Well something anyway. Maybe an excuse thing. Whatever this isn’t N+1, it’s merely N, a holding pattern, more of the same but a little different. A day before whatever that is arrived, something far better defined left in the hands of a very happy man three days short of a significant birthday. 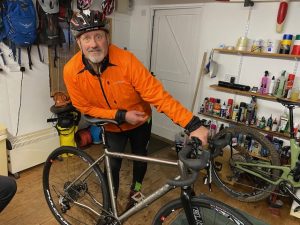 What has he bought? Previously we’ve described these triangular garments, entirely failing to clothe the emperor, as last century’s mountain bikes wrapped in shiny marketing cloth. That holds regardless of their party trick is being pretty damn good at a lot of things, and amusingly useless at a few others. In a time of no bad mountain bikes, this is to be celebrated.

We came into the sport as silly. Seriousness is not something to be applauded. Riding excitedly to your local woods, playing between the trees before trudging home with a bloodied knee is exactly how your eleven year old cherished their spare time. So more of that can’t be a bad thing, right?

Yes, Al maybe/possibly/what the fuck are you talking about? Get to the point – what is this new thing and why’s it replaced something that looks – at first, second and forensic glance – pretty damn similar? I’m glad you asked. No really I am, as this is not just drunken purchases disguised as a grand strategy.

Nobody who rides mountain bikes with any level of obsession would allow ‘well they’re all the same, why do you need more than one?‘ to pass without a vigorous defence probably including complex charts, longitudinal analysis and peer reviewed research. *

So it its with gravel bikes, or whatever we’re calling them now. We have road bikes with a nod to imperfect surfaces** and mountain bikes Frankenstein’d into drop bar mutants. Grade them on a curve and the Tempest was a refined, comfortable mile muncher, while that green monster prefers to paw away at raw soil before thugging its way through the countryside. 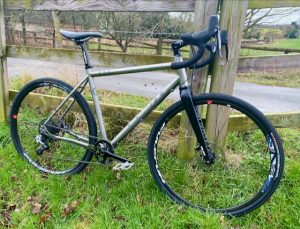 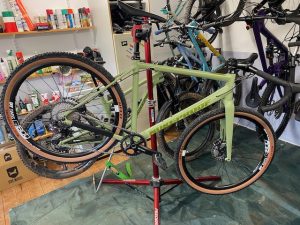 Look closer and there are many differences; frame material, wheel sizes, head angles and other items of irrelevance. The important disparity is intent. The Tempest wants to pick a distant spot on a dusky horizon and navigate there via interesting paths. The Digger (what is it with me and stupid bike names?) tolerates a bit of tarmac, but what it really wants is to hunt down an enduro bike and poke it with a stick.

The Tempest is background, the Digger is front and centre. It needs to be ridden, it’s not interested in being out all day, it’d rather rip your legs off, scare you shitless and then drop you off at the pub. Which is  absolutely brilliant for a mountain biker looking for a bike to make the local woods a bit more interesting.

Unless the same individual was tilting at a third attempt at a multi-day self supported King Alfred’s Way in less than two months. I used to have the perfect bike for that. Until yesterday but now I have something else entirely. There’s a hurtful rumour my purchasing criteria was based on ‘I‘ve already got one that colour’ and ‘last years model is going at a heck of a discount‘.

Regular readers will back me up that such salacious gossip is entirely at odds with my unimpeachable integrity, ruthless logic and legendary fiscal responsibility***

Regardless it’s been pedalled out to those local woods which was perfectly fine if a little slower than previous drop bar bikes. The payoff is picking lines on muddy singletrack when you reach that destination. Wide bars, knobbly tyres, dropper post, this really is an MTB hiding in plain sight. 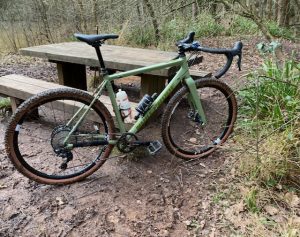 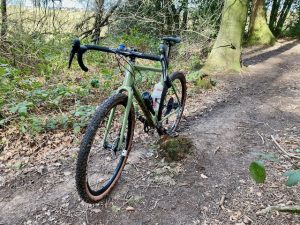 It’s fun on easy trails in a way that my 160mm hardtail really wouldn’t be. There’s nowhere here I’d bother dragging the full-suss bikes for. But an hour on muddy trails going mostly sideways with a big grin on my face? Lots more of that please. Yeah sure that was the same face accessorised by new bike glasses. But even so, it’s quite a thing and if my thing is 90 minute escapes from this long-stared pane of glass, then it’s my new favourite thing.

For now anyway. As Herefordshire’s undisputed “Mr Fickle‘ for 14 years running, who knows if my fruit-fly attention span will bridge the gap between new and bored. I’m ever hopeful. And possibly delusional.  Let’s try working a bit less and riding a bit more to find out.

Oh and we’re not done with bike laundry either. A second much loved frame is on the edge of shed and sullied. Still might not happen. There’s a real danger this may become a habit.

**99% of the roads where we live. We’re net importers of potholes. While `asphalt comes here to die.

**Laughing is beneath you. As for pointing, there’s no need. I buy 50 bikes with absolutely no rationale whatsoever, and this is the respect I get. Really, you should be ashamed of yourselves.