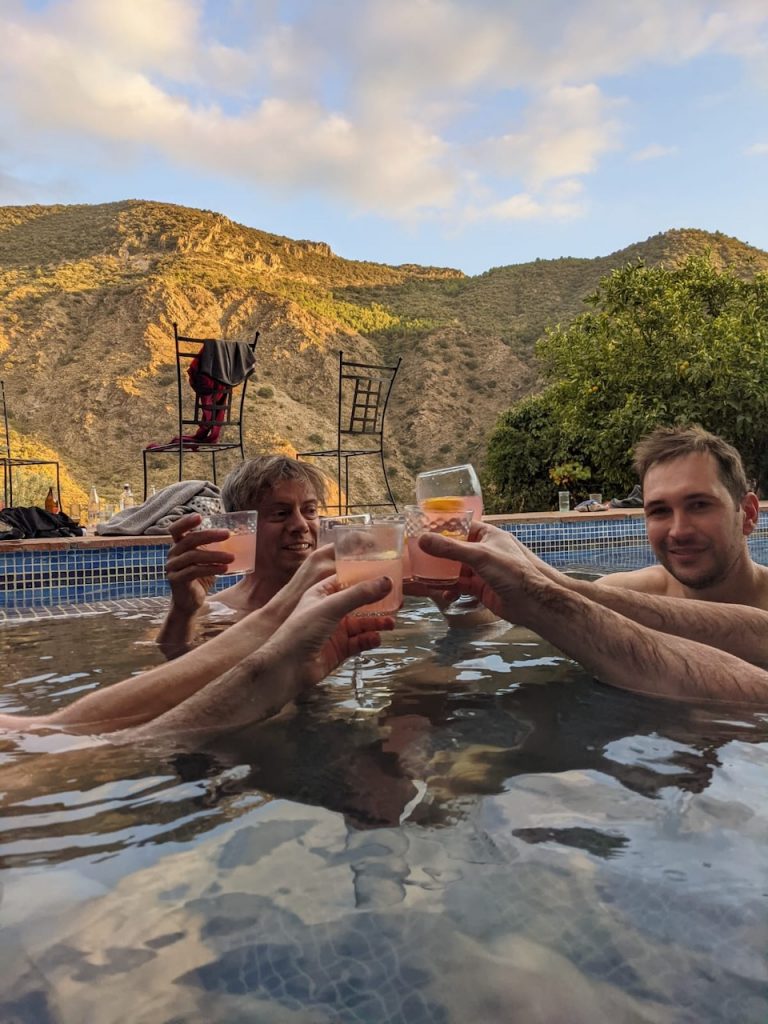 This is the best bar in the world. Yes I’m sure some of you have sipped sophisticated cocktails in high rise buildings overlooking what passes as progress, or risked the local firewater in a far flung shack where the international language is ‘drunk’

But this IS the best bar in the world. A backdrop of the Sierra Nevada’s and – more importantly – one of the best trails in the world. The Elephants Tail etches a dusty scar on the edge of those imposting mountains. After riding that, we dived into the hot tub sharing one of those epic post ride moments, and a decent sized gin.

A gin improved by local pomegranate harvested from a trail we’d ridden about an hour earlier. In the tub are Matt, Mike, David, Si, Em, Steve and me. Names you don’t know and faces you wouldn’t recognise. But that’s exactly my point, these are my friends and this is our moment. I hope you all had at least one of these moments.

It’s an image I’ll treasure because of the continuing shadow of COVID-19 and all sorts of other stuff mostly related to ageing parents. It was a week of escape, and I couldn’t have chosen better people to avoid responsibilities with.

Right, enough of that let’s talk bikes and stuff. Firstly the bike page has had what can only be described as a massive update. My 2021 resolution  to spend absolutely no money on the fallacy that new bikes make a new me failed to survive first contact with reality.

The litany of failure is laid out here:

There’s more. But not much. I didn’t write as much stuff but all that new bike nonsense generated enough content to update the ‘who read what the most’ page.

And that’s 2021 done. Big plans for 2022 while the withered frame can just about keep up with major physical commitments. Time is definitely ticking. Let’s not waste a moment of it eh?