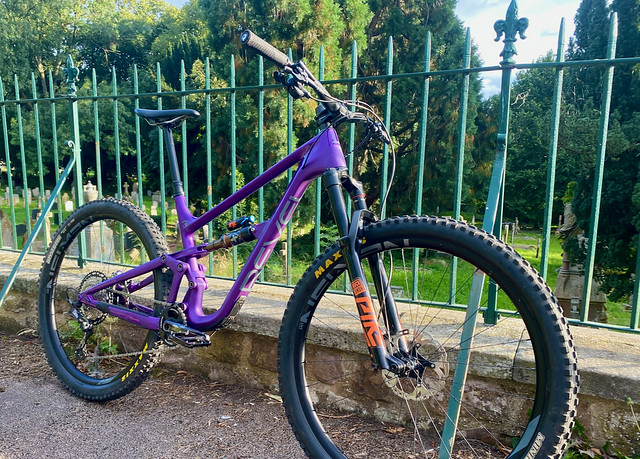 You: “what the hell is that?” / Me: “Look at the colour, it’s a magnificent purple isn’t it?” / You: “That’s somewhat beside the point. It appears you have bought ANOTHER new bike” / Me: “What do you think about the orange highlights, I’m not so sure“. You: “These are just pathetic distraction tactics, admit it you’re just embarrassed by whatever the fuck you’ve bought”

Squirrel indeed. It’s not subtle is it? Kind of hard to hide. Which wasn’t on the top of my agenda when introducing it to my riding pals. “Prince would ride that” one quipped. “Not now, he’s dead, Al’s just really really old” another responded. Supportive as ever then; I waved my hands while loftily explaining this was more than just ‘a not quite dead yet’ purchase.

Faced with arms folded cynicism, I retreated into the numbers. Not those associated with geometry, more the total bike integers plotted against a timebound X-axis. 53 bikes, 54 years old. That’s not a level of imbalance I can handle, and with little chance to physically regress*, a new bike re-established much needed equilibrium.

Only not really. A happy coincidence at best. If ‘Fuck me, I’m sure I was 37 last week, how has this happened and who can I blame?” can be semantically twisted to mild joy. Serendipity was merely a by-product of a new product. The problem was the Mojo4. Well okay, the problem was me, but let’s pretend it’s a bike issue and move on.

Moving on is what we’re all about on the Hedgehog. Via jagging sideways, flashbacks, fast forwards, and all sorts of hooky rationale powering the revolving door in the ShedOfDreams(tm). More like a turbine recently. It was all going so averagely before one thing led to another and that led to what you see above.

Okay, let’s get this over with. Brief history to set context. My first Ibis was the Mojo3. Proper game-changer even for my middling skills. Logically buying another one from the same brand was a fine idea, and so it proved with the Mighty RipMo. A triggers broom of awesomeness you’ll be wrenching from my cold, dead hands.

Repeating this theme would surely continue the trend of right bike, right time. Which is where things kind of fall down. The Ripley wasn’t the right bike at all, and the right time was definitely when I sold it. Which led us full circle to the all-fresh next-gen Mojo. The 4, I mean it’s a number higher, it has to be better.

Spoiler alert. The adverts on various bike forums would suggest otherwise. If you need 950 words of ‘it’s not you, it’s me’, please check out the next issue of www.cranked.cc. Honestly, you should just buy the mag anyway because it’s full of brilliant content.**

So we’re not going to talk about that either. Instead, let us feast our eyes on the opulence of Deep Purple- a bike worryingly close in numbers too many of those languishing forgotten on the spreadsheet of regret. 140mm at the front, 10mm less out the back. Longish, definitely low, moderately slack. Multi linkage suspension design incompatible with 8 months of UK trail conditions***

Rides the same as those tossed in the virtual skip then? No, not at all. Well not entirely. There’s some voodoo hidden in all those pivots. It’s a bonkers good climber- maybe a little better than the DW link bikes I love so much. That’s a hell of a compliment.

It’s pretty light which helps. Another Araldite and string combo artifaced to within an inch of a topknot. Niche or not, downhill it’s a properly sorted trail bike. Everytime I rode the Mojo, it felt like the first time, on the Rascal (yes I know, with that colour I’m only grateful they didn’t call it the ‘throbber’) within 2 trails it kind of disappeared.

That’s a good thing. It also feels like a mini RipMo which is a good thing squared or possibly cubed. Just get on it, show a modicum of bike handling ability, point it at a favourite trail and wait for those endorphins to break down the door. Sure some of this is new bike glasses, a little more is displaced guilt from throwing good money after bad.

But, as has been pointed out on far too many occasions, father time is increasingly feeling like grandfather time. For some reason my birthday last week felt like a bit of an event. It was definitely an alcoholic event but that’s nothing new. No, it was the post hangover sobriety, and a snatched look in the mirror that triggered the ‘life is now really too short to ride bikes I don’t like‘.

I’m lucky enough to finance such selfish nonsense. But tracking Matt and Steve on a favourite Yat trail, all I could think was… well not much really… just that in the remaining days left to ride mountain bikes, I need every one to feel like this.

That’s a piss poor excuse to discard a bike less than six months after proclaiming it the new, best thing. Or replacing it during a two hour ‘what’s next’ buying frenzy.

Sure I get that, but ‘SQUIRREL‘

***this thing has so many mud shelves, it comes with its own stacker!