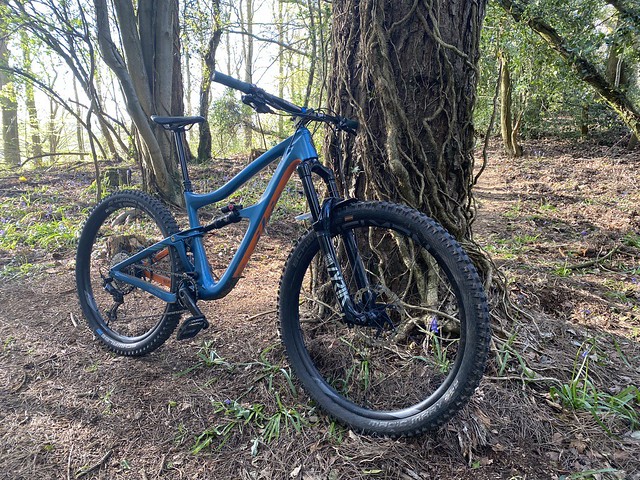 Power of 3. Murf was 13 last week, I turned 53 a few months ago and the mighty RipMo clocked its’ third year in the ShedofDreams(tm) today. It’s fair to say both the Lab and the bike are wearing that age rather better than their owner. The senior dog spends most his time asleep with vigorous activity being reserved for anything food related. At times like this I’d like to reverse the axiom that pets resemble their owners.

The bike retains the boundless enthusiasm which sealed the deal back in 2018 and cemented it’s place in the top three MTBs I’ve ever owned*. While its inherent qualities remain intact, the components transforming that frame from a shiny bit of garage art to a full functioning bicycle are somewhat more mutable.

While that picture and this one look similar they really are not the same. 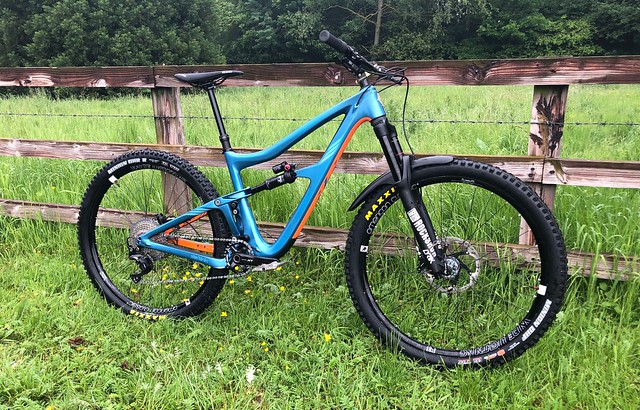 Let’s start at the rear; three wheels, four cassettes, three rear mechs and a similar number chainrings, two cranksets, four sets of pedals, a replacement seat post, a warranty stem**,  new posh forks and a front wheel. We’re not done yet, annual fork and shock services, new shock inners after the originals shat themselves in Malaga, and a final addition of ‘Strict Helga the German Saddle‘. And tyres? Well I dunno, let’s go with ‘a lot‘.

That whole paragraph could be summarised as ‘only the bar and brake rotors are original‘. What’s still missing though is the majority of these changes are wear and tear related. In three years the RipMo has clocked nearly 4000 kilometres across four countries. It’s been smashed down endless switchbacks in Sospel, brutalised by a sodden week in Finale, bashed nearly to death in Malaga and abused on a mostly weekly basis all over the UK.

And still on the original set of bearings and bushings. Which considering it’s designed in Drought County, California is something of a testament to the build quality***. Regardless of the Triggers Broom component stack, the heart of the bike is as it was when I fetched it from a battered box in May, 2018.

If it were a three ringed tree, it’d have notched the passing of time as new and shiny bikes orbited its wall bound status. I never really got bored of riding it, but there was always something new to try instead. Ironic really as in the first six months of RipMo ownership I sold every full suss I owned, including the Ibis gateway drug that was the Mojo3.

Me being predictably me reverted to type and bought stuff that seemed – oh I don’t know what the word is, let’s go with – appropriate. The last of which was the Ripley and we all know how that worked out. Well I say last, obviously that doesn’t include the Mojo4. Because why would it, as that’s an entirely different proposition. Or so I tell myself.

Although not so much this last two weeks. The RipMo has missed the last couple of upgrade cycles what with the new and shiny taking preference. After some post-Ripley bike Cluedo ‘the bike buying idiot in the shed with an XT crank‘, a whole new 12 speed wheel and transmission were slated to freshen up the old girl.

Obviously my skills lie elsewhere so I slotted it into the trailer on the way to a big Saturday ride. Arriving at Matt’s, I decided a second RipMo ride in six months might be quite the thing. Even with it’s mostly knackered gears creaky rear wheel. This entirely failed to stop it being entirely marvellous to the point where I wondered out loud ‘do I really need more than one full suspension bike?‘.

The case for the defence is it’s built heavy with parlance mud clearance. It’s really too much bike most of the time so making trails a bit too easy. What this misses is how much I’ve missed this bike. It’s saved my arse and many other useful limbs countless times. It’s brilliant because it disappears. It elevates me beyond average because it’s just so bloody competent. As a package it’s pretty much perfect in terms of geometry, kinematics and build.

There’s a new version I really don’t care about. What I cared about was buying new bikes that might be better than this old one. Honestly I never found one. Last night there was much briskness and bravery on the Wednesday night ride. Stuff that gives me pause doesn’t stop the Ripmo for a microsecond. Just point it, show a little faith and get off the brakes.

It’s pretty much the perfect trail bike. The median of the three bears. The average of XC and Enduro without ever feeling even slightly average. The only bike I feel fast on even when my head is hard stopped on slow. Honestly it’s so good I’d even let the beer fridge go before I sold it.

So if this feels like a love letter to nothing more than araldite and string, then so be it.  It doesn’t stop me tapping the bars after a great ride and whispering a ‘that’ll do pig’ when no one is listening.

And I get to ride it again tomorrow. Never gets old.

*which is a hell of an achievement when you consider the extensive and bewildering pantheon of bike shaped composites that’ve passed through the shed door.

**Original cracked. Which I discovered the night before an uplift day to a bike park. That check is the reason I still have all my teeth.

***to be fair, Matt’s saved them with an annual service. Even so, that’s way better than a few ‘UK designed’ bikes I’ve had.