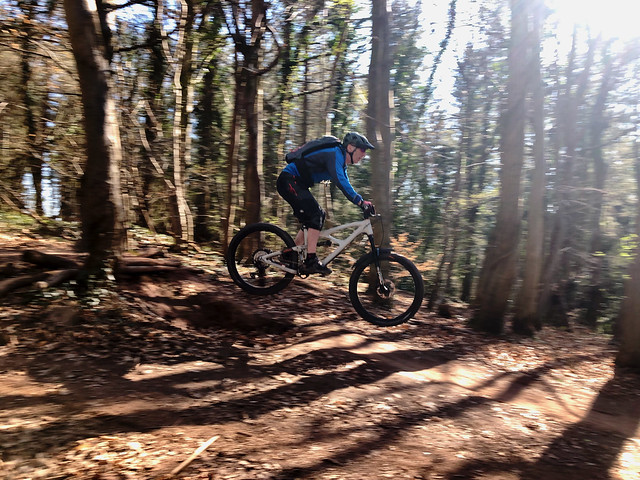 (this gap is fine. It’s tiny. The one in the text below? Absolute bloody monster)

Me to Matt: “I know I’ve ridden them before. But that bloody chute and big sodding gap are living rent free in my head. However good the ride is, it’s pretty much ruined by anxiety and indecision. I know I can ride them, but I don’t know if I want to. But if I don’t I’ll be filled with self loathing. It’s bloody annoying‘

Matt to me: ‘Just ride them or don’t ride them. It doesn’t matter, nobody cares‘.

Matt’s a very good friend and mostly good council. But today he’s straight up wrong. It does matter and I bloody care.  Let’s break this down. YouTube has replaced self-help books. It’s awash with content on how to manage this kind of stuff. If you can’t be arsed to read the Chimp Paradox*, there are bite sized fifteen minute videos of talking heads kind of taking sense.

Derivative reduction leaves you with the mental (“I want to do it“), the physical (“I have the skills to do it“) and the doing (“I will fully commit to it“). Nestling in the centre of that Venn is a happy place. Outside of it is a whole load of conflicting advice and new age bullshit. My least favourite is visualisation “imagine clearing that jump and banish negative thoughts‘

Fuck? Really? Ask me to imagine the second after takeoff and all I’m getting are R-rated rushes of parabolic blood spurts, severed limbs and ground-sky-ground rolls ending in life changing injuries**. Rationally I know this is a statistically remote possibility, but it’s the only possibility I see whenever someone suggests mental exercises are the key to progression.

Okay, moving on. I know I can do this stuff. Assuming my subconscious has bullied its way into the driving seat and tossed all that mental angst out of the passenger window. I came late to steeps and jumping and I’m not great at either. Nor am I totally useless, except when it comes to proper steep and proper gaps. Then I just kind of freeze up and forget the very skills I need to deploy right now.

At which point we’ve been somewhat overtaken by events. The chute is right there, the lip of the jump is filling my vision. I wonder idly if I can grade all my riding pals on a curve. Back here we’re banging the needle on coward, a few yards up may register mildly anxious. Up front the perpetually unworried are on the stops marked bravery or lack of imagination.

Honestly there’s a time and a place for this kind of thing, but let me tell you this it is NOT when you’re about to dive into the void of the unknown. Really, this is not a great point to replace your agency with passenger. Get this wrong and you’ll have no one to blame. Except maybe those YouTube idiots.

Who are smugly clever after the event.  I’ve certainly failed to be clever beforehand.  The chute I fully commit to but blimey I’m scared. Which is entirely reasonable but also consequential. I’m so stiff I might as well be dead already. The line*** is so close to a muscular convex rock and then over a spur that just looks stupid until you consider the alternative.

One foot bounces off the pedals and I exit wide eyed and somewhat stirred. A couple or riding buddies thank me for showing them it’s not quite as easy as the previous two riders made it look. I garble something in reply waiting for my heart rate to drop below that of a amped up hummingbird.

Twenty minutes later, we’re backed up behind the big gap. Rex and I have made a pact to get it done tonight. We’ve both done it before but it would be a hell of a stretch to call it a regular occurrence. I crank hard behind Matt but it still feels too slow, so I’m still pedalling as we hit the lip.

Brilliant. All that practice the day before was for nothing. I’m so far over the front of the bike, physics punts the front tyre on a direct trajectory just below the exit ramp. Body parts inventory coming right up I muse. I’m surprisingly calm because the screaming part of my brain is off line. It’s basically gone stack overflow and taken an early reboot bath.

I feel two bumps. One from the front and one from the back. I then feel the bike is still under me which may have elicited a bit of a relieved noise. I wouldn’t call it a laugh exactly, more the return of respiration and a mighty sob. Six more inches and there would have been all sorts of trouble****.  Matched with equal quantities of trauma.

The rest of the ride was great. Feeling super confident and making decent progress. Still fucking up on a regular basis but that’s just Al standard operating procedure. But loving riding the new bike with a legal band of six.

Even so my thoughts turn back to the chute and the gap. The positive vibe is that if I can fuck them up so badly and not actually crash, the next time will be way easier. A few more after that and they will be normalised. Until the next thing.

The negative black dog is telling me I just got lucky, and that’s not going to happen again. Quit while I’m ahead. Or still got a head. You’re too bloody old and breakable to be taking these risks. Just enjoy what you can rather than lamenting what you’ve lost.

I’m not sure this is an easy resolution. All I know is I’m doomed to spend a lot more time thinking about it. It’ll probably go easier with a beer.

*I’ve read this a couple of times. I think it’s a good book but there’s a bit of me – maybe the chimp – wondering if it’s snake-oil.

**It’s a pretty vivid depiction. Think Hieronymus Bosch only with a little more focus on Hell.

***Line my arse. Path of potential survival is more how I see it.