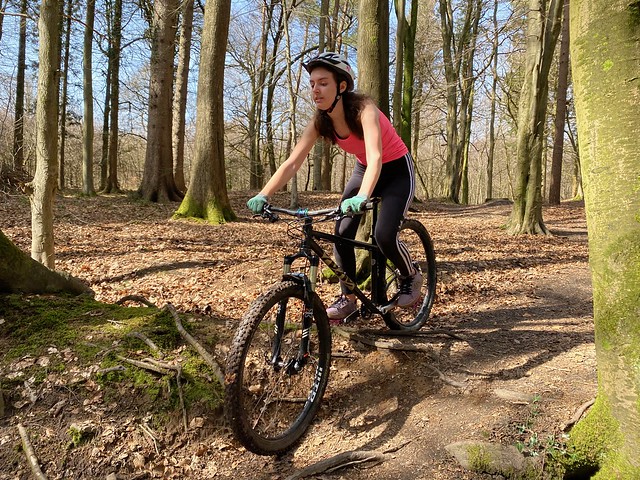 It’s been eight months since I rode with Jess. She’s likely missed it less than I have.  Whatever, these rides have the thinnest intersection against what I do week in week out. Bikes yes, everything else no.

That’s definitely a good thing. Riding with your friends – especially after the clusterfuck of previous twelve months – is a festival of chaos. Fast, slow, serious, stupid. Shallow as a tea spoon or as deep as blokes ever get. Genuine kinship and relentless banter. Extensive use of the word ‘fuck‘ as both an adjective and a a verb*

Love that. Tomorrow a legal six will forge British Summer Time, early spring sunshine and dry trails into something special. Outdoor pizza and beer will follow. We’ll probably label it epic, whether it is or not.

But today was different for all the right reasons. Firstly a diversion to sell a frame to a lovely chap who opened negotiations with ‘Hi Alex, I bought a frame off you 11 years ago, would you consider selling me another one?“**

He had and I was. So with that done, Jess and I unloaded bikes under sunny skies at Pedalabikeaway. She was worried about her fitness, I was more concerned with potential mud slides after a weekend of rain. Three days previously we’d dropped into PAB from the west side of the Forest, and it was way wetter than expected. On the upside first proper cup of mid ride coffee since Autumn last year.

Setting off with more hope than expectation, Jess’s lack of riding fitness soon became apparent. There were many stops for a breather and, occasionally, a walk. As a man with approximately zero patience this could have been a problem, But it wasn’t because the sun was shining, deadlines were happening to other people and one of my offspring was still happy to ride with her old man.

I say happy.  More suffering with fortitude and a long list of ailments, Wait till you get to my age I failed to say out loud, as we struggled upwards under blue carpeted skies. Jess could be a decent MTBer if she rode a bit more and trusted her skills. After half a year off she’s still pretty competent and it’s impossible not to be proud of that.

Sure it doesn’t define her like it does for me. But seeing her revel in being properly outside after three months of lockdown made my brittle old heart sing a bit. We took a break where Jess longitudinally measured herself on a fallen tree. After a rest, she women’d the camera while I sweatily gimped in and out of a handy bombhole. 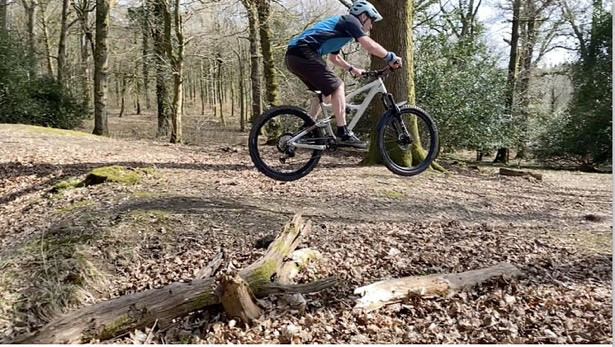 She’s ace at this. We had lots of fun me staring long-sightedly into the screen while she enthusiastically pointed out my many flaws. But in a lovely positive way which had me go at it 20+ times***. I retrieved the phone so she could describe a joyful parabolic on a handily placed rope swing 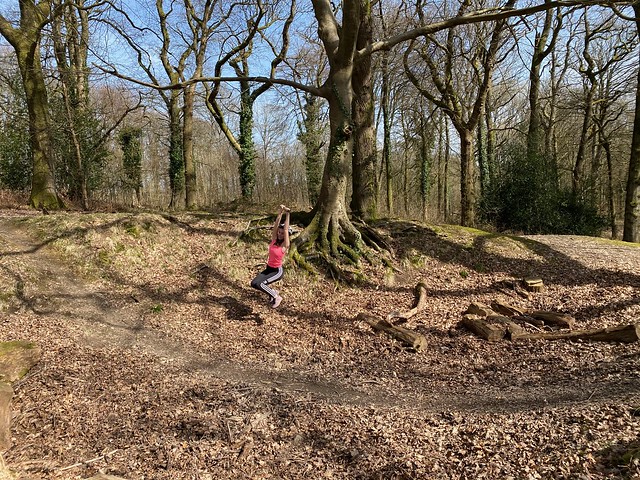 We sat on that log munching snacks and pontificating on little lives. Jess is a proper Psych undergrad while I’m a half-arsed read amateur, but blimey we share a proper despair at late stage capitalism. I never got the whole hand ringing thing that your kids become independent of you. That’s not the point, they are always bloody interesting and I’ll take that over changing a nappy.

Soon those hard earned banked gravity credits were joyfully spent on the final two descents. The last one having been recently de-brake-bumped. Jess was a little apprehensive but once she got going I knew how much she was enjoying it. Because I was having just as much fun at 50% of the speed I’d normally ride it.

In the same way there are no fast bikes, fast is absolutely in the eye of the rider eyeing up the next obstacle. Adrenaline isn’t triggered by a speed trap. This is still my world of going as fast as you dare, and then maybe just a little bit faster. I could see Jess re-introducing herself to that so no words are needed to codify why it’s were of the best feelings in the world.

She had many words tho, because – well – chip off the old block and all that. Steam of consciousness. Trying to capture the moment. Feeling the urge to share how that feels. Being a bit scared and doing it anyway. This really is why.

Back at PAB we secured cold snacks, cake and ice cream. There is no indoor service, outside tables or familiar normality. But there’s a chink of light these things are coming back. So we propped ourselves up against the bikes and toasted our success. Then went home to lie in the sun and ignore the pile of work stuff that seemed very important a few hours before.

Jess goes back to her Uni accommodation next week. We’ll miss her of course but she’ll be back for the summer. I hope then she wants to ride with me some more. Because much as riding with my mates is what I love to do, I love this just a little bit more.

Even better is if it’s under buckets of sunshine****

*Anyone who loftily declares swearing as a cipher for a limited vocabulary needs to spend more time with percussive poets firing semantic filth into innocent sentences.

***there’s a big gap jump I’m training muscles with memory for. We’ll be back to that as well.

****I wondered why I remembered this phrase. So I googled it. It’s the RAF slang for nuclear bombs hung in the bomb bays of the Buccaneers during the Cold War.