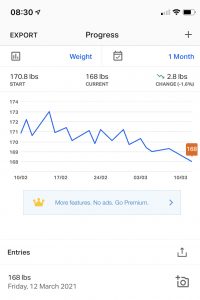 “It’s tragic really. You can eat and drink what you like well into your late 20s. Then you hit 30 and wake up as a fat bastard“. Thirty was so long ago for me,  it’s probably classified in the Jurassic period. However the axiom holds; that is youth being wasted on the young and fat bastardness is pretty much your future once its gone.

I’ve flirted with the porky*. Having the physique of a wonky pipe cleaner, weight doesn’t so much hang off me as throw shapes in the manner of Kane having a bad day on the Nostromo.  Although increasingly this manifests itself as a gut like trouser roll, and a pair of moobs wobbling in their own gravitational fields.

Before life got in the way I’d struggle to nudge past 11 stone in old money. Chest like a toast rack. To get close to that today I’d have to chop at least one leg off, or maybe remove the hard working liver with a spoon. That’s probably the firmest muscle in the entire withered frame.

2018 was particularly bad. Too many hotels, far too many hotel bars, not enough exercise and menu choices starting with ‘burgers‘ and ending with ‘extra chips‘. Returning from a family holiday in an all-you-can-eat-resort where I-ate-almost-everything, a behind the hands eyeballing of the scales showed them starting firmly with 13. Nothing else was firm. Like My Blobby but without the happy countenance.

I was determined to do something about it. I remember chugging down a beer while considering it. And a biscuit. Maybe two biscuits. Possibly the whole packet. My ruminations didn’t come to much other than ‘Al, this is mostly vanity, you’re not obese you’re just in denial. Exactly one person cares you’re a bit tubby and unpleasant to look at’“**

Another tired maxim is you can’t out-run or out-ride a bad diet. That was fine because I was working such stupid hours I wasn’t troubling the bike much- other than an odd weekend effort finishing with an avalanche of beer and crisps. And running was definitely out after an incident best remembered as an attempt to remove one of two feet the previous winter.

Enter the turbo.  A device designed to repeatedly demonstrate not only how unfit you are, but configured to broadcast that rubbishness to thousands of people on-line***. It’s hard to believe you actually have to pay for the humiliation of the whole experience. But under the cartoon graphics and in-your-face gamification lies a dirty secret. It’s way easier to lose weight going nowhere slowly in the shed than outside. Mostly because you don’t finish in the pub.

Even so, I still suffered weight fluctuations that cannot be explained by slow metabolism****, glands or big bones. They can be explained by zero will power, a love of beer and significant denial. This last year tho I’ve travelled exactly nowhere. Both inside the shed and outside in the real world. I rode 5500km of which a third were turning circles in the virtual world.

This made a difference. But not enough. So at the ripe old age of 53, I redefined my relationship with alcohol. That’s a pretty way to say I was drinking too much, too often and it needed to stop. Well honestly that wasn’t going to happen, but knocking it on the head Mon-Fri has become pretty much learned behaviour. I’d be lying if I said I didn’t miss a beer in the week, but not enough to sneak a visit to the fridge of plenty.

Piling on the misery, I’ve mostly given up crisps, biscuits and all sorts of other shit that makes life worthwhile. I’ve probably substituted cheese but come on throw me a bone here. It’s not like I’m accessorising that with a bottle of Merlot. Except on Fridays.

So what’s the result? I aimed to hit 12 stone/76kg by March 31. That was going to be a bit of an effort but it’s not a just 2021 thing. I’ve been smashing myself on the turbo since October and riding lots once the uber-grim dropped back to just mostly-grim.

My jeans now sag a bit. But the beer storage area – while reduced – has not completely disappeared. I can see some of my ribs but I’m fairly sure I have more than three. On the bike I definitely feel a bit lighter, and that’s backed up by the scales confirming my target weight last Friday.

So yeah I need to give myself every chance to do those justice. Being as light and fit as I can be arsed should be a given.  And it’ll save me buying any new trousers which appeals to my inner Yorkshireman.

So yeah Project 76 is done. What’s next? Tune in next week 🙂

*that didn’t scan quite as well as expected.

**Carol is far too polite to mention it. Although I think ‘Oi Fatty the bed is in danger of capsizing‘ would have been useful motivation.

***Zwift avatars are funny, No way I’d recognise anyone from the virtual world in the real one. Me included, I pretend to have a full head of hair.