I’m so down with the kids. I’ve seen lots of this sort of thing on Twinstagram and FaceTok.  So obviously now I’ve ‘done‘ one, it’s so crushingly uncool, you’ll only ever see it again on FriendsUnited or archly hashtagged ‘Yeah I think you’ll find that’s irony Grandad‘

Anyway for all that, this is not some ludicrous attempt to remain relevant* to those under the age of ‘Can we interest you in a Cruise and a complimentary dose of COVID-19?’. No, for all of those undergoing a ‘journey’ from one state to another**, here’s an analogue only with bike parts.

Parts being the key difference. Frame, fork and wheels were all that remained from the component heist pulled to build the Bardino. Sourcing the remainder would normally be nothing more than a rummage in the box of cast offs, abandoned projects, impulse purchases and a tiny percentage of my grip collection***

Not this time. The bike industry’s maxim to ‘never create a standard that will last longer than a wine gum‘ has obsolesced swathes of previously enjoyed parts which otherwise satisfied ever requirement other than being shiny and a bit old.  An excellent metaphor for my own journey through hair loss and accelerating ancientness.

There’s been talk of an economy drive in the ShedofDreams(tm) before. Not by me obviously, but emptying the virtual wallet on brand new parts doesn’t make much sense. Assuming you can get them. Which of course, currently you can’t and that’s okay as the ride to cost ratio remains low with Jess.

For it is she for whom the bike is built. Regular readers may remember the MK1 Solaris Max was pretty much perfect for her. However it was sold while she wasn’t looking and she never fully got on with its replacement. Let me take you through the teenage angst accompanying those rides.

Too long, bars too wide, too heavy, doesn’t go round corners, too hard to pedal up hill. The obvious solution would be an e-bike but we’re absolutely not going there. I never claimed to be the best parent, but really short of harvesting them for their own organs, I cannot think of anything worse to inflict on an offspring.

Having exhausted my own spares kit, I skip-ratted most of my friends.  Lovely old but pretty XTR cranks from Cez, a narrow bar and some leaky brakes from Ads and a dropper from Matt’s ‘shelf of abandoned seatposts’ left me needing to pay actual money for a stem and a non pissing caliper.

It took Matt a couple of sessions to build it up. Firstly because I’d failed to deliver all the actual parts to his garage, and secondly as Herefordshire had a brief tier-1 window into which we jumped. And rolled out of some time later. For the sake of mitigating the possibility of Jess’s patent Paddington Hard Stare, I threw on a half worn front tyre, a 46 tooth cassette and comfier saddle. 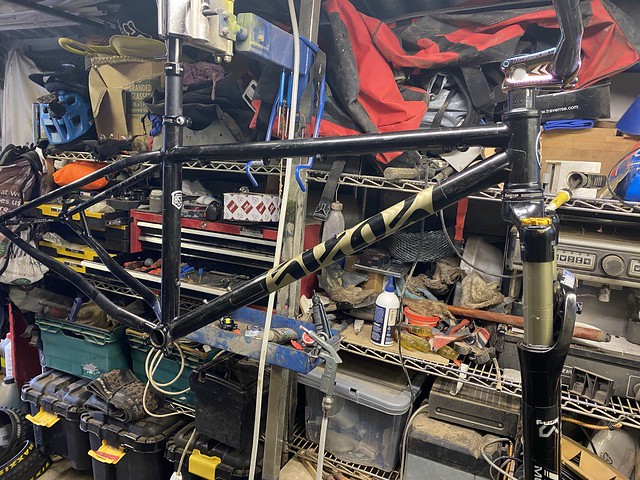 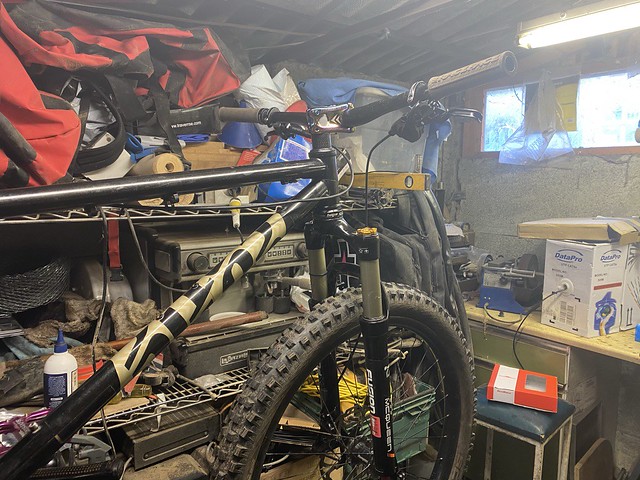 Matt dealt with keeping the brake fluid on the inside of the hoses, unslackening the fork**** to bring the front wheel back from ‘it’s out there somewhere, just not quite sure where‘, rejuvenating a very bent mech with a very big hammer, and general fettling well beyond my ken. 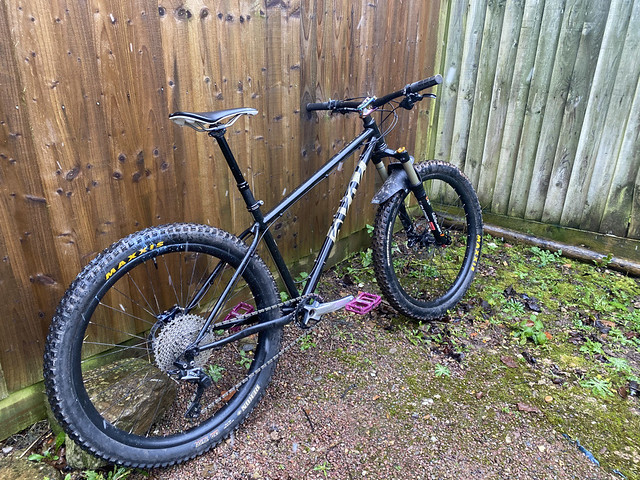 And there she is. Not Jess, the bike. Total spent £40. So about 1% of what I normally spend on a new bike. Which includes the Stem-of-all-the-colours she picked from a selection of £13 ones off eBay.

So how does it ride? Well a quick blast down the road in the snow was interesting. Mainly because the bar width screams ‘zip tie on a race plate‘. Other than that it’s definitely lighter, more spritely and well you know bike like. It was a great frame to start with so hard to screw it up really.

The more pertinent question is “Does Jess like it?“. She likes the look of it. Ride impressions will have to wait until the mercury rises above zero and / or we’re actually allowed anywhere fun to test it.

The important thing is it’s not longer languishing in the rafters and – due to the generosity of my friends – is ready to go for when Jess is. Obviously when she’s back at Uni, I might have to test it myself.

*which suggests I ever was.

**New Years Resolutions:  What I think of as the ‘Pasty to Salad back to Pasty‘ journey. Completed in around 10 days.

***I have around 40 grips. Some even in matching pairs. I cannot reconcile how this has happened. I can only assume they breed by eating individual socks. There has to be a correlation.

****Keen readers may note it looks very short. Spotters badge. It should be 120mm, it’s currently 100mm. I refer readers to the previous paragraph re: pub.