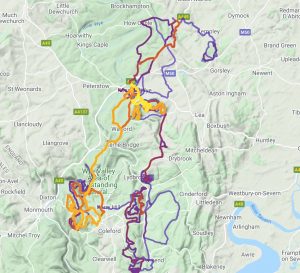 2020 then. Hard to know where to start. The year may be coming to an end, but we’ll be reaping its’ shit-storm a little while longer yet. A global pandemic brought local by incompetence, ideology and insanity repackaged as winning. Brexit Britain ruling all those statistical waves, where deaths per million stamp exits on the petty nationalism passport.

Still on the upside, I rode quite a lot. That image is my ‘Covid-Box’. More a 5x10km rectangle fencing 98% of every time I tried to leave the madness behind. Early on alone and introspective, later on with friends I’d desperately missed, occasionally normalised in the pub and latterly under darkening skies.

Zooming out fills in the 2%. Three trips to Wales, all the more unusual for blue skies and sun baked trails. The last of which – late September – felt like the start of something normal. Eight of us descended on Coed-Y-Brenin to climb the steep sides of those North Welsh hills.

To then plummet down the other side, reacquainting ourselves with what we latterly took for granted. Post ride sitting in a pub garden toasting the end of the beginning. Yeah, that’s aged well. Still a great memory and there’s been a few more of those.

Zoom out a little more and a few tracks fan out from Malaga where we had the most amazing time way back in Feb. Feels like a different time.  A different life where social distancing was swaying away from an unwashed pal, or masking your drunkenness by hanging on to a handy lampost.

That’s it tho. Andorra for Alex’s 40th went early, whereas a second trip to Spain suffered a realism deficit right up to the point when common sense overcame desperation to ride dusty trails we knew so well. I totally accept this is a first world problem, but it’s still my first world problem and while everything else can be postponed getting older cannot.

I’ve no idea how many of these trips are left.  Again let’s focus on the good stuff; I’m mostly uninjured, 1/2 a stone, in old money, lighter than the last time we passed round the sun, feeling good on and off the bike, and not yet bored of slithering around the local trails in a percussive manner.

That summary hides a dirty secret. Of the rather impressive 6,000km I’ve ridden this year, 30% were racked up going nowhere slowly in the shed.  First time I’ve cracked 100,000 metres of climbing but again 25% of that elevation was nothing more than a flywheel and a desperate urge to chase people I’ve never met.

The other 70% is encapsulated by the Covid-Box. Living smack bang between two areas of Areas of Outstanding National Beauty does have its advantages. Forests and views being a couple of them.  Bike forums are awash with those having neither. Apparently getting bored of your local trails is a thing.

Not for us. The trail network is criss crossed with classics, old favourites and new digs carved out by furloughed trail pixies. Digging into my ride data unearthed a couple of nuggets; firstly I’d climbed the bastard-oh-god-are-we-there yet track into the local woods a one less than make-your-own-joke here 68 times.

Over half of those were to access the two forks of our trails; Penyard being more trail dense, shorter and a bit less technical. Chase benefiting from a little more elevation, lumpier geography and longer runs. On long summer days we’d fork both left and right, before forking off to Matt’s Speakeasy to neck cold drinks toasting perfect sunsets.

The rest of the time we’d go long. Penyard being a gateway to the Yat where trails sprout from every forest road. Climb enough to be rewarded by views across about five counties and one other country.  Descend on perfectly sculptured tracks until arms pointed to the pub when the legs were done. This was pandemic-lite – we knew what was happening but it was mostly happening to someone else*

Sometimes that was people we knew. Seb (editor of www.cranked.cc) and I swapped rides. After a fantastic Mendip loop, I hosted him on our local trails in perfect conditions. We had such a blast finishing in the pub, accessed via the local Church steps, arrowing you into the welcoming garden of the Kings Head.

These – and so many more – are the memories I’m taking from this shitty year. Because I can’t control any of the scary externalities. I honestly don’t know what normal is going to feel like, nor when we might celebrate that moment.

I know this tho. 2021 just has to be a better year. And we all have a part to play in that. We’ve learned to endure so many things, but it is the random acts of kindness which stand out. Almost like spies behind enemy lines. There’s more to bring us together than to divide us.

None of us can fix the clusterfuck that is 2020. But all of us have shown we don’t need to. We can be there for each other. Nothing is more important than that. Even riding bikes.  Although, let’s be clear, that is still extremely important

Happy new year all. Fingers crossed it’s going to be at least okay.

*Herefordshire having the lowest rates of the virus right up until we went into Tier-1 the week before Xmas. At which point those five counties and one country pretty much fucked it for everyone.