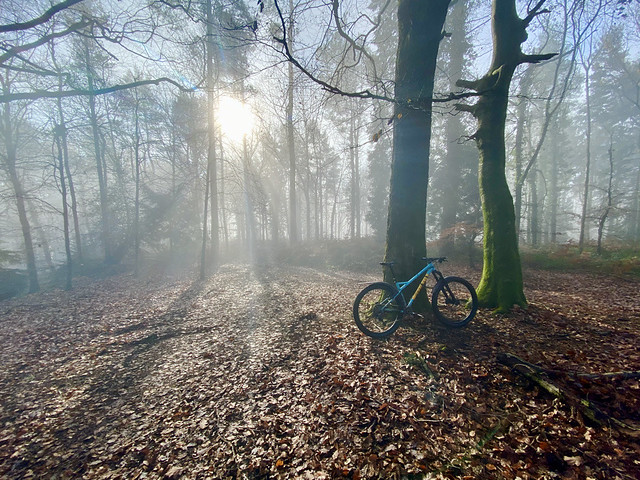 It’s been a while. Most of which has been filled with cold, wet and a semi-busted shoulder. Current events were depressing enough without piling on the misery pre-winter inevitably stomps it’s depressing size 10s all over.

Taking the last first, that’s a frustrating injury taking far too long to heal. Some of that is age related decrepitude, a bit more smashing it down and then onto bumpy trails. That was such a stupid crash right at the end of a fantastic autumn skive ride.

I watched Adam make a proper hash of a steep rooty corner. Him being a far better rider than me in no way highlighted the possibility that personal calamity was in the offing. I confidently struck out on a higher line festooned with slick-blacked tree nurturers.

Grip deferred to gravity as was obvious to anyone not called Alex, and that person suffered a precision strike where four weeks of physio had been painfully enacted. Did it hurt? Shit, yes. Did I whine? Of course, what did you expect? Did Adam laugh? Yes*, but that’s how schadenfreude works.

Said physio gave me a bit of a telling off when I returned to the clinic a few days later. To whit you’re playing a young man’s sport and, well how can I put this, you’re not rocking that particular demographic. Stop riding or stop crashing for a bit. There’s only so much medical science can mitigate serial stupidity.

Appropriate chastised, I retired to the shed. There is no place to hide with a turbo trainer. No really, it is <–> far from the desk I spend my virtual days. Mocking the corner of my eye with its it’s been a day, get your spawny arse back on here, or are you too weak?‘ 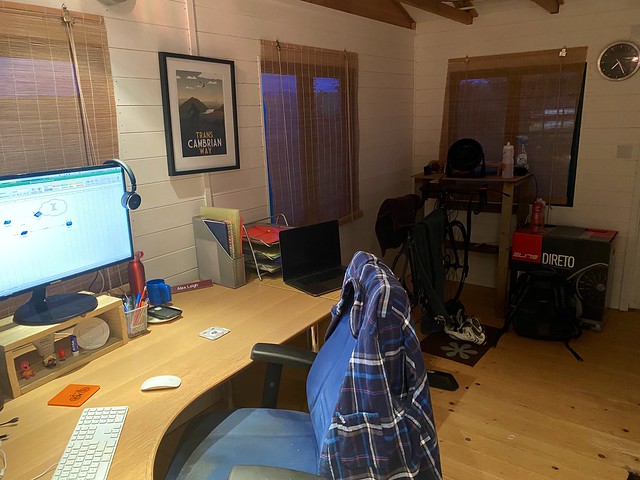 15 sessions later, it would appear I am. Worse than that – much worse – is I’ve started to almost enjoy it. Careful use of the word ‘almost‘ there but even so it’s not so much the thin end of the wedge, more the end of the beginning. Let’s go back and review the wet and cold outside this cozy world of cartoon graphics and weird internet-spliced friendships.

Even a cursory reader of this blog is cognisant of my pointless hatred of winter. Specifically slogging through the four month festival of slurry while failing to measurably improve my low-baselined mud riding skills. Every year I promise myself will be the year endless commitment and careful tyre choice shall  bring forth a seasonal epiphany.

Nope. Watch some youtube vids. Nope. Fit some expensive tyres. Nope. Give myself a serious talking too. Nope. Nope. Nope. Plan B then – if you are struggling to succeed, redefine exactly what you mean by success. By lowering the bar under which even a professional limbo dancer would consider unplayable.

No longer shall I pretend I might be confident in the slop. At no point will fast enter my vocabulary unless speaking of others. The whiff of disappointment shall be met by the stench of tiny expectations. Just getting out and staying upright will be considered more than enough.

And it really is. This mad world we find ourselves in is brought into focus by back to back Zoom calls, but graduated by a fuzzy boundary between work and home. What with both being co-existent, and the former stealing hours from the latter.

When the screen feels like most of your life, I find a hearty ‘fuck this, I’m outta here‘ works well to nudge the dial of wellbeing. I abandoned a Friday in the virtual world for a skive ride in the real one. The kind of decision we all need to be making more often.

It matters not. I was rubbish. That doesn’t matter either. I got lost. That mattered a little as we dropped into stupidly steep trails best thought of as a mud slidey accident ready environment. I could hear the physio cursing. Although she’d have had to go somewhat to drown out my own ‘fuuuuuucccck, shiiiiiiit, boooollllllooooox‘ as I fell down the hill occasionally accompanied by bicycle.

Adam – yes him again – was loving it. ‘Hey Al, thanks for showing me these trails, they are brilliant‘. And they are, or they will be under April loam or July hardpack. I was annoyed at how well Ads rode those trails, fully committed and troubled not at all by self-doubt. I was angry with myself for not getting within 50% of that.

Then after besting the greasy horror of the 15 minute climb to the top, the fog briefly cleared, the low sun burst through illuminating the dank. Shards of late autumn light pierced the leafless trees. The gloom lifted as did my spirits.

This is what being outside is all about. Those moments when the natural world plasters a smile on your face. When the unexpected makes you pause. Think a bit. Maybe all this will pass. Maybe it won’t.

But you’re unlikely to be watching from the right place if you’re staring at the wall of your shed. Riding bikes when conditions are shit isn’t really about riding bikes. Not for me anyway. It’s about sharing those little wins with those who know how special they are. It’s about giving the finger to the idea we are largely powerless.

It’s about making a choice. Is the fog really lifting? Maybe. Maybe not. But you’ll find me outside wondering if any of that really matters.

*in his place, I’d have asked him to do it again for the camera. It was that lame.

2 thoughts on “The fog is lifting. Maybe.”