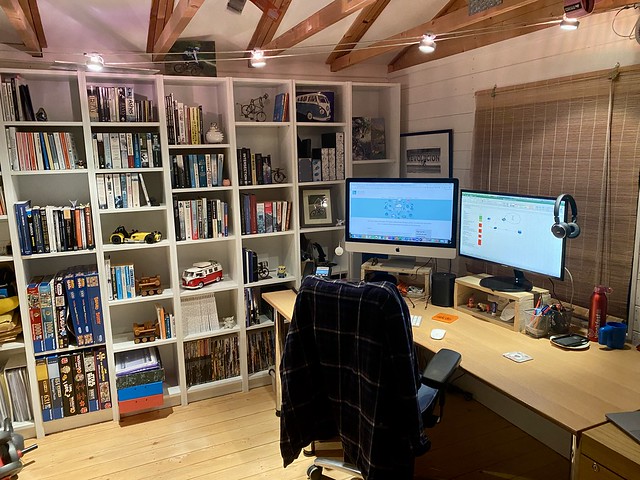 Back in 2008 we had a new house, lots of ideas but not much money. Therefore the priority was some form of heating to combat the inrushing winter. That form ended up hoovering up all our funds, and lots more beside as, in the process, we created an authentic WW1 trench experience*

Having swerved difficult conversations with social services**, thoughts moved to freeing the house of bikes, bike stuff and the primary bike rider. My thoughts anyway which envisaged a cycling cathedral soaring high into the Herefordshire skyline.

After all we already had a 50×25 foot slab laid for an unbuilt stable. We didn’t however have the budget to fill it, so instead commissioned a modest*** structure satisfying both ‘bike storage‘ and ‘home office‘ requirements. Some dithering, a stud wall and a purchasing strategy best summarised as ‘lowest cost bidder‘ brought forth the ShedofDreams(tm). 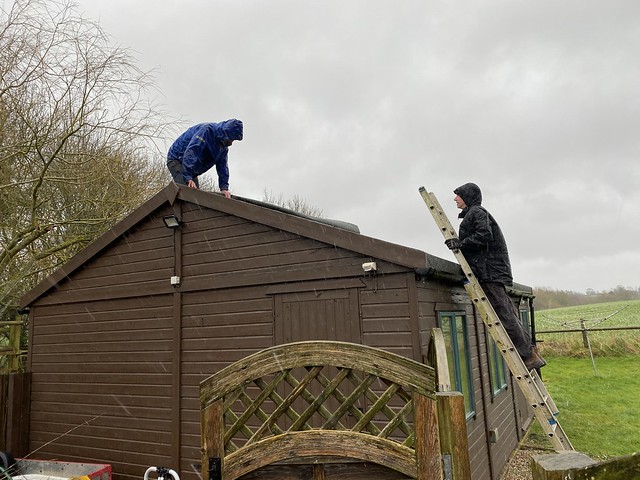 The bike side has seen extensive use. It’s looking a little tired but is still home to many of my favourite tools, all correctly labelled and mostly unused.  Actual bikes tho they’ve all been campaigned extensively. If – in most cases – somewhat briefly. 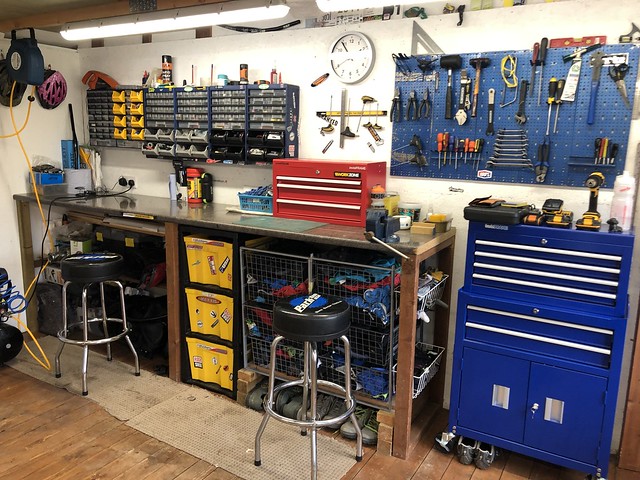 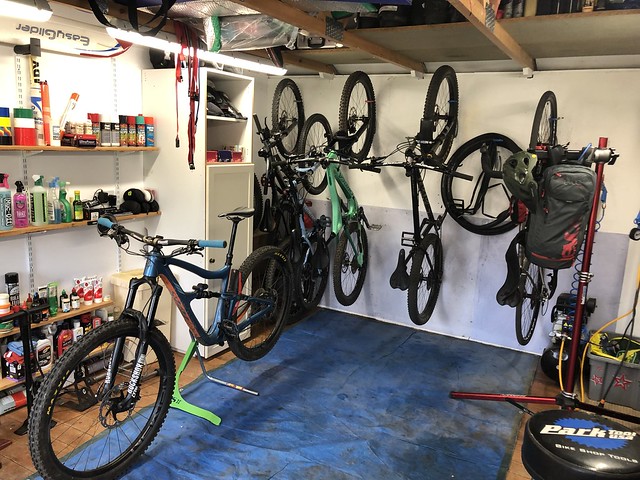 The office side has seen rather more sporadic occupancy.  When the kids were young, my attempts to project a thin veneer of professionalism were often punctured by noisy sibling rivalry and occasional violence. So a ‘safe space‘ had many things going for it- a good part of that was its lack of said rumbustious offspring – but a decent internet connection wasn’t one of them.

Back in the day not a massive issue. We weren’t 100% dependant on the Internet and even if we were, our broadband bandwidth was somewhere between dial up and despair.  The phone worked tho, and occasionally I’d be delighted to find an email dated within the last month pop into my inbox.

Other issues need to be surfaced though. We’d gone a bit insulation mad when building the shed. This kept it lovely and warm in winter – even with the wind whistling between most joints, I refer you back to lowest cost bidder – but come summer it was an unpleasant fusion of a grotty Sauna and the Hot Boxes best known from the ‘Bridge of the River Kwai’.

I gradually migrated back into the house. The office became mainly an auxiliary dumping ground for shit we’d never need but you know just in case. It also became home to a rodent population gorging themselves on said crap. Not an attractive proposition in terms of moving back in.

Then COVID. Before which I was on the road so much of the time, my ‘home‘ office was generally a hotel or a train. Now 6 months after snaffling Carol’s craft room, my marching orders were received, notarised and absolutely not to be considered a request. Which is entirely fair since I’d annexed a decent chunk of the house.

We cleaned out the mouse-poo, had the painting finished we’d abandoned some ten years before, assembled a ‘zoom wall‘ of cheap Ikea bookcases and attempted to fit everything around the turbo by accidently burning it. Sadly it appears both bloody annoying and inflammable. 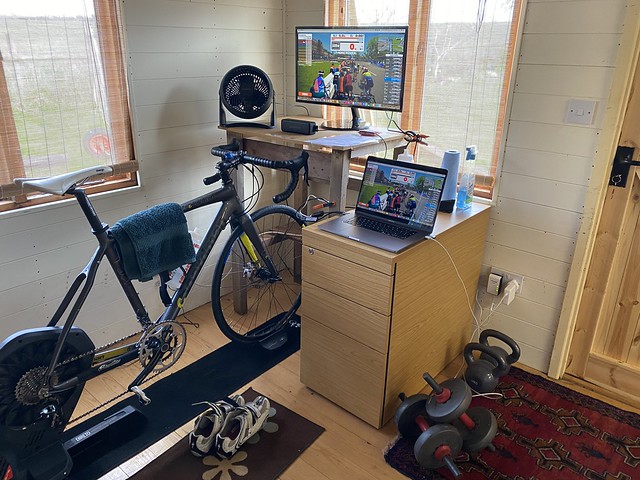 Internet tho. My weeks now are filled with a minimum of 50% ‘you’re on mute, I can’t see your video, can you see what I’m sharing?’ While the cosmetic upgrade was impressive, the digital footprint was still mired in the sand. Turtles racing through treacle best describes the pedestrian opening of a web page.

Not to worry, we’d foreseen this problem during the excavation phase, so burying a hosepipe route between shed and house. Sadly no-one could quite remember where it might be located. As ever my friends rallied round my incompetence with practical solutions; a box of externally rated Ethernet cable from Matt, A crimp tool and a bloody big drill from Rex*** and some strong managerial support from yours truly.

In my defence I designed the not-very-complex non physical network stuff. On the grounds I’ve built some proper fuck-off massive global networks in a previous career, so I’ve got this. Nobody cared. Quite right too. 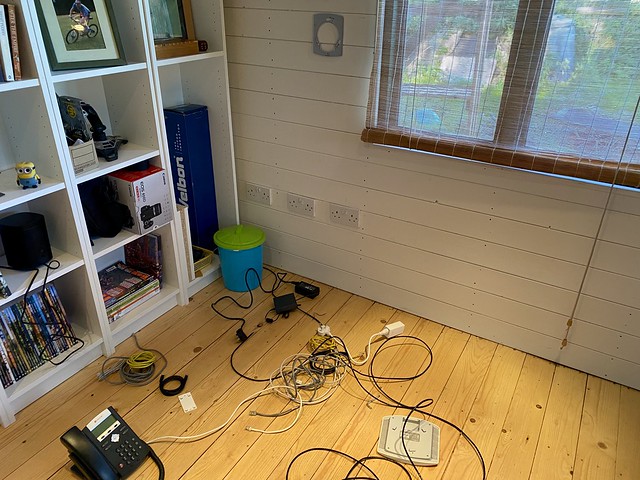 All a bit anti-climatic really. Cable laid (insert your own joke here), outside wall drilled with a bit barely fitting in a LWB transit, cables crimped, slight fuck-ups corrected, connections snapped in and we had all the good lights. ‘Communications have been established from the MotherLode‘ I bellowed triumphantly from the shed. Again, nobody cared.

Makes me happy tho. 50 meg from the shed. 50 bloody meg. On the downside Zwift will now never drop out so that’s that excuse gone for good. Upsides tho? Many, out of Carol’s hair for a start. A door to close so I know when to stop working, a chance to flex my Sonos speaker without upsetting – well – everyone really.

There’s more. I have a double zoom wall, one containing the BEST PICTURE EVER commissioned for my 50th, the other stuffed with my favourite books and a few lego offcuts. I might have cracked that professionalism thing, Until I start talking obviously.

And I haven’t even got to the best part. Smart-Plugs. Why was I not told about these digital sorcerers? We’ve run out of space this time, but a thrilling post is in the works. I know, I know you can hardly wait.

Until then, I’m back in the room. For a laugh I might move the laptop to next door so the customers can see what their custom mostly pays for 🙂

*300m of ground source pipes dug to a depth of 1.5m. I’m sure we had more pets before we started.

**both of your young children have called us asking for heaters, blankets and some proper parents.

***it’s still bloody enormous compared to normalised shed dimensions. Yet I look out on 8 feet of slab and feel a bit sad 😉

****who last year risked life and least one limb wrestling the 4G antenna on our chimney. Goodbye shit ADSL, hello 50meg off the the local transmitter.