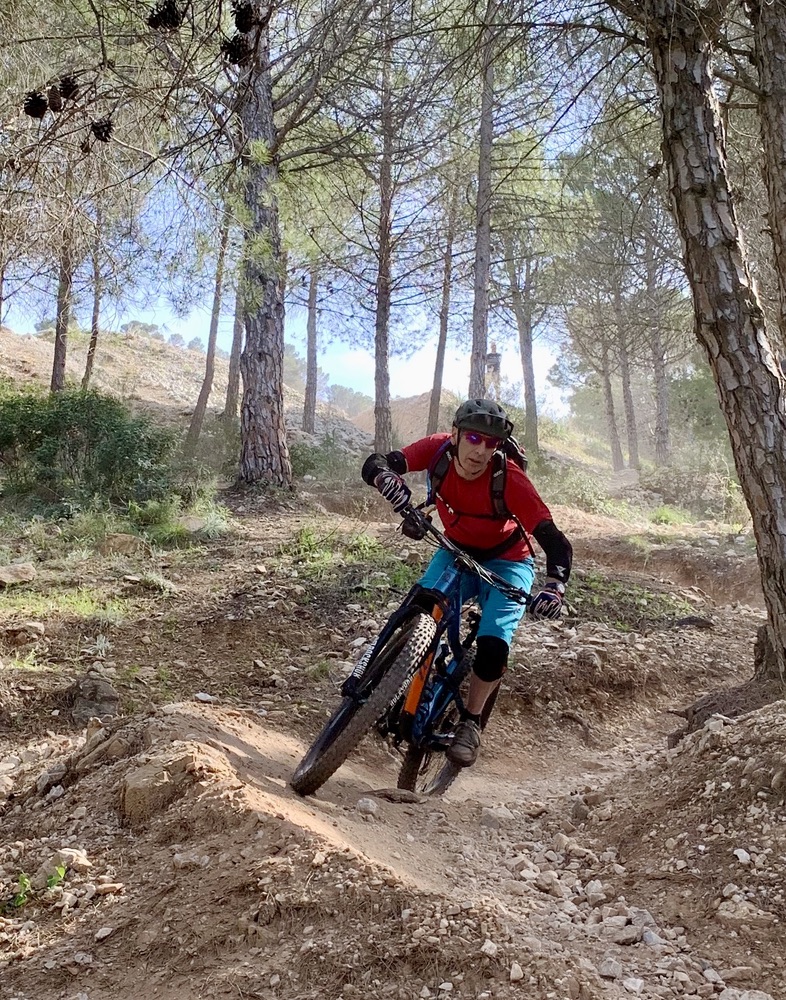 High outside elbow. Hips canted to the inside. Outside foot hard down.  Eyes scanning the exit. Shoulders forward, hands relaxed.  This is not – as it might appear – a late appendix to the Karma Sutra nor some kind of personal Feng Shui. No this is what passes as ‘best practice’ for navigating a bicycle round a corner.

“Oh really, fuck off” I hear you sigh. I’m mostly with you because that very best practice is somewhat subsumed by the axiom that any task is ‘as easy as riding a bike‘.  That’s problematic though because ‘riding a bike’ launches itself across a physical spectrum in the same way that tentatively strumming an ‘E‘ chord celebrates you as a great guitarist*

It gets worse before it gets better. Similar headology suggests brain surgeon hand eye co-ordination is required if you’re keen to jump or drop off things. At least if you want to complete them without needing the skills of that head doctor. Having hoovered up every YouTube channel we’re still found lacking with serious talk of ‘pumping for speed’ and ‘pushing for grip’.

I feel we may have jumped the shark here. Mountain Biking must be the most over-coached sport on the Internet. Whatever happened to learning by crashing? It’s served most of us well while providing excellent vocational experience for trauma specialists across the country.

Easy for me to take the piss. But I’ve watched all those videos and attempted to place myself in the frame. With – let’s be charitable here – mixed results. Mostly because I’m a bear of little brain and there is far too fucking much going on to remember which limb is which never mind how it should be articulated.

Instead I fall back to bad habits.  Mostly falling off because I’m too far off the back and I won’t lean the bike far enough over. I take refuse in micro braking and then desperate pedalling to cover for my inadequacies. It’d be over-deprecating to say I’m really rubbish and slow but that’s not the point.

I know I can be better. Even a month short of my 53rd birthday.  And just occasionally I am. It’s mostly a one ride epiphany snatched away when it all goes to shit the next time around. But if I’ve learned anything it’s to live in the moment you have rather than worry about those you missed.

Wednesday night we’re riding local trails. Summer rain has raised hero dirt from the sand. My bike is working perfectly and I’ve got my ‘get it done‘ head on. This time last year I tucked my terror of crashing into a quiet place and launched myself over the biggest gap jump on our local hill.

Confidence since then has been mixed. I pretend to laugh at the priority of progression. That I cannot do the things I used to do. That getting out is as good as getting better. That decline is fine and I can look back on past achievements over a beer and a fat belly. Fuck that. The fire still burns a little.  We’re all going to die of something. Might as well enjoy the experience.

So I’m chasing an aged-matched Matt and a far younger Adam on a favourite trail. The whole best practice thing passes me by as the speed increases. Because now I’m in essentially survival mode. I’ve handed the whole thing off to muscle memory and instinct. Which to be honest hasn’t ended well in the past.

Here’s why.  Anyone who rides mountain bikes at any pace has a safe speed. A velocity well in their comfort zone. Margins for error and coping strategies. It moves a bit depending on your confidence level but it’s a window through which you rarely crash. Rarely take real risks. Rarely feel properly scared.

This makes sense. All of us have to go to work in the morning. However fast we are, there will always be those who are faster. However many metres per second we push it, we’re a million miles from our limits. This is a hobby not a race. The older you get the less you can afford to lose a summer. Or maybe every summer from now on.

And yet. And fucking yet. Mountain biking is a pretty stupid way to spend your time so you might as well embrace the madness. Both wheels sliding, eyes squeezed almost closed as you rush through narrowing trees. Suspension hammering as you leave the brakes alone. Pushing past that safe zone, heart racing and arse twitching.

I’m still in touch which is great for my ego. I’m still on the bike which is an even bigger surprise. I’ve already ridden the two big gaps so it’s no surprise when I finally clear a big table that’s mocked me the previous 100 times. But I am absolutely not living in the moment. Everything is happening at great speed, and I’m mostly a passenger because after 30 years of riding my body knows what this gig is.

Brain tho, it’s basically shitting itself. End of the trail it reasserts control, I try and play it cool with a breathy ‘Brisk that run fellas‘ . But they can see me for the charlatan I am.

That’s fair. I’ll probably be rubbish again tomorrow.  Right now I just need a beer and some life affirmation.  And maybe to trust myself a little more than those offering snake oil on this tube 😉

*which if you were a member of Status Quo wasn’t far from the truth.