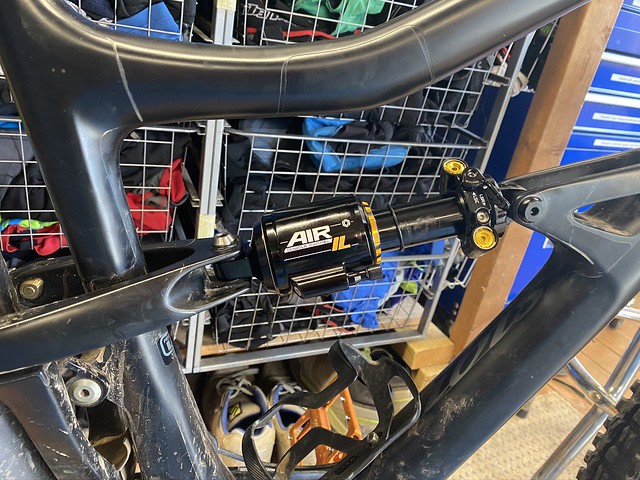 .. a clickbait title mirroring recycled ad-laden content desperately seeking bored eyeballs. This is something else. A weary pun nodding towards broken suspension and false hope.

Sure I’ve told fibs. Some mighty whoppers. But that’s hardly shocking for any reader who has stuck with me for even a few posts. This was also something else. Somewhere between self deprecation and lying to myself.  Hard to believe I’d get fooled that easily.

I was blinded by pretending the problem was me. Although that’s a hypothesis with an almost 100% success rate.  Failing that it wasn’t clear to me if the issues were front or rear related. On reflection I should have started with ‘both‘ and worked back from there.

Handing the whole thing off to the professionals I dropped the unresponsive fork off to the fab Sprung Suspension. in the hope they could somehow revive it.

Two days later, I took a call from the head honcho Jake  who – knowing me well – broke down complex suspension issues into good news and bad news. Bad first, ‘Al that fork is totally fucked‘ followed by ‘Surprisingly this time it isn’t your fault and we can send the remains off for warranty‘.

Or replacement as I discovered a couple of days later at the workshop. As it was explained to me the bushings (the static tubes the stanchions slide up and down) were oversize meaning the whole sliding thing was more of a grinding thing. To the point where a designed oil lubricated interference fit was more of a milling process.

Six months of that and the forks are scrap. Some of you keener types may feel the need to ask why I didn’t notice. Let’s say I misdiagnosed the issue as a setup problem, and swiftly move on to more interesting things. To whit the other end and that ^^ brand new rear shock replacing the lump of unyielding wood disguised as the factory fitted ‘custom tuned‘ option.

I really do like Ibis bikes. For all sorts of reasons. But even the most rabid fan could not countenance fitting a clearly rubbish shock on a three grand frame. And yet here we are. The custom tuning of said shock appears to render it harsh on small bumps and useless at damping bigger ones.

I’m so very aware my riding ability is rarely held back by mildly sub-optimal components.  To be sure I wasn’t coming over all Pea/Mattress/Princess I asked Adam, who has a similar bike collection vibe as me while being far more skilled, for a second opinion.

He concluded – after less than a minute of riding – that the shock had all the compliance of an iron railing. We’ve both ridden lots of Ibis bikes and this didn’t feel like any of them. Somewhat ironic then that I’d passed off my piss-poor performance on the squidgy object suspended on top, rather than the springs below.

Leaving aside my diagnostic ability, or more the lack of it, let’s instead consider the same bike only this time riding on shiny new components. This new shock has all manner of widgets and knobs* for the knowledgable rider to tweak. Jake dialled some baseline stuff in leaving me to consider the best tuning option would be not to touch anything at all.

Up front Jake generously lent me one of his very expensive forks. Equally festooned with options for me to fuck it right up, I chose to leave that one alone as well.** 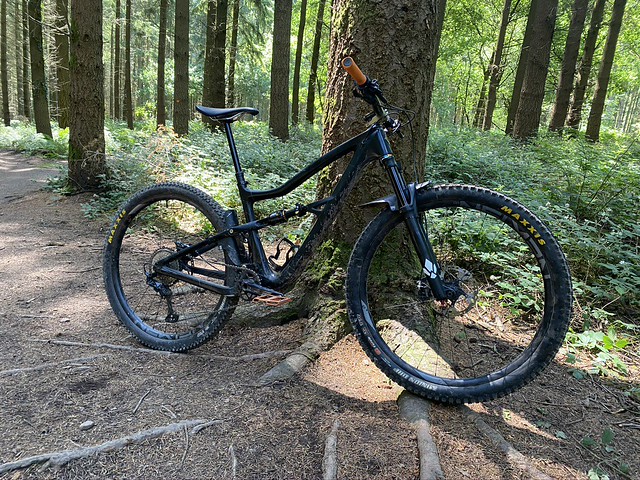 So what’s it like now? Good news and bad news again. It feels like the bike that’s been struggling to get out since I bought it. It’s given me way more confidence in the front,  while the back end has curbed its rodeo enthusiasm seemingly bent to launch me into a handy tree.

Bad news, it hasn’t stopped me crashing. I stumped myself between low lying arbetirum and a stabby pedal. The squashy foot and ankle came out worst, one bleeding, the other aching. I wish I could blame that on the new suspension but we all know that’s not the case here.

Still now excited by riding a bike I now quite liked, I invested yet more time trying to set it up properly. This time tho by attaching Matt’s ShockWiz electo-trickery to the shock. It’s a slew of accelerometers and gyroscopes secured in a hard case amped up by all sorts of algorithmic cleverness.

It told me many things*** some of which I understood. But after riding five consecutive days in the land of diminishing returns, I was keen to return to a fully analogue world. Especially if there was a beer in it.

There was, over which I attempted to convinced my riding buddies that this apparently chaotic quest for the truth was nothing more than the kind of noble quest I am well known for.  Shockingly they didn’t see it that way. It’s almost as if past experiences were held against me.

Back to the present. What have we learned? Oh I don’t know, probably nothing of importance. Let’s ask a better question. Is it a keeper? Now I’ve spent proper money on it, it’d bloody well better be.

*not counting the one riding on top of it.

**considering I’d invested never-to-be-regained time fettling both ends in pursuit of some kind of suspension harmony and achieved bugger all, this seemed the logical approach.

***most of which I couldn’t read with these old eyes. I had to ask the help of a younger rider. It was that or just guess. And that hadn’t gone well in the past.