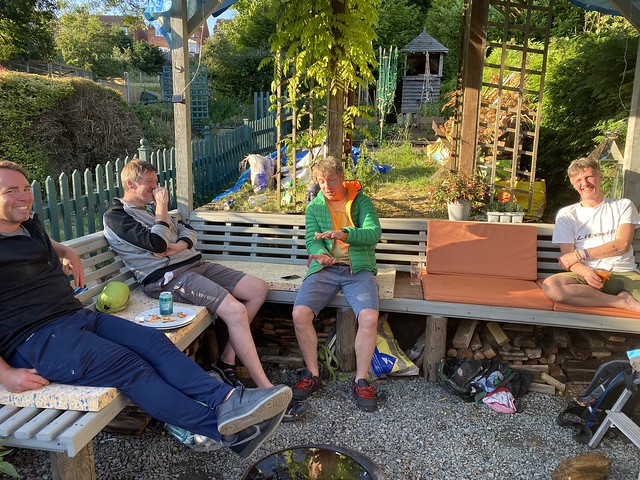 “No plan survives first contact with the enemy” – so goes the military protocol often re-imagined for the corporate world. It’s common sense but as Voltaire was keen to point out common sense is rarely common and often diffused by  bullshit*

Today a plan DID survive first contact with the weather. But only though peer pressure and the promise of beer and pizza. That hides a deeper truth best summarised as ‘there is nothing better than getting the band back together’

Post lockdown we’ve upped the numbers game. Two, three then four guilt-free riders seeking the touchstones of the ‘old normal’. We remain socially distanced but socially comfortable. The banter splits the two metre divide, the climbs tell stories of the solo training, the descents remind us why that doesn’t matter. Nothing has changed, but everything has changed.

Roll forward to today. No one really knows what day it is anymore but we’ve plotted a straight line between a skive ride and beers in Matt’s ‘SpeakEasy’ built during the endless blue sky days when lockdown angst morphed into activity.  Six are due but few are counted an hour after 36 rain filled hours suggested winter had mostly returned.

Full disclosure I must take some of the blame for this precipitation event. After two crashes on sand where dirt used to be, I out-louded the heretic notion that a bit of rain might be welcome. I probably should have been a little more precise with my definition of ‘a bit’

It’s not quite the ark-building 40 days and 40 nights but we’ve had deluge and drizzle in equal amounts. Hence me wintering up in waterproofs from head to toe. 11km of road separates me from the trails and every metre is pot-holed miserable damp.  The quiet roads are gone and I’m being moisted from top, bottom and side as cars slide past with that minimum of caution I’d almost had time to forget.

The rain stops as the dirt starts so I pack most of the rain kit and join the fellas. Surprisingly the other five are waiting for me. Maybe not such a surprise as this is what we do. Even when that common sense suggests we should be doing something else.

It’s all a bit slithery and I’m back on the hardtail after three months of faking it with multiple double sprung trail dampeners. A double espresso wake up call ends with the first two corners avoided via a fern-slapped straight on option.

Get a bloody grip, The damp trail is surprisingly giving it plenty. Lean over the front end, punt the eyeballs away from the glassy roots and revel in a 2.8 tyre that laughs in the face of mud and slop. I’m not laughing because there is bog all cerebral capacity left over from concentrating hard and revelling in the visceral joy of riding a proper sorted hardtail.

I’ve missed that. But not as much as I’ve missed my mates. There is much piss taking. Fingers are as pointed as the barbs. Everyone laughs because this is what we do when pedalling stops. Some like to ride alone but for me that’s a denuded experience. I’m fine being isolated in my own head, but once we head outside then the Brownian motion of like minded souls is the very thing which fills that soul.

No one crashes. Close calls and cat calls. Taking risks and sharing how that feels.  Bottling it and making excuses. Bottle this, it is the stuff of life. It’s what we do that others do not. Fuck me I’ve really missed it.

We retire to the ‘Speakeasy’ where beers are opened and tales are told.  Matt has built a Pizza oven which requires all sorts of activities long distanced from any kind of health and safety to fire it up. More beers soften the hard fact we should be in the pub.

The location is irrelevant. We’re getting a bit pissed while attempting to send pizzas into Hell’s kitchen firing out smoke and flames in a happy version of Hades. Now I remember what I’ve forgotten, the easy company of those who’ve you shared so many experiences.

‘You remember that time in that hovel a hundred miles than civilisation?‘ and ‘that snow-bound winter ride when we had to dig ourselves out of a four foot snowdrift?’. Of course we do, some of it might even be true. Or at least true to the power of beer exaggeration.

None of that matters. What matters is this: days like this do something to still the madness. They distill the uncertainty into nothing more than having great mates who share a common cause. Who are probably full of the same insecurities eating away at me, but not today. Not in this moment. Not when you realise you have taken friendship for granted.

Let’s not do that. I pulled a final beer, grabbed my phone and captured a 2-d image of a 3-d event. That one up there. These are my favourite bunch of idiots and I’m very grateful to have them.

That’s the clan riding on Sunday.  If we had a club this would be it. But we don’t. Which is kind of the point. People transcend constructs.

*not quite a verbatim citation but if François-Marie Arouet was still with us, I believe he’d nod that through.