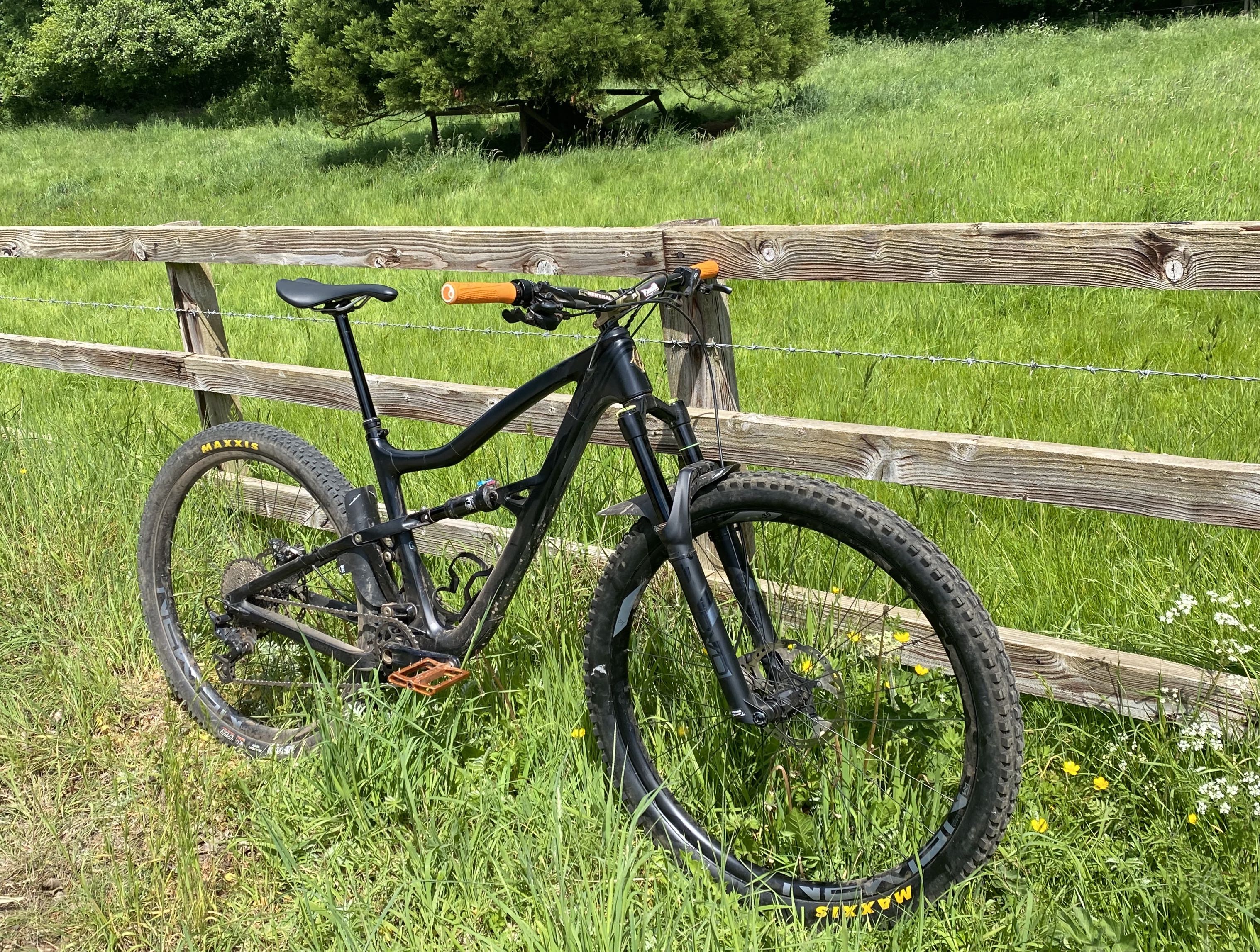 That last post? Garbage. An excuse paints a thousand words. A flawed concept visualised by graphing enjoyment on the X axis and risk on the Y. As if there is something formulaic about riding mountain bikes. Conflating safe language from grey organisations to barely moderated lunacy under blue skies.

No do not adjust your reality, I am indeed arguing with myself*. And yes that particular feature remains unridden. I went back for another look. Unsurprisingly its ‘do you value your spleen?’ vibe remained undiminished on a second viewing.

The only way I can see myself riding that is by closing my eyes whilst simultaneously executing the advanced MTB move known as the ‘precision clench’. Maybe blind and drunk could work. Sober and eyes open it’s not going. Not yet anyway.

Let’s not dwell on my failures. Except the small matter of fitting a third tyre to the Ripley. I wasn’t keen on the first two which is odd since I’d paid good money for both of them. This didn’t stop a somewhat tread-worn replacement being dug from the spares pile in an attempt to improve front end grip.

50% chance of fitting it the right way.  Born on the wrong side of the law of averages, I made a poor choice. Not sure it makes much difference but let’s not understate the power of placebo. Flipped it round, poked various components, prodded others. Accepted the problem was the organic side of the partnership.

Let’s test that out on the Wednesday ‘Night Ride’. It’s neither night nor the dark and grim of winter. We assemble some two hours before the pre-lockdown roll call. This time last year a plethora of bikes would rest line astern waiting for the perennial latecomer**

Not now, it’s all socially distanced and following those government guidelines the government fails to follow***. I miss riding with the boys, the banter and – oh god please let it be open soon – the pub. But we can still have fun especially if Matt is having an off day, and I’m as close to the zone as an average Joe can get.

That’s not actually in the zone. Oh no, we’re escorted back to the ‘friend zone’. That other zone – sure you can see it, you might have an idea what it might feel like based on what others tell you, but you’ve never been in it. That’s fine. No, really it is. Because getting close feels like this.

Off the top, all over the place. The front tyre swap has not done the trick. I wave at apexes as they perambulate in an arc entirely distanced from my front wheel. I throw some shapes under the tree shadow. It might be the wind but those trees appear to find that amusing. Snickering in the leaves.

Come on Al, you’re not great but you’re better than this. For fucks sake just stop overthinking for a second and find a moment to live in. That’s tough because the trails have come full circle. Between deep mud and marbly dust is loam; hero dirt, grip nirvana with heavy particles thrown sideways by a sliding tyre.

It’s not like that out here. It’s as loose as a mid-winters today only with higher speeds and more leaf cover. Two options on the steeps; accelerate to a velocity that’ll brand a tree with a random limb, or grab the brakes and slide into the same destination at a similar speed only with less steering.

Conditions then entirely suiting my legendary handling skills. Sent Matt out first and to my great delight he blows the first corner. ‘Apex 6 feet to your right’ I shout helpfully as he crashes through the undergrowth. He’s back on it tho and I’m chasing hard.

Our mate Sean built this trail. Originally as a climb. So it’s mellow at the top. And that’s good because of the five tightening corners which draw you in so they can spit you out. You can’t bully your way through, stumps, branches and the odd rock make this a precision attack.

Crystal Maze made real. Make a mistake and it’s going to hurt. But building gyroscopic forces make that risk unreal. Because any kind of risk appetite wouldn’t have me flipping the bike hard edge to edge. Forget grip, go with feel, fully commit to the turn and sense that elusive zone. I’m still not living in the moment but I’m thinking if I can ride this well today, why can’t I do it everyday?  Well, reasons, so let’s move on.

There’s loads more to enjoy, open then closed turns slicing through the forest, bench cut singletrack hanging to an edge, ballsy moves through tree stacks lacking the requisite 780mm clearance, steep roll ins with dirt replaced by sand, off camber madness offering you a punt into the valley if you don’t keep your shit together.

And when you do, you arrive a bit knee trembly at the bottom of the valley. Behind me dust motes are backlit by a late afternoon sun. Ahead of me is a twenty minute climb so we can start anew on a different trail.

I’m like that five year old kid happily spinning round while shouting ‘again, again’.  That’s what mountain biking does for you. To you. Keeps you young. Makes you an idiot. Forges some kind of legacy.

But not yet. This feels like an endless summer. And for all the shit that is both going on and coming, that is something worth celebrating. As my good mate Si says ‘Ride fast, take risks’

I’m good with that because there are limited summers left to make that call.

*the older I get, the more this happens. My plan is to contain it in public places. As it’s not much of a step from there to necking cheap cider and shouting at buses.

** Jim. Turned up early once in an open act of trolling. Never happened since. Works off an entirely different calendar.

*** I am so monumentally pissed off about this, I nearly turned the blog over to political discourse. Then I remembered it’d make fuck-all difference, so I stuck to bikes.