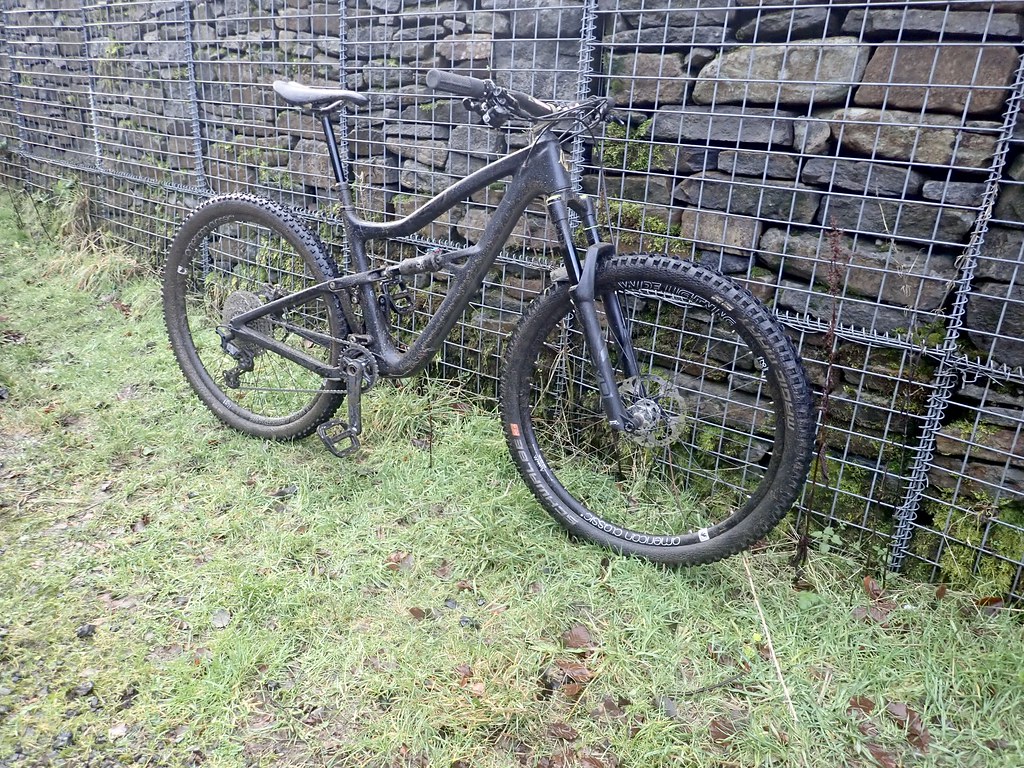 There are some things I’m quite good at. Yes that’s a short list rarely intersecting with activities associated with being a functioning adult, but this doesn’t stop me getting excited when I’m ready to unleash my superpower*

Today it wasn’t wowing a quiz night with my narrow but mostly encyclopedic knowledge of the Battle of Britain,  or exactly how stupid it is correlating poorly thought out hypothesis from low quality datasets**

No today I’m bike testing. Not to be confused with published reviewers and their proper riding skills, critical faculties and ability to torture the English language when synonym chasing ‘laterally stiff and vertically compliant’

My attributes tend more to the experience of a shitload of new bikes. Many of which recorded their inaugural rides at Cwmcarn.  Now there’s a correlation I’m entirely comfortable with.

This Ripley should feel like a denuded RipMo. It really doesn’t. It’s closer to my brilliantly flawed Orange ST4. The suspension travel is similar, everything else is different. The Ripley is way stiffer, had many less gears, a steeper seat angle, a shallower head angle, wider bars, shorter stems,  longer dropper post and that’s before we get into the details.

But we don’t have too. Because while I cannot with an ounce of credibility describe how a bike rides, I can make a decent stab at how it feels.  It feels like this;  instinctive, telepathic, mated –  I accept this may be nothing more than wooly arsed new bike justification . But there is something here. The endpoints of what a class leading MTB can do are gapped by your average Joe failing to execute a thousand YouTube videos.

Aiming at those targets the heart of the periphery. It’s about feel. Some bikes are amazing and aloof. You do your best, yet they mock you with coldness and disdain. They wait impatiently for the better rider.  Your best is never close to being good enough. These are not the bikes you are looking for.

The Ripley is. It shapes the riding experience in all sorts of interesting ways. Most of which have nothing to do with traditional metrics.

I wasn’t any quicker climbing but I was a bit less worried about a heart attack. Some of that is the bike sitting high in its travel, some of it was the 50T cassette I’d gone from hate to love in about 10 pedal strokes. A bit more was a build prioritising trail over Enduro.

Meh, climbing is climbing. It goes on for 45 minutes and then there’s nothing above us other than a winter sky. I usher the fast boys through and hang on to their rooster tails. Somehow this isn’t the same problem as the one I fail to solve on pretty much every ride we do.

New bike thing. Not hungover thing. Others being hungover. Blind luck. Occasional ability. Ego bravery. Easy trails. Later in the day I was properly gapped when others co-located themselves with their shit. This hardy mattered because what I cared about was differentiating this new bike from my RipMo.

It’s not huge but it is significant.  Turns faster, gets you into trouble quicker, assumes you have the chops to get out of it. Pumps and pops on anything micro-rooty and above, makes you feel like a proper rider. I didn’t feel very fast but fuck me I was having a whole lot of fun.

Our two younger companions refused to accept there was another trail to be ridden. Old sweats Matt and Al cracked on in a manner rarely associated with men on the wrong side of 50. As an aside, I never get the trail centre snobbery.  It’s just a brilliant way to spend your time when your local trails are underwater.

And spend we did. Giving up gravity credits on first a rocky ledge and then a flat out berm-y blast to the carpark. Familiarity nearly let to contempt after a bold apex choice catapulted me centimetres from leaving the trail entirely. Where stumps and rocks waited to impale an important internal organ.

Backed off a bit after that so never came close to catching Matt but every second separated me from adulthood.  There’s no space to worry how old you are because you’re wondering how fast you dare go.

Strava told me I was a little faster than previously. It shouldn’t matter but it does. More important tho I felt comfortable at a pace best thought of adequately brisk. Which is already a win as wet and wild are not my favourite conditions. But the bike just wanted to go and I wanted to go with it.

That’s the crux, some bikes feel connected, others feel distant. Some bikes encourage you, others treat your efforts with studied aloofness. Anyone who doesn’t feel this needs to buy a metric shit-load of new bikes. At which point feel free to get back to me.

Yet there is nothing definitative about a single experience like this. It’s new bike glasses, not ridden for a week glasses, riding with your mates glasses, glass being half full basically. But even so I’ll take it.

In summary I’m very happy with my Christmas present. I hope you’re as happy with yours.

**that’s really a thing. It’s not a big thing, but a thing it is nevertheless.