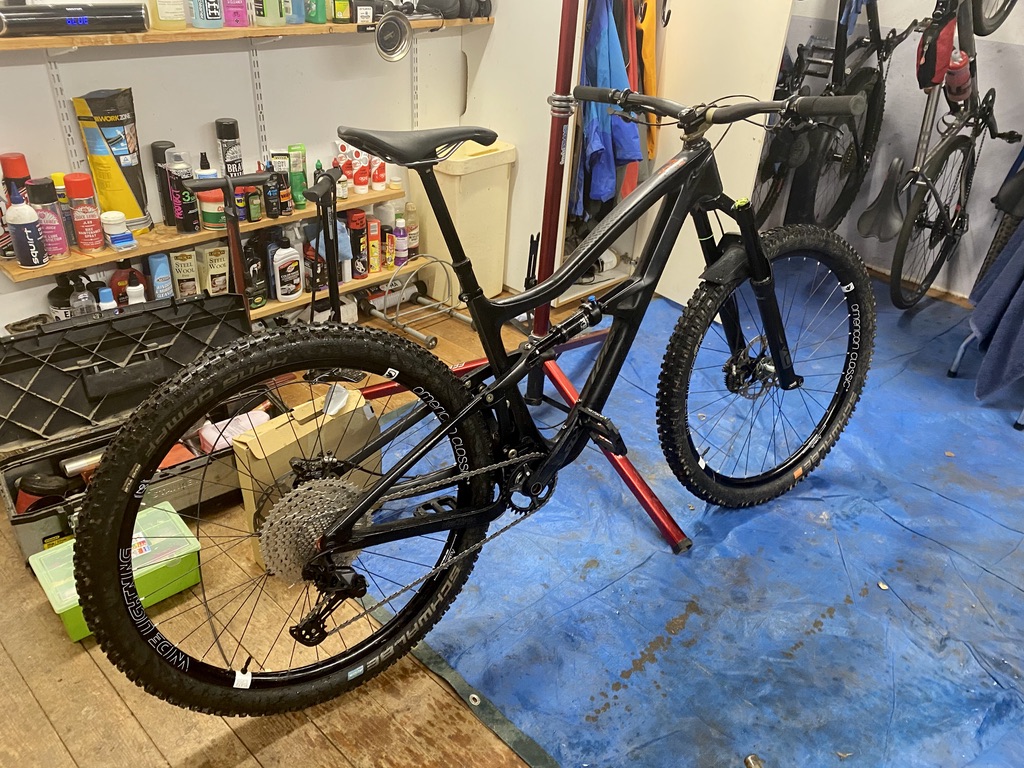 There’s an entire YouTube channel devoted to ‘dream builds‘* where artisan craftsmanship and stroking of beards summarises the content. At no point does the protagonist throw a tool at a loved one while screaming ‘there is a special place in hell for the UTTER BASTARD who spec’d this 2.5mm allen cheese-bolt‘

Of the 49 bikes I’ve owned**, I’ve built about half of them. If a film were to be made of such heroism it’d start with a wide shot framing a thoughtful man considering one of many well catalogued tools.  His demeanor would be the metier for mechanical competency.  As the camera moved closer, the focus would be pulled to a naked bike frame awaiting the touch of a master.

That film would end with in a melee of hammers. Viewers would be put in mind of 70s rock gigs where the band would smash their instruments over the stage, the crowd and each other. The camera would pull away to reveal shattered carbon shards splattered across the once pristine workshop.  The movie would fade to a static image of one man wildly swinging an angle grinder while shouting ‘2.5 mm cheese bolt? That fucking showed you you Spunk-Trumpet‘.

I think we can all agree that’s at least a three season Netflix series in the bag. Working title ‘To a man who owns only a hammer, every problem just needs smashing to make it a bit smaller‘.

Since moving here, my good friend Matt has taken the hammer from my hands and replaced it with a beer. He has all the mechanical skills I lack, and an approach to problem solving a little more nuanced that my ‘Oh for fucks sake, I am vexed, pass me something which needs a good twatting’.

Some builds have gone better than others. The ones without hangovers generally. None of those nearly ended with me coming close to losing an eye after a sticky piston rocketed out of the caliper I was leaning into. That’s the venn intersection of compressed air, a stupid idea and about three sober brain cells.

Today though we were both sober but Matt was a bit sick. I helped out by explaining I’d checked his symptoms out on reputable Internet sites and the conclusive diagnosis was Cat Aids. And not the good type. At least I think that helped.

What didn’t help were a whole load of problems separating a frame from a bike. Some of these we knew about including the parlous state of a set of wheels long campaigned with no servicing respite. Since they weren’t totally broken, we decided the best approach would be continue to ignore them and move onto something easier. 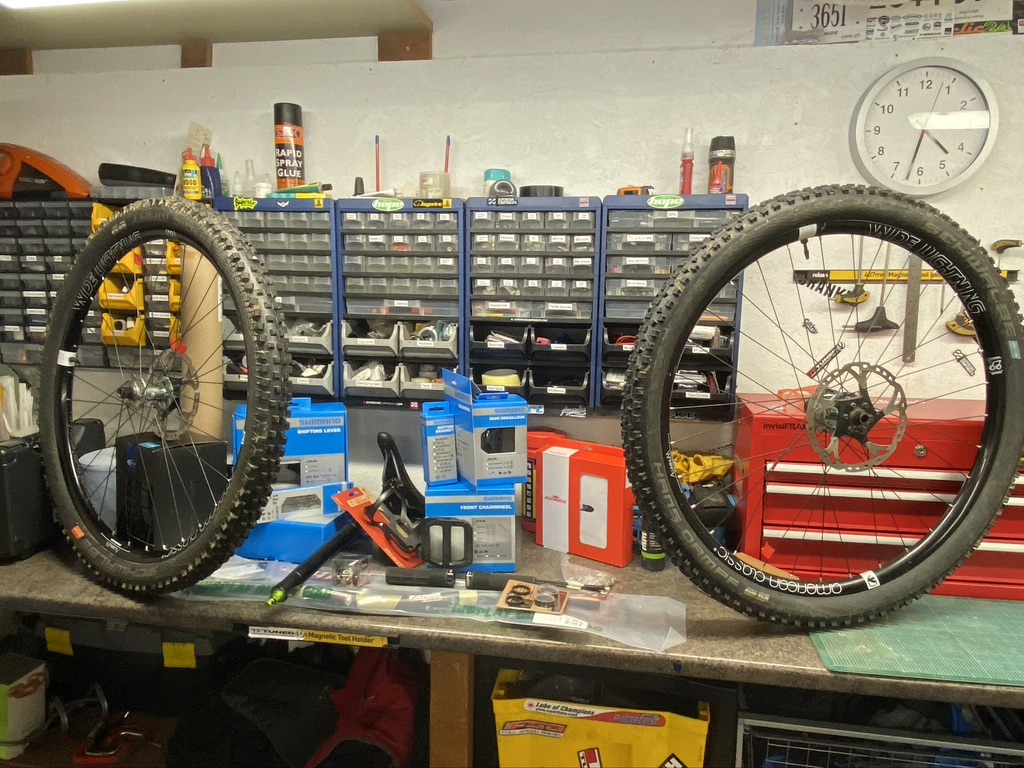 Which wasn’t the ‘simple task’ of reducing fork travel on a chassis beautifully engineered but heavy on the loctite. We didn’t have the right tools but we did have a Matt and he dreamed up a solution way better than the hammer twitch I was going with. 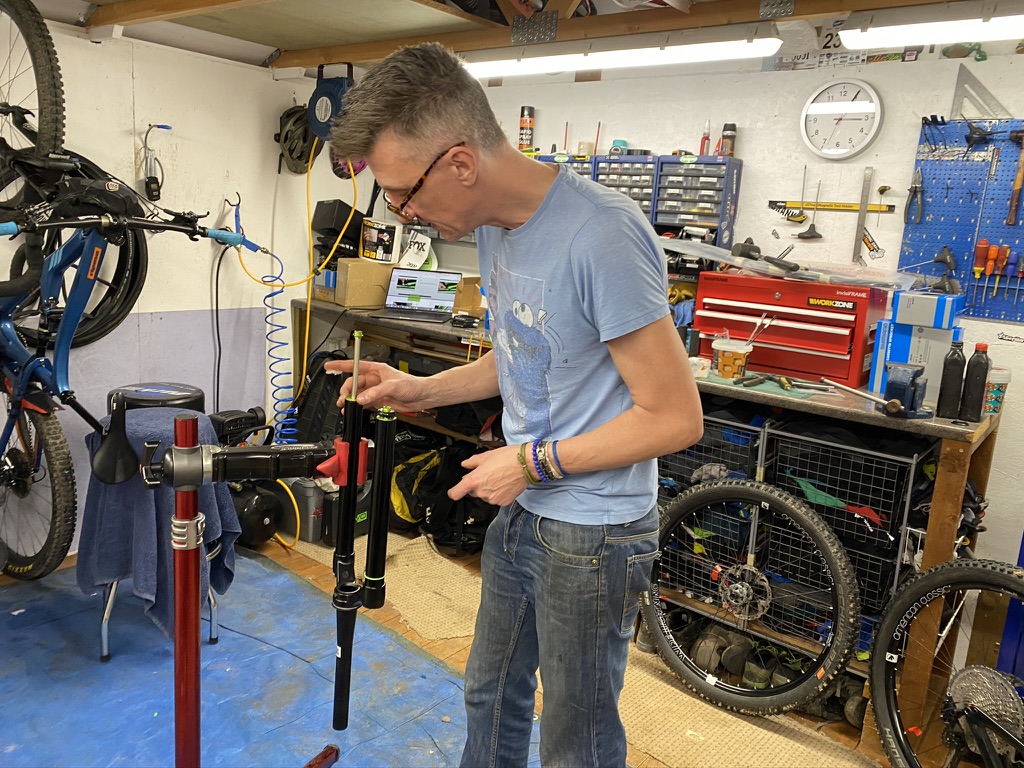 We then embarked on a long and tedious examination of the ‘World’s ugliest cassette‘ which appeared to be modelled on a dinner plate. If dinner plates were made of heavy metals. When I got into this whole mountain biking gig it was a max of 32 teeth out back and 44 up front. Now we’re in this ludicrous situation where 32 represents your only chain ring option, while some mechanical savage has decided 50 teeth on a cassette is officially a good thing. 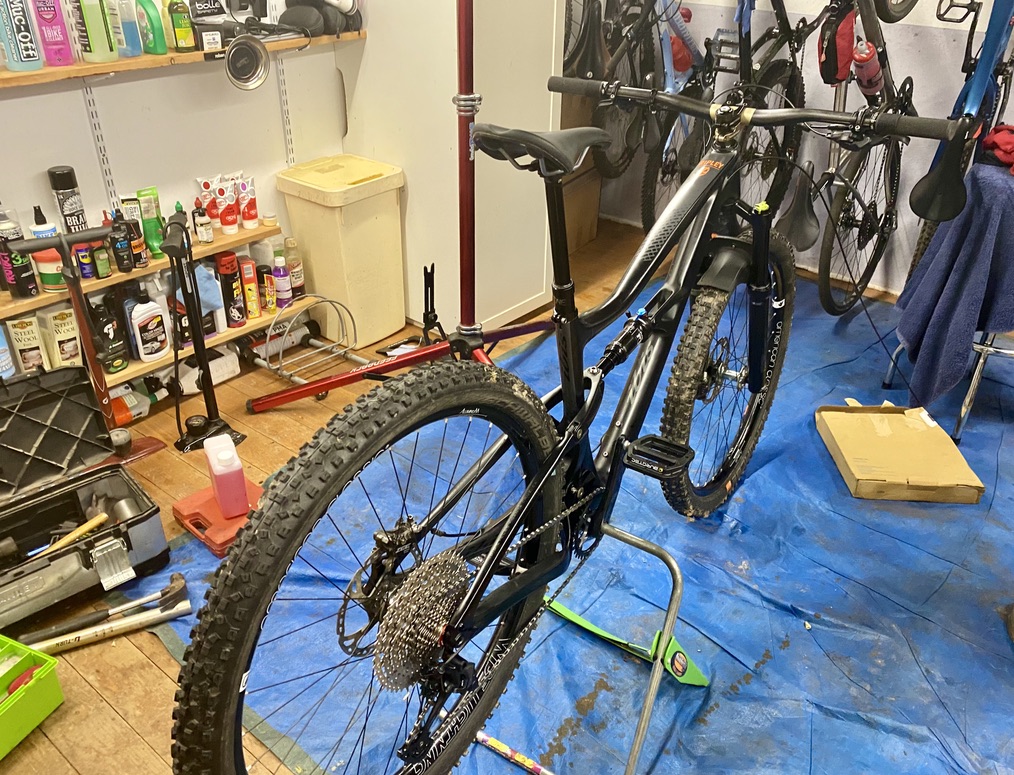 It bloody isn’t. Indexing was happening to other people. Until we gave up being blokes and read the instructions. This calmed down things a bit with us ending up with most of the gears almost all of the time. This is a temporary aberration while I think of a good excuse to buy some new wheels. Right now tho I have a transmission that is both embarrassingly huge and useful for eating my lunch off. 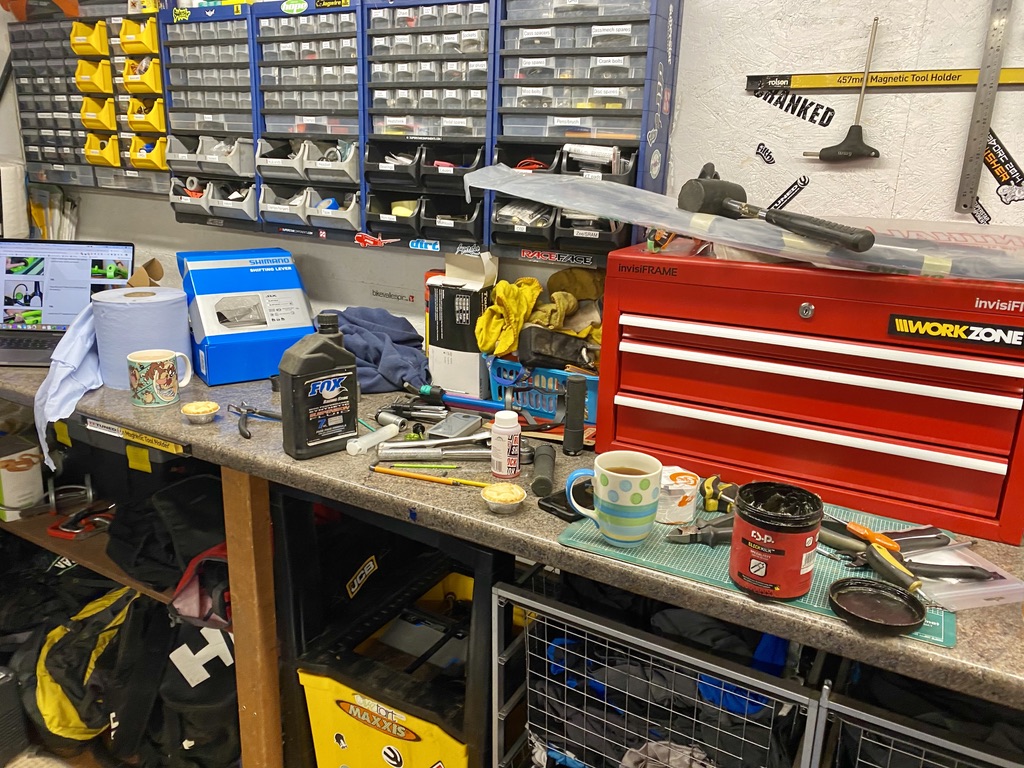 We skipped lunch and powered sustained by nuclear coffee and seasonal mince pies.  Having ignored the multitude of wheel issues, we extended our strong displacement game to too short brake cables, missing brake shims and a variety of other annoyances that’d defeat lesser men than us.

Well lesser men that Matt. I spent most of the time desperately looking for the bench. A bench which was now strewn chaotically with every tool I own and a few of whose provenance I have no idea. Most of which were floating in an expanding film of suspension fluids. 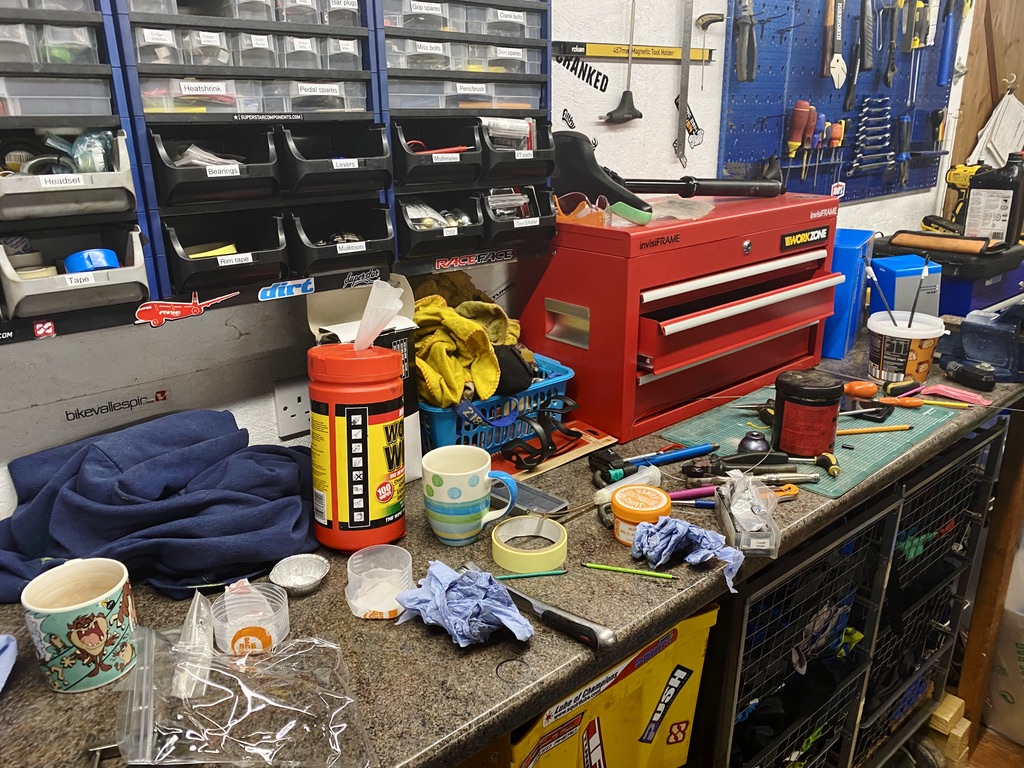 I wasn’t sure if to clean the bench or just torch the bloody thing. While considering my options, Matt told me we were done. Really? How the hell did that happen? Nothing to do with me. All I could offer was was to stick a helmet light on and strike out into the rain, which started in October and has yet to stop. 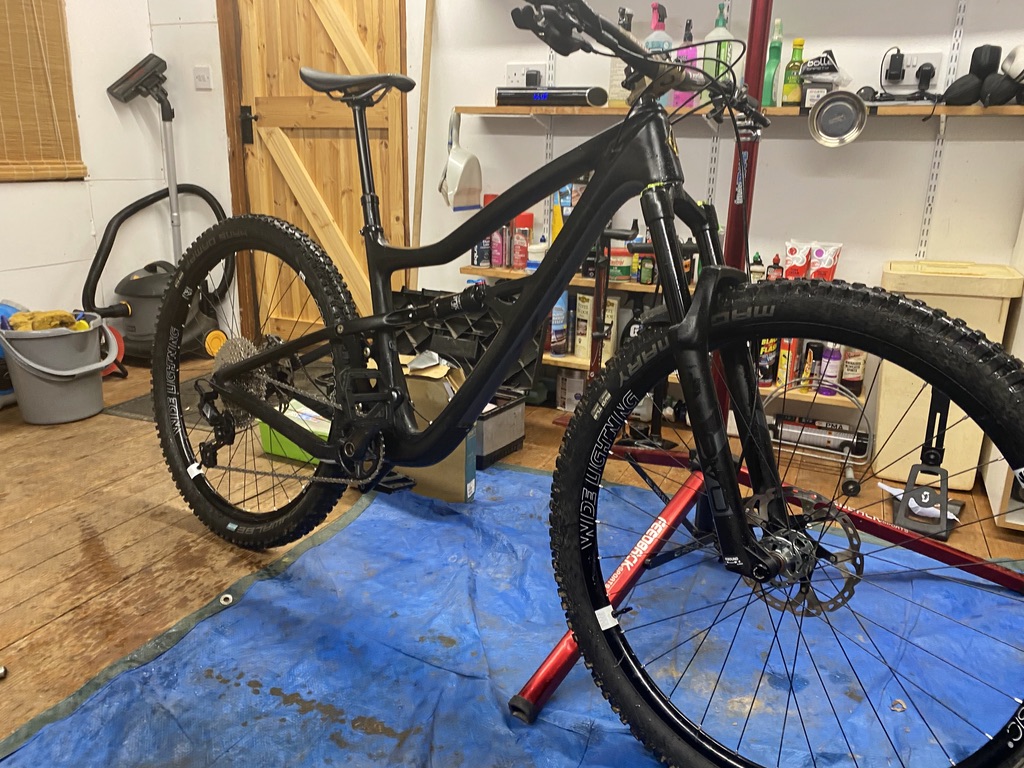 What did I learn? Riding without a rain jacket even for a few minutes is stupid.  What else? Not much other than this is not a mini RipMo. I’m not sure what it is, but it isn’t that which is a bit of a relief. 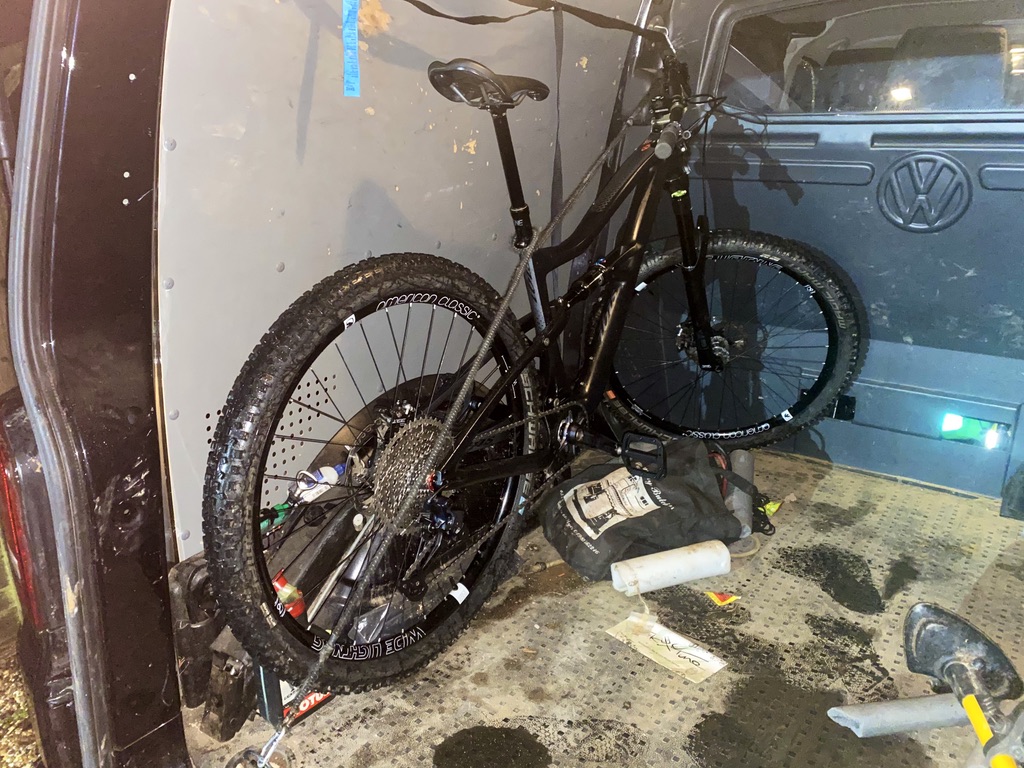 Tomorrow we’ll be back at Cwmcarn. My stealthy black bike will fade to brown. That much is known. Not much else is.

But I expect I’ll enjoy the experience. I have the previous 48 times.

*no really there is. It has inspirational music and everything. Almost no one uses a hammer.  I can’t believe anyone thinks it real.

**Okay rented. Still getting to that post. The analysis is epic. Trust me on this.