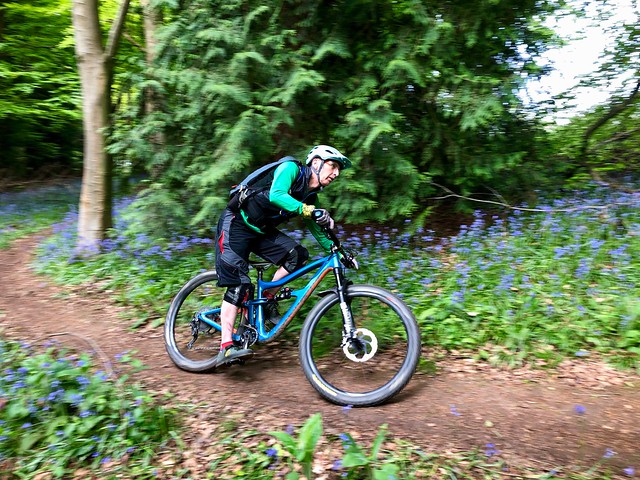 Welcome to the Western chapter of ‘Angles Anonymous’. My name is Alex and it’s been 15 years since I properly railed a corner.  Chronology matters here. I wasn’t the best descender in 2004 back when I had two fully functional  knees. Then I nearly didn’t after an accident which left me a hairs breath from leaving hospital in a wheelchair.

Physically that was a fairly intense time. But you heal. Externally for sure but mental scar tissue goes all 5th columnist on your muscles. That’s ignored when you’re finally back on the bike decoding a ribbon of singletrack firing synoptics at high speed. Dendrites flood your neural cortex. Tendons tense. Visual cues switch chaos for muscle memory.

You know how this goes. A hundred thousand corners groove the process deep into your conscious. There’s a rapid assessment of trail conditions, of grip, of camber, of terrain balanced with a quick check of your bravery coefficient. Divide X by Y, line up appropriate biometrics and push hard on the inside bar.

That’s a push into the fourth dimension where the confidence pixies fire up the adrenaline compressors. Where physics meets geography. Where that edge threatens to throw you off, but you laugh it off and risk the abyss. Oh hello righteousness I’ve missed you from that hospital bed.

It didn’t go like that. It went like this. See the entry, remind yourself what happened last time, worry a bit, grab the brakes a bit more, bottle the apex, blow the exit. Watch your mates ride away. Spend some time in the land of self loathing.

Being an analytical sort of bloke the answer was clearly crossroaded at a happy place between quantitive and qualitative thinking. A hundred YouTube videos and a couple of skills courses left me instead somewhere between annoyed and deeply fucked off. It wasn’t happening. I couldn’t trust the tyres, the forks, the geometry enough to even slightly push it.

That’s bullshit of course. What I couldn’t  trust was myself. That mental  scar tissue was binding my ability. Not helped by the getting older and not bouncing quite so well. Entropy is a total bastard what with it travelling in the wrong direction. I was running out of time while riding like a man who was so concerned with crashing he’d forgotten why he’s got on the bike in the first place.

Relearning is pretty much new dog old tricks. Motorbikes taught me go hard on the inside hand.  Skills courses insisted outside pedal down. Everyone quick says look where you want to go. It kind of worked until it didn’t. I rode sketchy stuff hanging on to better riders and then lost them on the next turn.

15 years should transition you from anger to acceptance. For me tho it’s just continued to piss me off. I’m doing the hard stuff, but I can’t ride those corners in the  Venn of fast, risky and amazing. And maybe I never could again. We’ve done denial, let’s move straight to grief.

And then a forum thread full of fuckwits awash with advice best thought of as clinically insane furballed out a video recorded back in 2012. Straight headtubes, Non bolt though axles, no dropper posts. Based on current marketing convention they were lucky to survive the 2 minutes 54 of hamming it up.

The ham was strong. Talk of ‘laser peckers’ and ‘pointing the penis’* nearly had me hitting the X,  but lost in the misogyny was the concept that hips were a key player in cornering. Was this the missing link?

No. And Yes. And no again. We all point things at things** when riding bikes. Some of us do it naturally. Others overthink it. I’m in the second camp attempting to sequence non linear actions into some form of success strategy. It’s always felt – post smashing myself up – contrived and ineffective.

Hips tho. Even old non articulating hips.  Point them in the desired direction of travel and feel the whole biomechanical structure creak into place. I kind of knew this but what I’d missed was leading with the hips stacks everything in a direction mostly likely to punt you out of a corner a) quite quickly and b) not straight into a tree.

With nothing to lose other than a innocent spleen, I decided to give it a proper go. Not a slight shift of the hips, more a full on point and – if things went well – a ‘woot’ to confirm success. First corner, commitment a bit questionable and I grazed summer shrubbery far removed from the dusty trail.

For fucks sake,  had a word with myself.

Next corner went ‘full pointy’*** which has some consequences. One was facing in an entirely different direction without quite understanding how that might have happened.  Bloody hell that’s a thing. How long have I  been riding bikes? Surely someone should have told me.

They would have told me this. It’s not a panacea. It does not swap technique for bravery. It doesn’t work everywhere. It needs to be learned. But when you do, the whole ‘am I doing the right thing ‘ is replaced by ‘swivel those hips and all while be well’

Let’s  not get ahead of ourselves. It’s an evolution not a revolution. It’s codifying stuff I already know. It may not survive the soggy season. It doesn’t override my fear of spending days back at that hospital.

What it is tho is a reminder of why I do this. Of waving the big fuck off to being 52 years old and still riding at a reasonably brisk pace. Of not confusing those years on the planet with a loss of ability. Of never stopping learning nor thinking there is something important about acting my age.

Hi my name is Alex and it’s been three days since I railed a corner. I’m done with this group. I won’t be back.

I’ll be riding. Not worrying. Not overthinking. Maybe not railing a corner but giving it a damn good go.

Is that enough? You betcha.

*amazing really with content such as this that women are not overly represented in Mountain Biking.

**I don’t want to lose my audience here by getting too technical.

***As much as a middle aged man can. Fully articulated hips happen to the next generation.