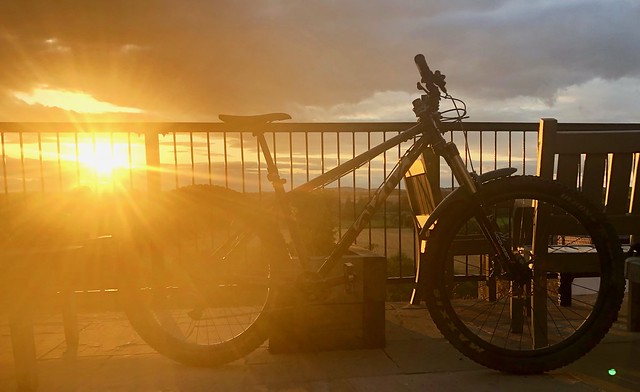 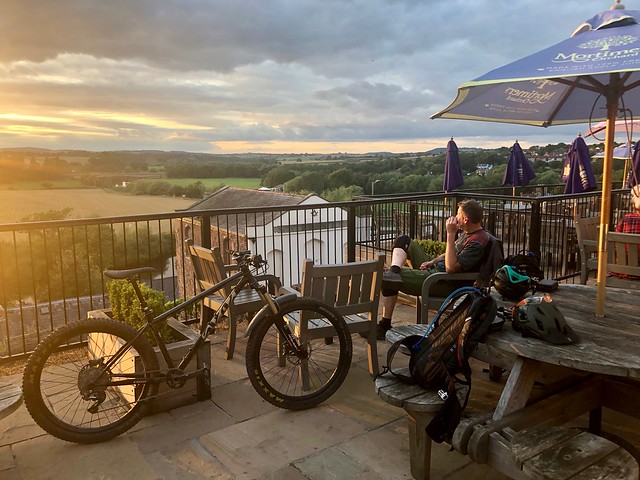 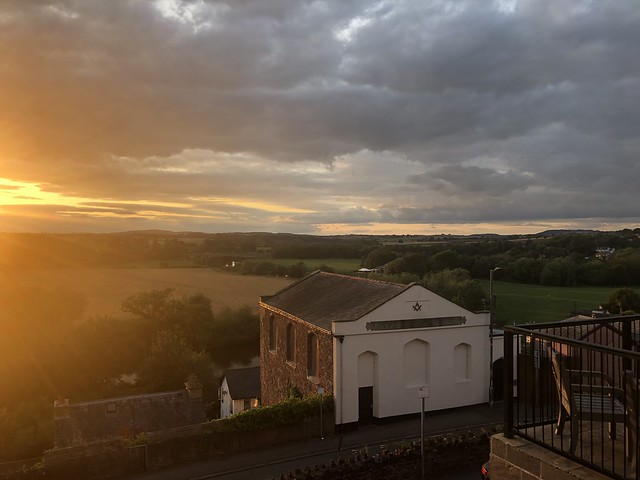 The day didn’t start well. The planned skive ride stopped before it started. The potential back up afternoon ride was similarly sacked off. Work stopped play, and that’s not a call a man with limited years left to ride and total control of his own diary should ever have to make.

The Wednesday night ride stepped up to take in the slack and was nothing short of awesome. The Wye Valley is so preposterously stunning in summer there is no place I’d rather be. You point and click in any direction and end up with a banger. That’s the picturesque landscape doing all the heavy lifting.

A landscape you get to ride in until you run out of light. Then there’s the pub you get to drink in. Until you run out of money.  We’re on the cusp of artificial light buttressing the sinking sun, but we’re not quite there yet.  That’s a reality tinged with sadness as our little part of the planet turns its face from the sun.

But we’re hanging on. To dusty motes hanging in sun baked stillness. To bikes air brushed with dust. To summer lines and endless grip. To T-shirts and sweat. To knowing it’ll be many months before it’s this good again.

So let’s get amongst it. The local trails above Ross are of questionable legality. And that’s stretching the most charitable definition. The shovel pixies are both skilled builders and passive advocates of Marx’s firmly held view that all property is theft. I have concerns from both sides, but bloody hell they’ve created a mini bike park which repeatedly pokes the fun gland.

It’s a small hill. One ten minute climb to the top and maybe two minutes down. Rinse and repeat. Trails snake left and right with clear progression from the flowy and fast to the frankly ridiculous. There’s one steep rock drop matched to a roll out you might as well name ‘busted collarbone’.  I’m not riding that.

I am riding everything else though including a big gap jump I’d been studiously ignoring for a year or so. I’m a man who works best with a margin of error. Preferably half way across the page. So why I attempted this on my hardtail is beyond me. Caught in the moment I guess. Oh and that bike is beyond awesome. It looks like a normal bike but rides like a champion.

There’s some steely magic crafted into Cotic Bikes. Tonight I’m all cantered hips and dragged rear brakes. It’s point and shoot silliness that never gets old even as I approach my 52nd birthday. There are moments which transcend the whole age thing. Just you, a brilliant bike, a bit of confidence, a mate to chase and dust particles to excite.

In the words of Jo Burt, this is why. It’s easy to stuff your head with lyrical earwax when you’ve had a great ride, but there is something to this. And it’s something like this. It’s Riding Evo. It’s a slightly braver version of who you are. It’s pushing a bit harder and not being scared. It’s feeling the tyres giving up but cracking on anyway. It’s taking the accident out of emergency. It’s as close to living in the moment as any of us get.

I just wanted to keep riding with my mates. I love the bullshit and the banter. I love the fact we’re all very different and yet somehow all the same when we ride bikes.  I love – because I’m as shallow as a tea spoon – better riders than me saying ‘Shit Al, what are you on tonight, that’s proper quick’.

I know what I’m on. Adrenaline chased with a dopamine hit. This is what I love about being an average rider. Because when you get it right, when confidence seeps in and anxiety exits stage left it feels amazing. You stop feeling like a fraud, a credit card rider, all that gear and still no fucking idea. You get a glimpse that this is how great riders feel all the time.

And I don’t want to be one of those. Really. It’d just have me chasing the next level thrill. The more stupid. The desperately difficult. I don’t need that in my life. What I need instead are nights like this when good enough is so much more than good enough. When I’m nailing every apex, feeling – really feeling – what the bike is telling me, pushing just a little bit harder and laughing out loud as the bike rails a corner or nails a jump.

Yeah like the landscape, the bike is doing the heavy lifting here. But I’m close enough to steal some of the glory. And what a thing that is.

We’re drinking cold beer watching the sun set. It’s not even 9pm. Summer is rushing into Autumn. The cold season awaits. But just for today, just for a moment, it’s perfect.

The best of days.

2 thoughts on “Best of days”