Robert Stevenson’s novella has infected one of my mountain bikes. It’s all ‘oh what a lovely well sorted trail bike’ until someone has a nasty accident. That someone being my mate Tim who took ‘the snapper’ out in Finale apparently to test the breaking strain of his tibia.

For more on that, you’ll need to arm yourself with a copy of this quarters www.cranked.cc and a strong libation to numb the gory bits.

Coincidence I hear you mutter. Oh I think not after the sadistic bastard had a stab at separating my arm and shoulder last weekend. Ah you mutter on, but you’re always crashing you useless twat. Yes well there’s something in that, but work with me here. At least let’s agree that all bikes have personalities.

What? You’re not even throwing me that bone? Tough crowd. Look they do, my Solaris Max is basically a puppy amped up on a sugar rush, the RipMo is a calm explorer fearing nothing of scary landscape and the Orbea is just, well, mentally unstable. And like the worse kind of nutter, it lulls you into that false sense of security before making strenuous attempt to bite off your nose.

I’d not ridden it much before Tim lunched himself into a innocent tree. Strangely it’s not been granted day release from the ShedofDreams since. It’s just hung on the wall bullying the other bikes. Sufficient time has now passed however for firm knowledge to soften into conspiracy theory.  Last week I extended a tentative hand of friendship with a ride on our local trails. All alone in case it felt the urge to murder someone else.

Of course it was fine. Dr Jekyll in control. I still wasn’t sure I liked it much, but that was less about it’s dubious character and more that it’s very different to both my other mountain bikes. It climbs like an absolute mad bastard for a start.

Efficient, I thought, gets you to the top of the hill so it can kill you quicker. Down tho it’s only not brilliant because I am not brilliant. 150mm of travel both ends, decent angles, somehow both taut and plush. Not massively engaging. Not sure why.

I rode for two hours and wasn’t obviously dead. In fact it’d been a bit of an anti-climax. Like all the other times I’d ridden it. All 7 of them. Maybe  Tim’s accident and my whole ‘Holy Shit here comes Edward Hyde’ was nothing more than displacement activity.  Best find out.

I should have known. The day before Tim had an extended session genuflecting to the Shrine of Mong, he was riding like an absolute demon. I’ll be honest, I’d never ridden the bike that fast, but once switched from his 29er Ripley and within a few trails he was having it fairly large. A bit annoying really as we’re normally closely matched but I was – and there’s no kind way of saying this – getting my arse handed to me on a plate.

It is a fast bike without doubt. 2 hours into our long weekend ride, I started to finally gel with it. Rewards a bit of commitment for sure, but otherwise it’s pretty much vice-less. Until it wasn’t. Heading onto a trail we rarely ride, Matt and I had on of those exchanges.

Him ‘Do you want to do that shit jump?  I’m on holiday next week and really don’t want to crash’ Someone else ‘Ah come on we’re here now, it’ll be fine’. That someone was me. Mr Hyde was clearly in the driving seat. My cautious self still retained a modicum of risk assessment tho, so ‘But only if you go first’

Normally this stops me hitting jumps too slowly. Today however Matt decided to adopt a bit of an Al-Approach. There are good reasons for this. The run in is okay but that’s as good as it gets. The take off exits two wobbly logs bouncing on a decaying tree, while the run out narrows alarmingly with trees left and right ready to stop you – if not dead at least mildly concussed.

A normal me would have abandoned after watching Matt extract maximum value for his 180mm forks on landing. He wasn’t troubling the 180mm on the back much. I didn’t trouble mine at all having rolled off the 3 foot plank with only sufficient velocity to outrun growing vegetation.

I landed in some a second or so later. Having realised this was a classic over the bars arms out/collarbone at risk crash, I snapped into ‘full tortoise’, hit the ground with my head and shoulder before rolling painfully into the bushes. The bike lay beside me looking pleased. Yeah Ed, you total bastard you got me that time. 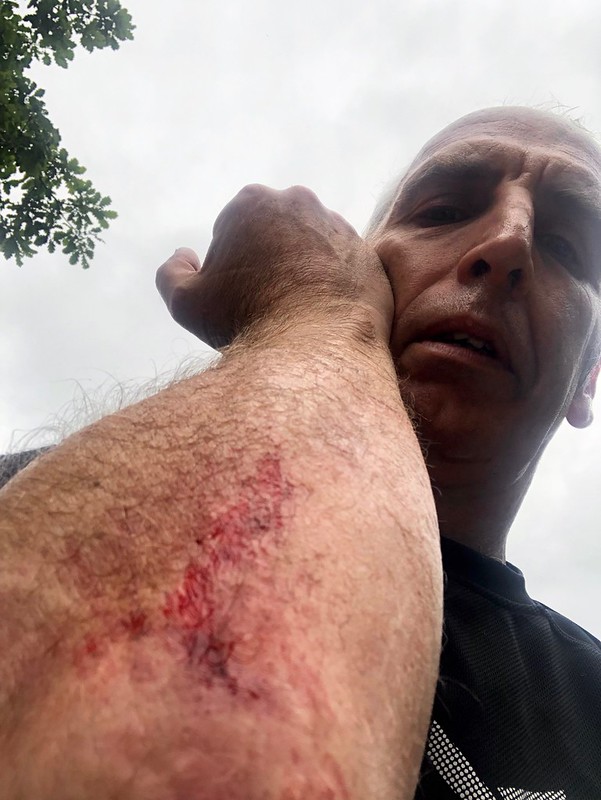 Haydn persuaded me not to have another go. The bike looked disappointed. It was sure it could deal out more than soreness and scars given another chance. I gingerly rotated crunching bones and decided this was the correct course of action. As was not blaming the bike.

No bike would have saved me. Rider error 100%. The rest of the day went absolutely swimmingly. Literally when I found a ridable line through a pit of mud Matt and H had failed it clear. It was a pyrrhic victory though with my reward being head to toe fetid moistness.

The bike however was great. The more I rode it, the better it was. So sure now that its split personality was nothing more than an excuse, I punted it round the always-brisk Wednesday night ride. And you know what? It was bloody fantastic. Grip, poise, agility. Three out of three. Loss of limb. Zero out of one.

Watching the sun set blood red on the dusty frame, I couldn’t help but conclude that lunacy was definitely involved. But the one barking* at the moon wasn’t the bike. It was me.

So Dr J is a keeper. Mr H can fuck off tho. That crash bloody hurt.

*more giggling to be fair. It just doesn’t scan as well.