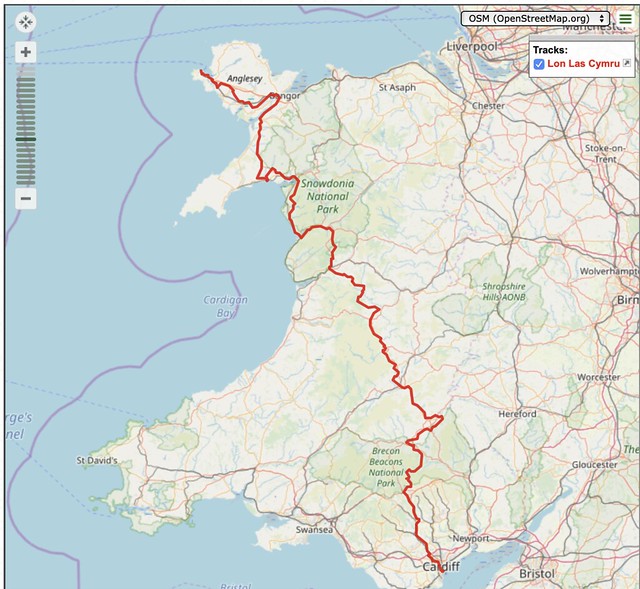 Trying to summarise the experience of Lon Las Cymru is not so easy. Far too much stuff going on, some of which needs a bit more time to think about. But here’s what I’ve got so far.

Is it a good route?
It absolutely is. Sustrans and all the associated groups should be congratulated on both creating the route and keeping it maintained. The signage is great across most of the route. The route itself keeps you off the main roads and sends you through all sorts of interesting places. Sure you do more climbing than the main drags, but that’s kind of what you sign up for.

I’d still not do it without a GPS though. Sometimes the signage is missing/hidden under vegetation/hard to see, and having turn by turn navigation makes life so much easier.

Staying off the main roads made it for me. The whole club chaingang on some busy A road is something I’ll never want to do.

South to North or..
No South to North, The way the climbs are set up, this way is far better and you get that monster descent into Mach. It’d possibly be quicker North to South but that’s hardly the point.

Road bike or Gravel bike?
Assuming we can get beyond definitions, I’d say Gravel bike. Not that I’ve ridden it on a road bike, but I have ridden road bikes and the route definitely is not all road. Some of the non road routes are well surfaced tracks, but there’s a lot of gravel, lumpy tarmac, bits of mud and even some decent sized rocks. 23c tyres at 100PSI would be faster no doubt, but the bikes we rode – I think – were more fun.

Adding 15lb of gear makes the original weight fairly irrelevant. I liked the stability of my bike, it’s ability to handle the extra weight without me really noticing, the width and tread on the tyres, the relaxed geometry and the more upright riding position. Sure it’s not aero but it’s bloody comfortable. And Hydro’s. Wasn’t sure they were needed on road based bikes. No longer think that, Absolutely brilliant.

Better than Mountain Biking?
Oh. Contentious. I’d say No but not by as much as I thought. It is very different. Really a venn diagram with only a two wheeled form of transport at the intersection. I’ve ridden a lot of MTB in South and North Wales. But I saw so much more on this trip. Not just because of the route but also because I wasn’t trying to get to the next descent as quickly as possible. It’s less scary so the dopamine hits are less obvious, but the sense of satisfaction finishing a big day shouldn’t be underestimated.

I do love the purity of the endeavour. Just get on and pedal. No forks to fettle, no shocks to set up. Although I missed the dropper post. There’s something here that makes these bikes way more fun that – to me – a standard road bike. I don’t know what it is but I like it. A lot.

B and B or Camping?
Oh really. We saw a few ‘fully camped up’ riders and that’s fine if it’s your thing. I’m not going to judge, But arriving somewhere knowing the hardest thing we had to do was to find the accomodation and a decent pub was not something I’d be prepared to give up. That’s before we consider how much more gear you’d have to transport.

There are so many good B and Bs on the route, unless you love camping or object to the £30-£35 a night for four stops, then I’m really struggling with why you’d camp.

Best number of days?
4.5 felt fine, 4 is doable but it’d have me chasing the clock and I didn’t want to do that. Sure you could travel lighter and ride harder but the approach we took worked well for our ‘leisurely breakfast, ride, proper lunch, ride, arrive mid to late afternoon, pub’ vibe.

I wouldn’t want to take any longer if only to save my liver. But a week of touring felt about right.

Did I take the right amount of gear?
Mostly. I could have taken less ‘casual’ clothes but I was never prepared to wash ride shorts mid trip. Plus we had a mid tour re-supply so I’m not really in a position to comment. I’d like a lightweight waterproof that was, well, waterproof but otherwise not sure I’d change much. Ad’s ‘Chammy Cream in a clear plastic bag’ is NOT a recommendation I can even begin to endorse tho!

Lycra or baggies?
Lycra. There, now I’ve said it. Bottom half certainly. I stuck with baggy MTB tops and stayed away from places of high population 😉

Was the bike packing kit worth it?
For me it was. The Alpkit stuff is quality kit and made by a great UK company. My seat pack was super stable as compared to Ad’s ‘Wobbly Dalek’. But his was a lot cheaper and fully waterproof. The three bags on my bike worked well and I wouldn’t change anything for future trips.

Garmin or Phone?
Ad’s Garmin had great turn by turn routing and excellent battery life. My free GPX app was easy to read and saved me carrying another device. I needed to run an external battery pack to make it last the day though, and it was useless once the rain came.

We didn’t bother with paper maps and didn’t miss them.

Would I do it again?
Probably not. Mainly because I don’t think I’d enjoy it so much the second time. It’s not like riding a favourite trail, it’s more of an experience ticked off. Not bothered about doing it North to South either.

Did I learn anything?
A bit. I can ride a drop bar bike for five days. I can ride 100km lumpy routes on multiple days. I am a bit stronger on the climbs than I expected. Mostly though I found the whole concept of touring by bicycle is something I want to do lots more of. And not just when I’ve got too old to ride MTBs. Apart from 45 mins on the last day, I loved every minute of. It.

Ads was a good riding companion. Especially to put up with my crap jokes and weapons grade snoring. I wouldn’t want to do this kind of thing on my own. But as an experience with a mate, it’s one of the best weeks I’ve had on a bike, And I’ve had A LOT of amazing weeks riding over the last 20 years.

Final thoughts?
Just one. If you’re wondering if you can or should do this route, then stop wondering and get it booked. You don’t need to be super fit or have an amazing bike or even understand how to read a map. You just need a sense of adventure, a good mate or two and the desire to go an experience something different.

Really just do it.

And if you’re short of someone to ride with, give me a call I might change my mind about doing it again 🙂 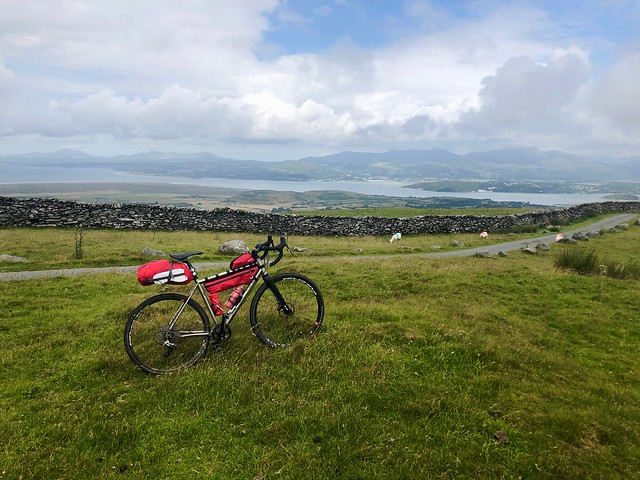