Pub talk is cheap. Here’s how it goes: ‘Day 2, total bastard, day 3, yeah we probably underestimated that, but tomorrow has less climbing that yesterday and less distance than Tuesday. We’ll smash it‘. While my brain was subdued by alcohol, my legs were clambering for attention. In the anatomy edition of Monopoly, they had definitely not passed go nor collected £200 of freshly rested muscle.

What nearly broke me on Day 4 wasn’t the maximum elevation, which we’d already pegged as being only a little more than half of what we’d done so far, it was the sustained climbing of multiple lower summits. Before all that though we were going to the seaside.

Barmouth is pretty much the Wikipedia citation for ‘God’s waiting room‘. But I can’t love it any less for that. It was one of the original tourist towns. With ‘holiday specials‘ transporting factory staff from grimy industrial works to clear skies and clean air. Bodies pressed to tiny steam train windows catching first sight of something never seen before. The Irish Sea must have looked like Mars. And while we’re back into faded glory, what a thing that is. 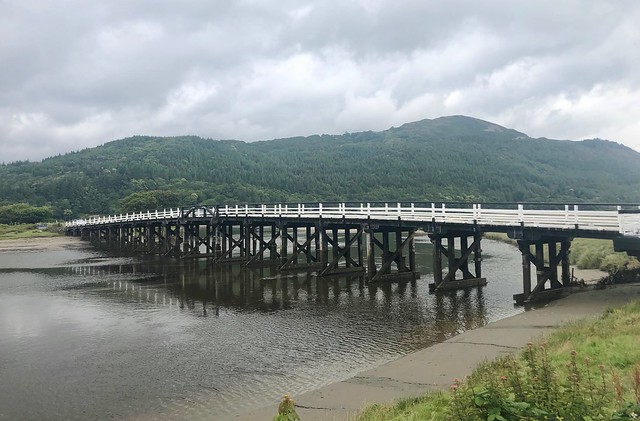 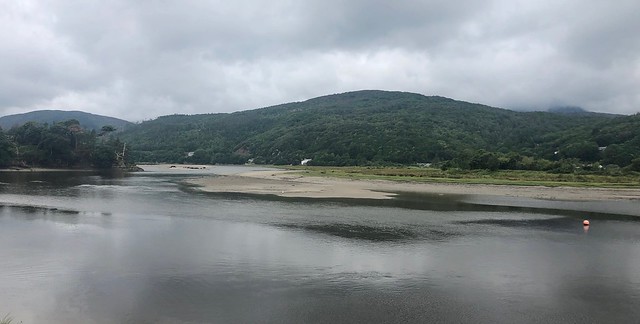 We’re 10km away from sticking our toes in the sand.  I’m weary and so is Ads. He’s ten years younger than me so clearly I’m suffering more. Therefore it seems fair he takes point on the fantastic path out of Caernarfon hugging the river before arcing towards the sea.

The track is wide but the wind is brutal. It’s blowing spitefully in our face so we’re nose to tail pushing hard and missing out on a vista that’s more New Zealand than North Wales. It feels properly wild even in sight of towns on the headland. We’re in and out of coves, sylph like bridges appearing close are snatched away as we hove to port or starboard. 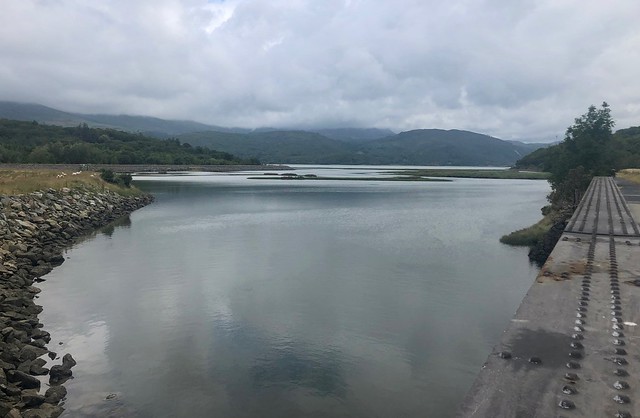 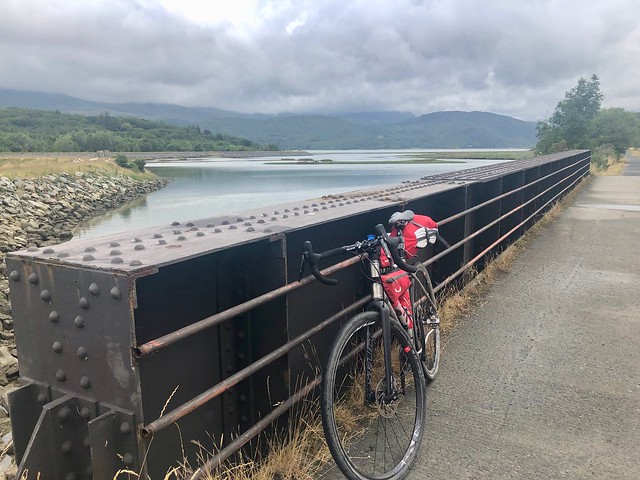 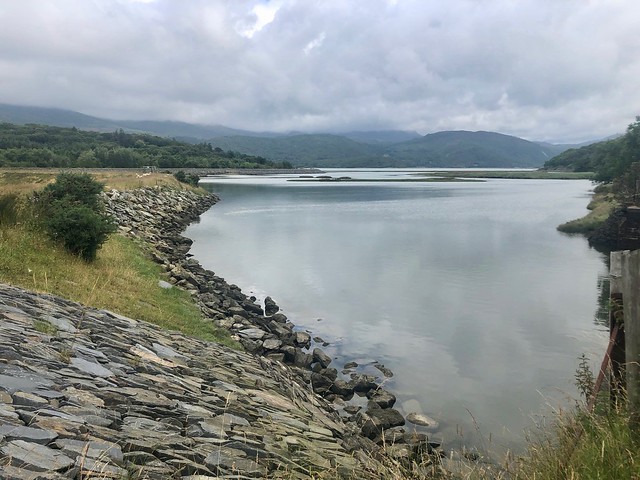 We’re giving it plenty even on day four legs and I misjudge my turn on the front and wrap my seat bag strap on Adam’s brake lever. That was two seconds of excitement I’ll remember for a while.  Calming down a bit we merged onto the old railway running parallel with todays single line bridged over the water. It’s fun to ride until the raised sleepers get a bit tiring but the views across the bay are worth the discomfort. 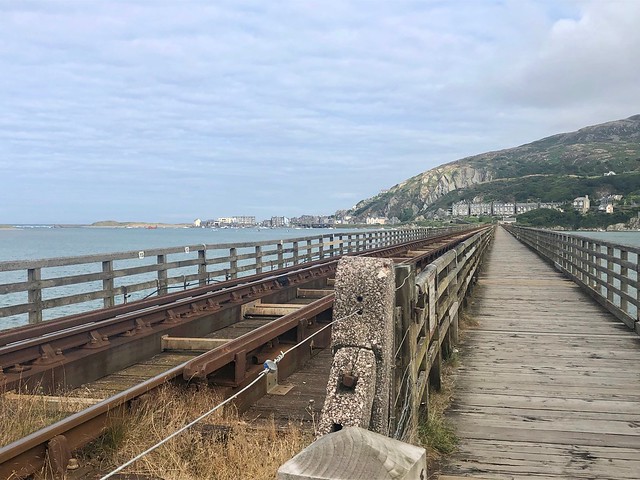 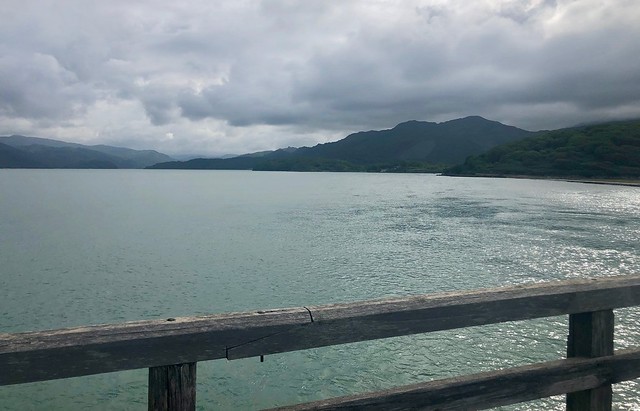 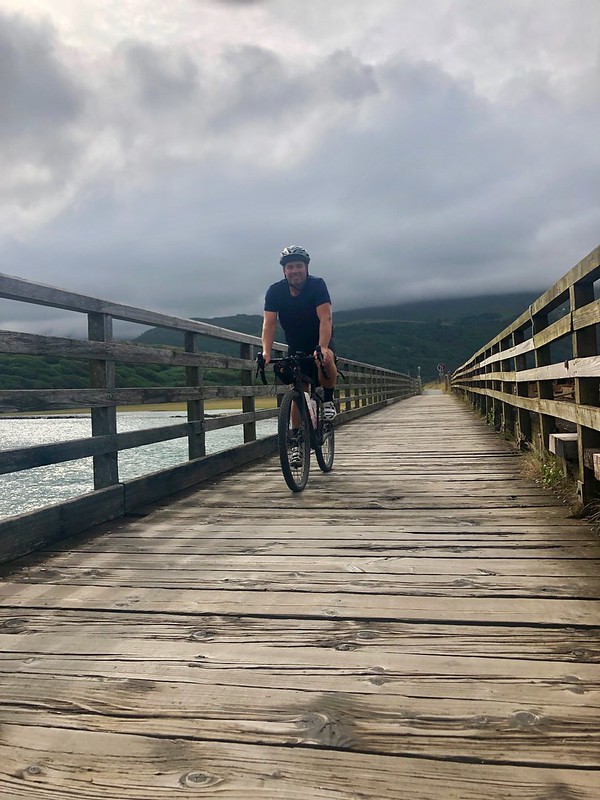 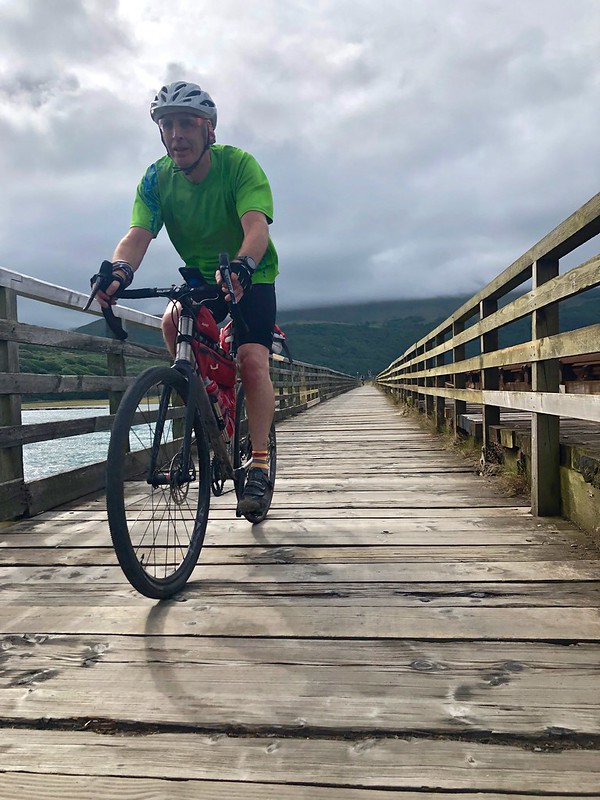 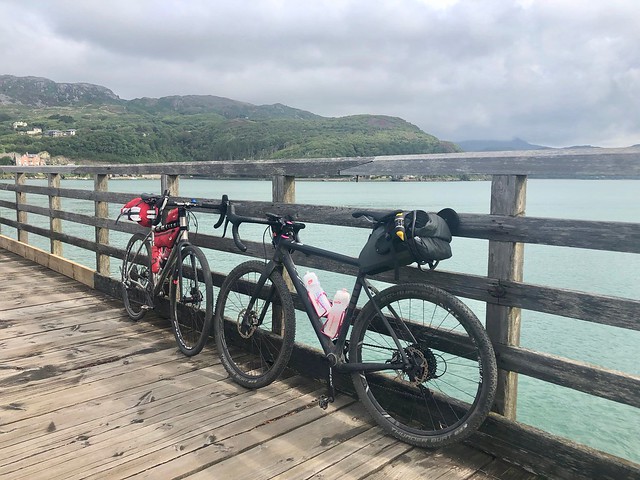 The town itself is a bit of a disappointment. The weather isn’t helping. The beach is storm tossed and the ice cream booths hard shuttered against the wind. We peer into a hotel, last updated in the 70s, and see an elderly couple sipping tea because there is nothing else to do. Because I’m old I start humming Phil Collins’s ‘Home by the Sea‘. I feel this cultural reference is lost on Adam. 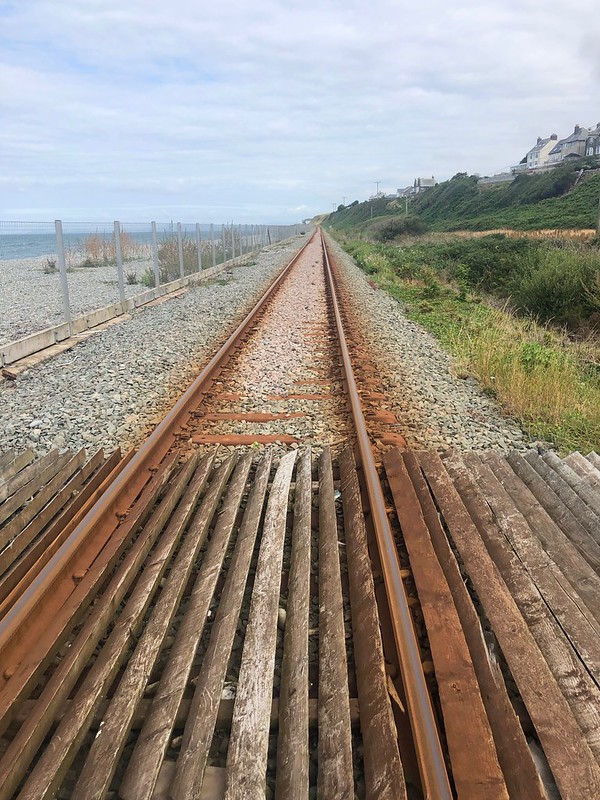 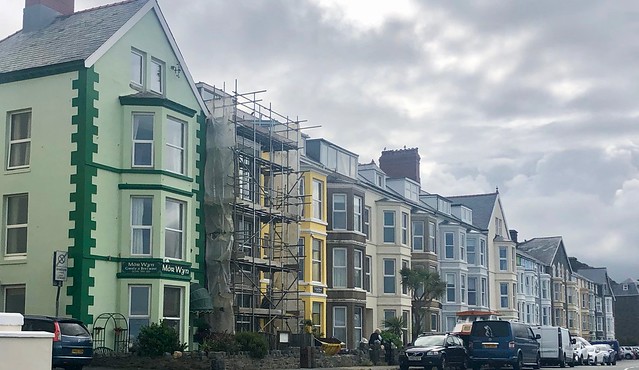 We climb out on a steep pitch reminding us our legs are not really up for what’s coming. Not just legs, but – for me at least – other vital skeletal accessories primarily shoulders. Not ridden a dropped bar bike much, and certainly not for four consecutive days so there’s some unpleasant crunching replacing smooth rotation. Other body parts are also clambering for attention but I’m ignoring those on the grounds there’s nothing I can do to improve their lot.

Can’t do much about the road out of Barmouth either. It’s as close to a main drag we have to do all week and it goes on far too long. We eventually hook right where – after careful consideration of the guide book – we manage to  miss the easier route to instead climb for about ever to the summit of Moel Goedog. This does give us some fantastic views of the Llyn Peninsula and across to Cardigan Bay. 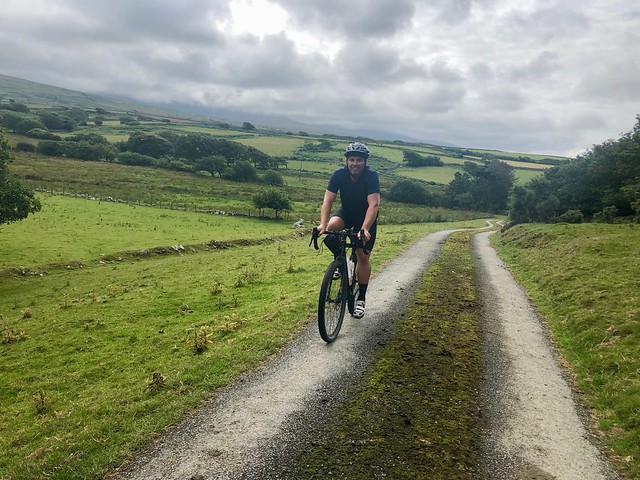 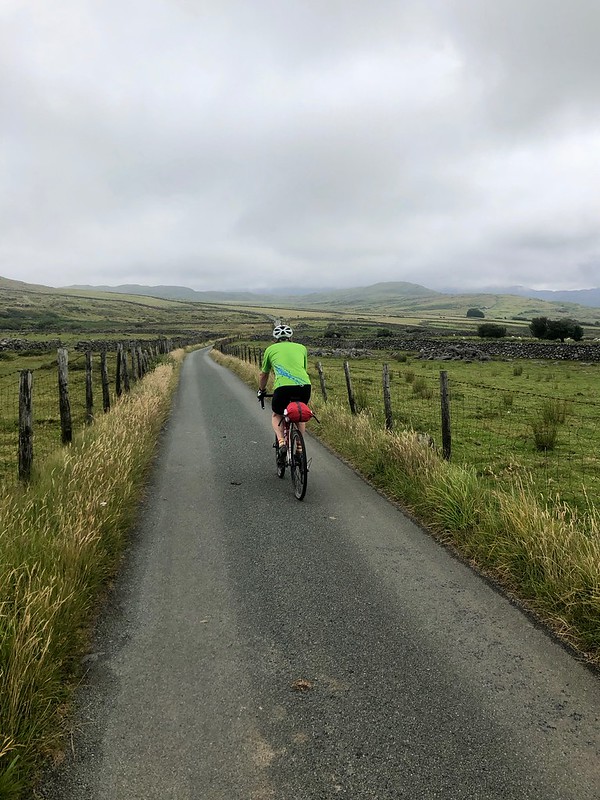 It also gives us the opportunity to descend briefly on some slick moss covered roads with all the grip of polished glass. The climb is almost a relief until it isn’t with its false summits, 360 degree headwind and hard earned metres. Every little climb feels way more difficult that it was even a day ago. The metres click agonisingly slowly off the total and suddenly this feels as hard as everyone told me it would be.

Even at the summit I’m feeling a little disgruntled. A bit ‘seen it all before‘, a bit more ‘how much more of this is there?‘ and then we REALLY crest the summit opening up the view of Porthmadog and the Snowdonia crescent. It is beyond awesome. I’ve ridden up Cadair Idris and Snowdon. I’ve climbed big hills in this part of Wales and looked down into the valleys but I’ve never seen it like this. If it was CGI, you’d dismiss it as too damn perfect. 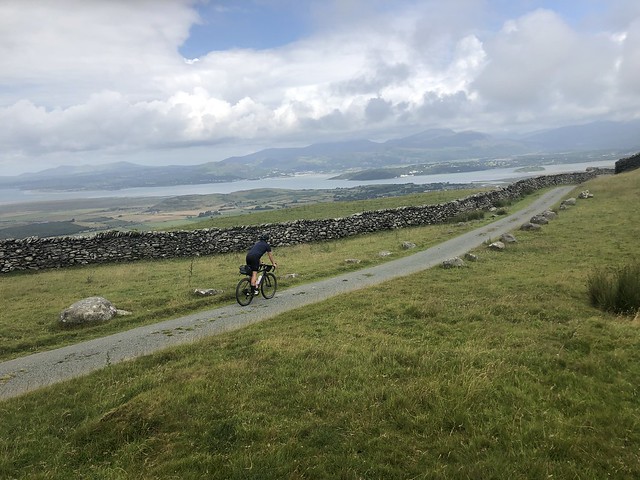 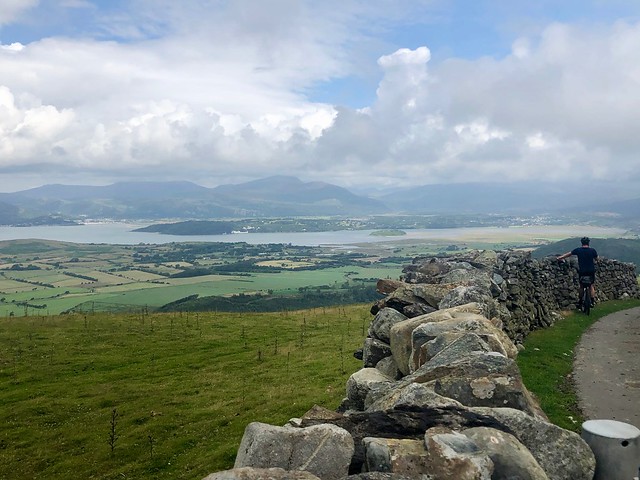 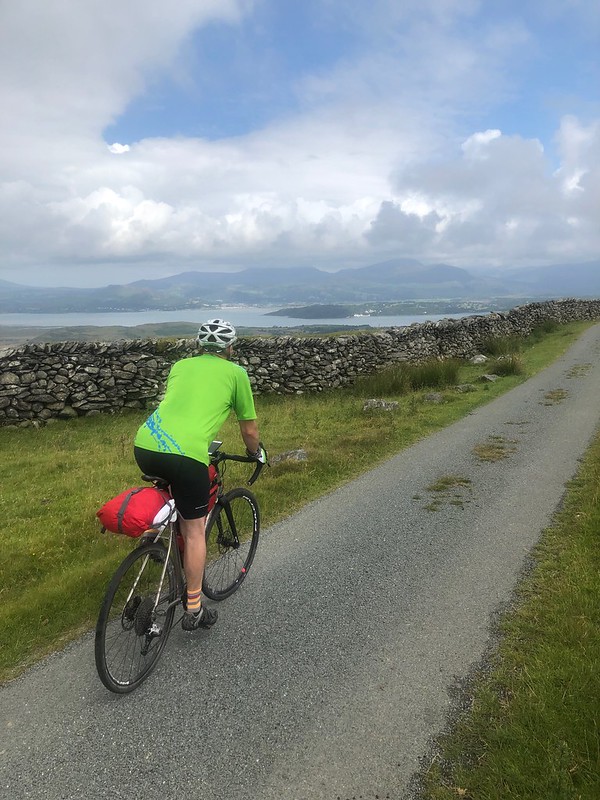 The pictures are fine but they don’t capture what you feel. That is better saved on the organic image store in your mind. We mucked about a bit trying to turns shapes into sense, but 2D is not the right medium. If you ever think abut riding this route, then this is the one reason you must. There aren’t many bikes up here and it feels like a privilege. 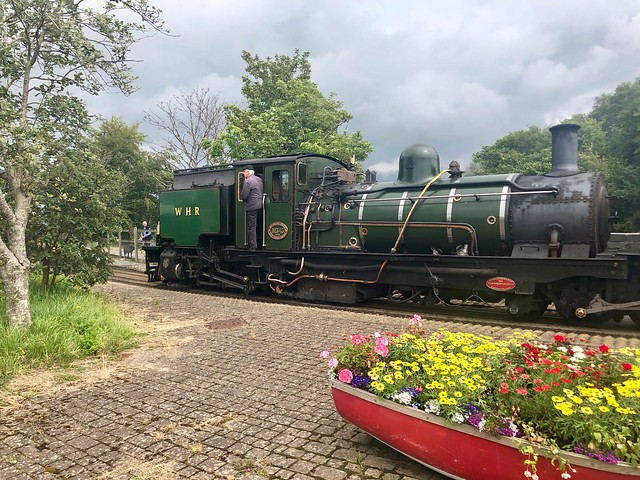 Photos done, we head down to Porthmadog, get a shot of the steam train before diving into a café on the main street serving ice creams to damp tourists at 16 degrees centigrade. Only in Wales 😉  We don’t tarry as it’s really not warm and we’ve a long way to go. Even after dealing with the biggest climb of the day we’ve still a few lumpy hills to clear, and the weather is not doing us any favours. 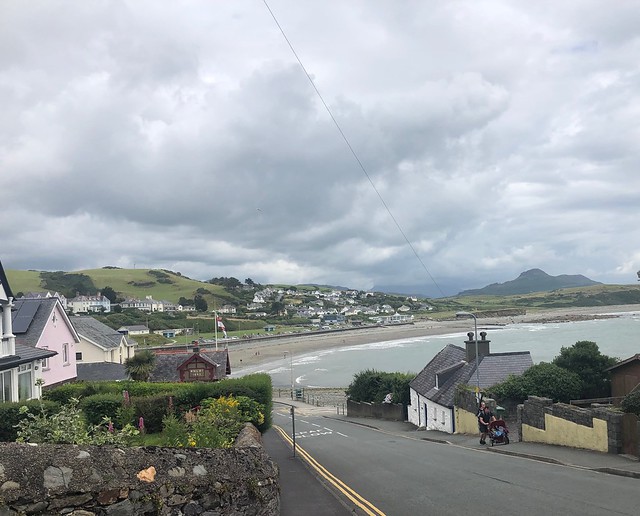 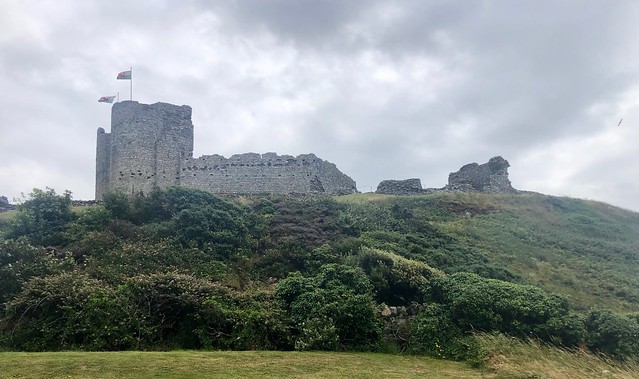 This confluence of these mildly unpleasant conditions hosted a debate on whether we should ride the optional loop out to Criccieth. Eight miles of down then up which felt like making up the numbers. We both knew though, if swerved, this would be something living long in regret. It wasn’t really a decision as individually we’d decided it was going to get done. Definitely the right choice, even after the long climb out, as we were rewarded with blue skies breaking out over the sea.

That’s where we’re going I thought. And we did on another disused railway. An easy gradient first climbing and then descending with barely any appreciable variation in speed. With a tailwind at last, sustained 30+ kph felt ridiculously easy. It was good to see the odometer roll over 90km with the shining sea calling us. It’d called us around the impressive exterior of Caernarfon castle and into the Anglesey Arms where we drank overpriced beer looking out to our final destination. 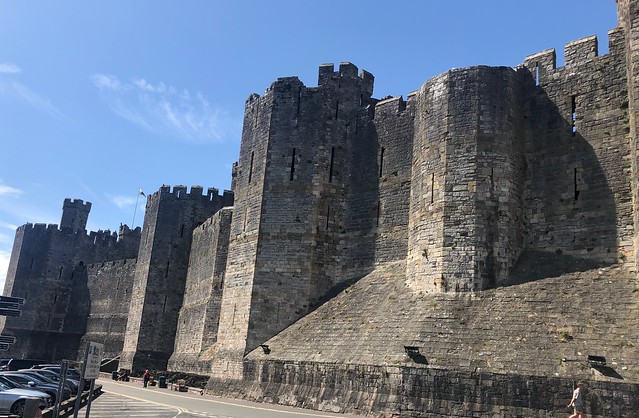 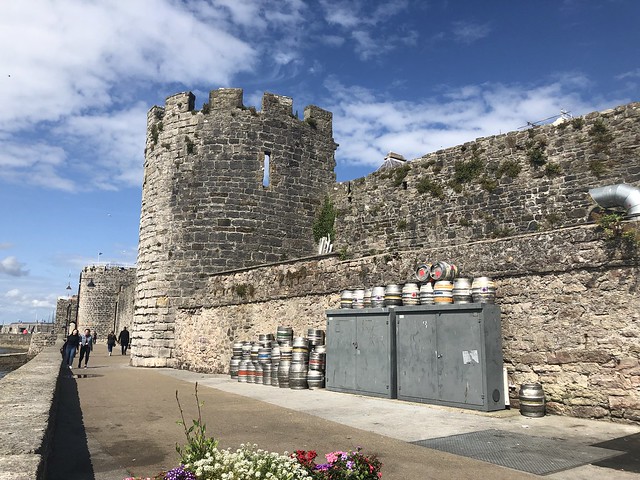 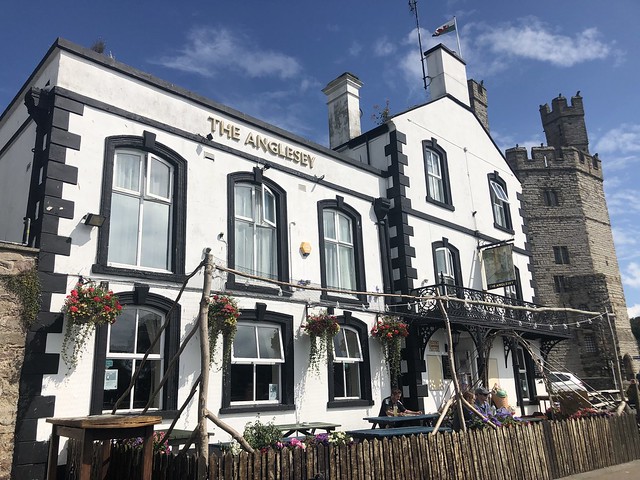 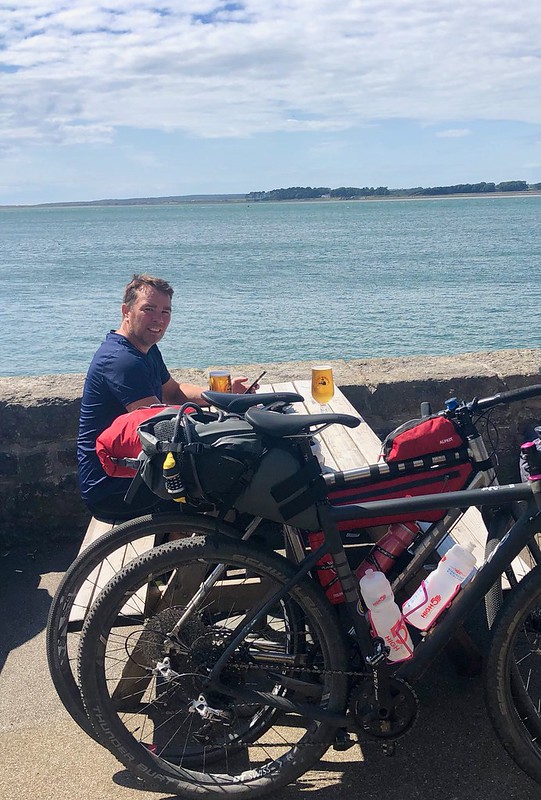 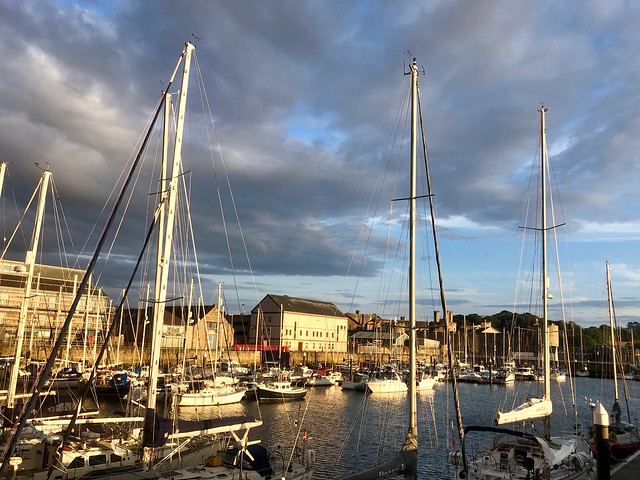 I toasted Adam ‘only 65km to go and bog all climbing, a day on easy street‘  How bloody hard can that be?

I think you probably know the answer.