A day of two summits and some miscalculation. This was always going to be a wild day through the Cambrian mountains. Adam and I know that terrain well from a biblical Trans-Cambrian back in 2017:  The twin summits of Foel Fadian and Myndd Y Waun blocked our way to the safety of Machynlleth. It was a hell of an effort to get there fighting the rain and sleet driven on by gale force winds.

So a happy memory then. Today we had some of that headwind and a lot less of the rain. The bits wondering whether a helicopter might be the Gentleman’s transport of choice bridged the two rides. We started on a climb apparently designed to remind your legs this was day 3, and no it wasn’t going to get any easier.

In fact it got a little harder as we headed into Hafren Forest. Familiar to mountain bikers – we spotted singletrack heading deep into the woods and considered an early coffee in the visitor centre. While the need for the bean was strong, it wasn’t worth trading hard gained height for. 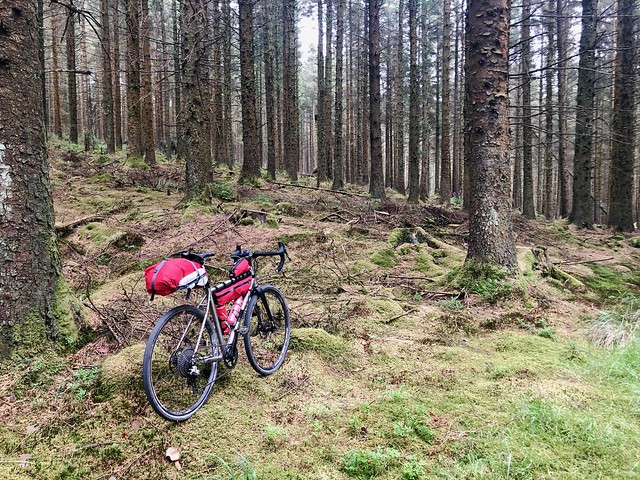 We’d lost the sun but not the humidity. So I was happy for a sit on a mossy bank off the road while Ads attempted to fix his squeaky cleats. This chain lube based procedure gave me sufficient time to munch on an energy bar, and consider if this was the right time to explain the noise was coming from his pack. Since he was clearly having so much fun trying to diagnose the problem, I thought probably not. 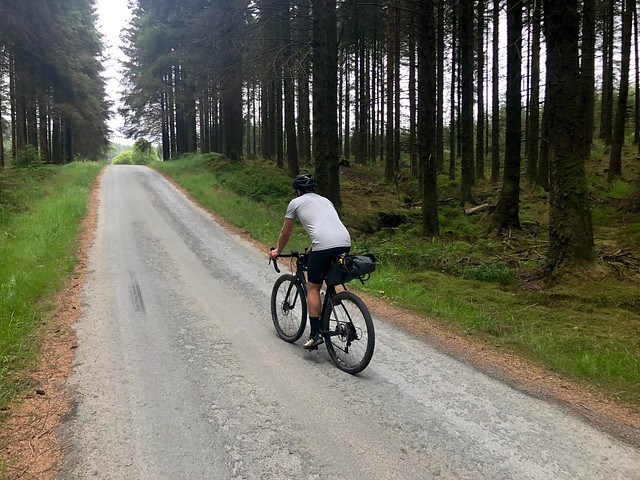 We remounted – squeak still in attendance – to grind up the summit sporting a viewing point. This is where the Ospreys were re-introduced a few years ago. We took some pictures of wild scenery entirely absent of said Ospreys 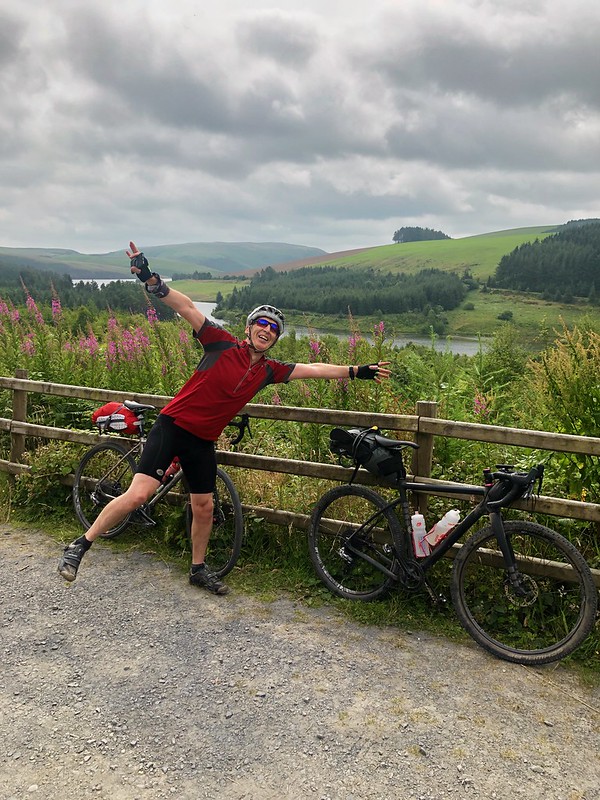 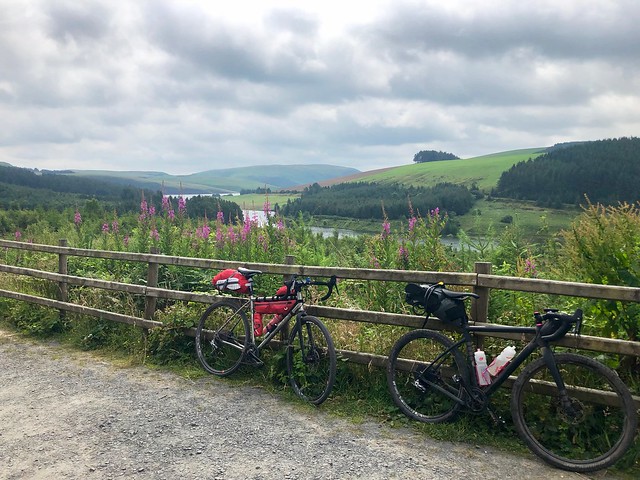 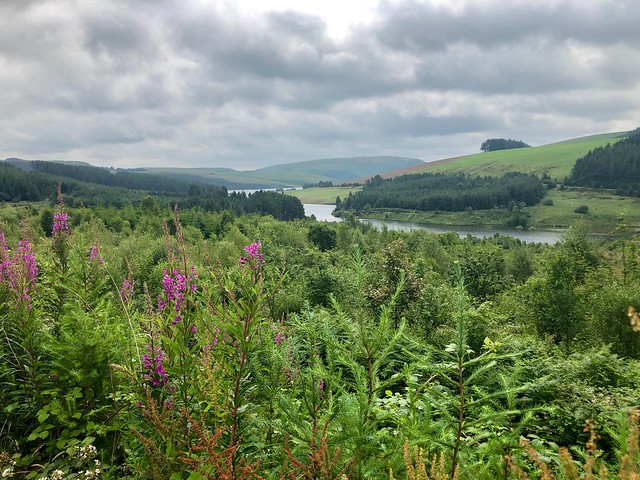 After some dithering it was apparent the climb to Foel Fadian wasn’t going to happen unless we actually got back on the bikes. The guidebook characterises it as a ‘gentle climb‘. I’m not a confrontational man, but I am taking issue with that. 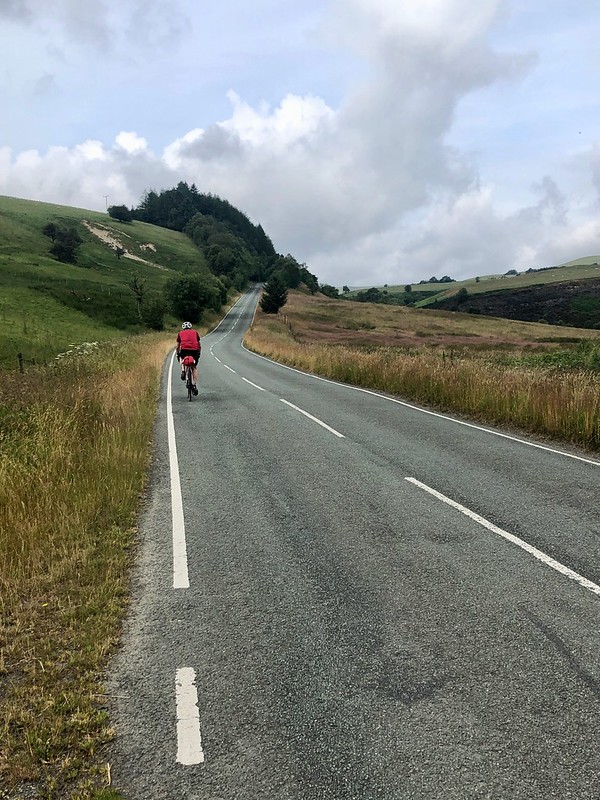 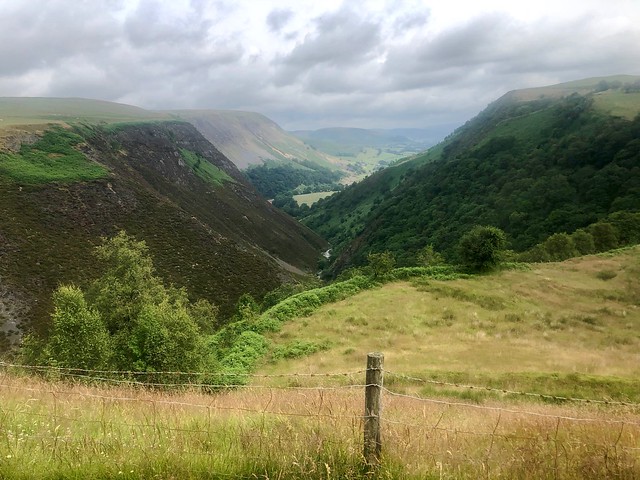 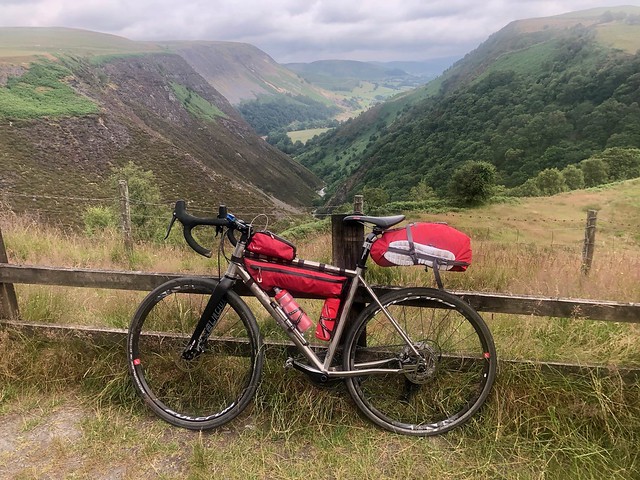 It might have been the headwind swirling in our faces. It might have been the fact I’ve driven that route many times (waved at The Star on the way past. Wondered about a pint. 10:14am. Thought best not), it might be the weather fronts rolling in promising rain now and maybe hail later. Whatever it was, it wasn’t bloody gentle. Especially the top section where I felt the urge to go ‘Full Strava’ leaving me dragging in litres of clean Welsh air while hanging over the bars. 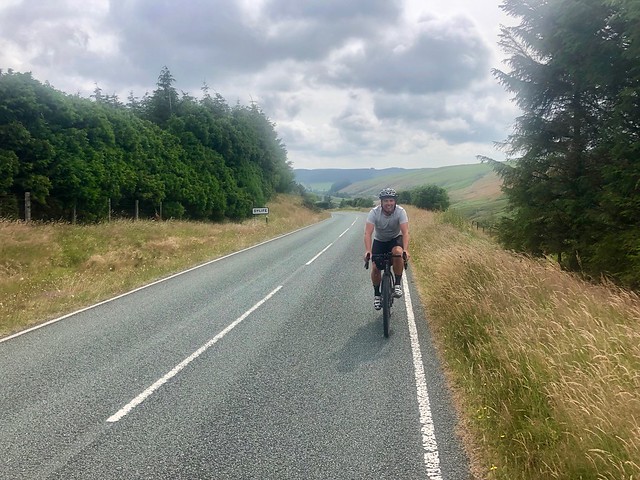 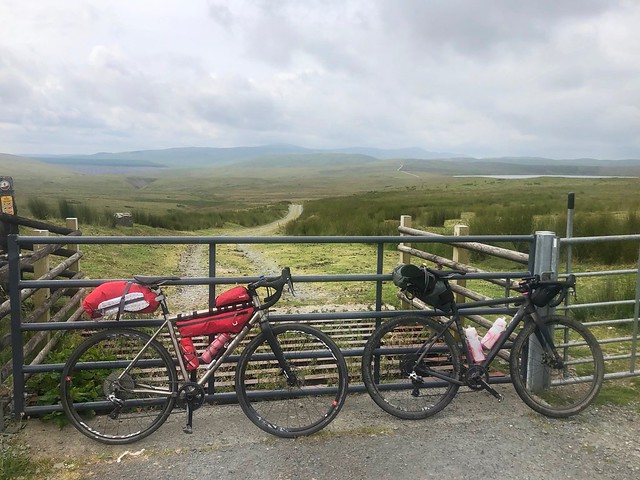 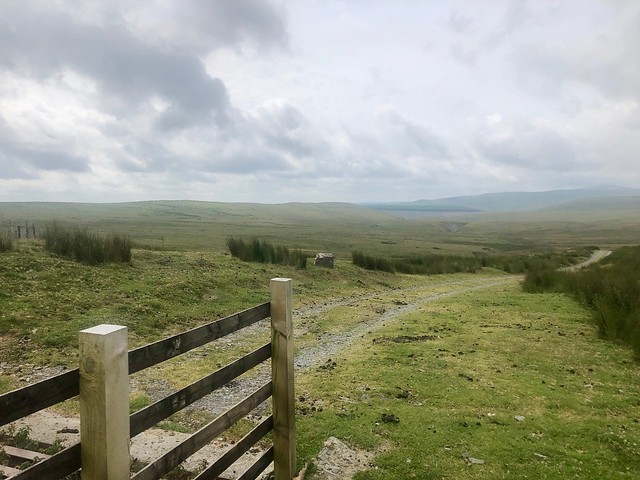 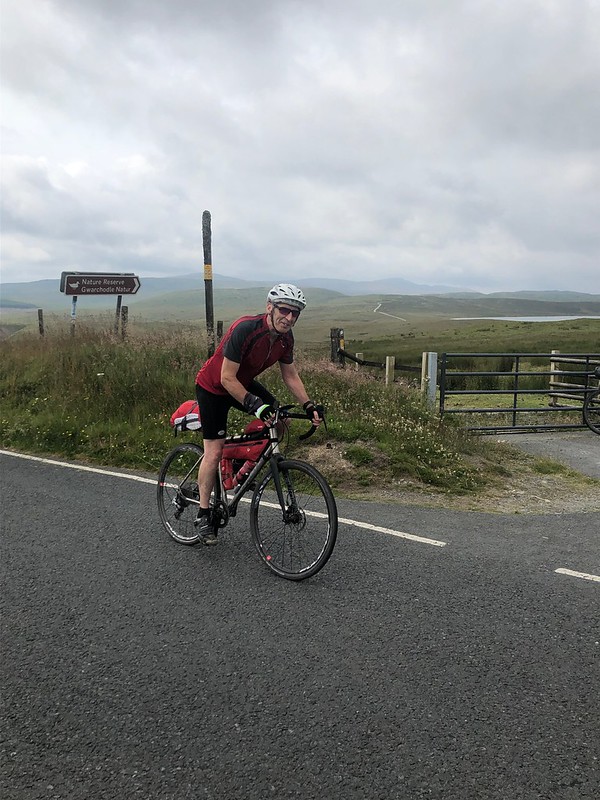 Finally it was done and we could see it was all downhill from here. From the highest point on our route (if you were tending to masochism you could really hurt yourself by adding many more summits. The route tends to skirt the western sides of mountains where it can. Thankfully) we had an 8 mile descent into Machynlleth. The top section of which is simply epic.  A wild juxtaposition of panoramic landscape and steep, dangerous corners. Hard to keep your eyes on both. 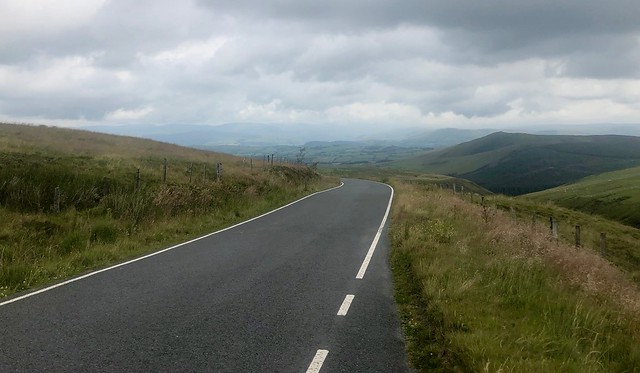 I’ve never been much of a road descender. Always looked down and wondered where the rest of the tyre might be. Followed by a concern that rim brakes and slick rubber can’t offer much in the retardation stakes. Now though up front I’ve most of a 2inch knobbly tyre arrested by a proper hydro brake. Same out the back although I’m not leaning on that much. 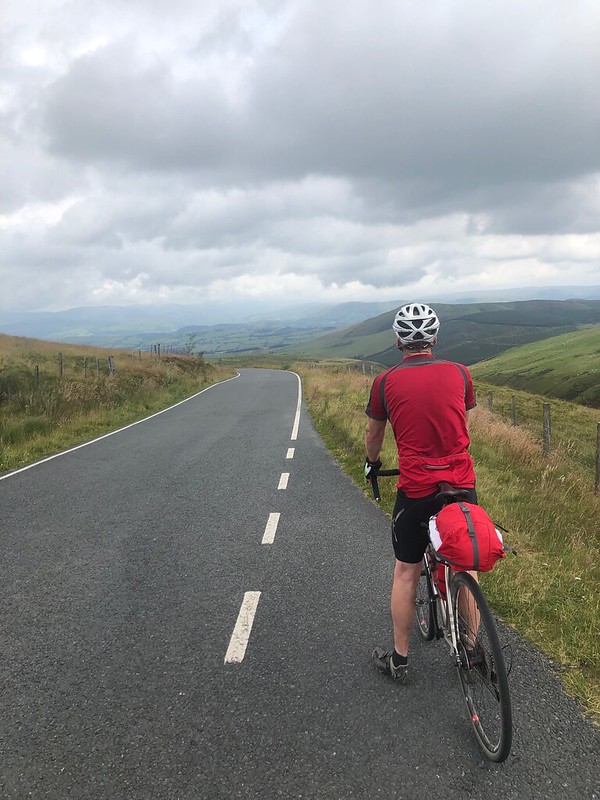 Taking a bead on Ads,  I give myself a stern talking to re: worrying about skewer tightness and chance of tyre explosion and instead swing the bike through a patchwork of glorious scenery grabbing my eyeballs when I should be grabbing the brakes. The bike is amazing – even heavily loaded – super stable and giggly fun pitching into the corners. We hit over 70kph which might not be much for a proper roadie, but for me it’s pretty much light speed. As the gradient backs off both Adam and I are gabbing away filled with adrenaline and a bit of relief.

We see pack-laden riders toiling up this climb and we wave and we smile. And inwardly we think ‘you idiots, why ride it this way?‘ In about two hours, we get a reasonable idea. 20 minutes later though we’re in Mach. Mach being Mach has a market cheerfully selling everything from old furniture to New Age tat and shit.  I love the place, it’s a refreshing change from so many Welsh town trading on fading industries. 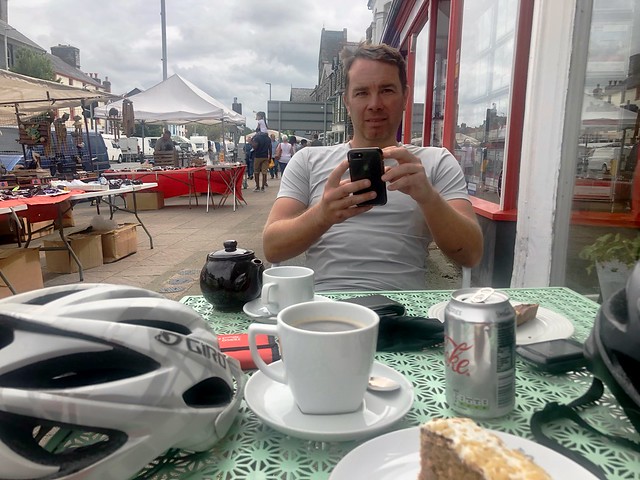 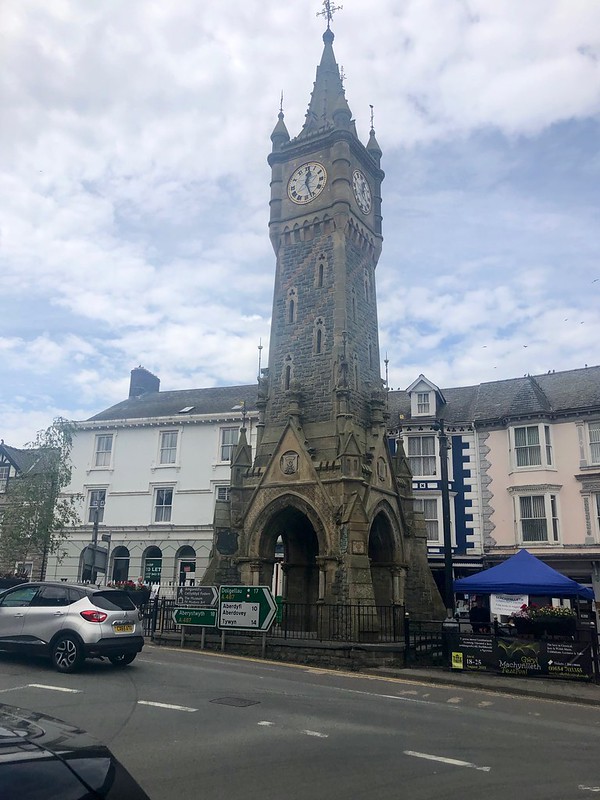 We have cake and coffee. And because we’ve loads of time, wander about a bit until the big tower clock strikes midday which is the trigger to eat  more food. We leave reluctantly – in my case very reluctantly as during our meandering I’ve lost my riding glasses –  and head over the Millennium bridge, built to save the squashy from the tin cans racing along the A487. 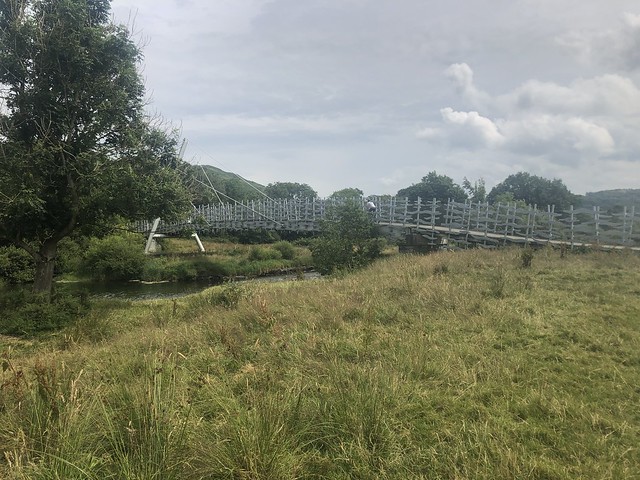 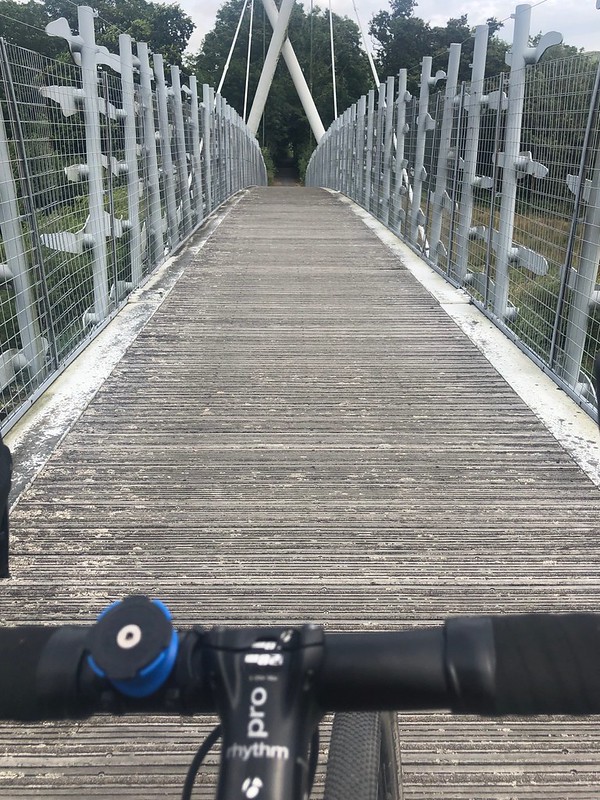 Which brings us to  the base of the afternoons climb. A quick scoot on the B4404 then over the bridge to start 9 miles of ascent.  There is no way to say that which doesn’t immediately chuck synonyms at your brain with ‘hard, tiring and what the fuck?‘ being the three I remember most.

The first part  though is mostly easy, as it’s adjacent to the old Corris slate railway, which brings us into that town where – unsurprisingly based on our trip so far – everything is closed. We press on to Aberllefenni built entirely of slate. Walls, roofs, garages, patios – a legacy of the mining here which defined much of the history of this Welsh landscape. 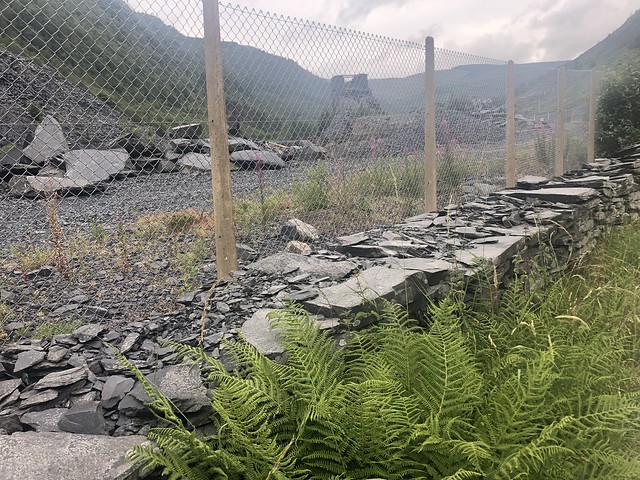 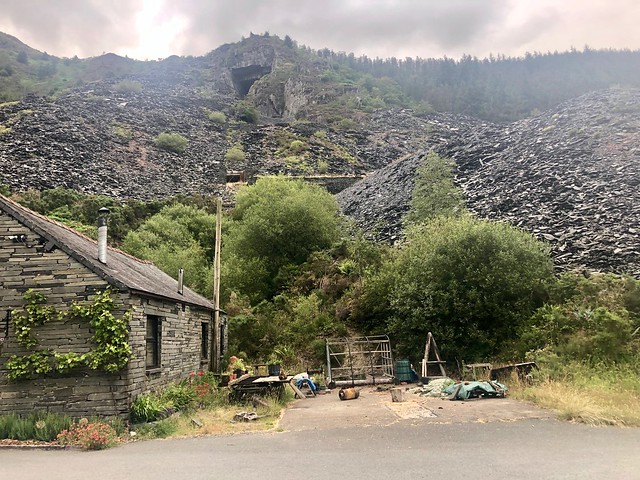 The old slate works are another sad cipher for heavy industry long gone. Quite sombre heading up the climb, where the gradient increases to the point where I’m wondering if my dismissive view of the front detailer as yesterdays technology is a metaphor for what we’ve just ridden through.

Whatever, it’s a tough climb going on a little too long. I’m trying to estimate the summit by charting the marching telegraph poles holding close to the road.

So tight is my focus I almost miss the five riders heading down- all big grins and hearty hellos. They are clearly the camping types with luggage clinging to every tube. A couple I notice have those old school rim brakes. I cannot help but think dark thoughts regarding their ability to stop at the bottom. Still on the upside they’ve 8 miles to climb up over Foel Fadian. That cheers me up a bit. 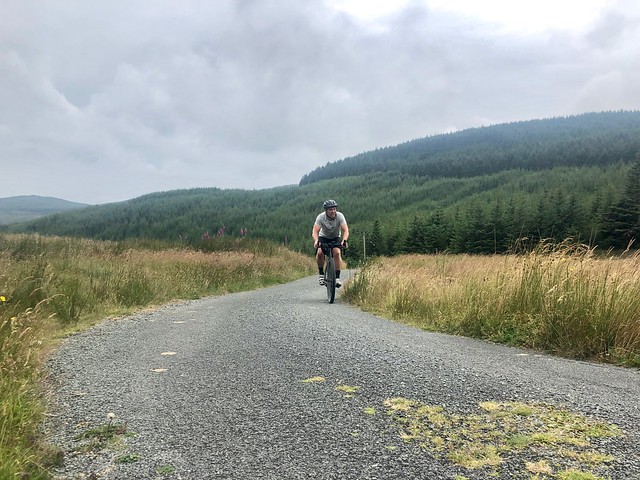 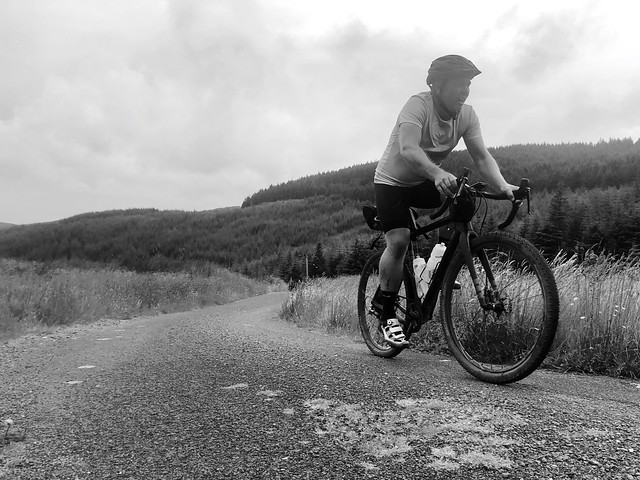 Topping out, I grab the phone and catch Adam with far less gears fighting his way over the top. We have a moment to catch our breath. Then ‘Well that was a total bastard. Beer do you think?‘ I do indeed and after a quick nod to Cadair Idris to our left, we make haste into the strengthening rain. It’s mostly downhill and we’re definitely relieved as today has been harder than expected. It’s not the miles it’s the elevation. I don’t feel the weight of the packs, but it definitely has an effect. 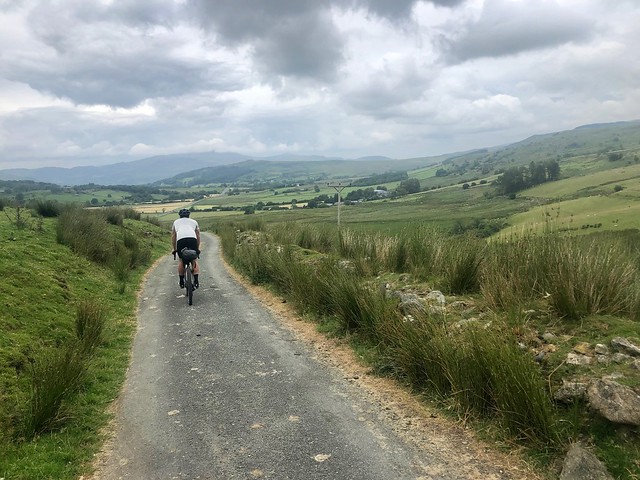 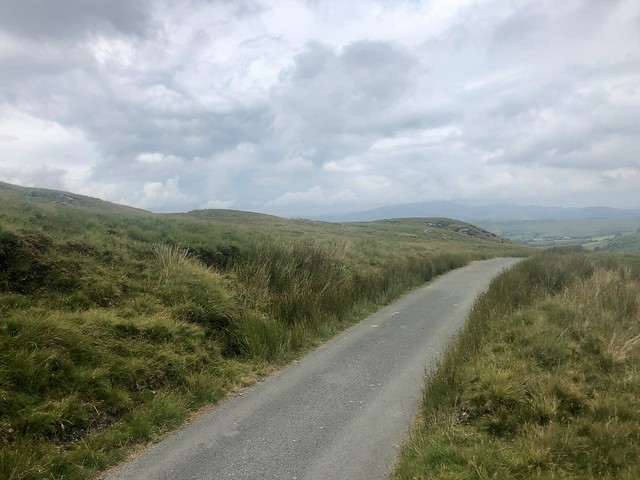 That effect me being desperate for sustenance as we roll into Dolgellau. A tip from my mate Dave (who runs Bike Corris MTB guiding company) has us diving into the legendary TH Roberts. An old Ironmonger turned awesome cake cafe, it has all the fittings of a Victorian shop and a selection of so many fantastic looking confectionary, it’s all I can do not to demand ‘one of each right now‘ and ‘another of the same to take away‘.

Today has been tough. Legs starting to really feel it. Sun has mostly been replaced by headwinds. The climbs are longer and harder. The landscape continues to be breath-taking, and the simple pleasure of getting up to turn pedals is a gift not to be underestimated.

Tomorrow we conclude will be easier. To that end I go full nosebag in a fantastic local restaurant adding Gin and Wine to my recovery drinks. It’s not like 100km and 1200m of climbing is going to be hard is it?

Will we never learn?