Before diving into day 2, permit me a sidebar to discuss mechanicals. Specifically Adams’ as I didn’t have any. Other than a strap on my ancient MTB shoes making a break for freedom before we’d officially started. Which doesn’t count. Ads had stuck rigidly to a servicing regime that could charitably termed ‘looks good from a distance, pass me a beer’. While his cassette didn’t actually quite fall apart or his rear brake completely fail, they were definitely both in the red zone.

His tyres however were something else. Barely vulcanised for a start. Do people really race these things? There’s more tread on my ancient Five-Ten’s which were mostly slick to start with. Even with about a pound of sealant slopping at each end, any air at the start of the day was long departed by the rides end. After three days of desperate pumping, they finally gave in and mostly sealed. Unless you touched them. Adam blamed my rubbish pump for his woes. I was keen to point out that I wouldn’t know not having had to use it.

Pre-trip this was the day worried me most. A bucket load of climbing spread unevenly over a bit north of 100km. The guidebook suggested this would take eleven hours. No way was my arse co-exisitng in the same space as a saddle for that length of time. Our plan – a somewhat ambitious term for gin based hand waving the night before – was to get it done in 6. Including a stop for lunch. Which on reflection was another planning oversight. We’ll be back to that.

First though we had to get to lunch. Climbing out of Brecon was all the fun a steep pitch the far side of a big breakfast can be. It’s odd as my bike only really felt heavy when I had to fetch it over a gate or suchlike. So riding it uphill wasn’t that much of a trial once accompanied by a smidgen of mental fortitude. Ads bike was lighter and, he had less kit which should have made it easier. However, in a moment of team spirit he’d handed over his spare 11-46 cassette to the old man whose need was clearly greater*.

Half way up that first hill I could feel the want. 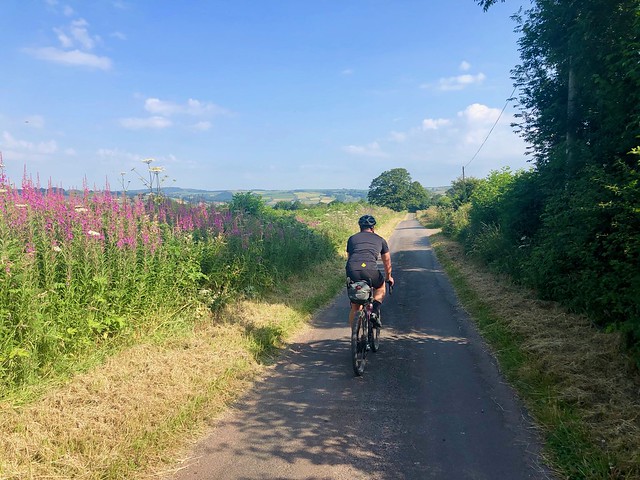 After getting that done, we switched back to grass-middled roads distanced from morning traffic. The NCN8 is an amazing route. Sure it meanders up and down valleys flatly breached by the main roads. This is the price of riding through stunning scenery with almost zero risk. Short of being mowed down by a tractor or terrorised by a bike hating dog, it’s a million miles from my normal horror of road riding. 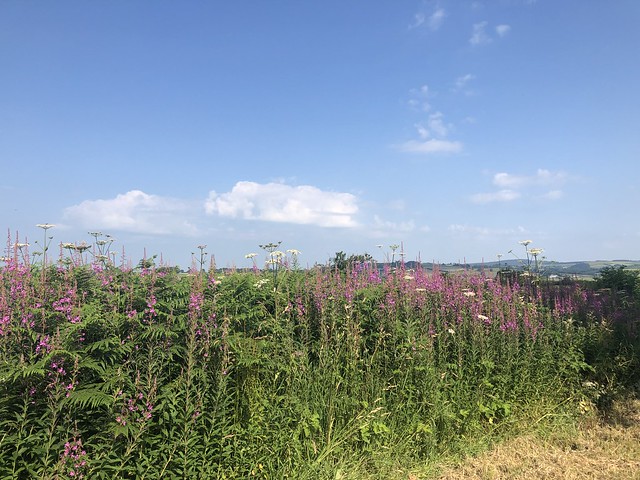 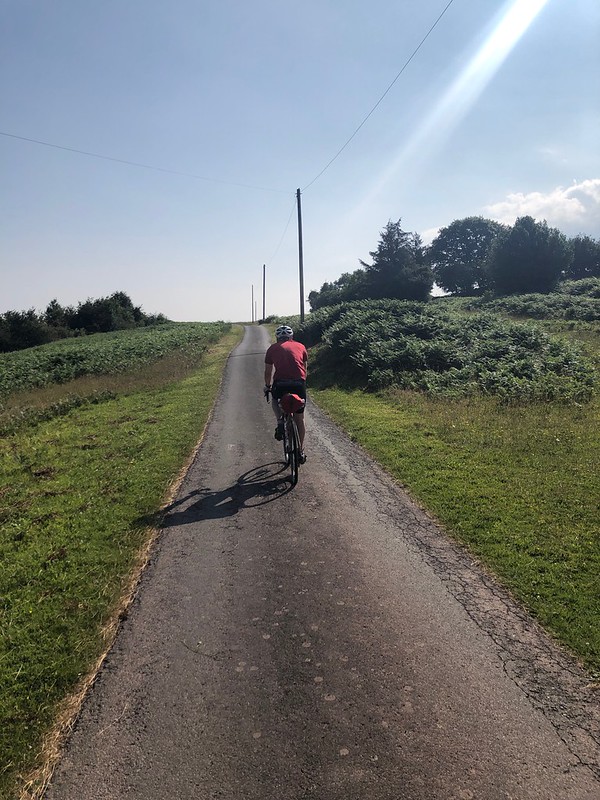 Sometime though there is no option but the main drag. After testing all my gears again on a couple of nasty pulls, we turned onto the main road heading to Builth Wells. A slight tailwind, a freshness in the legs and the aforementioned ‘destination anxiety‘ (heightened as the second half of the ride with the bulk of climbing), there was what passed as a 2 man chain-gang for men that cherish their ignorance of all things road riding

Well this one does, but I also love the speed even of these loaded bikes compared to the glacial thrumming of a 2.6 MTB tyre. We hit some short hills and they hit us right back, but we still made good time to Bulith. 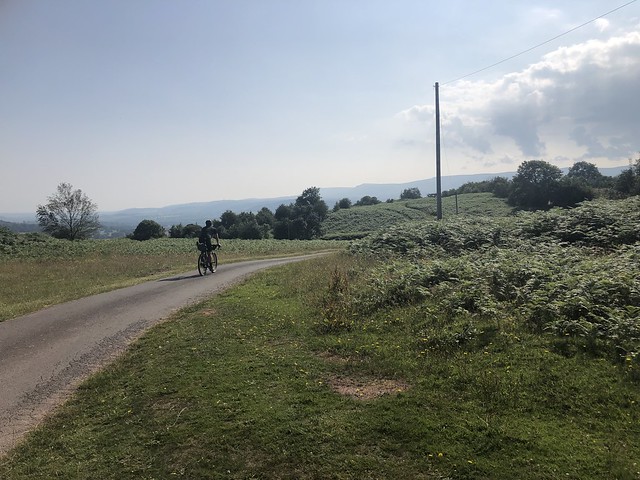 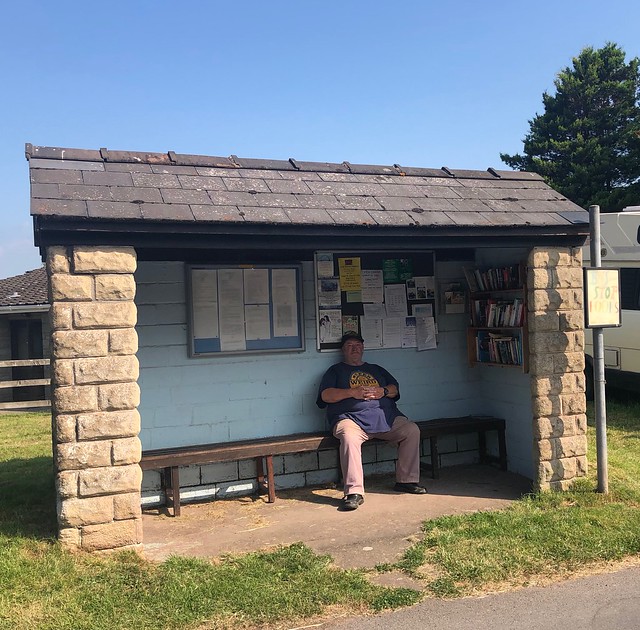 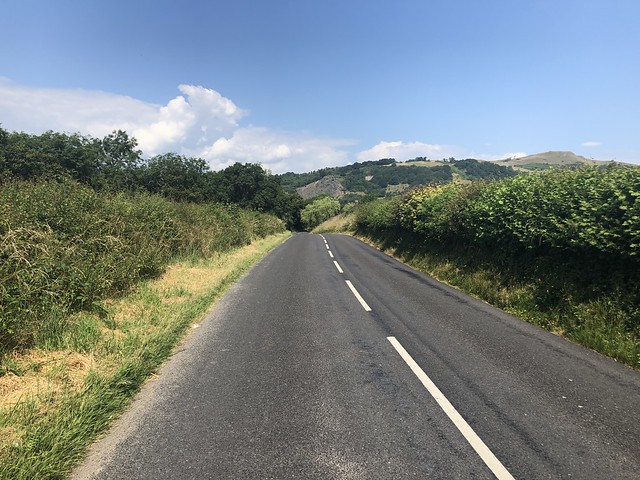 Bit early for lunch. Stop for a coffee? Not this pair, we were on a mission. Not sure where to due to continued navigational uncertainty, but the sun was out and the internal GPS was hard coded for an ‘early finish and cold beer‘. Switching direction to due north as we crossed the bridge, there was a lovely river ride out of the town. 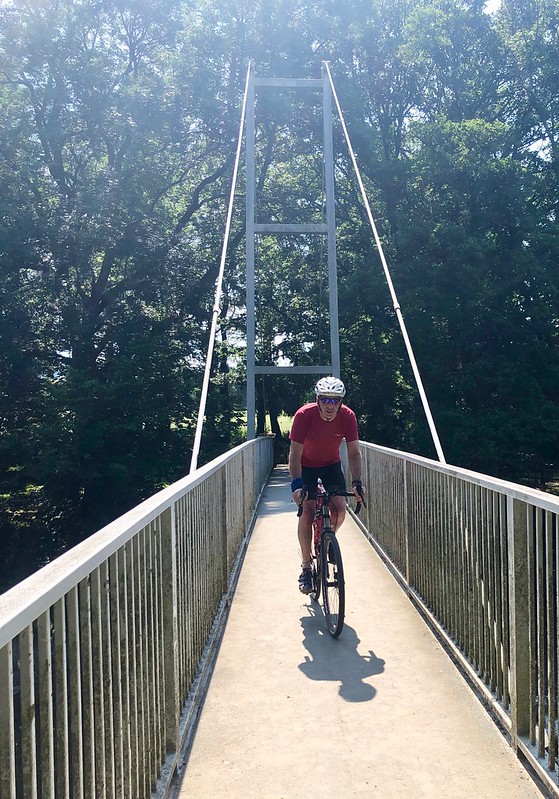 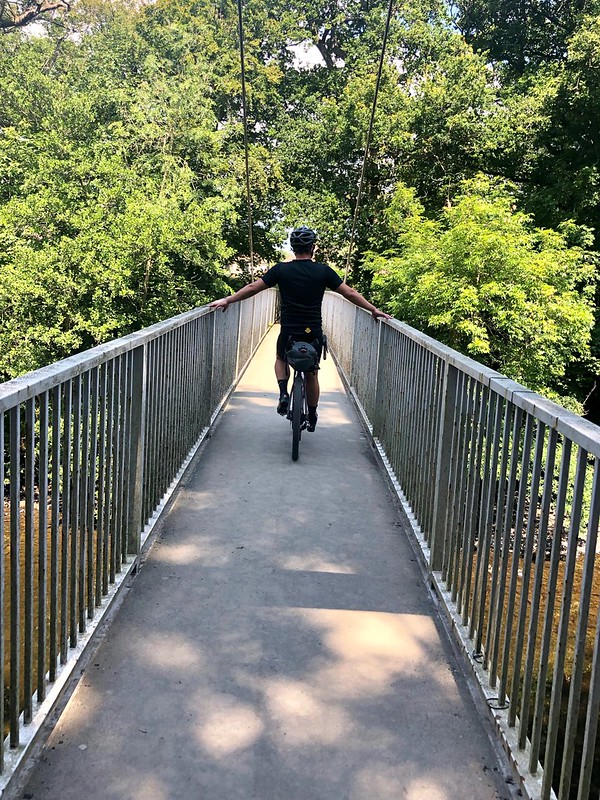 So much of this route is on old railway tracks (which is pretty sad when you think what they used to be here for) and river paths. We crossed the Wye and numerous other rivers so many times I eventually stopped taking pictures. 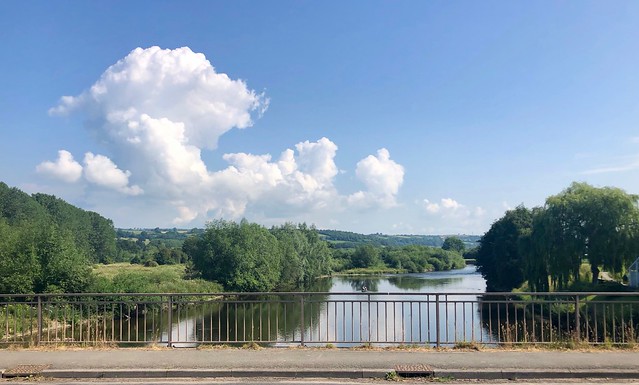 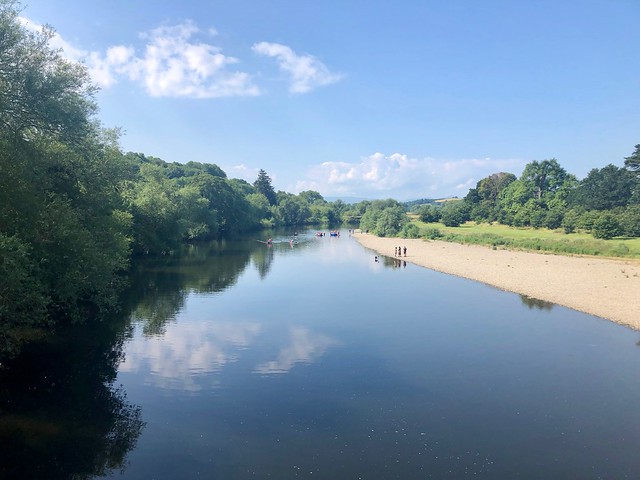 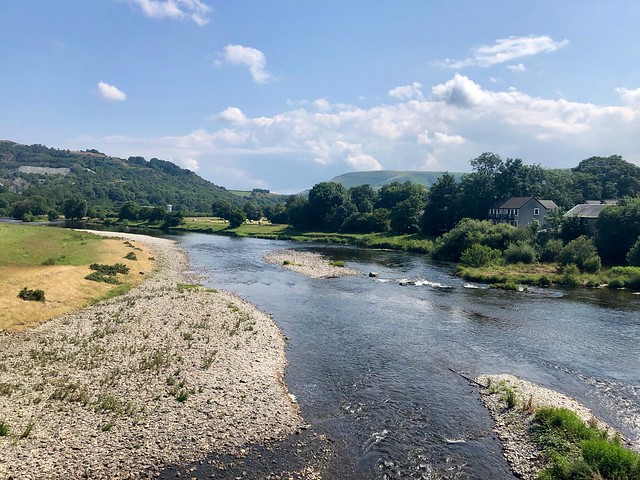 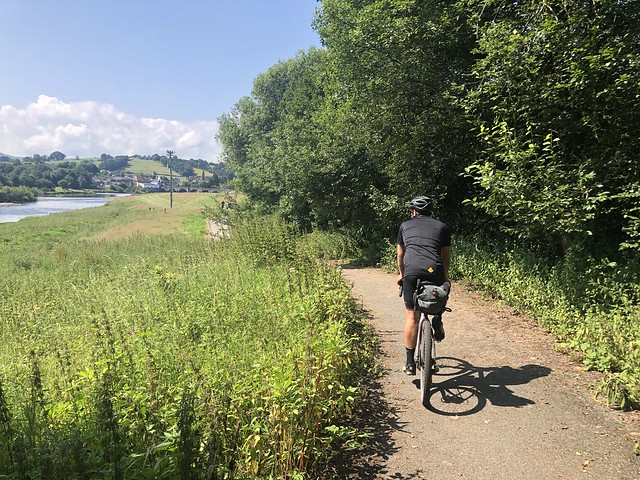 I’d also stopped eating. Not sure why, but it was timely when our vaguely planned stop at Newbridge-on-Wye hove into view as the munchies had taken hold.

You kind of expect any town ‘on-Wye’ to be a picturesque place full of tourist cafes, fresh coffee and a excellent selection of cakes. It’s not like that at all. It was more disappointment made real by brick. Three pubs, two closed, one mostly falling down but being painfully slowly restored by tired looking owners and surly teenagers.

Still the kitchen was open and after all the time it takes to hunt down a difficult to find tub of chicken, we were mostly sated, and keen to be on our way again. 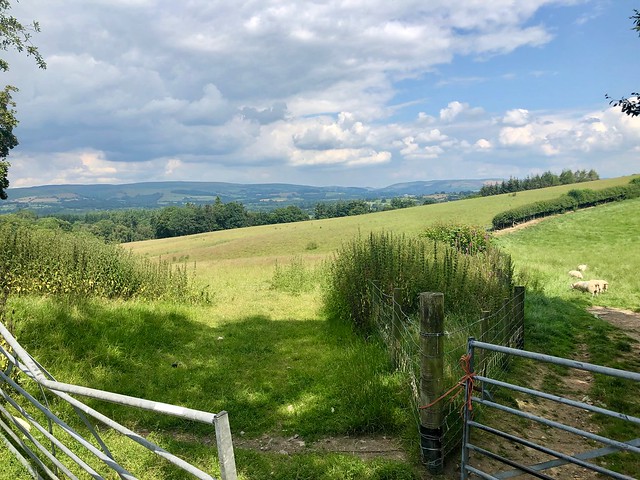 50km in which was good but still with 840m of climbing to do. Which wasn’t. Having all of the stats projected onto phones and GPS’s is great. Until it isn’t. Sometimes I’d rather not know, but we’d looked at the profile often enough to accept the next few hours were going to be a bit chewy. 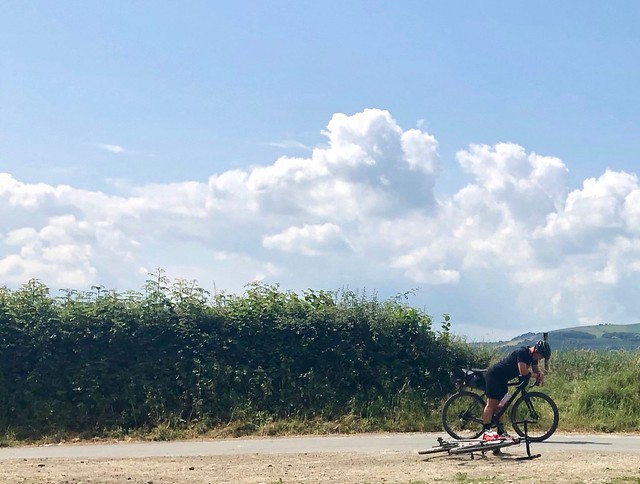 The road climbed steadily on much patched tarmac before merging into a gravel trail that – again – wouldn’t be much fun on a racer road bike. It was ace on ours including a short rocky downhill section I’d fancy a crack at with a MTB. 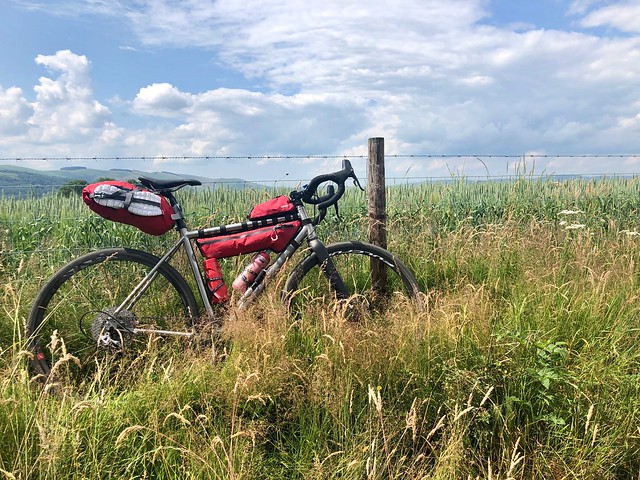 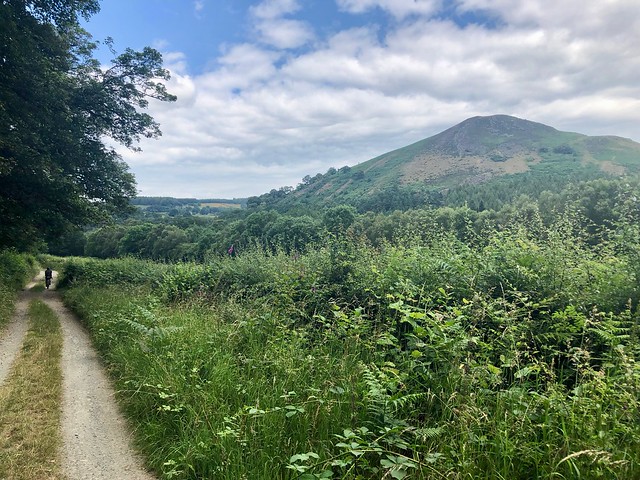 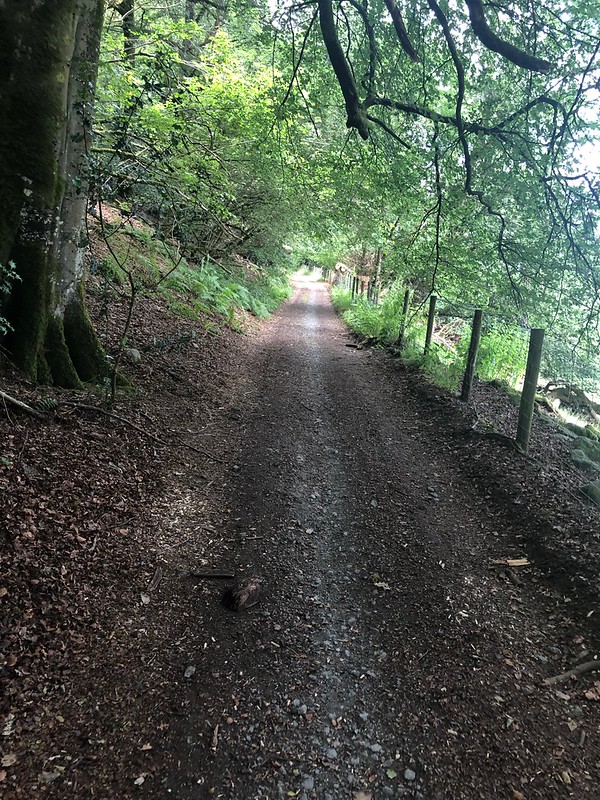 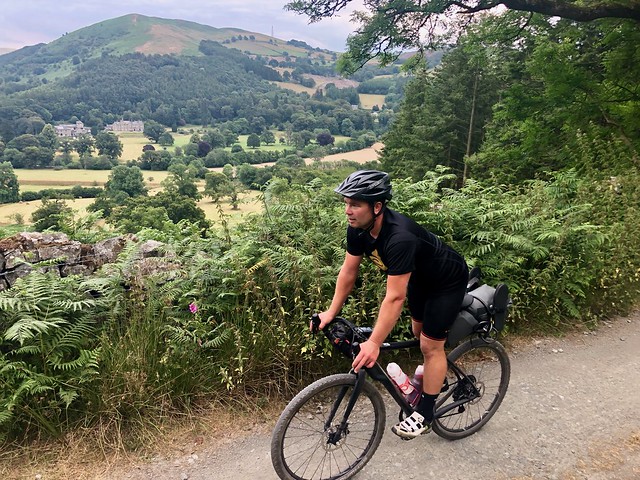 This is the old coach road and it wouldn’t be something I’d want to tackle in a coach. Or after rain. But today it was a welcome distraction to the almost endless climbing. It was certainly better than what followed – the might-be-a-road which skirted the slopes of Carn Gafallt. 20km of sheep shit basically. Not much of a view either. Unless your idea of a great vista is sheep shit and endless conifers. 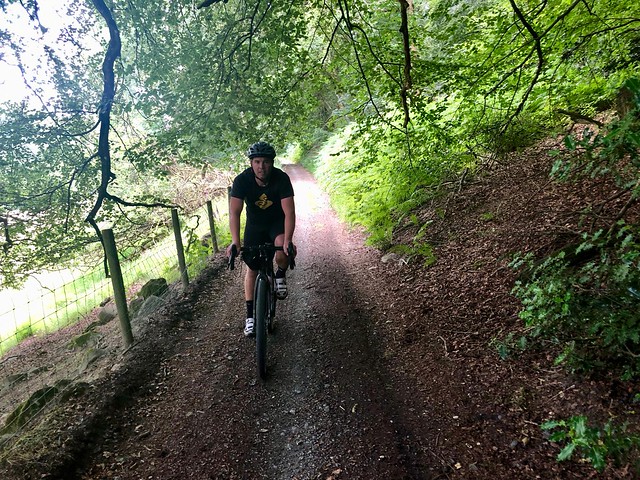 We got that done where the route sadly bypassed Rhayader. I have many happy memories of that town. Some of them rather drunken. Today tho we needed to crack on via the Aberystwyth mountain road. Well named and annoying in that down a bit, up a bit,  down a bit more, up IS THAT A CLIFF? Sort of way.  Cresting that pass at 350m, it was mostly downhill to Llanidloes. 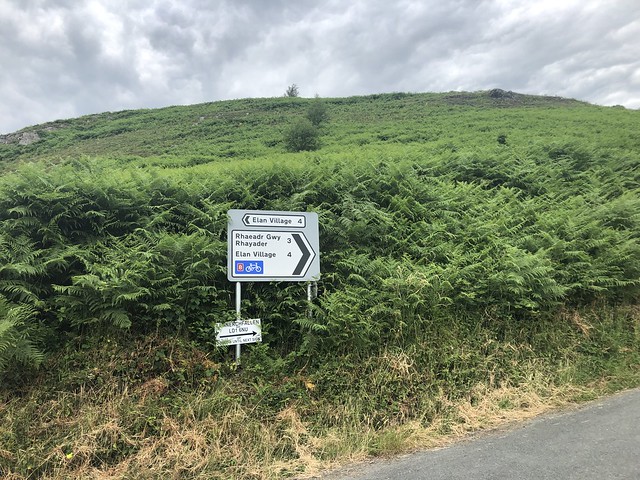 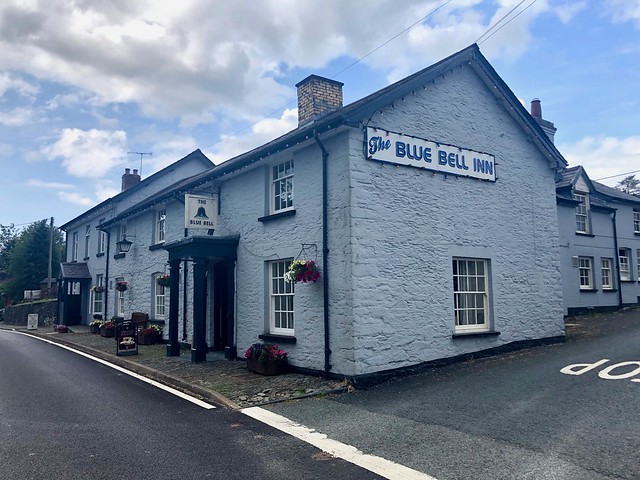 We finally rolled into Llanidloes at 1530. By 1531 we were in the nearest pub chatting to two old fellas heavily laden with sufficient camping kit to suggest they were on a ‘Shackleton Tribute Tour’.  They’d come the other way and spoke wearily of the climbs we’d be descending tomorrow. Again I was smug in our choice of route direction. It didn’t last. 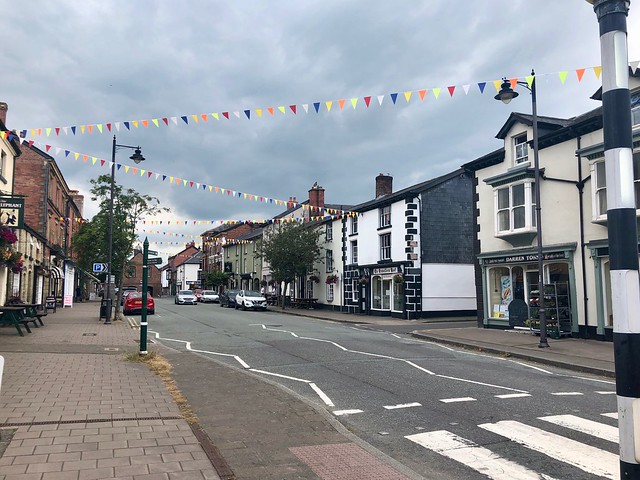 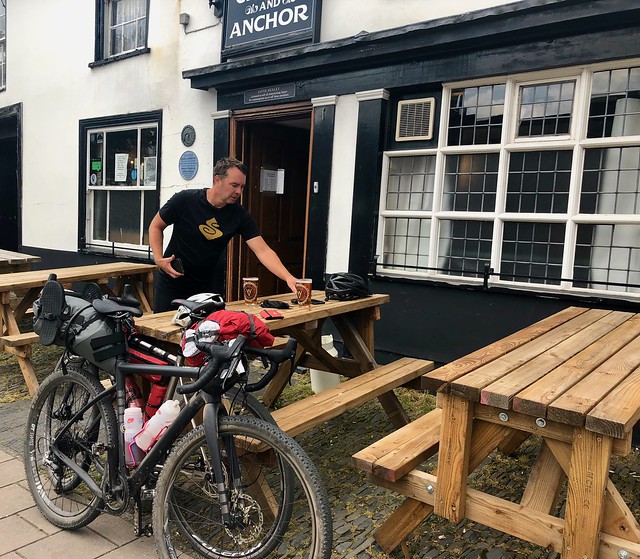 Carol (my long suffering wife) and daughter turned up from a day walking the Elan Valley dams. They brought with them a resupply bag into which Adam cheerfully abandoned about half his kit. For reasons still somewhat opaque, I added a few bulky items to mine.

Very happy to have smashed the ‘big day’,  we intended to celebrate with a slap up feed and possible an assault on a Welsh cheese board. Less happy to find the only food being served were pub crisps and not very good fish and chips. Still on the upside, tomorrow was an easier day.

Except, of course, it wasn’t.

*I loved that 11-46. The 46 especially. And as the week went on, I loved it even more. The fact it was Adam’s and he could have fitted to his bike made it just that little bit sweeter 🙂