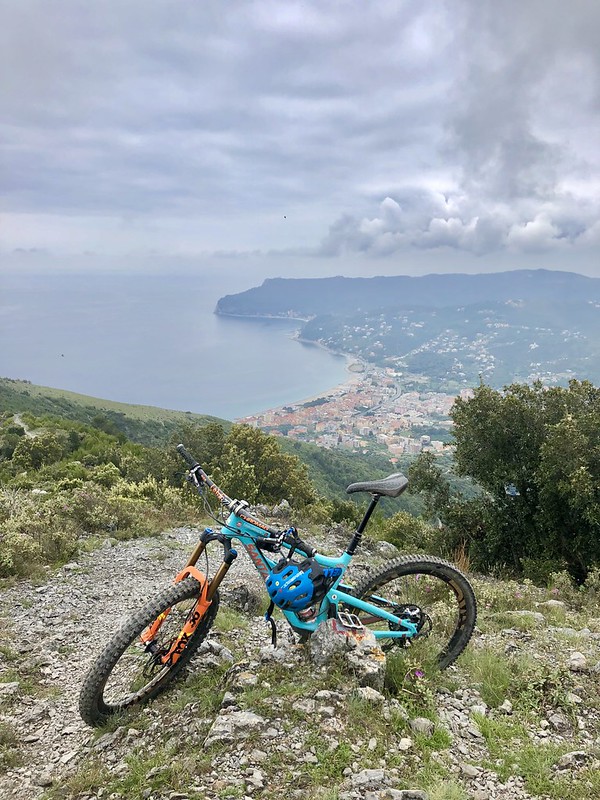 I started writing this over a month ago. It was never finished because of the last thing I posted. Started as a riff on Jess taking her ‘A’ levels and me off riding to Finale. Both final exams if you consider you’ve spent a whole lot of time working up to that.  There’s a bit more in the last issue of www.cranked.cc on why Finale is considered a destination at the end of a journey,  which hopefully is worth a read.

So how did it go? Well Jess’s finished her exams without quite exploding through stress and worry. She’s mighty relieved in a way that might be shading the indubitable fact that at least three more years of similar await at University. As experienced parents, we’ve decided that’s a trifle best left unmentioned until we get past the next worry-stone that is results day.

Finale was – in no particular order – fun, scary, really scary, balls out terrifying, wet, very wet, a bit less wet, drunken, more fun right up until the point someone broke a leg. We’ll be back to that. Although I don’t think it in any way ratchets down the tension if I reveal right now it wasn’t me who ended their holiday in ankle to thigh cast.

Finale Ligure sits close the Mediterranean sea. It’s a two hour drive from Nice – a city renowned for almost endless sunshine. Bit hot for your average ‘pale to angry lobster in sixty minutes of direct sunlight’ Brit in the summer months. May though, perfect. Dry and warm. Trails not blown out, town not too busy, guides happy to see paying customers and cheaper everything.

Yeah right. Rhetoric versus reality. It was never – aside from a couple of epic downpours – really wet, but it categorically wasn’t close to dry.  Driving through the alps we pointed at cloud formations dumping increasing wetness on where we thought Mount Blanc might be. Finale wasn’t much better so – honed athletes as we are – we hid in a bar until it became clear that at least one of us wanted to go riding. Again I don’t feel I’m giving too much away to say that rider wasn’t me.

Writing about riding in a way that doesn’t follow the ‘we did that and then we did that’ homage to yawning boredom isn’t easy. Let me say instead it’s an amazing place to ride a mountain bike. Somewhere near the best. Different to eveywhere else Ive been. In so may good ways. Some of those it not being France 😉 The people and culture are just wonderful. The old town a delight. The uplifts superbly organised. The guides really engaged and passionate. The beer not too expensive. So yeah not like France at all!

It’s not a trail centre. it’s a linked set of riding locations each with their own character. They race EWS here so some of it, well most of it really is challenging. And not without consequence. It’s not a place to be tentative. I’m sure it’d be easier in the dry. That’s my excuse for being tentative anyway.

The riding then. Let me go with vignettes.  Trail: Toboggan. After a first day of ever increasing rain. Now it’s lashing it down and we’re on sight dealing with slickness of rock and root. Matt is loving it, he’s a sick individual who gets off on these kind of conditions. I’m more shitting it, mostly in limp home mode. More so after nearly going out the front before arresting my forward motion by dragging pedal pins up my left calf*

I couldn’t help thinking what a brilliant trail it would be if there wasn’t a river running through it. Two days later it dried out a bit and was even worse! Then there was the iconic Rollercoaster. Top section is mentally fast popping off rocks and ploughing through chop. Some of the later guide-stopped features tho has me wondering if him explaining ‘Attentione, wet roots, 15 metres, do not brake’ was helping much.

Bottom sections. Steep and rocky. Those terms do not do it justice. Let’s go with FUCKING HELL WHERE DOES THE TRAIL GO? and REALLY, DOWN THERE, RIGHT NOW? OH FUCK. I watched Matt literally disappear down a feature. I assumed he’d been teleported to another dimension until I rolled over what felt like a vertical face before accelerating into a river exchanging water for fat, loose rock.

Rode so much of it. Walked a few bits. Just commit and believe. Especially if you’re dropping into a loose, steep steppy entry with about thirty Germans pretending not to watch. The fact that day we were in open face helmets made it just a little bit sweeter.

The bikes though are brilliant. This is what they are built for. If you let them go, they will save your arse and pump endorphins at dangerously high pressure. Tim and I loved one section on my favourite trail (Engineer) where you exited a rocky corner and – if you were brave – basically doubled the stump and a vaguely perceived rock. I may have whooped. There was also some panicked calls of ‘CODE BROWN’ which had nothing to do with the mud.

A 1000 words can’t do justice to an amazing week. And it certainly can’t document Tim’s journey from ‘can I borrow the spare bike to six pins in his Tib’. Like I say we’ll get back to that.

Was it as good as everyone who has been there endlessly bangs on about? Maybe. It was close. Exiting a damp minibus onto the freezing concrete of a cloud fogged NATO base wasn’t really selling it. Riding with my best friends in a brilliant location did so more successfully. Tim monging himself put a bit of a downer on the whole thing.

Will we be back? I think so. I’m not sure I did the bike justice. A bit too scared sometimes. Never felt totally dialled in.  Maybe I’m just not a good enough rider and too damn old to get any better.

Best do a re-sit then.

*this was quite nasty. We didn’t fancy the hospital** so the boys sherri-stripped it and handed me a cold beer. It looks okay now a month later. For a given value of ‘okay’

**there was time for this later in the week.