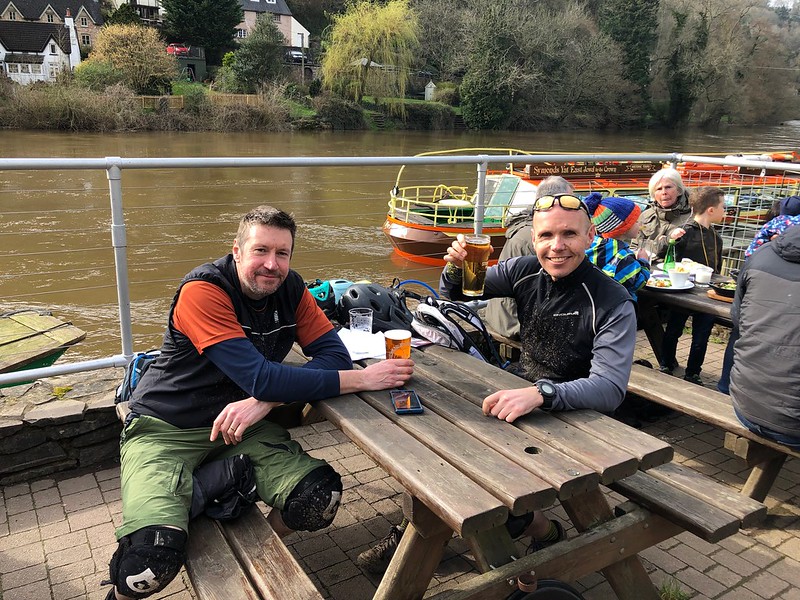 About three weeks ago if precision is on the agenda. Riding through a dead winter landscape long shadowed in unseasonal winter sunshine. I called it. Stupidly as it turned out. “Spring is here” summarised my happy mantra to Haydn riding next to me. That thing you see in front of you is the dry line. We’re done with the grim. Oh contraire.

The scientific method is something of a touchstone for me. So I’m not confusing the current climatic conditions with a butterfly flapping causal link to a man being optimistically stupid. Even so, I kind of wish I’d thought before speaking*, kept my powder dry, ridden the long game, and just accepted weather and seasons are really quite different things.

Ah but what a day. Warm sunshine blocking out the vista of nothing growing, dry trails lending grip to tyres not filled with February mud, bacon sandwiches enjoyed outside soaking up Vitamin D. Sure we needed an extra layer in the pub, but it still felt like early spring not late winter.

Then I got sick. Properly ‘don’t start any long books’ sick. It took over two weeks to de-escalate the certainly of ‘certain death’ to ‘possible death’**. I morphed into a grumpy snot monster with a cough clearly vectored for Tuberculosis . Stoic as I was***, the grimness encompassed Jessie’s 18th birthday and the last of the dry trails. I managed most of events associated with the former, while lamenting the latter through industrial quantities of Sloe Gin. No point risking malaria as well.

So yesterday we were back out once the rain turned up like an unwanted relative at Christmas, and showing no sign of sodding off until lent. While this was moderately annoying, I couldn’t help thinking it was fairly consistent with March. Comes in like a lion and leaves like a lamb apparently. Or – as I like to think of it – rainy bastard with the chance of snow.

Riding out we couldn’t help but notice some puddles. Nothing was underwater, but a few of the trails had that look about them. Roots were slick, dirt was moist, skills were lacking. Had to lean on the front a bit to reacquaint myself with the whole ‘back there for partying, up here for thinking’ mullet technique.

Sideways rain wasn’t exactly a proxy for Spring either. We hid in PedalaBikeAway where pig sandwiches and hot coffee fortified us for the long ride to the pub. We ignored the ridden out rutty trails taped off for the Forest enduro, and headed west into the cheeky side of our riding realm.

Careful selection of trails avoided the horror of twenty minute plasticine climbs in what I’ve come to think of as ‘quick-mud’. Step off here and they’ll need to drag you out with a tractor. The similar sized tyres on my SolarisMax were working surprisingly well in the gloop. The front aiming me in the right direction, while the rear shimmied about in an amusing fashion.

Last three descents are all belters. The first an off camber loam-fest dropping into ever steepening turns. My plan to ride it feet up failed to survive first contact with the dirt. Tripod’d a few corners but not with my head so considered that a win.

Up a fireroad climb before dropping into a two pitch delight that’s fast and open until it isn’t. Rooty and nadgery between unforgiving trees makes keeping your head up and trusting your tyres the only way to stay in touch with the riders ahead. It’s all getting a bit lairy out back, but I’m staying off the brakes and riding the slide. Stuff of life right there.

We roll out though a muddy ditch and there’s lots of banter. ‘That bloody stump, nearly had me, reckon I tapped it with the rear, so much fun’. That’s pub talk, and we’re one descent from the river where our favourite hostelry awaits.

It’s an ever changing rock filled ditch. Relentless rain has opened up crevices and chutes hidden under last years leaves. It’s fun on the hardtail, but you need your wits about you as 3-D problems plant themselves in your optic nerve.

We ride the first section well and then accelerate onto a narrow ridge which disappears near the trail end. Option a) is to brake hard and drop gently into the mess of rocky chop. Option b) is more of a ‘ah fuck it, it’ll be fine’ brakeless plunge into the chute while hoping for the best.

The best was very good indeed. We giggled our way back on the old train track and got the beers in. Sure my bike is a muddy cipher of something I barely recognise, and my ride kit lies festering in a bucket, but we know it’s just going to get better from here.

I called it too early. But Spring is coming. I can’t wait.

*to be honest, this isn’t the first time such a thing may have happened.

**no medical professionals were consulted to confirm this diagnosis.

***In the Leigh household, there was a vigorous debate over the exact definition of stoic.