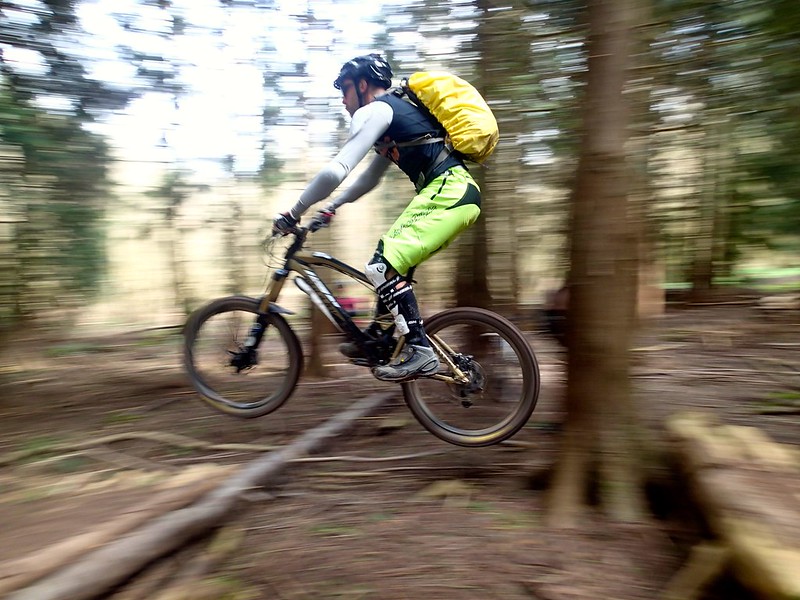 … is traditionally defined as the process of identifying the breadth, scope and reach of activities to transition effectively from the current state to a desired future state. Sounds dull? It is, and I should know with it representing about 25% of my work right now.

It serves us here on the Hedgehog rather niftily as both a synonym and a metaphor.  The current state has been fixed for at least five years, the future state sees me the far side of something scary and the activities to get there can be summarised as ‘jump over that bloody gap you spawny git’

If only it were so simple. Or more pertinently so much shorter than the physical reality in front of me. It’s a whopper. Already over 3m if you’re measuring the great big bloody hole ready to swallow up ‘Alex the Timid’ and nearer 5m when including entry and exit ramps.

Speed is definitely your friend. Unless you come up short in which case it really isn’t.  Next stop massive cartwheeling crash, with potential non-optional visit to hospital.

All of this has been a bit moot until recently. I’ve never imagined myself clearing it, while images depicting splattering myself all over the forest fill my hindbrain whenever the gap hoves into view.  So I’ve taken the sensible option of giving it the chicken-swerve.

The problem is bloody progression. I seem to be riding quite well lately – other than crashing myself silly which shall form the cornerstone of the next www.cranked.cc article – so what was really never more than pub bullshit ‘yeah I’ll get that nailed one day’ has now become ‘sober-doable‘

I’m a coward tho, so just because I can absolutely does not mean I will. Then all my riding buddies crossed the bloody Rubicon – firstly Cez but that’s okay as he’s a way better rider than me and, helpfully for this situation, fairly bonkers. Next up is Matt – again a far more skilled rider but a little more considered in terms of risk/reward. He was followed over by Alex W, another who is definitely handier on a bike….. hang on let’s just save time and assume EVERYONE is a bit better than me.

Right, we can move on. Only I couldn’t. Perfect conditions in late Autumn meant this was going to be ‘the day’. Just Matt and I so no friendly haranguers pointing phones at my imminent demise. The key to the gap is actually the jump before. Clear that by landing fully on the transition, and you’re at the perfect speed to hit the ramp of the MONSTER ABYSS ATTEMPTING TO DRAG ME INTO OBLIVION.

I really need to work on my positive thinking.  Any road, we hauling a fair lick on grippy dirt and I’m right behind Matt as he sails over the qualifier. Somehow tho –  because I’m a Doofus – I manage to fuck that up and drop my rear wheel short of the transition. I lose speed, and Matt’s rear wheel as he comfortably flies over 10 feet of fresh air to kiss the down ramp.

I come to a shuddering halt and swear.  Bollocks, we’ll go again. This time I hit it a little sweeter and I’m in a great position to conquer my personal nemesis. Only somehow I’ve grabbed a shitload of Shimano and scooted into the chicken run. Matt looks round ‘Did you….’ but he can see I did not. And he can hear it as well. I’m grumpy for the rest of the ride. And the rest of the day because now it’s November, meaning it’ll be Spring before I get another chance.

Except this exceptionally dry spell has left the trails mint-y mint. We’re on a long ride and the gap is close to the last descent. I’ve been going well and Matt asks if I fancy a crack at it. I mull the idea up a 10 minute climb, before deciding I’m basically out of excuses and it’s either Shit or Get Off The Pot. Hopefully not thinking too literally here.

Did I want another look at it? No I fucking did not. I’ve looked at it a 100 times. Mainly from a ground based position riding around the blighter. Right then,  we’re straight into the trail and it’s feeling good until Matt slows down. What the hell is he doing? Before the relief we’re not doing it washes through me, he’s off again heading for the qualifier.  Oh we are doing it then. Super.

I have never hit that jump so well, hardly felt the landing, and we’re accelerating hard down the slope past the point of no return. Not for one microsecond was I going to bottle it. My mind – as it does at such times of stress and worry – shut completely down and I handed the whole thing off to muscle memory and Newtonian physics.

You do hit it fast and there’s a real feeling of being in the air for a while. Then you’re not, and I’m a little nose heavy on landing but nothing that’s going to throw me out the front door. I totally fail to make the corner as I’ve chucked the bike away and am running around gesticulating wildly and making senseless noises*

Cez asked if I wanted another go for the camera. I decided probably not. I’m so wobbly from all the adrenalin and relief, I can barely stand up never mind poking the monster again. But next time will be a whole lot easier.

So the picture up there isn’t me. It’s Pete from a few years back**. It doesn’t really show the full horror of what’s going on. Obviously I’m making it sound WAY harder than it is, but when I moved here at 40, I couldn’t jump over a log and at 51 I’m still riding harder and scarier stuff.

This makes me feel like a five year old. And that’s risk/reward right there 🙂

*apparently no one noticed anything different to normal.

**and it’s longer than that now. Honestly, ask anyone!