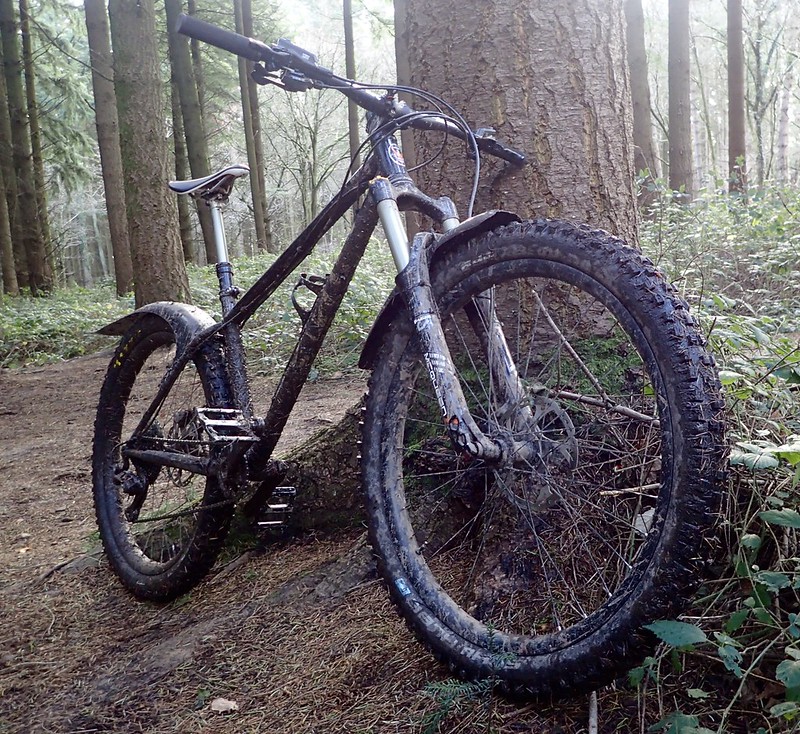 Much of this blog is dedicated to cataloguing my pervasive rubbishness of all things bike related, with much general life stuff also taken into consideration. Some would hypothesise this is simply the self-depreciation of a man uncomfortable with his entirely un-English aura of awesomeness. Others – who have actually met him – would consider it purely as a restatement of fact.

Riding in mud is an excellent retelling of the oft misunderstood maxim that ‘it is the exception which proves the rule’.*  When the days are short and the mud is long distanced from the hardback of summer, I find all sorts of interesting ways to fall over, fall off and generally fail to make any kind of discernible progress.

There are reasons for this, but we’re not going there. I’ve been there so often to review that pantheon of uselessness, the boring bits get fast forwarded in my head.  This year though something has happened. An old dog may have learned some new tricks or at least not relearned the annual ‘how to be crap’ lesson once the trails aggressively posture their ‘moisture first’ strategy.

I’d love to say this epiphany is somehow skills based. Conquering mental weakness, performing flashy brave stuff, playing what’s in front of you, that kind of thing. Any such proclamation would be a big fat lie though because we all know old dogs really don’t learn new tricks at all. No instead they go tyre shopping**

A mountain biker without a rubber fetish is merely an amateur astride a dandy steed. The professionals amongst us are fully paid up members of the Durometer club. We are at home with threads per inch, we carefully study tread patterns, and the complex language of compounds being nothing more than an open book.

The outcome of which was a tractor derived monster tread fetching up on my front rim. A slightly less aggressive companion migrated to the back. The Internet smugly dismisses plus tyres as pointless for mud. Now my SolarisMax was shod with chunky 2.8 inch tyres at 12PSI, it was time to go rule proving and myth busting.

Onto trails which had had some rain. And then some more rain. And then downpours sweeping spitefully over leafless terrain. Not quite enough though to saturate the hardpack baked solid over that endless summer. So wet over hard then. My absolute favourite.

To ride in the winter, you must create an entire belief system around your front tyre. Regardless of the mud splattering your eyeballs, the uncertain balance from going sideways, and the unceasing wetness spiking your peripheral vision. These are for nothing if you keep the faith.

A decent bike handler knows what grip feels like. A really decent one knows how hard they can push beyond that. An average Joe like me can get all Newtonian with opposing forces and trust in R&D over marketing.  These tyres will hold a line if you weight them properly while showing a bit of commitment.

And when they do its glorious. A whole world opens up in the damp and dead forest. Narnia is out of the closet. You can push, push, slide, push a little more and then back off before disaster strikes. Even when it does, speeds are low and a full body mud immersion is the only real collateral damage.

Do this a few times and now there’s a bloke wondering if we should have a crack at another trail. Even when the pub is open. This hardtail is the perfect winter tool – it’s direct, consistent, not wallowing in pointless suspension and – afterwards – bloody easy to clean. It’s the tyres which make it tho, tempting grip from slick surfaces so egging the bloke on top to make a proper dirty protest.

There are limits of course. Steep and muddy. That’s Mr. Crashtastic gunning for me on every corner. Freshly cut trails offer nothing but wheel swapping and significant opportunity for a little lie down. Polished roots are winter snipers patiently waiting to take you down.

The last of which had me throwing shapes after taking line liberties no tyre could save me from. I threw the bike away, as it wasn’t offering much help, to slide into a bombhole on my arse. After checking myself out and foraging the now camouflaged bike from the surrounding shrubbery, I found I couldn’t actually get out. That’s how good the tyres are- you can ride even when you can’t walk.

Crashing is fine. Punctured hubris is not a new sensation. For a few corners before though, I felt I’d finally got this mountain biking thing dialled. The bike was turning and drifting at the same time which felt absolutely fine. I’d exchanged my normal tentative wafts at the bar for confident full limb prods to ride the slide. That’s the dirt talking to you right there however pretentious it sounds.

In the pub all I wanted to do was get back out there. For the past ten years all I’ve wanted is it to be April.  Sure it’ll get old before it gets better, but right now our half of the planet just spun its face to the sunny side. We’re on the long road to Spring.

Before that though I’m going to have some fun playing in the mud.

*’Proves’ as in tests like in baking, not as in law. Otherwise it’d just be statistical nonsense overplaying the importance of outliers.

**I appreciate this is stretching the metaphor a bit. But hey throw me a bone here 😉