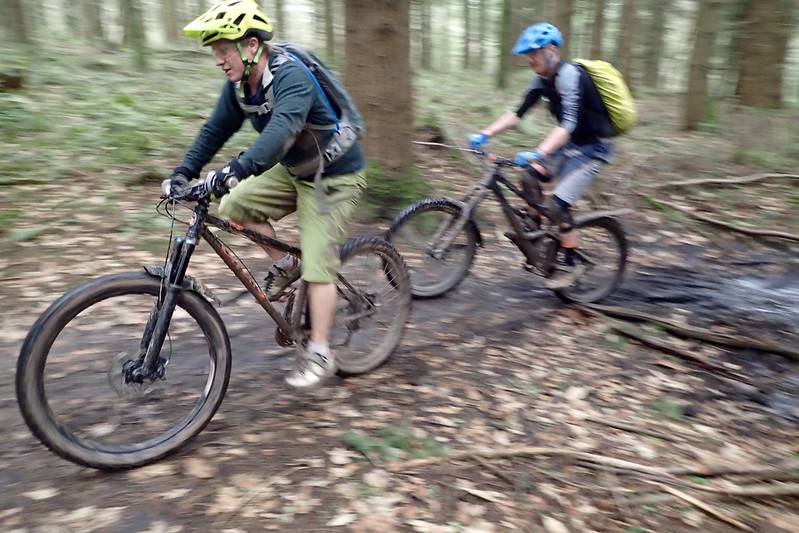 Seasons, weather, trails, me. Not that actual change you understand, because that’s in the same bucket of bad science which advocates blokes sharing the birth experience.*

If that hippy shit was underpinned by a shred of empirical evidence, I’d be menopausal on an annual cycle. Nights draw in, rain is meteorologically normalised, rock hard trails lets themselves go, and I’m caught between listless melancholy and a strong desire to migrate a thousand miles south.

We’ve established – in much retelling and tedious detail – that I’m no fan of the fourth season. It’d be no surprise if a gift subscription of an ancestry website would confirm me Californian by Christmas** None of which challenges the basic premise that if enjoyment was to be found in slogging through mud I’d have discovered it long ago.

Still as some pompous twat once felt the urge to share ‘be the change you want to see’***. What I saw was a week of Atlantic lows pushing unbroken cloud across our part of the UK in an apparent attempt to drown it.  Arrangements had been made however, and after a week of wondering why everyone else had knocked off for Xmas early except me, it was time to go find myself.

I found myself peering out of Matt’s garage into the pissing rain, while two of my bikes were being readied to battle those elements. And probably returning  requiring some form of trust fund to deal with the consequences of dragging expensive components through two hours of organic sandpaper.

No matter. I was riding my fab SolarisMax with a 2.8 front tyre clearly designed to find grip most chubby offerings never got close to. I know this to be true because my (well Jess’s really) old SolarisMax was being ridden by my old mate Ian. I wondered aloud to Matt if we should share the terrifying characteristics of the summer tyres with which it was shod.

We both felt this wouldn’t be helpful. After Ian fetched himself out of the shrubbery on about the fourth occasion, I felt the moment has probably passed. We were having fun tho – not only as his expense – because the sun had broken out to shine weak winter sunlight on trails not yet totally destroyed by that season.

It’s still early. While any attempt to steer may not be met with the expected Newtonian change of direction, we’re not yet death-marching through joyless rim deep mud. Oh I know it’s coming, but denial is a wonderful thing when you’re reacquainting  yourself with fusty bike handling skills. You know the ones – let the tyres move around without instantly triggering a panicked brake event.

We know how that ends. Don’t we Ian? Still since he was riding tyres I’d darkly labelled Schwable Suicides, any corner he found himself heading in the same direction at the exit he’d hoped for at the apex was something of a triumph. Watching him hold a mega slide on a steep chute was quite the thing to behold. Especially as I’d had a double dab and a involuntary swear word a few seconds earlier.

Still having already put myself in the frame for an accomplice to manslaughter, when sending him out on those tyres, I felt it only fair to warn him of the final gap jump separating us from beer and medals. I was having such a good time not actually hating it, I may have passed it off with a level of insouciance not entirely appropriate to the conditions.

Things going well in my little world don’t always translate to others. I’d been leaning on my front tyre, and giggling as the subsequent slides punted me gloriously into the next corner. I’d been improbably lucky sliding between the trees without actually hitting one. So now I wondered if a seasonal Strava name change to ‘HipSlider Moto’ could be considered as a non ironic mnemonic.****

Having left vague instructions on where the chicken run might be, I did my best to keep Matt in sight as we headed into the valley. The grip is awesome I almost shouted before it wasn’t, and I found myself blazing an entirely new trail some two metres from where I’d much rather be.

Drag it back into line. Two hard pedal strokes. Don’t look at that root stack on the corner. Look instead at the sloppy mess of the take off and hope the landing isn’t quite so perilous. It isn’t and we’re heading home with big smiles and a bottomless love for riding bikes.

Even Ian. Who decided to have a crack at the gap. His entry we liked, although a harsh critic would suggest exit velocity was a little lacking. Which may explain how he landed mostly with the front wheel on the dirt and the rear scrabbling to fetch itself out of a big hole. Inevitably this ended in man and rider parting company, with the former ploughing a full body furrow into the moist dirt.

No harm done and fair play for Ian having a go. We had another go today in the Forest and enjoyed it just as much. I’ve not idea why this is, because traditionally I loathe this time of year.

Going through some kind of change. Might be wondering how many winters I have left to ride. Might be a great front tyre. Might be something else entirely.  Not going to over-analyse that.

Riding bikes makes me happy. Shit conditions can do one.

*I vaguely remember a prenatal class where prospective fathers were asked to perform a simple task while holding a baby-doll. In terms of making coffee we did a great job, in terms of babies being left in sinks, upside down in the coffee grinder and repurposed as footballs, not so stellar. Exactly no lessons were learned.

**Or directly related to Henry VIII. Like every other poor sop who throws money down that particular rabbit hole.

*** Which made me wish very hard for them to change into a person significantly less annoying.

**** Obviously not. Delusion can only take you so far.