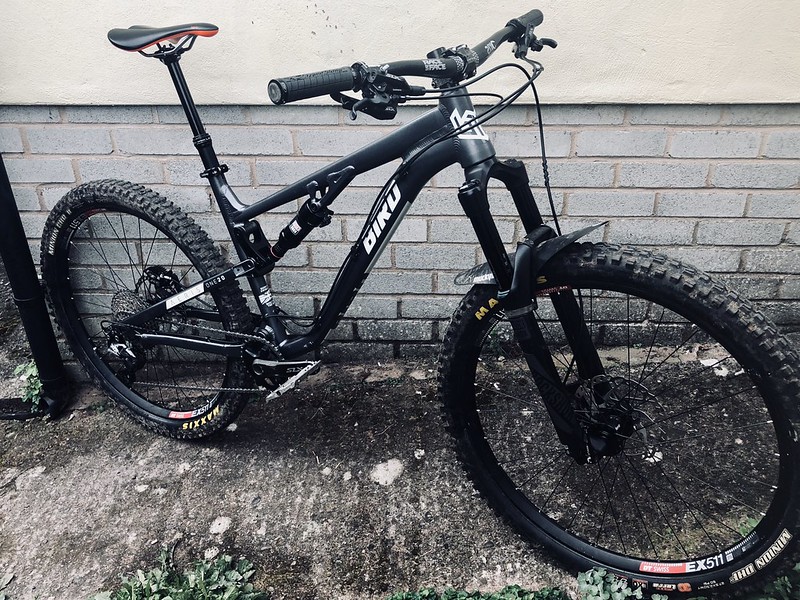 Back in the midsts of time* I bought a Bird Aeris. 4,500 kilometres and some two years later I sold the remains to a young grom whose world – according to the the instagram lie filter – was mostly up in the air whilst tilted sideways.

And that was some of the problem. The Aeris was a bike which came alive about the time I began to worry I wouldn’t be around for much longer. It didn’t reward the tentative rider, the man on the brakes, the poorly body positioned. That’s not the reason I sold it though – although ‘reason’ is as ever conflated with the ‘call of the shiny‘

Oh the shiny. It’s a constant companion. Both a source of joy and a financial handicap. Mojo3, FlareMax, Fat Bike, Chubby Bike, another chubby bike, settling the wheel size debate with a firm punt at 27.5. And then 29. Somehow I ended up with three full suspension bikes none of which were quite right. We’ve been there, let’s not go there again.

Somewhere in the madness there was method.  I wanted a full suspension bike that’d survive the brutal slop and grit of a long Forest winter. The Smuggler failed to fulfil that role mostly due to a design predicated on mud never being more than an occasional annoyance. The clearance in the rear was parlous at best. When it got worse I’d be carrying the bloody thing due to the rear tyre wedged firm in the seat stays.

That’s exactly what happened to the Mojo3.  With about 50% of the mud. So now I had two bikes that were perfect for a) California or b) 8 months of a UK year.  Roll on twelve months and post a ruthless review of what I actually needed left me with the brilliant RipMo and laughing-in-the-face-of-a-UK-winter SolarisMax. The latter being two bikes via a simple swap of death-by-tyre chubbies to some proper 29er rubber.

Still with me? Good effort as I’m just making this shit up. After my personal dissolution of the monasteries, the ShedOfDreams(tm) had the look of a space recently burgled by an extremely discerning bike thief. Scattered amongst the remains were a set of previously enjoyed spares missing merely a frame to make them whole.

We’ve been here before. And whilst that is not surprising, it does at least provide me with the slenderest thread of logic to explain my latest purchase. The original Stache was nothing more than a parts mule configured for winter. The fact it didn’t last that long before the glare of the shiny burned it out is hardly worth mentioning.

So here we find ourselves with a box full of parts desperately needing a home, a hotel internet connection and a month long moratorium on weekday alcohol.  This  kind of abstinence is exactly why I drink in the first place to avoid the clarity of thought to buy yet more bikes. It may be detrimental to the liver but it has a positive effect on my bank account

Much browsing ends with a certain inevitability of choosing a frame matching a set of simple criteria – do the parts fit, does it have some proper tyre clearance, is it cheaper than the last bike I sold, is the bloke selling it not a total fucking psychopath?**

Four greens. And it’s a UK brand run by three blokes I’ve a lot of time for. Just the right amount of travel and only a few miles from box fresh.  It even had some frame protection tape applied – possibly while drunk – so saving me the potential marriage ending argument with Carol on exactly the best way to apply it.

I considered building it myself what with a shed full of spares, a wall full of tools and a fridge full of beer. But with great age comes great wisdom so I handed it over to Matt who twirled spanners in about four dimensions muttering darkly while rebuilding wheel bearings and engineering his way round lost parts.

As ever I was lost in awe and impatience. I’m really not good with the gap between ideas and completion. Finally the bike was handed over to check if anything was going to fall off before a proper ride tomorrow. And as usual, nothing did even with me dicking about riding down a few steps and attempting to tear fat tyres off wide rims.

Matt asked me over a beer if I thought I’d be a better rider if I didn’t buy so many different bikes. That brought me up short. Having considered it though, he might be right but it’s not really much of a concern. I’m comfortable being average when the fun of chasing silly dreams is more than a compensation.

So tomorrow we’ll ride still dry trails. There’s something comforting about doing the same thing and expecting a different outcome. And the nice thing about circles is you can keep going round.

**That was strike 1. Even a man as ancient as I was still moved to wonder ‘what the fuck was he on?’ at the end of a non transaction.