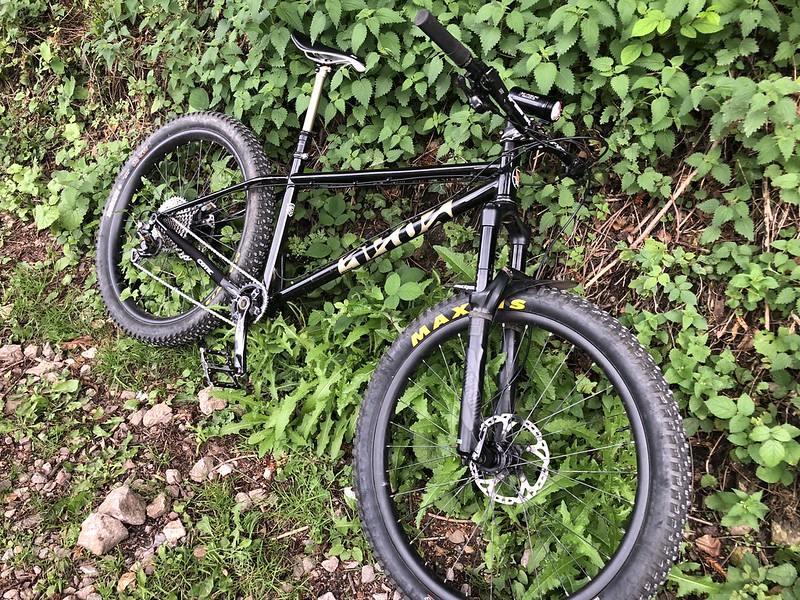 A mere twelve months ago I was celebrating not being quite dead yet. Roll round to right now and another year has been happily scratched in the side of the virtual casket.

Physically things aren’t quite so good. Ankle is mostly recovered from stupid running accident, but the left knee isn’t quite so clever. The right one has recently shoved into my litany of injuries with a worrying creak. It might be suffering the extra half stone I’ve failed to shift since my ‘lifestyle change’ of drinking beer in hotel bars and eating chips failed to bring forth any weight loss at all*

Still alive tho, and the ride before the actual birthday found us racing the night on loamy trails marked ‘best present ever’. First we had to climb to the start of them simply, if painfully, delivered via a fifteen minute yomp up a handy fire-road.

I made a bit of an effort what with being in decline denial and riding the hardtail.  Arrived behind a couple but in front of a few more. One of my best times ever apparently- an achievement somewhat offset by the parlous state of my legs and lungs as I collapsed weakly over the bars.

No matter, the effort unlocked a first trail snaking between and over four fire-roads. Tonight we rode it as one section on pretty much perfect dirt. More than enough grip to push the tyres hard into turns, but not so much to prevent flicking the rear out with judicious use of hips or – if you’re lazy like me – a gob of brake.

Injuries and girth not withstanding, I don’t appear to be getting any worse at riding a bike. Tonight I felt good, confident, reasonably strong and happy to be out with my mates. Which was good as the next trail is a proper step up.

And step down, some stepping sideways as well. The formidably named ‘Rockadillo’ dispenses with the standard forest trope of hard dirt and soft borders. Instead it’s rocks for breakfast, lunch, tea, supper and possibly hospital. They might as well name it ‘punctured spleen’ and be done with it. Absolutely nowhere to fall that isn’t going to hurt lots or impale a vital body part on spiky granite.

I’ve never ridden it clean. I’ve walked bits of it. On the RipMo. Shouldn’t be a problem then in the twilight as night dragged away the day and we dived under the trees. Still what you can’t see can’t hurt you. Until it can. Not on my pre-birthday ride tho, I remembered just enough to death-grip the front brake while picking lines where there were no discernible lines.

Deep breaths and trust get you through. Still didn’t clean it tho after clattering on a rock before the last obstacle. A fallen tree happily placed above a pool or rocks shining dully in the dipping sun. Ah fuck it, not carrying over it, push back up, get settled, pick a spot away from the scary bits and plop the hardtail over with absolutely no attempt to jump those rocks.

Big chubby wheels help here. It’s not a fast rock-smash, more a pick-and-mix line choice. Precision is good, recklessness is not.  Wise words from an old man- surprised it was me really. Whatever, we’re through and it’s a hoon to the valley floor back on hero dirt. And a climb where one particular hero was regretting his earlier epic saga on that first hill.

It’s getting proper dark now but we’re not ready to fire up dusty lights just yet. So there is no time to hang around as we drop into our final trail. Starts with a fast chute with nothing other than trees guarding the ribbon of singletrack. Cresting a rise changing everything; now it’s stumpy rocks hanging off steep hairpins.

Peering through the gloom, I make a decent stab at it maintaining enough speed to float and not enough to pitch into something sharp and unforgiving. Having solved the rock maze, all that’s left is a nasty three foot drop off a rock which merely requires a rolling manual to dispatch.

Only one issue. I can’t do rolling manuals. Fuck I’ve tried. Practised for ages. Earth bound misfit is how it always ends. Swerved this obstacle too many times. Bollocks to it,  these are the moments which separate being 51 and 11. Roll in, make a half hearted attempt to pedal kick, panic as – predictably – nothing happens, so wrench the bars upwards, brace for impact and we’re down and mostly safe. If a little creaky in the knee department.

Rolling to the pub, Jim somehow managers to ram a blameless rock on the family trail and do himself some damage. He refuses to ‘Stella-rise’ the wound with an appropriate lager, so we have one for him. And one for my birthday. And maybe one more.

Feels good. More than just still alive. Feeling properly alive. Struggled to sleep that night not because of my standard mortality fear, more reliving that ride and wondering if the next might be nearly as good.

*I know. It’s bonkers. Everyone I see in that bar most weeks are also pretty fat. I think we’ve been mis-sold 😉