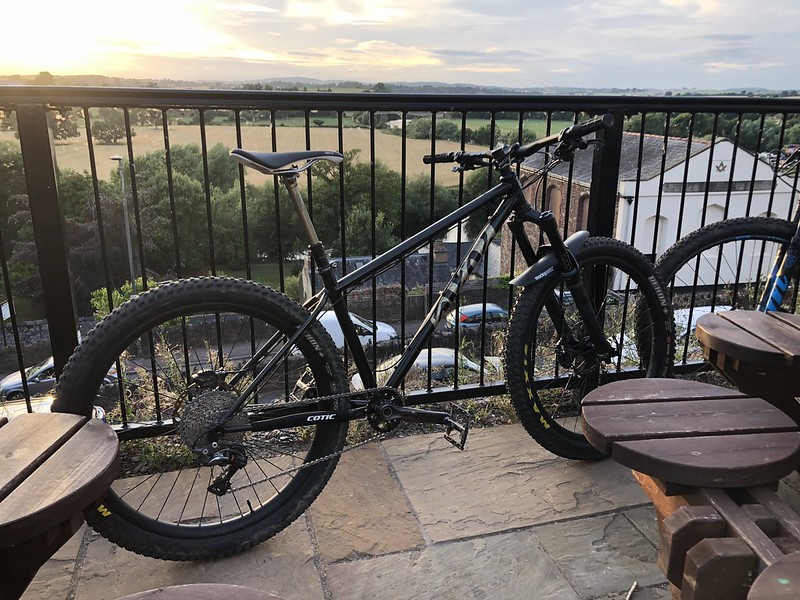 There’s a fine line between an carefully considered hypothesis, underpinned by empirical data, and an entirely implausible excuse for a new toy. Let’s be charitable here and assume this latest purchase can be counted in the first category.

Or for the cohort of the world easily defined as ‘everyone but me‘, let’s not.  There are reasons of course, because there are always reasons. It hardly matters that this latest addition to the ShedOfDreams(tm) has triggered a schism in my bike collection. A splinter movement if you will. I certainly have, breaking down the much loved Mojo3 and the slightly less loved but still guiltily stripped Smuggler.

What’s left is a litany of spare parts, a newly built frame, a re-engagement with the nonsense of eBay, and a whole lot of soul searching wondering if this represents logical decision making or headless chicken randomness.

It it’s logic, it works like this; the RipMo is so studidly good, I’ll probably not pick to ride the Mojo when choices must be made. No abstraction here – last Sunday I prepped the Mojo for a long ride, pushed it out of the shed, breathed deeply and put it right back in there. Exchanging it for the RipMo pretty much sealed its fate.

That bike was amazing; no hyperbole here, it really brought my riding on – from a low base for sure – and gave me confidence to go a little harder and a little deeper into the adrenal zone.  For a man of my limited skill and advancing age, amazing feels like a mean description. It was better than that, way better than me, and undeserving to be sidelined for the false promises of new shiny things.

The Smuggler a little less so. I liked that bike a lot but I never really loved it. There’s a different- trust me on this. It’s really important, you’ll need to take that under advisement as well. Okay so if the RipMo negates the need for three full suspension mountain bikes*, where the hell does a hardtail come in?

Well it came in last year. But that one is Jessie’s** and while I ensured it was fit for purpose, it was always a bit small for me.  The new one is not. Bending to the marketing winds of ‘longer is better’, this medium sized frame pokes out an inch and a half beyond Jessie’s Mark 1.

Other things have changed as well. I barely considered them having seen the images of  the only colour worth having. It was only a short jump from there to poorly wielded spanners and better excuses.

This frame didn’t have an easy birth mostly as I’ve been bastard busy trying to wrangle an metaphorical octopus into a string bag without losing a tentacle. So I’m blaming work for getting in the way of remembering to order vital components not available from asset stripping two perfectly good frames

No problem we just butchered another one to bring this one to life. We even had lightening to electrify the process. I’m more your Dr Frankenstein to Matt’s monster on the grounds I really don’t have the hair for it. Still it was me sent out into the pissing rain to determine if pointy things were pointing in the right direction and stoppy things were sufficiently arresting.

It seems not in the case of the latter mostly as Klutz-Boy here had deposited a bath of dirty paraffin onto the front disc.  Still what’s the worse that can happen?

Does riding into the shrubbery whilst making keening sounds count as ‘the worst’? Probably not. Still it was an interesting start to the ride although not quite as exciting as a two ton car shaped ram attempting to punt me into the next county some time later***

In between I had a fab time. This is my seventh Cotic and much of that purchasing logic is based on Cy knowing how to design a fun bike. This one is definitely fun, possibly a bit more than Jessie’s as it’s a better fit, has a longer fork and is entirely new. Let’s not debase ourself searching for quantifiable evidence here.

Better still was getting out with an old mate. Riding trails returned to hero dirt by a weekends’ rain. Hint of loam, flick of the hips easily brakes the grip of a rear tyre not encumbered by suspension, slide it round, get it pointed mostly the right way, giggle, repeat.

I love the RipMo for what it can do. How perfectly the suspension design works everywhere. When things get a bit scary, it’ll save you all sorts of pain. It’s somewhere close to the perfect trail bike in a way the Solaris really isn’t.

Most of the evening was spent trying to get the bloody thing stopped, dodging trees, catching slides, releasing the brakes more in hope than any kind of learned technique, and careering through the forest like a one man morris dance troop.

Or to put it somewhat better; to feel eleven years old while being allowed to drink beer celebrating the success of another fantastic new bike. And to toast those whose time has passed.

So don’t get me started. Because I don’t want to stop.

*It’s hard to correlate a ‘well formed and fully funded roadmap for the perfect bike collection‘ with ‘why do you have three bikes that look very, very similar?’

**She’s ridden it once. That pretty much codifies possession.

***My righteous anger was somewhat mollified when it was pointed out that it was in fact now proper dark and we were essentially riding in stealth mode with no lights.