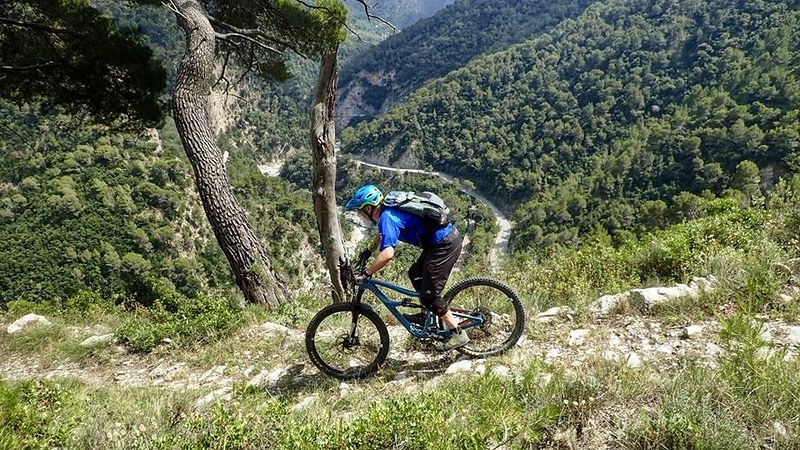 Option 1 is to examine the 3-D puzzle in front of you, considering radius, incline, camber, rock formation and exit points before deciding that as someone else has already ridden it,  you really don’t have too. Engage the 31inch gear to pivot a now stationary bike 90 degrees and die just a little bit inside. I say option 1 but after riding about a thousand of these tricky bastards over the last week, it would be considerably more accurate to label this my ‘Default’.

I did get better. Just not much. Not for me the technical skill of nose wheeling or terrifying prospect of sliding in – both wheels long gone from grip – and snapping the front end round using some form of secret hip dislocation.

Sorry for the digression there. Much as I treasure my riding friends, watching most of them perform these acts of insouciance does occasionally trigger a teeth clenching grunt wondering if it is okay to hope it may sometimes end in just a bit of a disaster.

Not full disaster tho. Which is the unique selling point of option 2.  Essentially a two second plunge to splatter oneself in the gorge below after the rider has failed to solve the equation ‘amount of skill required > amount of skill available‘. I’m not a big fan of exposure and even less keen on certain death, but a week riding these kind of trails did provide a mid holiday upgrade from ‘very slow and frightened‘ to ‘well I’m pretty fucking old, so best not die wondering’.

Leaving only option 3 as framed by that image. And the obvious tension in my riding. ‘He’s got the bloody camera out, I’m going to have to have a crack‘ summarises most of what was going on in my brain about four seconds previously. Yes I am as shallow as a tea spoon when it comes to this kind of thing.  So stop snivelling and remember what Chris – our proper ex DH pro showed you – edge of the trail and then a bit more, there’s grip in that vegetation, don’t look at the gorge far below, don’t bleed all the speed off, squeeze the back brake, flick the hips, feel the slide and get off both brakes the second you can see the exit. See easy?

I’d distilled that script from following Chris earlier in the day. Like many great riders, he’s annoying hard to dislike. Give me arrogance and gracelessness any day – at least that way you’ve got an excuse to file people better at stuff than you in a bucket marked ‘Decent rider sure, but what a colossal shit gibbon‘.

I’ve been lucky enough to be comfortably in double digits to trips to far off places. Mostly with the same gang, but this time we had extra riders – different dynamic, same maxim holds ‘location is an important thing, but people are the important thing’. 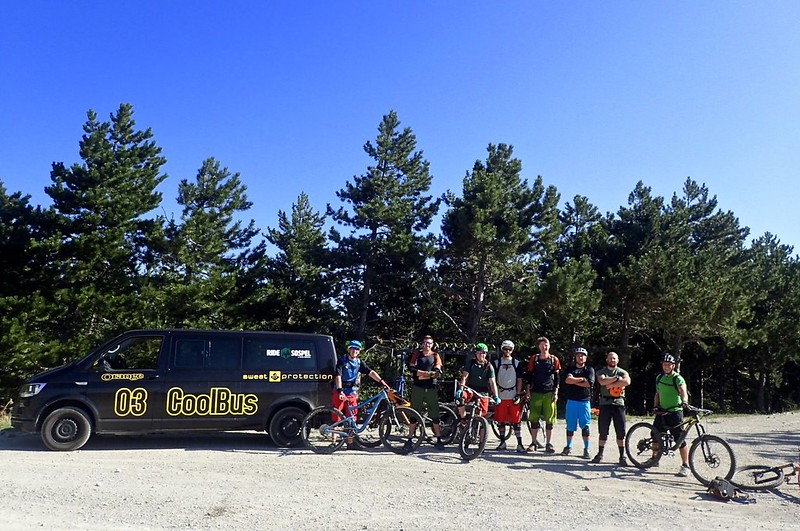 The bus was pretty splendid as well. Cool as the name suggests. And much required not just because we’re feeling lazy. Sospel is a proper medieval French town split by the river, which brought it into existence hundreds of years ago, and comfortably nestled under muscular hills reaching up to around 1800 metres.

The trails are spread across the 360 degree panorama we took in every morning from the balcony of our fantastic villa. Without the bus,  there would be a whole lot of unpleasant climbing on roads clinging to the valley sides, then white fire tracks baking in the forge of thirty degree heat and high humidity.

Sod that. While I like a climb as much as the next rider, it’s obvious you’d be lucky to get two descents a day without the uplift taking the 1000 metre strain. And while the mountains further north may superciliously look down from their more vertiginous peaks, they would be conflating height for quality.

The trails here are stunning.  Dropping onto natural paths mostly made a thousand years before the advent of a Mountain Bike.  Surfaced by interchangeable bedrock and loose rock, before diving under a forest canopy where the chatter of pinging stones is replaced by the silence of springy loam.

There is little respite from technicality. No easy trails. Anyone who tells you riding downhill for a week is easy has clearly never tried it. I am more battered and bruised than any other riding holiday. More time to crash basically. And crash you will or ride you won’t. So much stuff at the edge of my comfort zone and then some way out of it.

Of course I didn’t ride it all. But by the end of the week I was riding a whole lot more including that switchback up there which had my arse twitching like a rabbit’s nose.  Only on the last day, when mental and physical fatigue rendered me tentative, did I realise how unrelenting riding on the edge is, and how much damage you can do when you fall off it.

Don’t for a second mistake that for any kind of negativity. It was an amazing week riding a brilliant bike** with a bunch of idiots sharing a passion for mountains, riding, bullshit and a general joy for living which – unsurprisingly – makes your realise how bloody good it is to be alive.

Still enough of that. One day at home and then back on the road again. To hotels with Internet connections.  Plans need to be made for where we’re going next. Frankly I don’t care as long as it’s somewhere. Maybe with just a tiny bit less death by switchback tho 🙂

*that’s me of course. Others treated these obstacles with a combination of skill and disdain I can only dream of.

**oh and that bike is brilliant. There were moments when I was laughing out loud how good it was. Mostly though that was also the time I had my eyes closed.