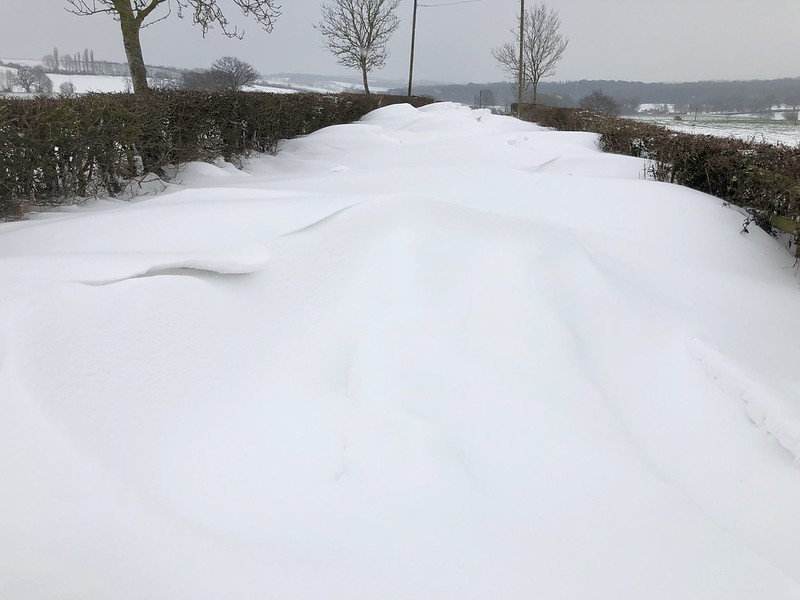 300 yards east of that image location is the main road. Which must mean this is our lane, which rises gently from the house on the standard Herefordshire gauge predicated by the pervasive road-narrowing scheme.

It might as well be on the moon. Similar ambitious forays into orbital mechanics would be required to transport any vehicle from here to there**. Switch the view 180 degrees and it’s hardly any kind of improvement. 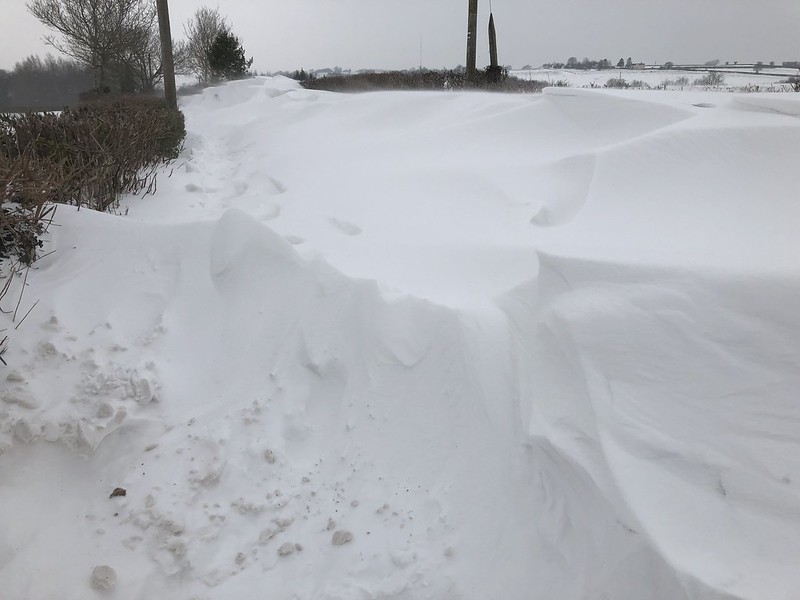 Our house nestles in a shallow bowl at river altitude with three exits to – however close Ross approximates to – civilisation. The one right there, a farm track masquerading as an official thoroughfare climbing fifty metres in less than a mile, or a final conduit to something deserving of road marking which is even steeper.

After 36 hours of snow driven on by relentless winds, we emerged to beautiful cornices sculptured by nature and an acceptance that snow ploughs happen only to tax payers not marooned in a tiny hamlet. 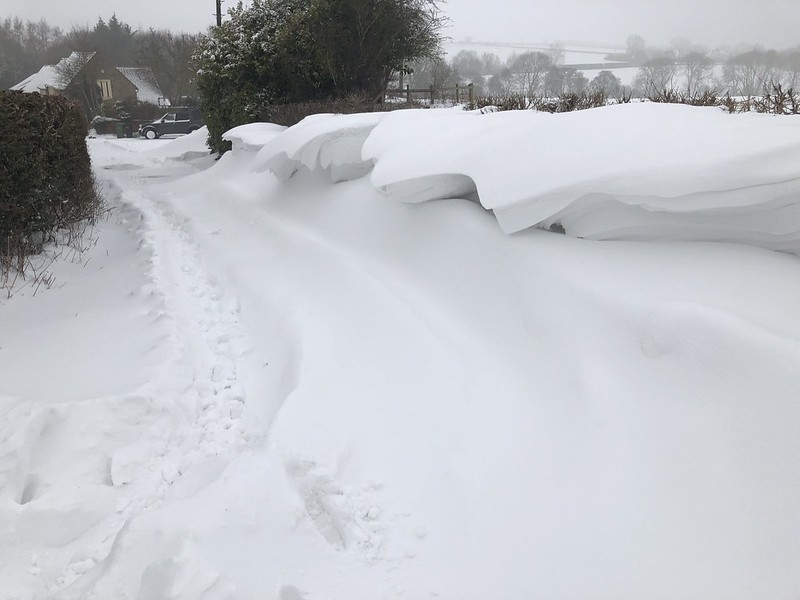 This is why I bought a 4×4 when we moved here. It’s still not entirely clear to me why I sold it. A replacement of sorts lies behind the door to the shedofdreams(tm), itself garrisoned by drifting snow requiring much grumpy shovelling to breach. 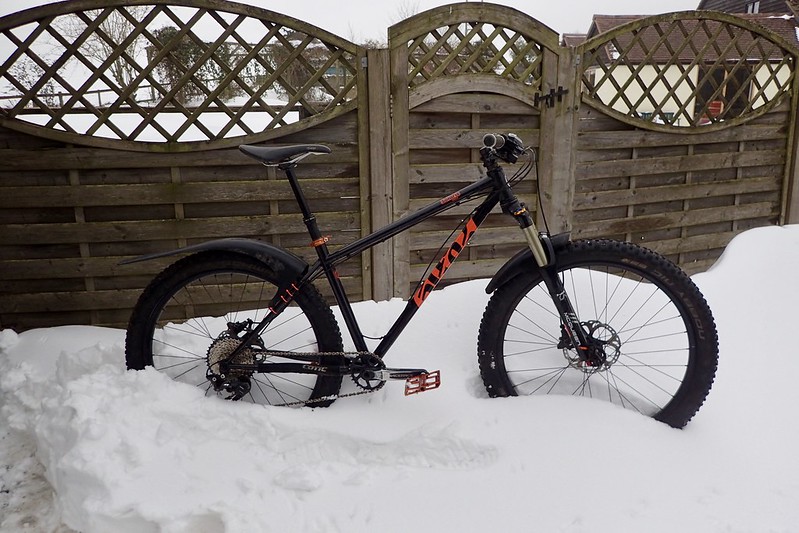 Provision wise things were looking promising; human fuel, heating fuel, backup heating fuel in the form of seasoned logs, and a fridge full of beer for emergencies and breakfast.

Physically tho we were pretty much stuck. Working internet though reached out beyond these four walls and told of the standard hyperbole and stupidity triggered by the first #snowmageddon hashtag.

You know the sort of thing, revving cars going first backwards, then sideways then into some innocent parked car. Ecstatic sledge based kids being hauled up wintry slopes by “snow-day” parents . Cats being repurposed for the new winter sport of Feline Curling, and sad snowmen being the recipient of the carrot the salad bowl forgot.

Important stuff no doubt. But locally a far more serous problem presented itself. We’d run out of wine. Let me qualify that, I’d run out of wine – Carol barely drinks anything, on the grounds I’ve already exhausted most of her allowance, but occasionally fortifies herself with a 70s parody snowball. She has sufficient ingredients to last sometime into the next millennium, whereas I was bereft through what must be called out as piss poor planning.

Bike it is then. Sold the fatbike. See previous remark re: 4×4. Still we’re nothing if not chubby in 2018, so Jessies’*** bike was pulled from the rack along with clothing previously campaigned on freezing winter commutes. 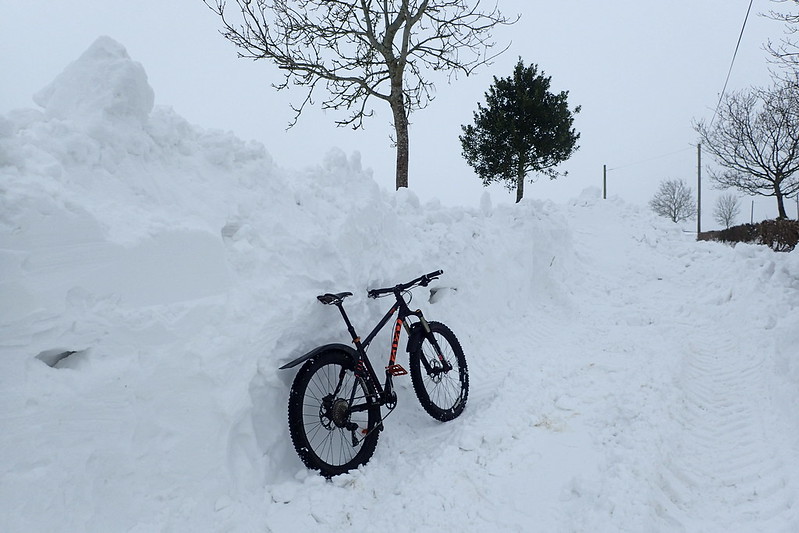 Things started well. Fab to be out on a bike. Passing tractors created grippy wheel ruts, so we headed up the steepest hill on the simple grounds it wasn’t the main road. Yeah that was apparently clear, but where’s the fun in that? 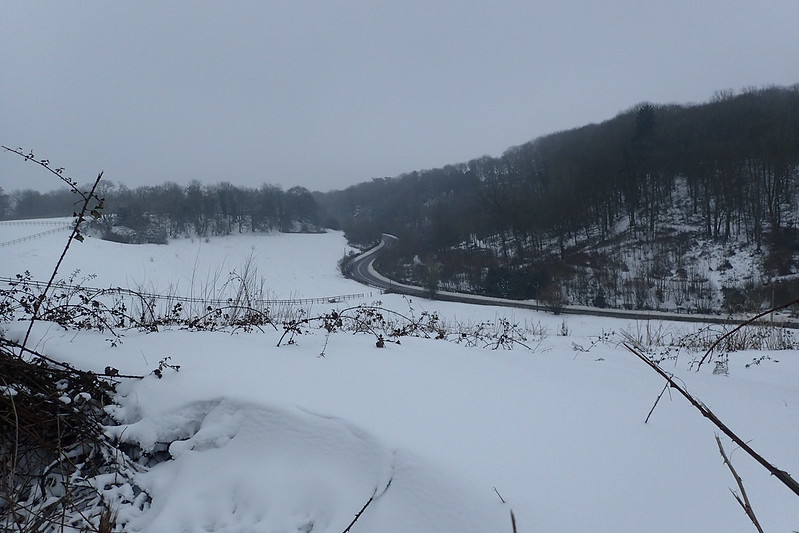 Fun soon turned to slog as the snow deepened to the point where even farm machinery cannot go. Brilliant I thought, just me and the snow, no one else has been up here, how cool is that?

Pretty bloody cool when you’re up to your armpits in it with the bike over your head. 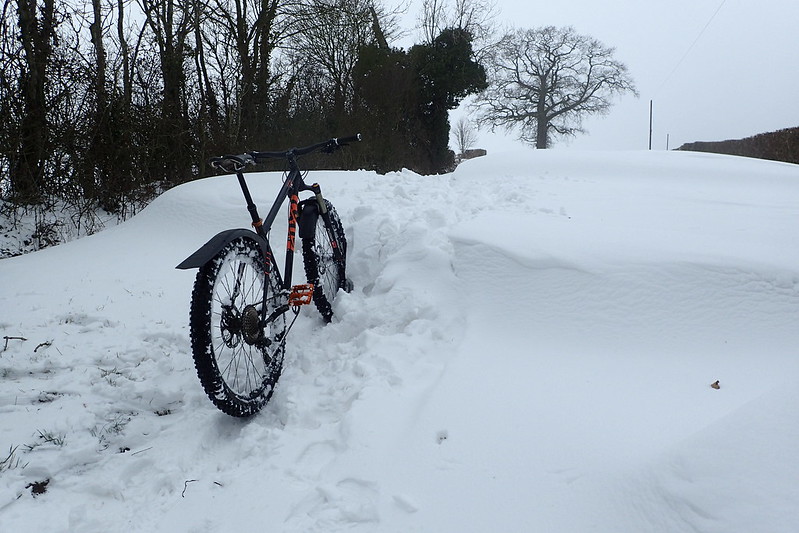 A selfie in those circumstances would likely have left me incapacitated in a location where the aforementioned moonshot represents the most practical rescue mission, so you’l have to take my word for it.

Along with the masterclass of grip management heading down the other side. Past the Cider mill when even I can gird a road bikes’ loins beyond 55kph. The steepness combined with freeze/thaw tractor ruts had the tyres keen to investigate the left and right margins of the road. Mostly at the same time.

It was mostly slips and giggles narrowly avoiding taking out upstanding members of the local community armed with snow shovels, and increasingly, terrified expressions as a tail sliding bandana wielding idiot sashayed by with a cheery “I’d stop and say hello if I could but.. oooooh fuck hedge, arrrrggghhh, saved it” 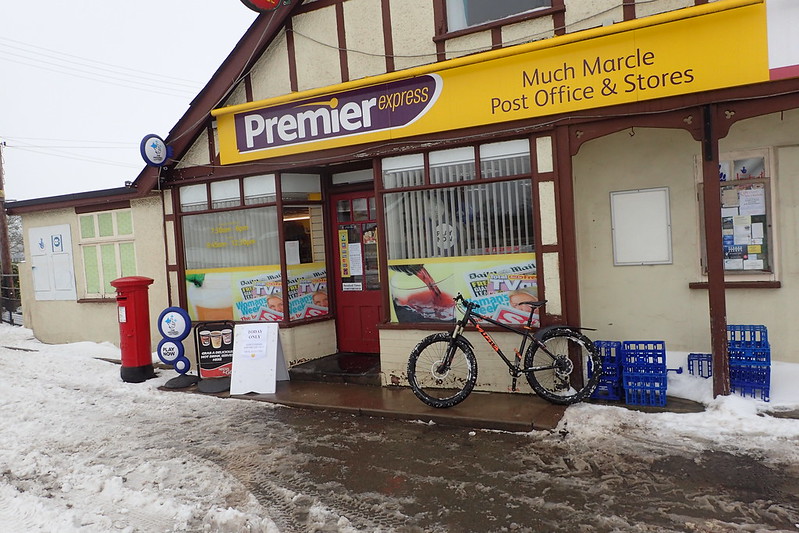 Doing my bit for neighbourly relations, I sympathised with those who’d trudged across the arctic wastes in search of a loaf of bead. Their search was to prove fruitless, whereas  my transactions in the village shop were more of the clink-y and chocolate-y sort.

Appropriately provisioned, I considered my navigational options. Back over the hill with evens odds of smashing bottles during intersects of steep and icy, or a 2 mile yomp on the main road with only a 25% chance of being wiped out by Mr I’ve got a 4×4 so 90 MPH is absolutely fine. 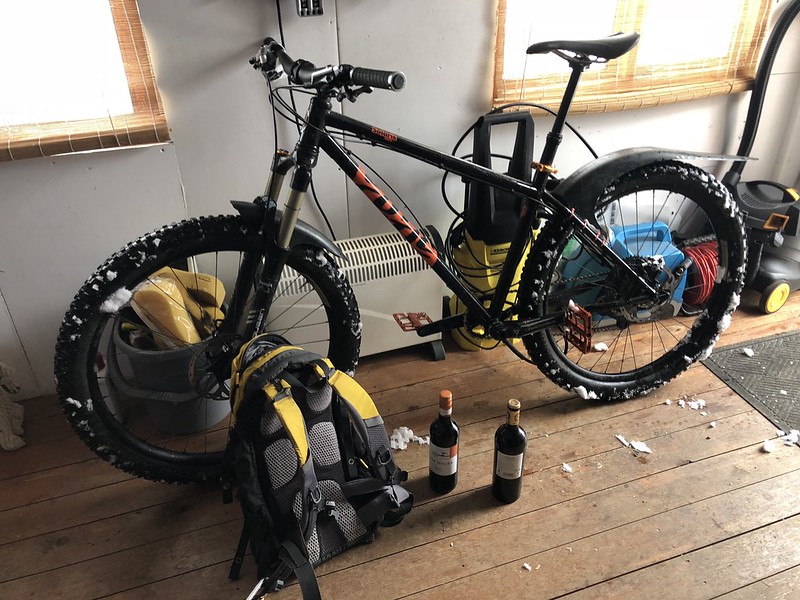 I chose wisely. Whummed down the main road on 12 PSI tyres and a bag full of moist grapes. Arrived home to find the local farmer had lobbed about 10 tons of deep lying snow into a field he didn’t own. Well that’s the pub conversation sorted for the next six months anyway.

Whereas tomorrow I’ll be aping the big mechanical scoop with some one person-power shovelling. Much as I loved riding my bike today, Swindon is probably a bit too much of an ask on Monday morning 😉

*I spent bloody ages thinking that up. If you’re not a student of the Fast and Furious franchise, that’s hardly my fault is it? I might start these blogs with a list of pre-reading 😉

**especially if youâ€™re the embarrassed owner of a real wheel drive car shod with ditch-finder tyres and an automatic gearbox.

***Sheâ€™s ridden it twice. Itâ€™s definitely hers. Iâ€™ve merely tested it for safety on the other 24 rides.