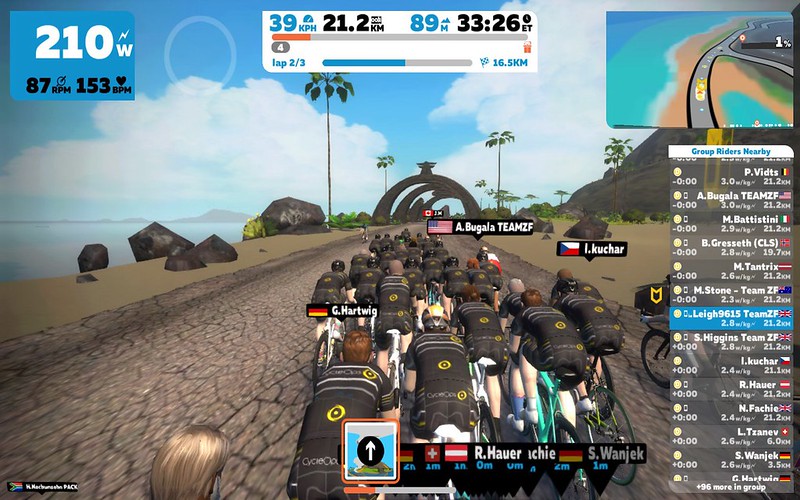 Way back in 2004 I contracted a fatal lung disease*. Other than some rather scary chest x-rays and a valiant attempt to break the world record for phlegm output, the major side effect was six weeks of shed based misery.

Outside messed up my insides. The intersection of cold air and asthma scarred lungs triggered chest heaving coughs, chronic shortness of breath and the aforementioned phlegm deposits. I retired hurt to the garden where my unused cross bike** was shackled to the modern day torture marketed as a mechanical turbo trainer.

Those videos – and yes they were bought for real money on those new fangled compact discs – had production values slightly below the shittiest ever aerobics video. After a month you knew every exercise so, if breath allowed, responding  to the trainer enquiring if you were feeling the burn with a cheery ‘go fuck yourself‘.

I felt the burn alright. Felt the urge to set the whole bloody shed on fire. At least it’d all be over without the impossibly enthusiastic host patronising me one last time with ‘step it up, rememberno pain means no gain’.

Roll forward nearly fifteen years and here we are again. The FrankenAnkle is at least six weeks away from interacting with a proper bicycle. With my lackadaisical attitude to healthy eating, the emergency services will be winching my 300lb corpulent carcass out of the house, unless some form of exercise can be crowbarred into a 45 day cheese’n’port marathon.

The world has moved on. Virtual cycling worlds are peopled by second-lifedropouts sporting the latest in smart trainers. Bluetooth, wireless and – I’m guessing – dark sorcery connect the three together through the simple expedient of splashing cash on self assembly*** plastics containing electro magnets and a subscription to what I’ve come to think of as ‘Ego by Roadie’

After an initial – and frankly confusing – toe dip into the world of watts, cadence and internet testosterone, I joined a group ride through the medium of social media and abandonment of common dignity. The start line was awash with pixelated road riders differentiated by frames, wheels, haircuts, socks and glasses. It was a bit creepy to be honest especially once the 1984-esque instructions were splashed across my screen.

None of which I understood mainly because they talked about pace, beacons, packs and drafting – all concepts in which I cherish my ignorance. And a little bit due to the distraction of coercing the varied communication signals into a tiny receiver. So the start caught me by surprise, as two hundred electronic souls barged me from the rear responding to the bark of ‘2.4 W/KG for the warm up‘

Right whatever. Sounds painful. It was as well attempting to breach that gap to the back of the pack. My pleasure at not being quite last was cut short by a total confusion of what to do next. My drafting skills were precisely zero. Since that day I’ve upgraded them to bloody useless.

Key issue is the communication lag between what you see on the screen and what’s happening in the real world. The feedback is clever; hills make you work harder, drafting easier, pedal harder to move through the pack, coast and go backwards. Works brilliantly if you can synchronise the five second gap between the two.

Took me a while – oh let’s be generous and call it an hour – to fully comprehend that. In those sixty minutes, my desperation not to be dropped would see me burst out in front of the group, only to be spat right out the back as I panicked and forgot to pedal. Once when I saw the road ahead populated by only a single rider, my attempts to chase him down were dashed.

The harder I tried, the faster he went. Eventually it dawned on me that some desperate prodding of the keyboard had changed the camera angle and I was, in fact, chasing myself. Things didn’t really improve from there.

I really, REALLY, want to be properly snooty about those who take actual pleasure from this shed based purgatory. It’s mental – attempting to beat people you’ve never met. Like Strava with moving pictures. It’s a long run from fun and a decent bike ride from compelling.

Except in the five days since cautiously poking my nose into this virtual world, I’ve ‘ridden‘ 125km, gone stats-geek native and -it pains me greatly to say this-actually passed an hour in a group ride without feeling the urge to smash the whole thing up with a hammer.

Once the ankle is cleared for proper riding though, the setup will atrophy as befits a pale imitation of the real thing. In the meantime tho, come tomorrow, Bob5499 is toast.

If you’ve go this far, you might enjoy a more coherent article on injury, indoor trainers and the injustices of both in the nextCranked Magazinedue out early Feb.

*on reflection, it wasn’t quite as serious as my initial diagnosis. Goes to prove the medical professionals, friends and family were rather more accurate with their identification of ‘hypochondria‘

**Bought two more since. Same result. Which makes me either stubborn or stupid. It’s stupid isn’t it?

***self assembly yes. Intuitive no. Without Carol I’m pretty sure the only exercise I’d have managed would have been gleefully taking a fire axe to the thing.