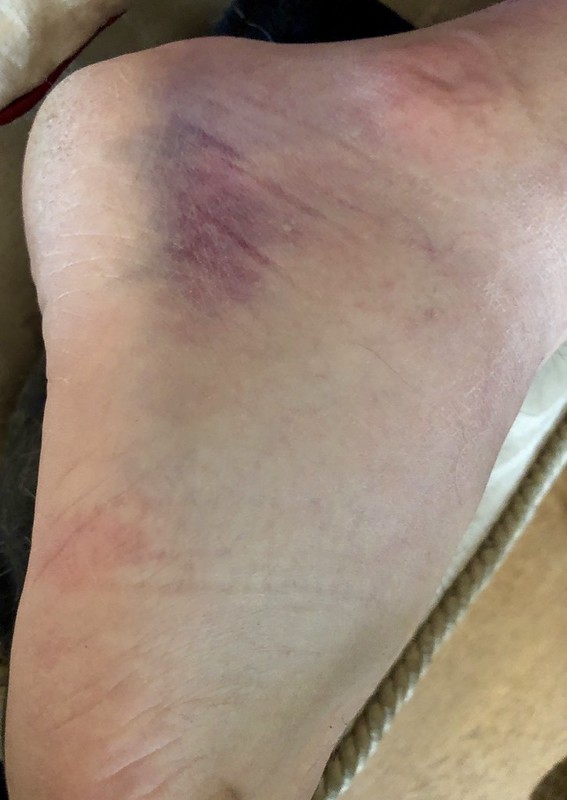 There are a collection of noises you wish remained silent. Clustered around aural stimuli triggering involuntary gasps, cries of pain and classic anglo Saxon verbiage rhythmically assembled around the extensive use of the word ‘fuck‘.

Instant awakening to a night creak on the stair, dread comprehension of a car/immovable scenery interface and the sound of ligaments tearing themselves from their biomechanical norms.

What a noise that is. Somewhere between the creaking of a Man-of-War tortured under full sail and the snap of a door slamming. Other senses tumble in; the sharp flash of pain, the smell of the earth rising towards your stumbling frame, the view of the world going sideways.

It’s gone sideways alright. In more ways than one. And while this extends barely past a second of misjudgement, the story starts some ten days before. A happier time when an uninjured Al ran 15 kilometres at a pace that’d easily meet the goal of a sub two hour half marathon. After which the whole ridiculous enterprise, of a fifty year old man pretending there were still athletic achievements worth striving for, could be firmly shut down and never spoken of again.

Riding bikes – people who fail the risk/reward test say – must be dangerous. Well yes and no. Yes because the chance of physics and geography coming together in a bone crushing manner tends to the probable, but no as that’s mitigated by the experience of twenty years gaining adequate skill to avoid doing so.

Running though is essentially Russian roulette with no empty chambers. Metabolising diesel fumes in the traffic offers a similar level of serious injury as lying in front of it may provide. There’s a one to one correlation between my last two runs and the number of limbs seriously compromised.

Firstly that 15km had consequences; the visible one being a pathetic limp when my left knee took umbrage at ground pounding, so striking out in a slightly different direction to the rest of the leg. I’m not a medical man but I’ll do my best to describe it. Scrape-y – each step sanding a little off the wonky bit of my patella.

A weeks recuperation based entirely on a Christmas cheese and wine diet failed to ease the abrasion, so my long suffering physio was called in to deal with this latest incident of hypochondria. The summary of that diagnosis was ‘being old but not wise enough to stretch properly‘ and a caveated green light to go and try again.

Rather than risk a further ninety minutes of asphalt percussion, I collected my proper running mate Ian and his ridiculously rapid tiny mutt in an eight legged assault of the lower slopes of Penyard woods. Woods that have been the subject of brutal logging leaving a barren landscape of ankle deep mud and fallen trees.

The latter represented my nemesis. The former merely pissed me off for the 40 minutes or so of us making slow progress* on flooded trails abruptly terminated by felled trees and trench like double track. We headed away from the arboreal carnage choosing instead some choice singletrack laced with happy two wheeled memories.

Not anymore. Now when I think of this trail it contracts my inside as synapses zap dendrites taking me right back there and THAT noise. The one following a stumble over a fallen log, a desperate attempt to stabilise a falling body, a moment of disentoriationas my head torch illuminated first the ground and then the stars, followed inevitably with my entire weight rolling my right ankle to ninety degrees.

I wasn’t going to run this off. But I had to try as the option was to give up, limp to the road and wait for Ian to fetch me back. He’d have been fine with it, I really wasn’t and the bloody dog was giving me the eye. So we jogged gently home, I grabbed a bag of ice and a box of Ibuprofen and some internet self diagnosis.

Really not required. When your frankenankle(tm) is the size of a grapefruit and you can barely get a sock over it, it’s probably reasonably to assume bad things have happened. Not quite sure what. The full horror will be revealed when my on-speedial-physio can do a proper evaluation once the swelling subsides.

Until then the best case scenario suggests 2-4 weeks. The worse case one… well let’s not go there as that suggests riding bikes in Spring might be happening to other people.

What it definitely means is no half marathon for me next week. I’m genuinely pissed off because a) I was on course to be on the course for less than 2 hours and b) I’ll have to carry on bloody risking injury to run the same race sometime in April.

I could just give up. It’s not like I don’t have form here. Not going to happen. For a few moments in the last two months I’ve genuinely enjoyed making progress by foot. And I’ll be buggered if all the horrible bits interspersing those flashes of a runners high won’t count for something.

Whatever. That’s for later. Right now I’m reflecting on what a stupid bloody idea it was to give up drinking this month.

*that’s pretty much my running pace. Ian could easily lap me at least once but is far too good a mate to even suggest it. His bloody dog looks keen tho.

4 thoughts on “Running out of time”