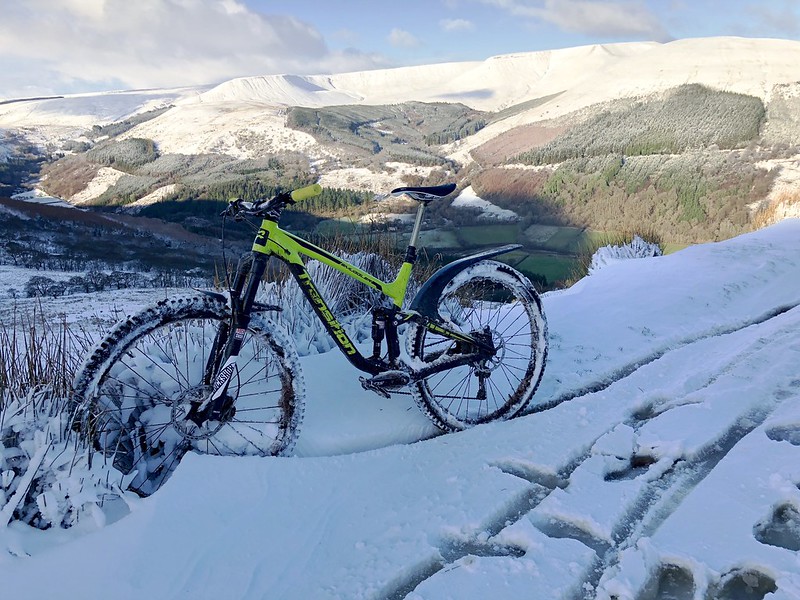 Tradition is an odd concept when you think about it. It decomposes into repeating the same things yet somehow expecting a different outcome. Which is a rather better definition for insanity.

Examples abound; this is the year we pack unstable family relationships into a tight box, ignite the blue touch paper with alcohol and by some miracle nothing shall explode*. Further there is no possibility I shall emerge from these ten days more than 1 kg heavier despite eating my own body weight in cheese washed down with tasty toxins. Finally the fragile purity of my resolutions shall not shatter under the weight of dark, frozen January misery.

That’s pretty much covered off the joy of Christmas so let’s move onto some real food for the soul** The therapy/drinking group cleverly disguised as a loose association of mountain bike riders mark the holidays with a ride up and over a Welsh mountain. While the route and the date never change, who actually turns up is a little more random based on availability, prevailing weather conditions, level of apathy and – in the case of one particular chap – the ability to function whilst under the spell of a crippling hangover.

We’ve been here before. Tradition dictates we shall go there again. It’s like bloody groundhog day with less amusing marsupial and more stumbling idiot. Learning at least a little from last years debacle, my bag was fully packed and triple checked a whole day before. Ensuring my performance – while still wholly pitiful – would not be degraded due to a lack of the proper equipment.

Aside from my body. Which has the misfortune to host my brain. An organ that cannot look at a six bottle wine rack without considering it some kind of personal challenge. Although first it needs to warm up with a couple of beers, and some kind of donkey stunning cocktail, before a one man bacchanalian assault on all things liquid grape.

Not quite one man. Matt and Lauren kept me company, but only I was able to entertain everyone in the room with a repeated stumble over an obviously placed obstacle when making room for more poison became a biological necessity.

As the world swam out of focus, some malicious bastard added gin to it. In quantities that would have transitioned that donkey from stunned to dead. Through years of rigorous practical study, I avoided any such fate instead retiring to bed at around 7pm, once I’d established which flight of stairs might be the real one.

The next morning we went riding. It was epic. A proper death march. Which considering I couldn’t operate a tooth brush at 7am is something I’m somewhat surprised I physically survived. Mentally though I’m a little tougher than I pretend so neshing out was never a remote possibility, although being violently ill in the van was my constant companion as we ascended into increasingly snowy landscapes.

Days like these aren’t about the riding. They are about the memories. The healing process kick-started by my three compatriots incessantly ripping the piss. Then staring at the glass-still reservoir under white-dusted hills on the first climb. Noting the increasing snow depth as we climbed higher. Playing the game of riding on partially solid ice without crashing through.

And then onward through metre high snow drifts where bikes were going to be nothing more than an annoying accessory. Until they weren’t which is pretty much when the crashing started. A 15 minute moorland yomp was transformed into a nearly an hour and a half of pathfinding, falling over in the snow, permanent laughing and wondering when it might be going dark.

The conditions didn’t improve much. They changed from deep snow to sloppy chop to hard ice. Our response was the same- ride what you can, walk the rest. Concluding in arse-sliding down the descent from the gap desperately hanging onto difficultly shaped bicycles. Even when remounting became an option, it was still mildly hairy. Especially if you were still mostly drunk.

By the time we hit the road – still with nearly 10km to go – the frozen four were suffering from ice-block feet and finger numbness. Which made the last 30 minutes chain ganging the canal path fairly unpleasant. Mainly as the path was more water than anything else so firing barely liquid moisture at sodden shoes.

What else do I remember? The aforementioned slide down a steep trail being made just a little more exciting when Haydn and – more worryingly – Hadyn’s spiky bike just failing to remove one of my vital organs. I called an impromptu meeting of the death march committee to declare it a solid 8, with a consideration for a further half point if anyone actually contacted frostbite.

No one did. I know this for sure as the four of us joined another twenty for food later. An event where drink was also served – even to a man who had made the rash statement. some twelve hours earlier, that he had given it up for life.

*arguably that’s a safer bet than the whole virgin birth/sky fairy thing but we’ve been there before and I’ve nothing else to say on the matter. Other than REALLY?

**did I eat that? Probably. I ate almost everything else.

***stolen off facecloth. It’s got to be good for something.