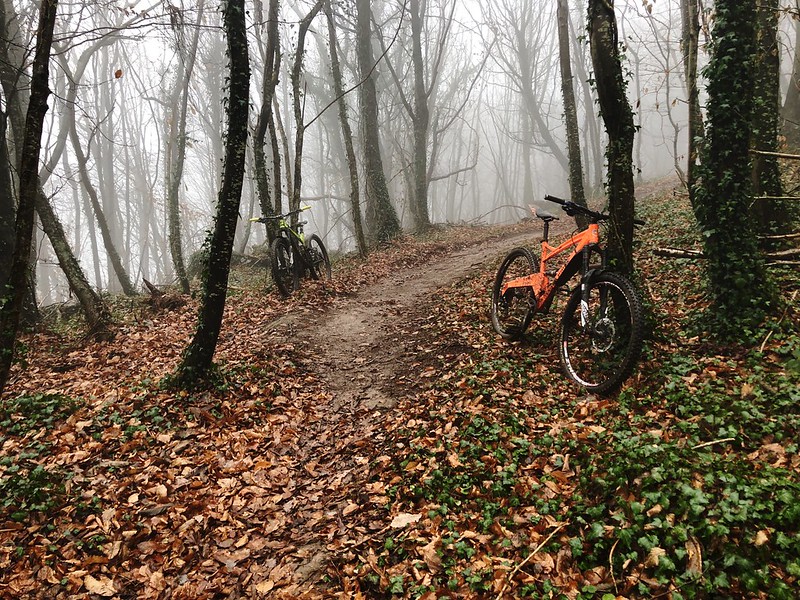 Perfection is a problem. Digital content assaults us from all sides. It flicks every channel to remind us how rubbish we ordinary people are. And yet we cannot escape the images propagated by our minds eye suggesting that, while we might not be perfect, awesome is respectable second place.

Reality blunts that vision. It’s the main reason I hide behind the camera to make by betters appear, well, better. Location, angles and composition intersect to enhance that flawed reality into something superior. Whenever I find myself on the wrong side of the lens, the gap between perception and electronic imprint is somewhere between a bit disappointing and deeply embarrassing.

Somehow the image in my head transposes to a bloke recently introduced to the sport of mountain biking and – further – he appears to be method acting a homage to ‘crouching badger, hidden terror‘. Over the years, I’ve reconciled myself to being the bridesmaid rather than the bride. Or – to stray into rarely considered accuracy – the drunk lying amongst the gravestones desperate for someone to notice him.

I do get noticed. For all the wrong reasons. December has been a total bastard in terms of other peoples deadlines. Normally I’m with the late, great Douglas Adams who enjoyed the sound of such things whizzing past his head as he takes cover under a desk. Not so this time around with a fading 2017 colliding with stuffthat really must be done.

So I did it. Long days. Much grumpiness. Finally freed from wresting 5000 words into some kind of coherent whole, I hit send, the bottle and trails of slick mud I’d last ridden under dry November skies. I was so desperate to ride the incessant rain keeping me awake last night in no way stayed my enthusiasm.

Here’s what I didn’t know. Trails on the glass side of slippy are proper tests of the four season mountain biker. Committing a great tyre to the turn is a perfect metaphor for ‘up front for dancing, back there for partying’. Drifting on slick leaves doesn’t feel much less fun than railing hard summer dirt.

Glad to be out basically. Missed riding my bike. I wasn’t alone as four riders – line astern – giggled their way through the last few turns of a trail we’d just excited. I didn’t recognise them but that’s fine as they identified me through a DNA back-scatter of pattern recognition.

“Hey Al‘ they called. ‘I’d recognise that pedalling style anywhere‘. Polite enough not to add further description but in my head I’m hearing ‘Shaved pedal mashing gibbon barely able to maintain forward momentum‘. And let’s remember these are my friends. Slings and arrow of outrageousfortune and all that.

We bantered. I accused then of abandoning their glacial sponge of the Malvern hills to ruin our mud, and they countered with a view that those hills were full of trails straight cut to A&E, and further infested with the rambling class who are oh-so-supportive of mountain bikers.

Whatever. I’d pay good money to be tagged by my riding peers for superb downhill posture, a cornering masterclass or a jumping guru. Unlikely since every time a picture paints a thousand words, those words would suggest a man who is somewhat beyond mildly perturbed, possibly due to the distraction of interacting with a bicycle in what appears to be a first time meeting or a fight.

I blame my gibbon like proportions. Others less kind would suggest a demonstrable lack of technique, a stance favouring the back wheel or an expression suggesting one may have just followed through. I’ve seen the photos and it’s hard to argue with almost any of that.

Even so. Being identified by your wonky pedalling style feels akin to placing third in a knobbly knees contest, or winning the right to be considered the best thing to come out of Lancashire. Faint praise to be damned with.

With dignity being a thing that happens to other people, I was able to internalise the ignominy and crack on building a belief system around the awesomeness of my front tyre. Which worked brilliantly right up to the point of dropping into a mud gully, making aspirational assumptions around the grip of polished roots and ending up lying upside down under my bike.

That is what I consider my ‘best side’. I’m easily identifiable when lying supine wondering aloud if some kind of mud-bunny has wrested traction from my front wheel. It’s not a new experience, so I was happy to milk it before slithering darkly down the remainder of the trail.

Which was nothing less than fabulous. It’s a whole lot slower than summer but no less engaging. Sure I’ll be sick of it come March, but right now having not ridden much in the last month reminds me why I need to ride a whole lot more in the next two.

You’ll find me pedalling wonkily with a big grin on my face.