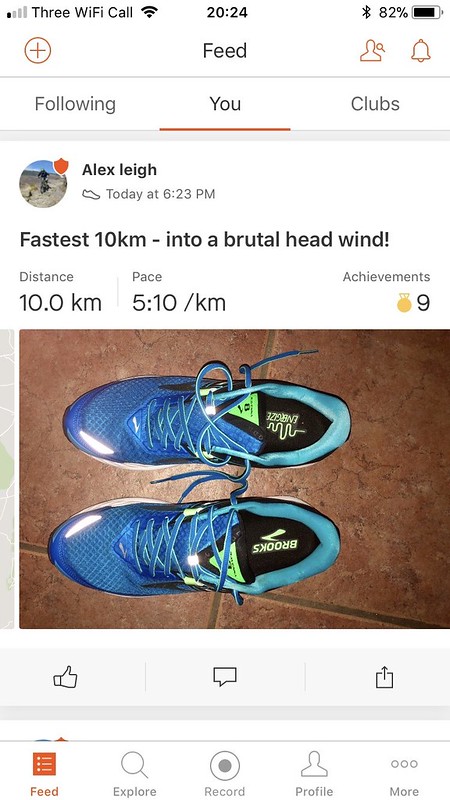 ….. which best summarises my thoughts on viewing video of my tragic middle aged jogging. Third time I’d been ejected from the treadmill into the orbit of a lovely fella, who promised the application of running technology – and a splash of cash – could magically upgrade my running style to something beyond its current incarnation as an ‘amateur pantomime hack milking the scene where he’d just been shot in the back’

We were lucky to get this far. Well I was certainly after peering through the product festooned window of the local running shop with dread in my heart. Sure any vestige of dignity was exhausted many years ago, but it still required an effort of will and a muttered ‘fuck it, it’s just a shop’ to get me through the door. I mean someone was going to start laughing very soon and it probably wasn’t going to be me.

No danger of that as the amusingly shonky treadmill accelerated from 0 to 8 MPH at a velocity that’d shame a mid sized sports car. Thirty seconds later my flailing limbs faced the opposite challenge of a stop sequence best thought of as smashing head first into a wall.

All of which was more dignified than viewing the video of my gait. ‘Ah what you have here sir is a classic case of over-pronation‘ soothed the man knee deep in expensive running slippers. He’s the expert, but to me it appeared a triumph of biomechanics not to have catastrophically tripped over my own feet. Each stride ignored any forward motion- instead converting that effort into kicking myself in the opposite butt cheek.

It wasn’t pretty. Three pairs of increasingly othopedic footwear sabilised the image past the point of me caring how much the bloody things cost. Just don’t put me back on that rocket powered treadmill or present another video of my big arse. We parted happily – him with a chunk of cash, me with a pair of something that may once have been called shoes before the marketing thugs beat up on it.

They have DNA’*, blown foam** and a 10mm midsole drop apparently all in the pursuit of responsive cushioning, quick transitions and the ability to launch into low earth orbit. Only one of those things isn’t true. Well not written down on the instructions accompaning the shoe. Yes indeed we live in a world where shoes need instructions, What a time to be alive.

Clearly all total marketing bollocks. I was especially keen to prove that hypothesis after their sniffy response to my current choice of running footwear. There was much blowing through hipster beards, some pointing, the occasional pointed question mostly answered ‘I like the colour’ and ‘they were bloody cheap’,

What we need here is a race. Marketing V Me. Emperor wearing no clothes V me wrapped tight in appropriate gear to repel the 40 KMH winds and fat rain joining us for a run. Which greeted my proper running mate Ian and I as we tacked away from his front door.

I can deal with the fact Ian is a way better runner than me. He’s younger, way more athletic, has actually run some proper races, and has insufficient body fat to allow his fatter mate to get a decent draft. What I struggled with was his tiny dog clearly modelled on a mouldy bog brush, with barely finger long legs, also showing me a clean pair of heels.

Splashing through a wild night*** Ian was comfortably maintaining a decent pace and an untroubled conversation, while I was acting as a human turbine sucking in wet gusts and blowing them out of my arse.

The remaining 51 minutes and 42 seconds are mostly lost to middle aged memory and expensive therapy, other than the encouragement of my fellow lunatic and that bloody dog giving me a ‘is that all you’ve got fatboy? Man that’s lame‘ look every time I staggered dangerously.

Lame is nearly where I ended up after some fucked up atmospheric mechanics matched that headwind to our every turn. The last 2km were particularly unpleasant where my conversational contributions were mostly grunts interspersed with ‘fucking hell, is this ever going to end?‘

It ended eventually. Some 2 minutes faster than I’ve ever run 10km before. 5 minutes in I’d forgotten the shoes, but after a brief lie down in Ian’s kitchen I recalled my scepticism to the bullshit psuedo-science and suddenly didn’t feel quite so sure.

It didn’t really end there because today there were hill sprints which I’ll not dignify with a description other than bloody hateful, and an extended visit to my sports physio who declared I have the hamstrings of a 9 year old. In length, rather than flexibility.

57 days to the race. As ever I’m being pointlessly melodramatic. No change there. More worryingly I’m starting to relish the challenge. I’ve dumped beer in the week and salad into my pie’n’wine diet. I’m not massively missing night rides in the mud. My plan is to go full cold turkey Jan 1, so to just run myself into some kind of 2 hour form before the 21st.

After which I’m going to get properly shitfaced. The consequence of which is likely to be a very expensive bonfire of the stuff required to every consider contemplating anything so bloody stupid every again. I hope so anyway as there’s a nagging worry this running stuff may become become habitual.

We can’t have that. It’s even worse than being a roadie.

*Crick and Watson are rolling in their graves. Probably in the arc of a double helix if the universe has any sense of humour.

**Don’t google that. Not if you’re at work anyway.

*** Which triggered another expense. A bonkers clever light that comes with it’s own app. No really it does. I’ve no idea why either.