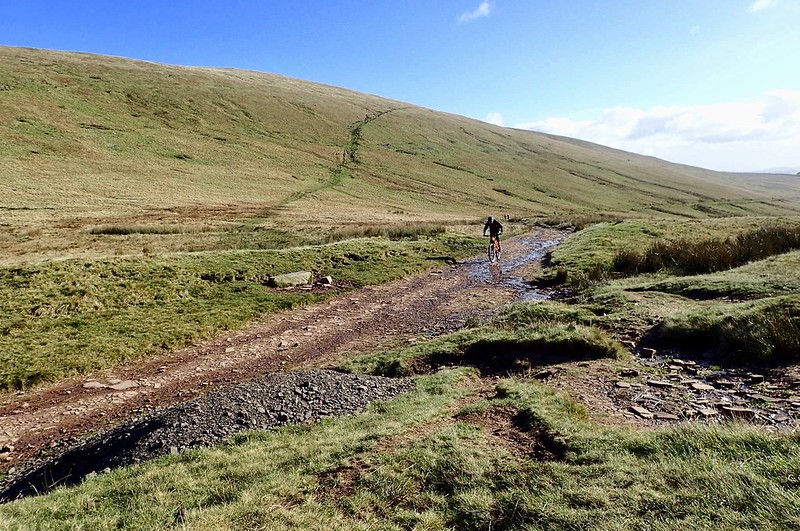 Oh smashing. Five months of perpetual darkness. Dark driving to work, dark driving home, with slashing rain carving up the few grey hours when the sun is allegedly above the horizon. Hidden by dirty clouds keen to pile on the misery.

Two options; hide under duvet with a hip flask or do that stiff upper lip British thing and live the lie there is no bad weather merely inappropriate amounts of alcohol*. Not today tho, the light may be short but we’re going long on a classic Wales loop.

Normally ridden the late December. For the last ten years or so it’s been fantastic/stunning/perilous/hypothermic in various combinations from a brilliant day out to an urgent booking with an expert treating advanced frostbite. Last year I tilted the odds towards probable death with a hangover sharp enough to shave with and a helmet value engineered by the lowest cost bidder.

Matt tells me his first proper mountain bike ride was on this very route many years ago when sleet, snow and possible benightment were served up on an epic day. This may explain his mild obsession with pushing any ride towards a death march.

No chance of that with double digit temps, clouds without rain and trails benefitting from a two weeks of conditions entirely un-TransCambrian. Riding with most of my favourite bunch of idiots means while we have faff, it’s familiar faff and we’re appropriately breakfasted, unloaded and ready to go by 10:30am.

First up a lazy 6km climb only notching 400m of ascent. My kind of thing – especially without even the smidge of a hangover and back on the 29er wheels of the Smuggler. It’s not a light bike but nevertheless a good climber, especially on the dry hardpack winching us past increasingly distant views to the reservoir. 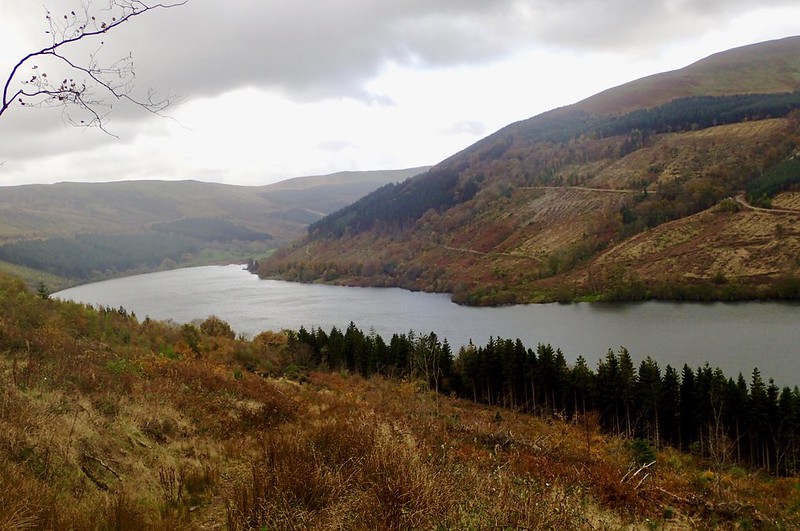 Still muddy on top. Before we got there, most of the crew cracked the code of a steep climb on slippy rock. My failure was entirely due to a poor choice of rear tyre, terrible line choice and questionable technique. Luckily there was a chance a little later with a second tough pitch to redeem myself. Cocked that one up as well. 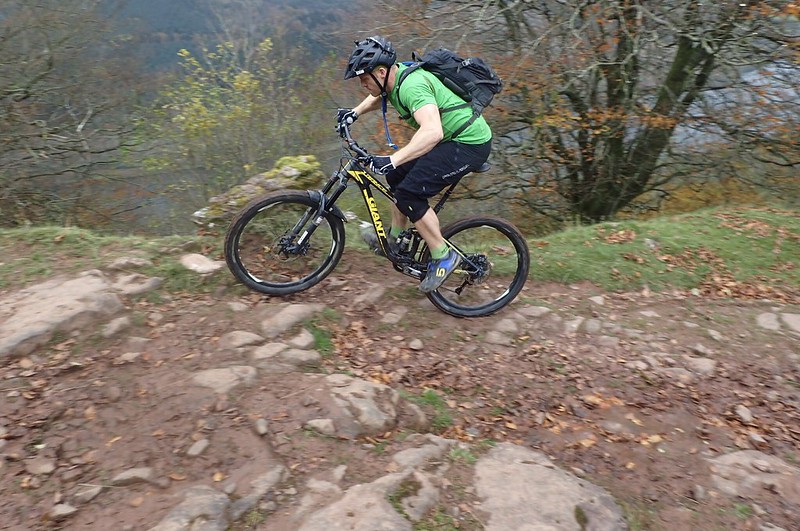 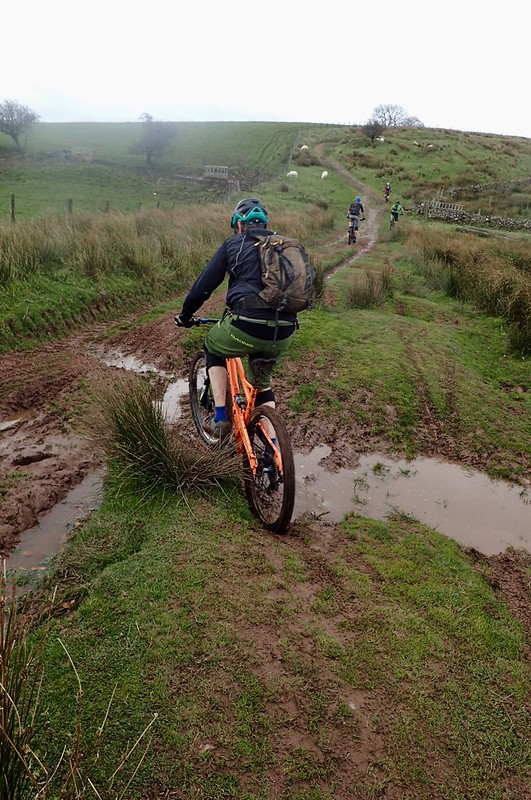 Mud navigated, we’re accelerating on that kind of trail where the rocks chase you down the hill. Or are fired on a personal trajectory by the bloke in front having far too much fun. 115mm of travel doesn’t sound like much for a modern mountain bike, but this wasn’t the thing holding me back. I don’t think we need to delve much deeper into the mystery of why ‘Al isn’t as fast as he’d like to me’. 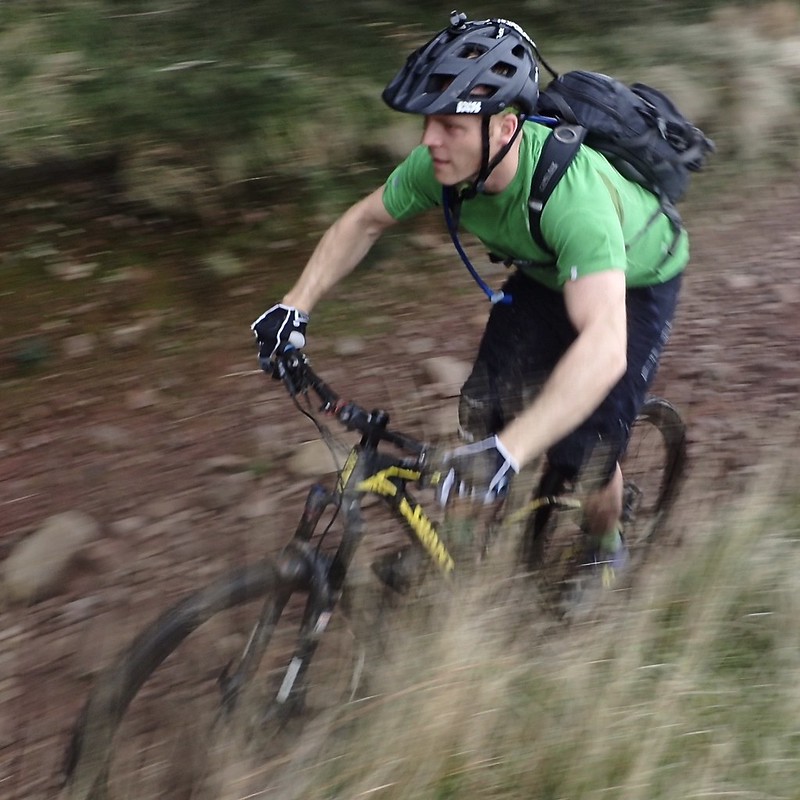 Fun, fun, fun – more so as I’ve ridden this route in shitty conditions. Which is a fine adjective for my co-riders attempting some kind of middle-aged TeleTubby parody during a brief stop for sandwiches.

A stop which provided sufficient time to see angry clouds rolling over the saddle some 250m above us. Best get on with it then. And while we’re riding in t-shirts, Wales still has rules – one of which is this climb is 20 minutes directly into a headwind. That wind pushed the clouds into the valley leaving broken blue skies over the summit. Can’t remember the last time I saw that.

We lingered. Warmed by Autumn sun and filing that view in optic nerves which never get tired of big mountain days. Until‘Right then, shall we?‘ broke the spell and it’s all suspension jiggery-pokery and battening down of body protection hatches.

As H was taking photos, I hung onto Matt’s back wheel following him off a frankly ridiculous line, before just hanging on as loose rock battered the bike from all directions. Speed really is your friend here even if feels like a fickle one. Suspension – both the bike and you – is optimally configured for free movement which grabbing a shitload of Shimano upsets in a way marked ‘over the bars/nil by mouth’.

We regrouped – waiting for Haydn – some of us more shaken than stirred but still with some fantastic descending to come. Firstly off the spine and into the fall line – done this 20+ times but it still is invigorating to the power of mild terror. I made mistakes, took crap lines, wasn’t as brave as I’d want to be, but memories of my mate Russ breaking his back here nearly 15 years ago still passes as an excuse. 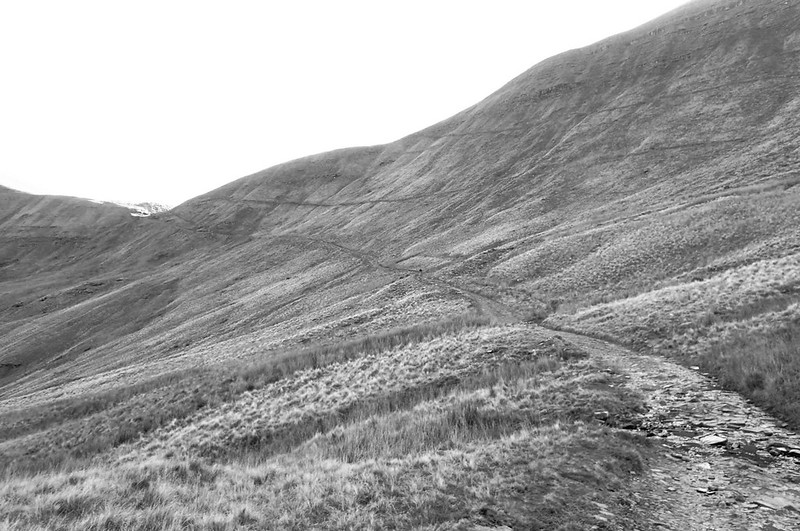 Then it’s giggling and pointing and fish-y hand movements, and we’re off again into a narrow gulley with diverting spine shaped rocks trapped between claustrophobic edges. This used to be properly hard but the bikes are so good now and my head is in that place where you can ride anything. Until you can’t. Stayed on the right side of that today.

Done. Finally a fast sunken singletrack ridden with all of the joy that swinging a sorted bike between bends as fast as you dare brings. Hitting the road, the van is still 5km distant from a canal towpath that’s muddy purgatory in December but today it’s firm, fast and bathed in sunshine. 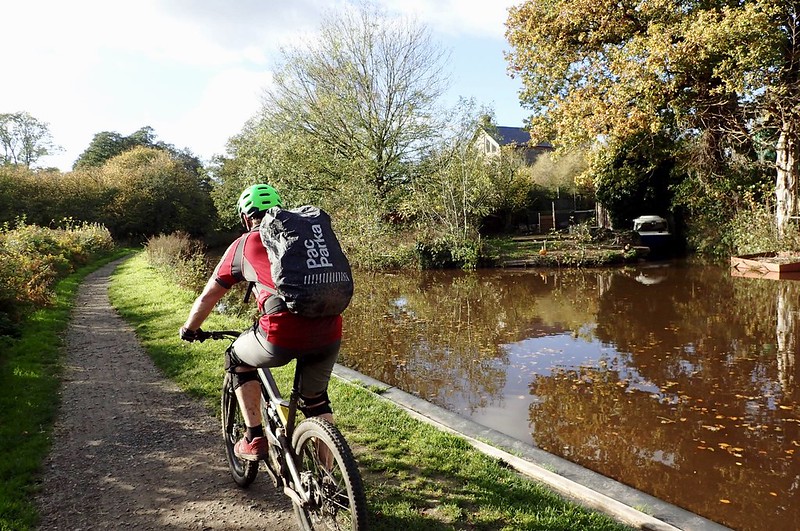 It could have only been better had Cez fallen into the water which was a distinct possibility when he misjudged the height of a bridge. Sadly he stayed dry on the outside giving us plenty of time to get wet on the inside.

This is a perfect day. Rationally I know it’s all going to shit on this side of the planet for the next few months. I don’t need many rides like this though to get through it.

Dark at 5? Is that the best you can do? We’ll be riding mountain bikes in proper mountains. There is pretty much nothing better than that.

*or trousers. But being a mountain bikers we’re rocking the four season shorts culture embedded in the sadistic schools of your youth.