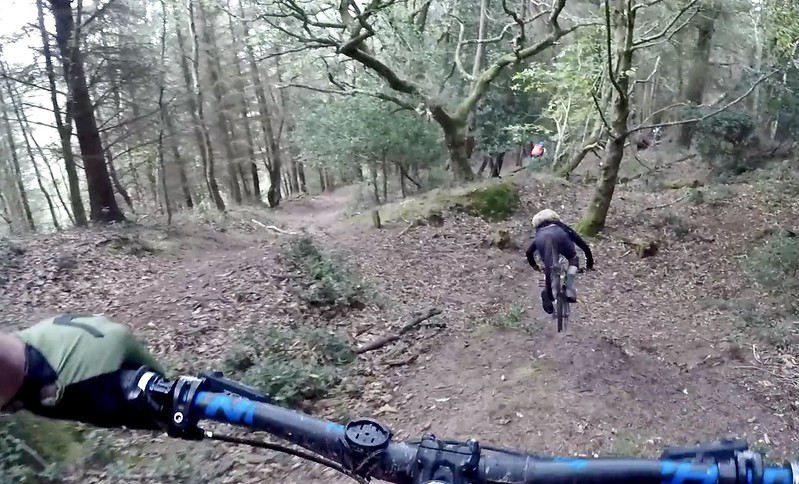 ‘that‘ being the classic front wheel burying itself in loam while the rear rockets skywards – its acceleration checked only by my arse, which was heading rapidly out of the danger zone leaving my face to take the impact.

It’d been coming to be honest. After the previous days drenching* in the Quantocks, making it this far without any major precipitation or trails mud carpeted from start to end was both a result and a relief.

This far being about 30 seconds from the end of a fantastic ride that’d started some five hours before. Our guides – Martin and Debs – arrived at the Ship Hotel in Porlock to find five hungry mountain bikers chowing down on a full English followed by yes-a-refill-would-be-lovely vat of fresh coffee.

They declined joining us for food which based on the first climb out of the town made a whole lot of sense. That breakfast represented merely a short term food rental as we inched upwards on a steep road gradient. Starting at sea level in a place surrounded mostly by cliffs tends to make the local geography painfully lumpy.

It continued that way. We quit the road but not the climbing before that first trail of the day does what it always does- especially when it’s fresh from rain and you’re trying not the be the crasher-in-chief in front of new friends. So kind of minced down hunting for grip and refusing to accept there was loads to be found.

Thankfully no more of that descending nonsense was on the the trail menu for the next 45 minutes. Up into a clearing and then up some more, then lots more and then a bit more to the track leading to Dunkery Beacon. The highest point on Exmoor, and frankly a bit of a bastard road climb that mocked your bacon and caffeine habit.

Lovely views off top. Fab descent to the bottom. Would have been more fab were it not quite so muddy. Still fun but my mind is still in summer so my hands grip the bars and brakes too tightly to properly enjoy it like the fast boys. Alex crashed but I was too far behind to see it. I blamed the new bike. It blamed me right back.

Clearly an Alex crash day as the faster one handed over the baton for the next descent which started well, dropping into a wooded chute boarded by high banks themselves ringed with tree roots. An ambitious line offered itself as a mud free alternative, and my smugness of taking it lasted exactly long enough for the front wheel to tap a damp root and viciously spin me sideways to point backwards up the trail. Still attached to the bike. There’s no branch of theoretical physics to explain exactly how that happened.

What happened next was a little more predictable what with the cultural icon of this lovely part of the country pretty much being the Scone**. Being a rebel I instead wolfed down a slice of carrot cake that was essentially the whole cake, before being stunned by the terrible news we were again at sea level.

Back up then. Took a while. There was a pleasant ride up the river bank followed by an slightly less pleasant push up a set of switchbacks acting as a calf burning gateway to something a little more in league with the freewheel. Granny’s trail apparently. No idea whose granny it was, but she must have been a heck of a mountain biker.

Fast, flowy, occasionally blind. The third facet not an ideal complement to the first two. Proper hip swinging fun tho with trees passing inches from the bars at 35kmh. It’d have looked superb from my new action cam has not Mr Stupid here accidentally switched it to time lapse. A feature clearly developed by someone who has never been outside.

Decision time. One more big climb for an awesome descent and the possibly of an end-of-summer ice cream, or a cheeky traverse of the moorland above Porlock before dropping into some sublime singletrack. Both sounded good, the second sounded easier and promised beer earlier so we went with that. Fantastic 360 degree views, tricky navigation of a 10 inch wide trail hedged in by robust heather, a fire-road crossing and then the good stuff to end.

Which is where we came in. And I came in to that bomb hole jump way too cautiously, far too slowly and under the idiotic notion it looked rollable. It was if the object rolling was the rider rather than the bike. For a horrible second it had that exit-via-the-front, hands-out, broken-collarbone vibe about it. In that second I shifted my arse so far back – good job it’s quite a big unit – the blameless bike stopped rotating to instead smash down onto the steep slope, at which point I decided the best course of action was to abandon ship.

Amusingly the camera caught the moment in the absurdity of the time lapse. 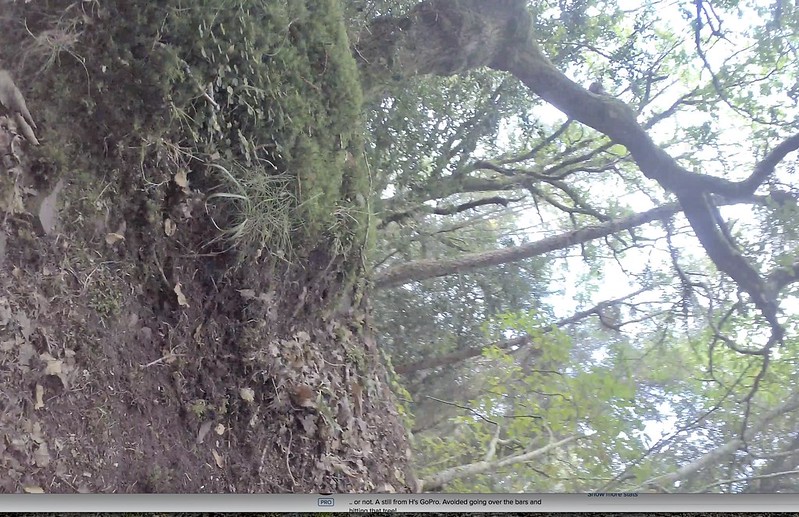 It didn’t really hurt. Well not as much as the piss taking which followed, and the repeated humiliation of watching it on slow-mo from Haydn’s GoPro.

I picked myself up, dusted myself down, got back on the bike and headed for the pub in order to consume vast quantities of local medication for both mental and physical anaesthetic.

Great place to ride tho. The next day was a different kind of fun. Especially as the crashing baton had again been handed on. Our next visit will likely coincide with the Porlock Weir-Fest beer festival. Three days of beer, bands and possibly some riding in the high summer of 2018.

Almost nothing could go wrong, Even so I’m packing an airbag.

*I am beginning to suspect that ‘Weather Event James‘ might have infected me with his where-I-ride-it-shall-piss-down curse.

**to rhyme with bone. Not gone. It’s not difficult and I do not understand how anyone can have a problem with it.