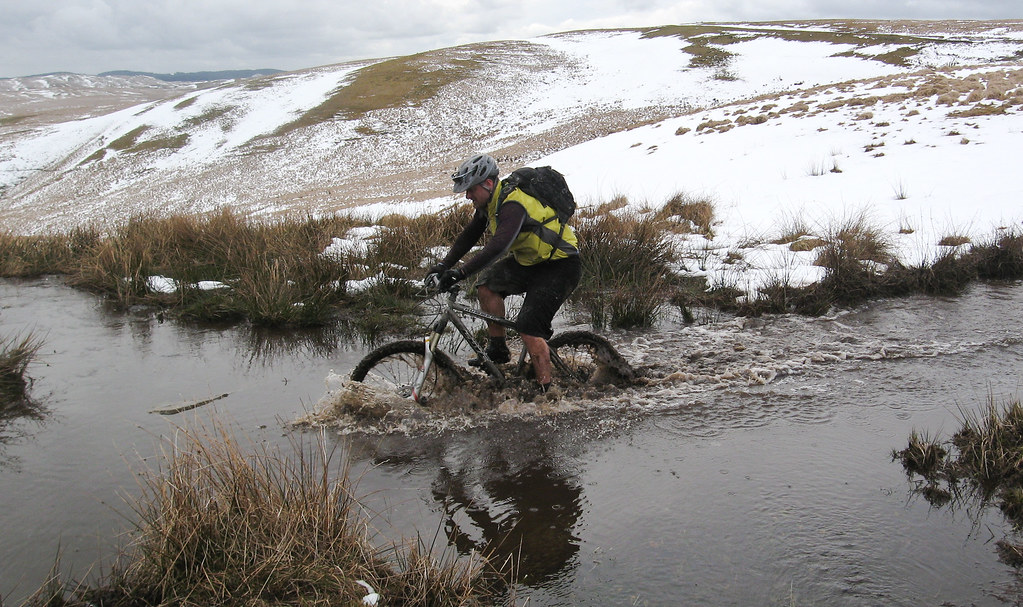 This photo brings back so many memories. Most of them accompanied by an involuntary shiver and a quick count of frost-nipped toes. An early spring day starting full of sunshine and enthusiasm but ending with grim relief and barely dodged hypothermia.

Seven years ago. Enough time passed for me to sign up to something both similar and a little more ambitious. This time tho I’ve handed over the guiding to a professional outfit promising all-weather routes, flawless logistics and fantastic riding finishing each day with hot and cold running beer.

It was a dark day in winter when my mate Adam pinged over the details of the Trans-Cambrian 3 day yomp starting in mid Wales and pretty much heading due north. Brilliant I thought; dog end of summer, a bit of autumn crisp under Indian-summer skies. I’ll be fit and raring to go for a mini epic before the tilting planet darkens our days and drowns our trails.

Reality is a bugger. I’m as uninjured as a 50 year old man with a dubious diet, significant beer habit and an old fashioned approach to any kind of preventative body maintenance can be. The itinerary speaks of three hard days with the middle one standing out in terms of distance and climbing. No issue with that; done a few of those, and my pre-ride preparation of two weeks of 12 hour days, the occasional libation and the remains of a Toblerone bar on my keyboard suggest I’m peaking at exactly the right time.

The weather tho. Looking for a positive, its not quite as unremittingly shit as previously forecasted- so bad the organiser was compelled to email out a stark warning that stout waterproofs, a stiff upper lip and at least county class breast stroke would likely be required on at least one day. And probably the next one assuming you hadn’t drowned/lost the will to live/called in the spousal support vehicle while publicly rubbing a ‘difficult‘ hamstring.

Now we’re just going to get wet. Leaving me a dilemma of bike choices; the new one shod with proper tyres hung between tubes which could hold a soupÃ§on of mud without shutting down forward movement. Or the ‘old’* one with none of those things but sporting a rather natty new XTR mech.

The right choice would have been the SolarisMax of course, tried and tested on 29er running gear and designed for Peak District conditions that have much in common with what we’re about to ride into**

Sadly I’d robbed that for parts so after some olympic class ditheration, I finally threw the Mojo3 in the car on the grounds the bearings could do with a change so I might as well destroy them completely. Also Adam thought it was a good idea, so already I have someone to blame.

And I might need too. As this is an organised trip, we’re joined with seven other riders. Never met the one of them My bingo card reads:nerds, straverists, friendless nut jobs with questionable personal hygiene, a man who has never fixed a puncture, someone who’s demanding if weâ€™re there, yet and a bloke with a map board.

That’s something to look forward too. It might take my mind off the weather assuming the possible lightening strikes stay away. Maybe that’s the subliminal reason I went with the 2.8 wide tyres.

Anything is going to be a relief tho after these last three weeks of work attempting to shove 40 days effort into 15 elapsed, writing neatly 20,000 words, proof reading about double that all the time attempting – metaphorically speaking – to wrestle an octopus into a string bag.

Bikes, big landscapes, nothing to do but ride, no email, no meetings, no more FUCKING PROOF READING, everything organised- sounds bloody brilliant. The last time that happened we were in Spain choking down dust on some of the best trails I’ve ever ridden.

Adam did crack a couple of ribs and I broke my hand, but otherwise it was fantastic. And mostly dry. Whatever, beats the hell out of sitting in front of this time stealer for one more second. And on that note, beer and packing. Probably in that order.

*six months old. In the shedofdreams(tm) that’s pretty much a cultural relic.