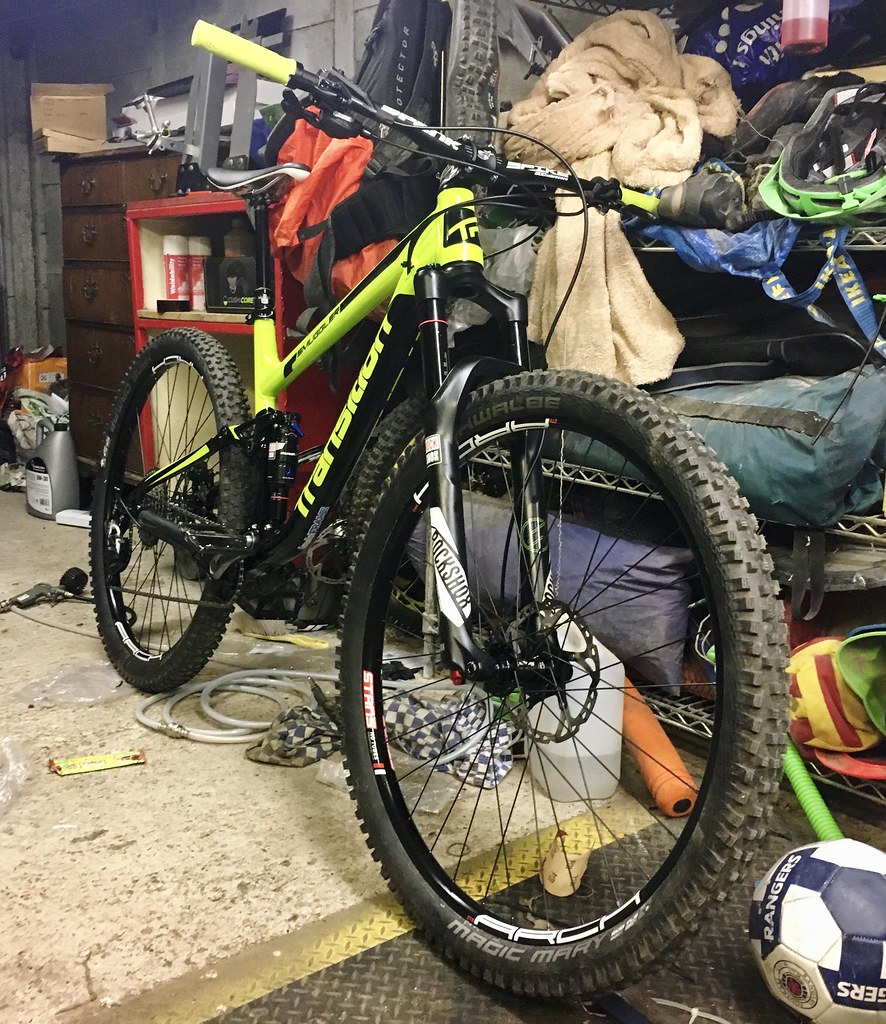 .. so there is no need to adjust your preconceptions. Soon to follow will be the tired lament of why new is better and how this latest wheeled trinket slots into a carefully curated fleet of what appears – to the less discerning observer – a quiver of very similar bicycles. We’ve been here before.

But first that garage. It’s not mine obviously. Far too much actual engineering going on when compared to the vanity project physicalising as the ShedOfDreams*. Matt’s rationale for the stacked detritus toppling dangerously on any flat service tells of a carefully indexed system where every tool is perfectly positioned for easy access. Based on how long we both spent hunting for the 3/8ths gripley and time-bending-quantum-laster tonight, I’m starting to suspect he might be fibbing.

Whatever, time to focus. I’ve been living that noun for a few months now. Discarding once cherished bikes, now distanced from daily driver to wall ornament by all the new and shiny passing through the revolving door of my rental fleet. Over 4000km on the Aeris didn’t save it from being not as good to ride as the Mojo3.

Then admitting Jessie’s new bike was at best something to be shared between us saw off the Stache, And the unpleasant return of the road bike left me in such an aesthetic funk, I couldn’t wait to move it on.

Three bikes sold. Beyond focus and into fiscal probity. At this rate the Mojo3 would almost be paid for. Clearly the wisdom and gravitas of entering my sixth decade** was ushering in an epoch of financial responsibility and bicycle austerity. I was down to my last four for Christ’s sake.

Logic suggested this was more than enough for a man with only two legs. Even when considered against a four-season strategy of riding bikes with proper tyres and sealed pivots come the return of the grim. Let the Mojo3 be brilliant in its operating envelope of Californian conditions, substituting Yorkshire grit when you personal autobiography reads ‘my life in the slop’

Ibis, Cotic Full Suss, Cotic Hardtail. Sorted. Pick a standard from the plethora of the latest offering so wheels – and more importantly tyres – can be switched between the three and settle in for a shit but smug winter. To that end I reinvested some of that sale cash in posh wheels and matching forks in the certain belief that – finally – what I held was what I wanted.

Logic will only take you so far. Longing takes you a little further. I’ve REALLY wanted a Smuggler – that’s what ^^ that is – since the launch back in 2015. For no other reason than they look a bloody good laugh. But so close to the FlareMax in travel and angles, it makes absolutely no sense whatsoever to sneak it into the shed under cover of darkness.

Let’s address that first. I did discuss it with Carol who took the news with a look of resigned resignation I’ve learned to recognise as tacit approval. My wanton slash and burn of the current fleet probably knocked her a bit off balance, and I half expected to receive a therapy voucher for my birthday.

Justification though still bites hard. On the credit side, it was cheap in the way high end mountain bike frames are only cheap to those who consider anything less than four figures being pretty much not worthy of interest. That’s just the frame of course but a slight lowering of standards snagged gears, brakes and ancillaries for something less than absolutely eye watering.

Spares and careful husbandry of existing parts supplied the rest and we’re away to Matt’s garage where many new bikes are forged. This after Carol and I had a marital disagreement over the best way to apply the hateful frame protection the night before. An argument that ended – somewhat predictably – in doing it her way because it didn’t involve smacking that pristine frame with a big hammer.

It wasn’t a difficult birth. Matt passed me a beer and asked me to stand well back from where the responsible adults were working. Stuff around internal cable routing, tricky chain lines and the potential for a major hydraulic explosion passed me by as I wondered why the hell I’d bought another bike.

No useful conclusions were reached. Instead I wrangled another beer before a dusky test ride suggested the Smuggler may be virtually only a few inches different to the FlareMax, but in the real world it’s bloody miles away.

Tomorrow will probably tell me quite how far. It may not be much and all of that might be in my head. It never stops being fun finding out tho.

*it’s basically a bar with a bunch of interesting stuff on the wall to talk about while quaffing a beer or five.

**however many times I write this, it still feels like a mealy mouthed metaphor for ‘HOW FUCKING OLD?”