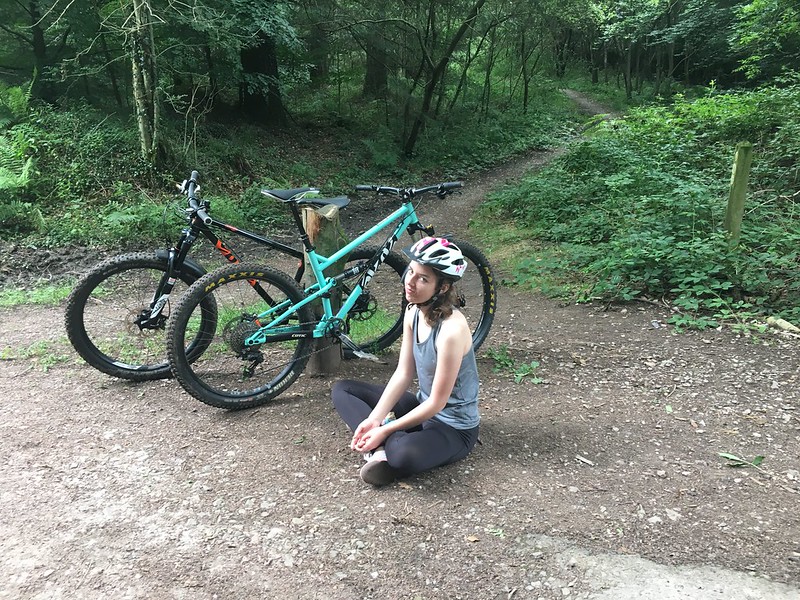 It was exactly two years ago when I last rode MTB with Jess. There are good reasons for this; firstly her rapid limb lengthening rendered her lovely XS Turner redundant. Unless she was considering a career riding BMX.

Not that such an option remained viable once I’d sold it. Needed the space in the shed. You snooze you lose. Besides that between the ages of 14 and 16, there’s lots going on in the life of your average mid-teen. In Jess’s case there was an entirely un-fatherly work ethic, a burgeoning love of dance, a cabal of smart friends and binge watching of whatever was trending on Netflix that week.

I missed riding with her, but being a selfish bugger riding was still happening a few times a week. Even when it’s not about me, it’s about recognising living vicariously through your kids is not close to proper parenting. Instead I was playing the long game waiting for a righteous Venn intersect of summer, a proper sized bicycle and an inventory of spares.

The latter came first. Due to the satisfying – if pointless – upgrading of the Mojo and a quick switcheroo of the Stache back to the configuration it first arrived in, a bench full of parts was missing only a frame and a set of bars* to ignite a Mary Shelley Dr Frankenstein moment.

Sorted via a 2nd hand frame originally sourced from the good guys at Cotic, a night at Matt’s where he created the mini monster truck while I fetched tools and handed him the occasional beer. The highlight of the build is, of course, that mudguard which I believe we can all agree is a triumph. Modesty forbids identifying the creative engineer honing his zip tie skills.

Tested on the Wednesday night ride. Quite the whippy go-kart even if a little small for me. That’s fine, it’s really not for me. However many times my riding buddies insisted it was. This, after I’d coached them extensively on the exact language to use if Carol frowned her way through a body count in the shedofdreams(tm).

Jess was understandably nervous at re-engaging with all things mountain biking. Even with truth shaded by parental pride, she was bloody brilliant. Sure the hills tested her limited stamina triggering those lying over the bars ‘pass the water if pure oxygen isn’t available‘ desperate hand movements.

She’s never been the best climber. Never really ridden enough. Bloody minded though especially after her only push was rapidly upgraded to energetic spinning when some lads appeared from a side trail. Girl-power right there.

We’ve ridden the Verderers trail in the FoD many times and while the end of it is fab, the rest of it can be a bit meh especially if you’re no fan of gravel. So we headed out into the forest proper, swooping through the valleys below the bigger hills, making good progress over steppy roots and encroaching vegetation.

Obviously while this is all about Jess, it’s still a little bit about me. Hence messing about in a bombhole which has been a constant trail companion for the last 10 years. Jess switched into the editor role to capture my enthusiastic if a bit rubbish attempts to get some air under the wheels of the Flare Max. Cotic and Chubby lock out today.

Nifty navigation bypassed some unloved climbs and presented us at the top of the final two descents. Gloves back on, seat post dropped, appropriate advice offered and ignored and we’re away. A berm marking the site of a previous crash ridden nicely without incident, and we’re into the final kilometre unlocking ice cream rewards.

Jess looks tense and stiff. She’s a bit scared. I know that feeling well but can only encourage from behind. It’s a rough trail tho and she gets thrown off line and off the trail. A desperate leg out connects with nothing but air which means gravity gets involved. No damage done other than an elevated heart rate for both of us.

Strangely this loosens Jess up. She’s riding really well now, pedals level, looking through the corners, tenseness exchanged for smoothness and a bit of speed. Enough speed for me to sit on a splintered mental fence between pride and concern.

I go with pride and shout the next two berms are no problem, even knowing both have caused the kind of fall pride is known to precede. She’s all good though if a little innovative with line choice and we’re home and hosed. Ice cream isn’t a fish finger sandwich, so we trade lunch choices and high fives.

Jess asks me if I like riding with her. Surely it’s a bit boring going so slowly? For such an intelligent young woman**, this is a pretty stupid question. I explain I can go chase endorphins behind fast friends 50 weeks a year. Riding with your offspring is something far more special. I loved every minute of it, more so because Jess seemed too as well***

She wants to go again once the soreness fades. That’d be marvellous. Maybe I need to work on her brother and mum as well.

I’ve lost so many family days to riding, and it’s always felt the right – if inexcusably selfish – call. Today reminded me there’s not so many summers left to ride with those in my genetic tribe. Not because it’s some kind of tick-box parenting, but because it’s absolutely bloody fantastic.

*Swerved the enduro wide bar zeitgeist for something a little more suitable. I was only off by about 100mm. Young women do not have 760mm shoulders 😉

**She gets it from her mother. Obviously.

***Except for some of the climbing. She gets that from me.

2 thoughts on “Parenting – the MTB edition.”