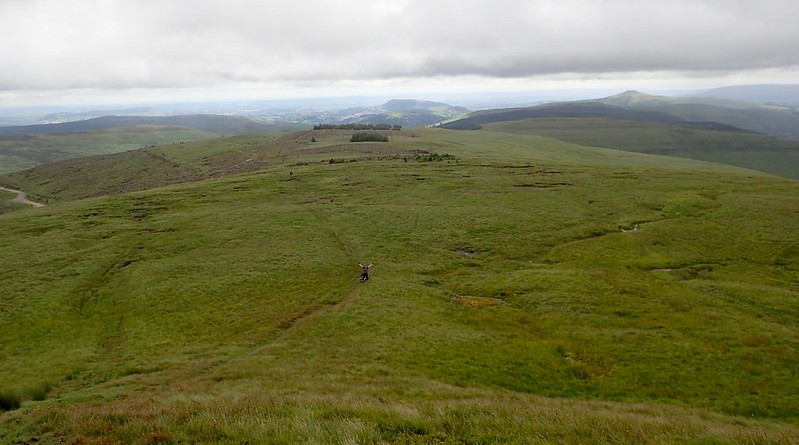 “These bikes Matt, they’re bloody amazing aren’t they?” represented my opening gambit on finishing a classic rocky Black Mountains descent. First ridden with almost no composure and much trepidation during a Dorothy-esque ‘We’re not in the Chilterns anymore‘ moment some ten years earlier.

Moving here rapidly widened my riding horizons and provided motivation for a lazy person to manage physical decline a little more aggressively. At 40, this stuff scared the crap out of me; steepish, loose, committing, switching between deep ruts barely clinging to a wind swept hillside, and stabby rocks buried deep into the water tables fall line.

At nearly 50, they’re nothing more than interesting technical exercises to be ticked off by thousands of practice hours, brilliant bikes and fast friends. Even after climbing through a rainstorm borne on a bastard headwind ramming droplets into every un-waterproofed* crevice.

Summer in the mountains then. Backside of a 30 minute climb drops you into a steep traverse cut deeply by eons of proper weather. Swirling wind attempts to throw you off the hill in the manner of an irritated horse. Whatever – ridden this kind of shit for a decade, been beaten senseless on multiple winter death marches, found courage in the strangest places. Roll the planet forward six months though and my insouciance would be replaced by tripod-ing uselessness and an all mountain dunking- but close to the longest day, just my laughter is carried away by that summer wind.

So when Haydn arrived sans a good part of his transmission, I was reminded of a couple of things; one don’t be a cleverdick – this isn’t a big mountain but it’ll still bite you in the arse if you install ego in the driving seat, and two just don’t be a dick period – you’re an insignificant pixel on a massive geological canvas. You’ve brought nothing and you’ll leave nothing. Get over yourself.

The rock strike cannoning through H’s rear wheel had blown away most of the mech and a couple of cassette cogs. Matt unleashed her mobile workshop on the problem while I lay in the first sunlight of the day and wondered why nothing makes me happier than being in the mountains. I failed to come to any useful conclusions other than high places were first claimed for the spiritual not the religious, the knowing that it’s a privilege to see the forests and the fields lying on top of nature’s wrinkly tablecloth, and that little bit of not being quite like everyone else my age.

My reverie was broken by the sounds of tools being re-holstered and we’re back to skating over loose rock, gliding under trees and – basically – finding fun bits go geography to punt the bikes off. It’s already been a hell of a day; going trail feral from the start so climbing for an hour with bikes on backs to crest a 450m ridge promising much fun back on the pedals. It didn’t disappoint.

Then laughing at Matt as he missed a steep exit only for him to repass me when I missed the next one. Eating jelly babies to the sound of pinging disc rotors. Arming the tyres with sheep shit ammunition ready to fire at the innocent bloke line astern come the next downhill.

There’s another 300m of almost vertical between us and home. Another push and carry which merely opened up the prospect of a further twenty minutes peering through the cloud base on mostly remembered tracks. My GPS read 35km and 1400m of climbing. Bit only 1050m of descending. Time to get home and hosed.

First ruts, then loose rocks, then a stream bed so everything south of the rear tyre is now pissing wet. But a little less covered in sheep shit. Dropping past the reservoir under stubborn slate grey skies, dampening our shadows all day, in no way diminished it’s ability to drag your eyes from the trail.

We’re nearly done but tired limbs must be ready for a single minute of action before resting in the van. Close the sheep gate, quick pedal ratchet, pick a line under an encroaching tree canvas and trust these awesome bikes to surf plate sized rocks long since wrenched from the bedrock.

Pick the bones out of that. It’s not scary nor technically that challenging. What is is is bloody fast, nearly 50kph of trail, forest and sky being hurled at the grinning idiot being the bars. Reminds me a little of reading the memoirs of the last ‘stick and rudder’ aviators flying by the seat of their pants.

It must feel something like this, not fighting the trail nor bending it your will, more modulating it through the pedals and the grips, micro drifting the bike into line, building a personal runway from random rocks and playing at being good enough to avoid a prang.

Roll up to the van with the conceit you’ve finally got this mountain biking thing pretty much sorted.At which point, a million midges feasted upon our moist persons. That’s nature having the last laugh, right there

*too warm to ride in a jacket so that’s everywhere then. At least it was warm rain.