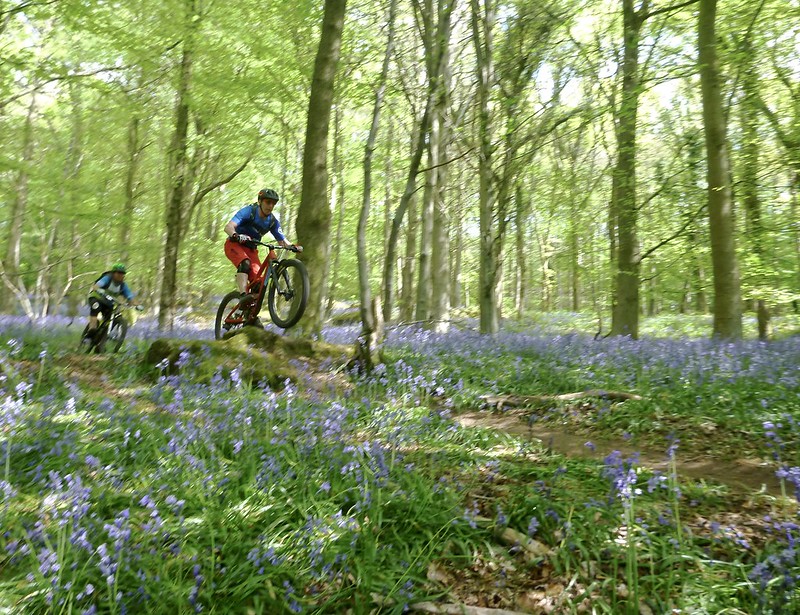 .. to understand exactly what it is you’ve left.* Riding in Spain was close to the perfect mountain biking holiday. Amazing location, brilliant trails, superb logistics, lovely hosts and great mates. All experienced through a prism of sunshine and dust. Except for the last day when it absolutely trouted it down, but hey that reminded me of home.

There is some resetting of norms out there. Back home we don’t average a daily 2,5000 metres of descending, nor suffer fatigued quads and pumped arms on trails bashing down rock conveyers for double digit minutes. Nor extended exposure with consequences from ‘that’d smart a tad’ to ‘we’re going to need an ambulance. And possibly a spatula‘

Wouldn’t it be brilliant to ride like that every day we asked and answered as afalling sun backlit the mountains, and we toasted the coming of the night with many glasses. 300 days of sunshine, a pace of life that has daily siestas baked in, and a startling lack of the avarice and bullshit whichpile up on our personal highways on this tiny, deluded Island.

Yes, and indeed no. Because even counting all its crap bits – and fuck me that’s a graph that’s gone exponential this last few years – there’s something secret, comforting and life affirming waiting for those of us attuned to the changing of the seasons. We almost missed this awesome show with our heads turned by muscular geography and bursting nature. Almost but not quite.

Dry and warm weather floweredbag-hibernated bikes into fully fledged trail-ready perennials. Short sleeves and shades were harvested from dusty luggage, and less than a week from the big mountains we were saddled and ready for one of my favourite events of the whole year: Bluebell day.

Sure the bluebells are not transitory in a single rotation of the planet but only a couple of weeks bookendfirst flush to sad wilt. We’d missed the first one but knew exactly where to get our fix of the forest at her most beautiful. First tho 10km of road, 9 of which had me obsessing over my manky hand.

Soon forgot about that as forgetting about the need to earn your turns proved to be ideal displacement activity. No uplift to haul us from the river to the not-very-high summit, but our destination was pulling at us like a benevolent black hole. First tho, a tramp down a favourite trail that was basically dust lightly attached to a concrete surface that may once have been dirt.

Not the rocks so closely associated with theSierra Nevada national park but still lumpy enough for my silent bike to be accompanied by ‘ow’ ‘OW’ ‘OW FUCK’ from the rider positioned at the back wishing he’d taken Matt’s offer of hacking the offending limb off and grafting some kind of SPD attachment to the bar.**

More displacement required. That’ll be the Buckstone then. A great trail in any month but come Bluebell day, the most spectacular spread of colours bisected by a snake of hero dirt. Riding it shouldn’t be this hard except the optics in your peripheral vision drag eyeballs away from fairly important stuff involving where the trail is and the trees aren’t. 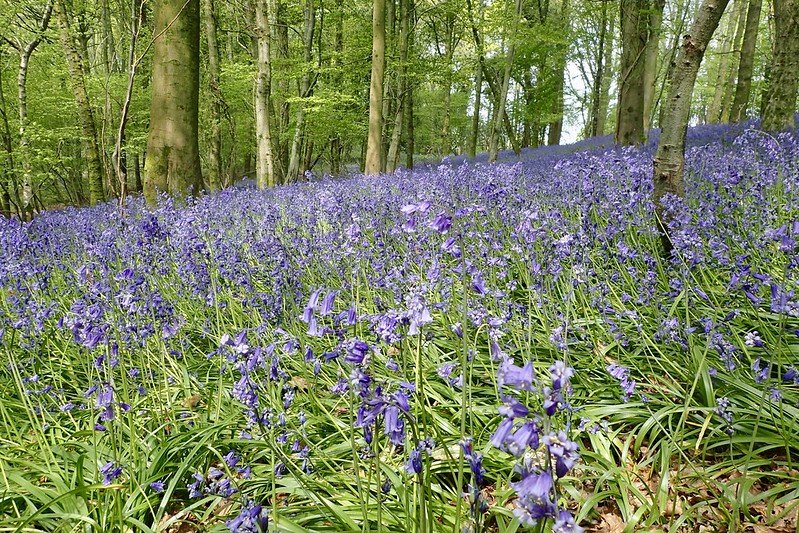 So you stop. Take pictures. Take some more. Digital memories never trump analogue ones. It’s a million times better being amongst it rather thanwatching it througha viewfinder. Still that kind of pretentious nonsense lasts exactly as long as one of the crew gleefully finding something to chuck themselves off. 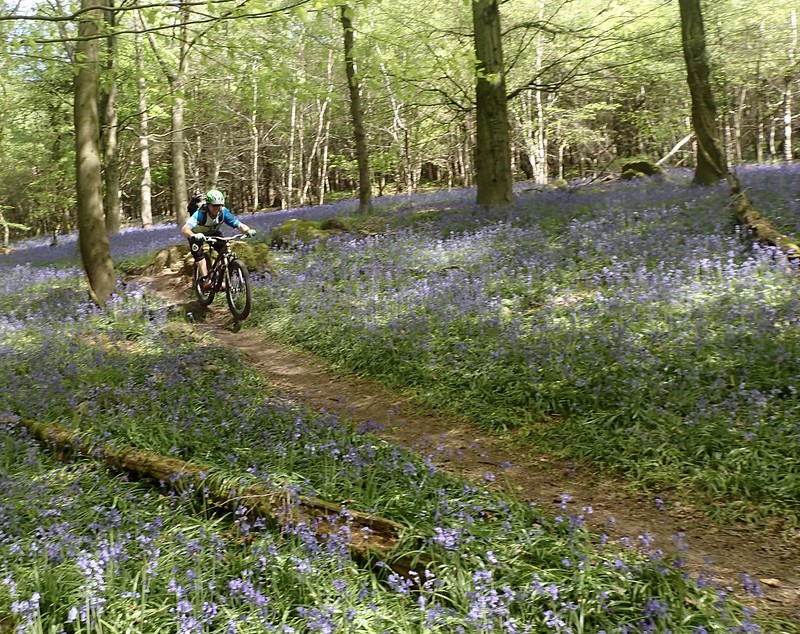 That went on for a while. Until the axiom of ‘let Al choose the trails, he’s injured‘ died in the fire of my previously supportive colleagues chanting ‘bunker, bunker, BUNKER‘. That’s democracy for you so bunker it was. Steep, rocky, occasionally terrifying. After a week in Spain and being tinder dry, it wasn’t anything but a top to bottom bloody good laugh. With just the odd sob from the man wondering if the physio might be on to something*** 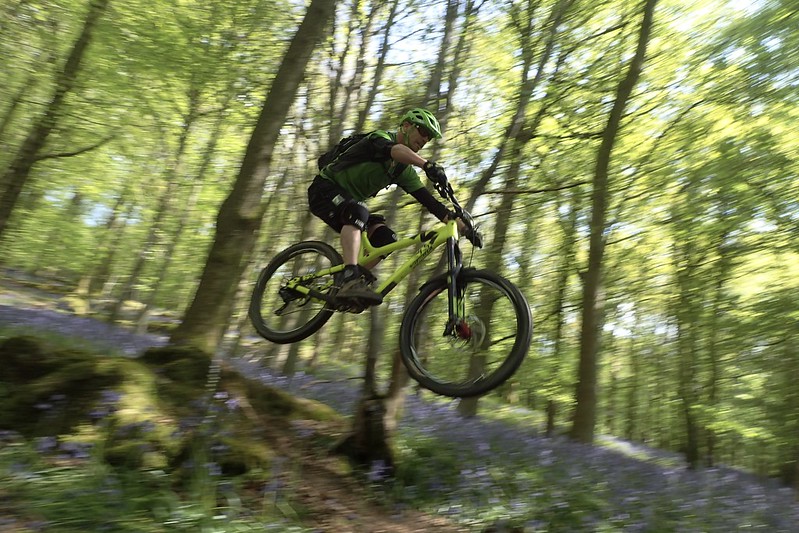 Then the pub. Sitting outside in the sunshine reflecting this is exactly what keeps us going in the seasons of grim. That and knowing bluebell day is coming. It never disappoints. And neither does coming home.

Adventures in other countries are never anything other than amazing. What’s rather special is finding the riding on your doorstep is pretty damn fantastic too. Maybe we’ll get another bluebell day tomorrow.

*I bastardisedthat quote from the novel Night Train to Lisbon. ‘We leave something of ourselves behind when we leave a place, we stay there, even though we go away. And there are things in us that we can find again only by going back there‘ – Pascal Mercier. If you’ve time to read this, you shouldread that. Or at least watch the film 😉

** that’s what passes as sympathy in our little riding group.

*** don’t ride for a month she said. Okay I said. I managed three days.